Akamatsu’s true founding date is unknown, but the oldest concrete date is sometime in 1791 in Fukuoka in a joint venture between two merchants, Tatsuro Akamura and Toyotomi Kagoshima. Akamatsu began production of handcrafted tools and weapons until Akamura’s mysterious disappearance in 1809, it has since become an urban legend among employees that the spirit of Akamura haunts any employee who dares dishonour or defect from Akamatsu, and is colloquially known as the “Anger of Akamura-sama.”, most employees who had supposedly angered Akamura’s spirit experienced a sudden downturn in their luck and personal affairs, and one case in 1975 of the disappearance and subsequent death of a former employee who had gone to work at Torrento Industries Ltd.

Akamatsu Motors was incorporated into the newly founded Akamatsu Group in 1988, and became a division in early 1990. Akamatsu Group is now a prosperous conglomerate building everything from computers to gourmet coffee makers, and even a mech in late 2019 under it’s Steelworks division, Isakawa-Daiichi. Since the end of World War II, Akamatsu Motors has had a long and fierce rivalry with it’s biggest competitor, Torrento Automotive, and although this rivalry appears bitter, it is actually quite friendly.

In 2002, then CEO, Hisashi Aishi (Whom was the only LGBTQ+ person to ever be CEO) purchased a brand new Torrento Sunblade, and in turn then CEO of Torrento, Geoffrey Alson, purchased a new Akamatsu Solaris as a sign of friendship between the two.

Little bit of D21, mostly inspired by a Pathfinder.

1998 Akamatsu Andromeda VLX V6; The luxuriously oversized Japanese boat that someone out there will inevitably turn into an average VIP kit build, but with a 2.8L Twin Turbo V6 as standard, this barge will give you a comfy yet thrilling ride, just make sure you know how to handle it, or you’ll be plowing into the guardrail on your mountain cruise.

a Twin Turbocharged V6 as a standard? Very nice, now I want to own one of those

a Twin Turbocharged V6 as a standard? Very nice

Granted, a straight-six of the same size would have been even smoother and hence more befitting for its role as a premium executive car, but it’s still one of the best uses of the Chaser mod body I have ever seen.

2001 Akamatsu Solaris SRX; Built for the track, under the hood sits a 2.8L Twin Turbo V6 found in the Andromeda, but tuned to now output 330HP, if you’re looking for a raw sports car that will most likely try to kill you, and you don’t want to buy a Torrento Sunblade, this is the car for you. 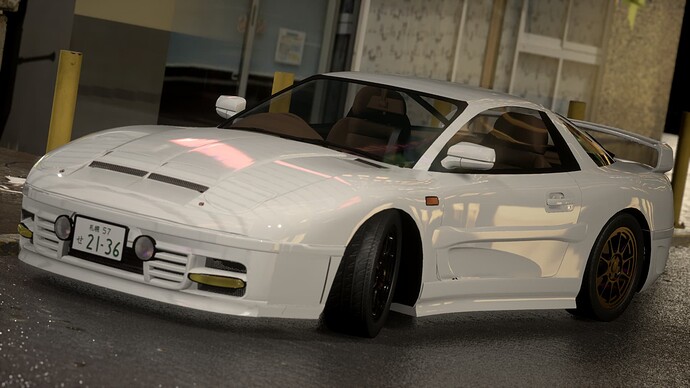 The Solaris SXR looks like a proper rival to my 2nd gen Madison Ballista (specifically, the base model 500 GT - the more powerful 540 GTS may well be in a different league entirely), at least on paper. Anyway, how fast is it (both to 60 mph and the top end), how much does it cost, and how much does it weigh? Also, is it AWD or RWD? In any case, it looks like a 90s/00s JDM tuner car should, both inside and out.

As for an explanation for that acceleration time: It may be that the Solaris SXR is quite heavy, which would blunt its acceleration somewhat - or it could be using the wrong tire type (medium instead of sports), or the trim shown has an automatic transmission instead of a manual, or some combination of all three.

The car weighs ~1200kg and the trim shown has a 5 speed manual with viscous LSD.

That would make it a formidable competitor to any 2nd-gen Ballista, then. It would be even faster and better to drive, though, with a 6-speed manual transmission with a geared LSD. Even so, the Solaris SXR deserves a place on every contemporary sports car buyer’s shopping list.

1995-1999 Akamatsu Kobalt 1.8LX; This is about as generic as it gets, with a 1.8L i4 making 108hp and a 0-60 time of about 11 seconds, it isn’t fast in the slightest, but at least you can take comfort in the fact that you, the groceries and your bratty children are safe and sound in this tangerine orange flavoured shitbox. 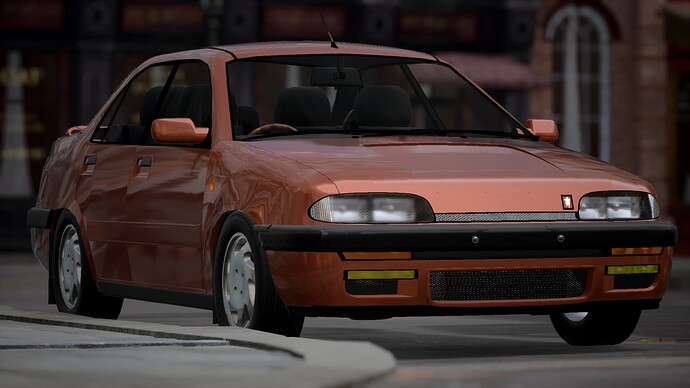 …and for the carefree parent, (or person, I don’t really care.) the Kobalt 2.0ZX and 2.0ZX Coupe, now with 130HP, you might actually get the kids to school on time for once, and it’s 0-60 time is a whole second faster!

In the coupe, you don’t have children, you just wanna have some fun on a shoestring budget, that’s alright, because nobody likes whiny kids anyways. Without the kids, you can actually enjoy your car. 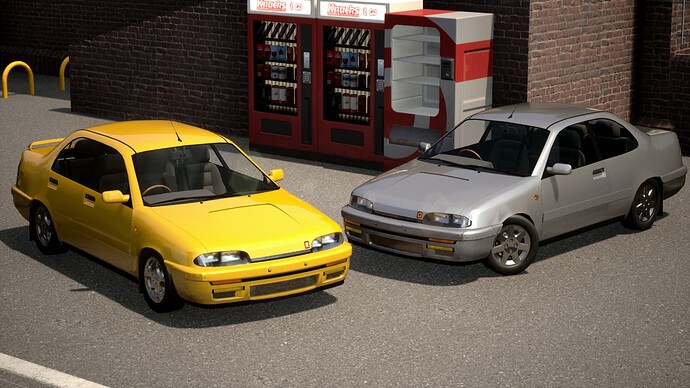 I really like this brand I must say. The Kobalt looks right for what it is, a 90s econo box, yet it has kind of a personality on its own, nice. Maybe the door handles feels a bit oversized though but other than that I actually like it.

Might I suggest some lower trim (LX, SX, ZX?) versions, aswell as an AWD facelift model that ditches the pop-ups?

2002 Akamatsu Solaris FRX-R5; Barely legal, but who cares when you got a 7 litre twin turbocharged V8 makin’ 900HP and almost 1000Nm of Torque under the hood. It’s still RWD, but now it’s wider and angrier than ever!

Fatter tires, new bumpers, shiny new rims and a wing you could hold a funeral on are really what makes this beast special, and that funeral? Prepare to be the one in the casket as this girl will try to kill you even more, maybe then you’ll remember to not trust that innocent smile so much. 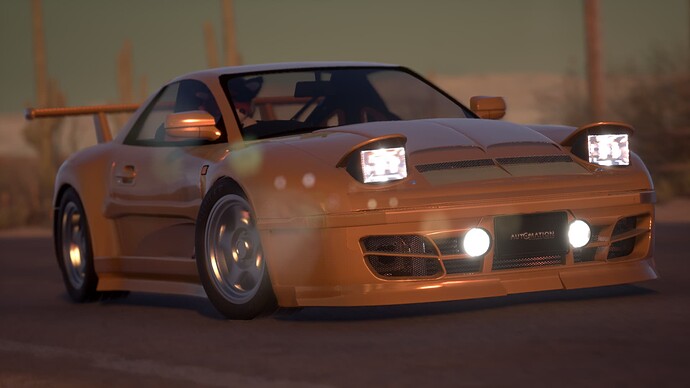 That seems… Dangerous. The turbolag has got to be insane, right?

Just mental. No wonder it would make a great drift or drag car - but only for those who can control it!