That thing actually looks too new for 1985 - although it wouldn’t be out of place in 1995, with its curvaceous lines and giant hood scoop.

This is just in case you haven’t seen my message @SenseiB12. My car had an automatic locker and I had no idea doesn’t export right. Sent you an updated file this morning. If I have to borrow a car that’s fine, but would like to use the vehicle I built (though maybe I’m biased haha).

More than a month later (I got lazy, my OS committed suicide, then I got lazy again) the video is in! 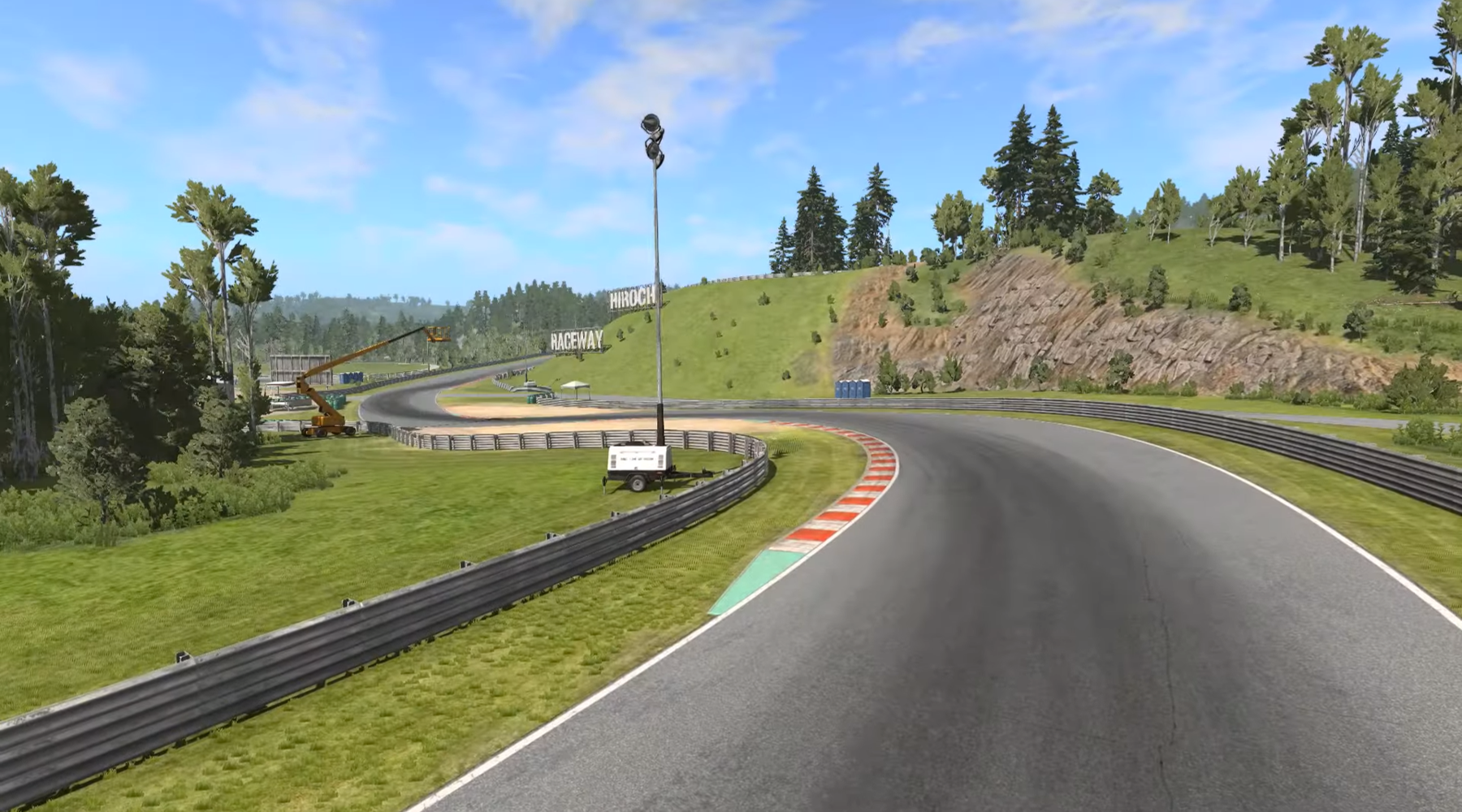 To play, you will need BeamNG, The BeamMP Multiplayer Mod as well as Automation. It is also recommended to download the vehicle mods ahead of time, which will be posted before the race.

Track: Hirochi Raceway, Medium Circuit. 6 laps. If you’re in freeroam, take a left at the first junction and a right at the second junction.
Heats: Maximum 6 cars per heat. Number of heats depends on number of participants.
Qualifying: Qualifying will be based on appearance poll! Top qualifiers will place into new heats first- EG the 2nd best voted car will be 1st on the grid in Heat 2, then 3rd would be either 1st in Heat 3 or 2nd in Heat 1 depending on the number of heats.
Schedule: Race is tentatively scheduled for 1:30PM US-CST on Friday, February 19th. Cars must be submitted by midnight the prior Wednesday!

Teams: One driver per team, and one or more car designers. You may be a one-person team. No driver or designer may participate in multiple teams. When submitting your car, include your Driver’s discord name (as this is what BeamMP uses) and control type (EG Steering Wheel, Gamepad, Keyboard).
Naming: Name your Model and Engine Family “ALR3-Username” and submit the .car file to me on the forums (not discord). Tag it ALR3 as well.
Schedule: To be included in the poll, and to give time for pre-downloads, cars must be submitted by Midnight US-CST on Wednesday, February 17th. The race will be in the afternoon the following Friday!
Pre-Download: When the poll goes up, I will make a download of all the BeamNG mod cars available. It is strongly recommended that you download them ahead of time instead of when trying to join the server. Mods go in your BeamMP\Resources folder. This will save a ton of time when joining the server, which could otherwise take up to 30 minutes!

It is 1982, and your manufactuter’s car will be competing the world famous Automagazine’s Grand Tourer’s Tournament. Prestige, fame, and sales await the brand whose car can win the title of “fastest GT car” on the track in front of the public. But, part of the challenge is that these aren’t purebred race cars, they’re driven on the track in the exact configuration in which they are sold from the dealership. In addition to being fast, they must be luxurious and fully featured. The tournament is only open to models produced in sufficient numbers, and which have already passed Automagazine’s stringent reviews of interior quality and driving comfort.

Year: Family and Variant 1982 or Earlier
Maximum Engineering TIme: 90
Max Displacement: 3cc per kg of total trim weight
NO Turbo
NO Race Parts
Minimum Quality: -4 on any part
Maximum Loudness: 26 (watch out, this is a tough one!)
Maximum Stress: 10% in any category.

-The larger and higher quality your interior is, the harder you can make the suspension while still meeting the comfort requirement.
-Service cost is especially affected by tire cost. Low profile and high top speed (175MPH+) are big contributors to tire cost. If you avoid these, you can afford some tire quality.
-Larger cars will tend to have a higher top speed because they are allowed more engine displacement and therefore power. Smaller cars can make the best use of the limited tire width for higher cornering speed. Larger engines are also easier to make quiet. I don’t know if that’s realistic or just an Automation thing, but keep it in mind.
-You’re allowed to use Premium fuel, so you probably should. You’re allowed not to have a catalytic converter, so you probably shouldn’t.
-Cars may originate from any country, so use your own judgement on visible safety features like blinkers, crash bumpers etc.
-It is NOT RECOMMENDED to model the interior of cars for BeamNG racing as this tends to add weight in beam and makes the model more complicated.
-Practice driving your car, and make tuning tweaks as you do so!

iirc interior fixtures dont add weight because they dont fall off in beam. something to do with not having a node. if the extra meshes n shit really tanks the performance n stuff then i get it

Will unleaded fuel and catalytic converters be mandatory? After all, in real life, they were… In the American market, but not Europe.

Does this refer to approximate cost as shown in the market tab?

Also, 90 ET for engine variants seems a bit low for the class of car we’re aiming for. Nor am I sure that a maximum price of $30k or a maximum ET of 100 for trims is high enough either. And <26 loudness is difficult to achieve without lots of positive quality points on the exhaust system.

In short, this is basically a budget mass-produced GT competition, with the emphasis on budget.

Are there any restrictions on mod bodies? 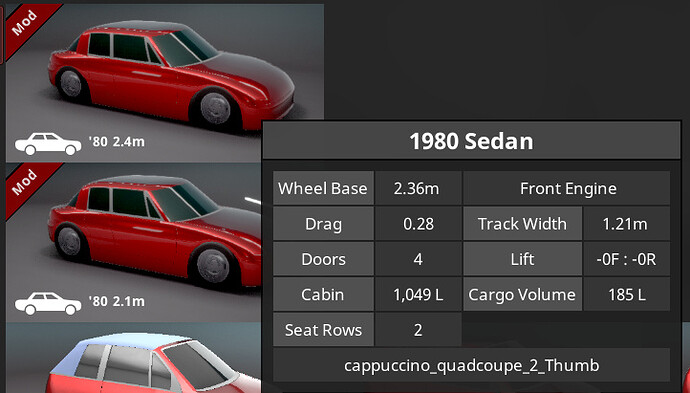 They seem too curvaceous for the era - car exteriors in 1982 tended to be very boxy compared to today.

is this OB or main branch?

Will unleaded fuel and catalytic converters be mandatory? After all, in real life, they were… In the American market, but not Europe.

Not required, as stated in the hints.

Does this refer to approximate cost as shown in the market tab?

In short, this is basically a budget mass-produced GT competition, with the emphasis on budget.

This does refer to the approximate cost in AMU on the market tab. I don’t intend to raise the budget; you can suffer.

Are there any restrictions on mod bodies?

It’s debatable if it’s era-appropriate but I’ll leave that mainly up to the voters. I think I’m actually okay with allowing the oft-banned Capuccino body on the basis that its preposterous aero numbers have no effect in Beam, and the cabin space is not totally absurd. The only thing that should make a mod body unfair for this challenge is very large cabin volume relative to the size of the body itself.

is this OB or main branch?

I’m using OB. If I recall, there was talk of pushing it into stable on Monday or Tuesday if things are going well.

No, except those implied by the market score requirement.

If it’s in the rules, you’re cool. Besides, I always have an ET cap and the only atrocities it’s caused are -15 quality in unimportant areas, which is why there is a minimum quality now. I never did have a ‘no meme cars’ rule though, and I dont intend to.

I’m afraid I have one rule to amend which I forgot to include originally: Maximum 10% stress on engine parts.

It would be a perfect job for a reengineered Lacam Roizon 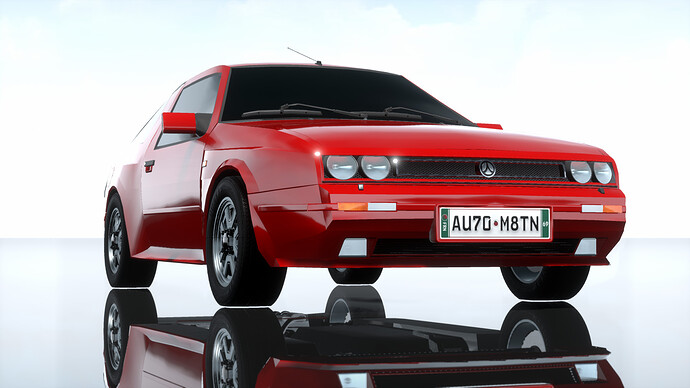 Update to the schedule: The race will take place 90 minutes later, at 1:30PM CST instead of 12:00PM. This should be the final schedule tweak.

It says Aluminium isn’t allowed but what about aluminium engines? As that doesn’t massively increase production units.