@ImKaeR in the Plastic Fantastic. This Family Utility car manages to come in at an amazing 815kg with partial aluminum panels and the… unconventional combination of an aluminum engine block and cast iron head. It’s an SOHC 4-cylinder making 112 horsepower at 7200 RPM (with a billet steel crank! which is odd but doesn’t seem to provide a ton of benefit). 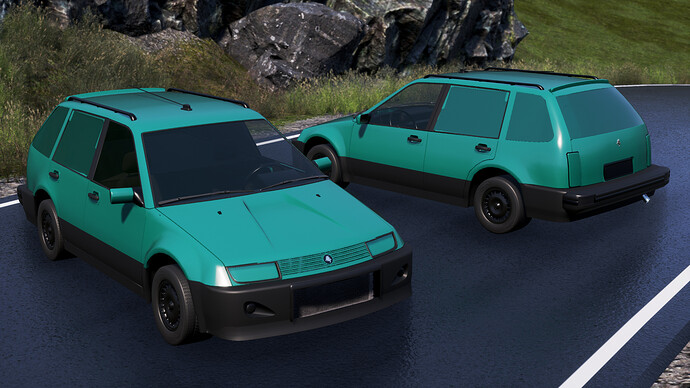 @B4nditOo in the Hussar V70 T5. This car had a 2012 engine (oops!) but B4ndit plans to submit a version which qualifies before race time. 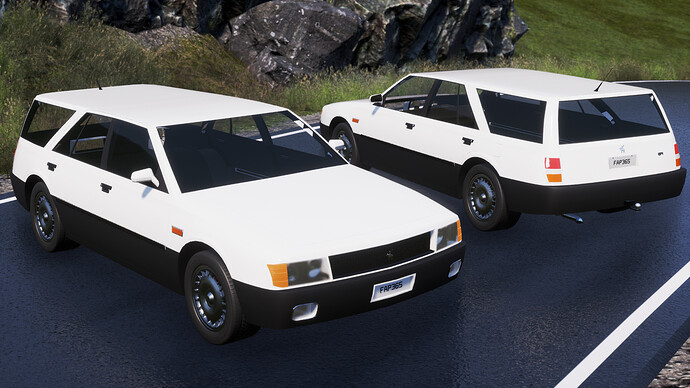 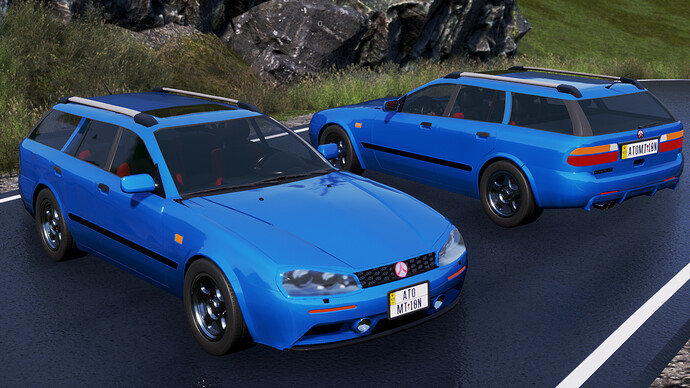 @Sealboi in the Genbrot Hotster. 1066kg of basic steel, but double wishbone suspension all around. Engine makes a whopping 140hp at 7500RPM (it’s pretty oversquare) with 100 cams, somehow still meeting gas and market requirements. It costs only 17500 too! 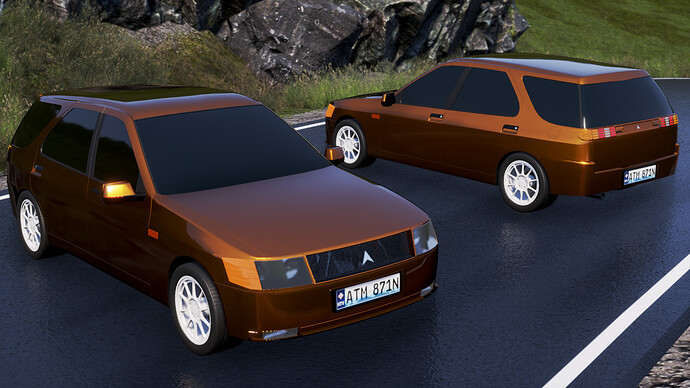 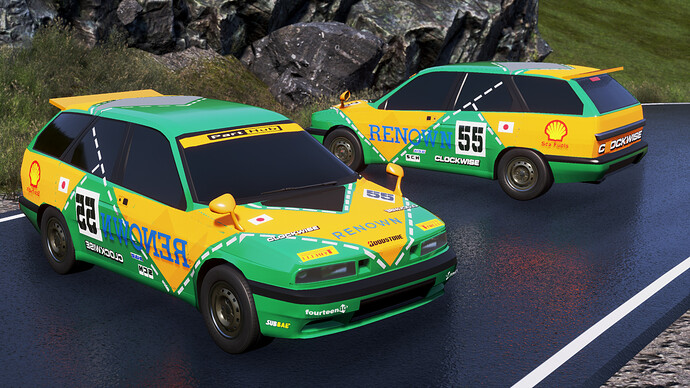 @nev in the Skrothog: This car weighs 975kg with plain steel and has another wild engine tune, a SOHC4-I4 making 150hp with the help of forged parts, ludicrous 11:1 compression and steep cams, and multiple throttle bodies. But… this one does a bit of a naughty! It meets the market scores by being a 1981 trim with a 1990 engine, basically meaning this car is modified and wouldn’t have been sold in this configuration. It’s definitely not in the spirit of the rules, which is driving cars at stock weight and power. Normally, I’ve always allowed rules loopholes, but I think this one is bad enough that I’m going to add 50kg ballast (positive safety quality) as a penalty. Without this particular exploit, the car would have to either make about 40 less horsepower or spend far more weight and budget on comfort and safety. 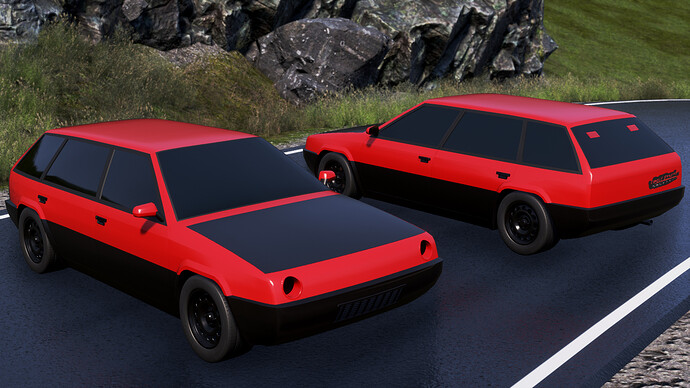 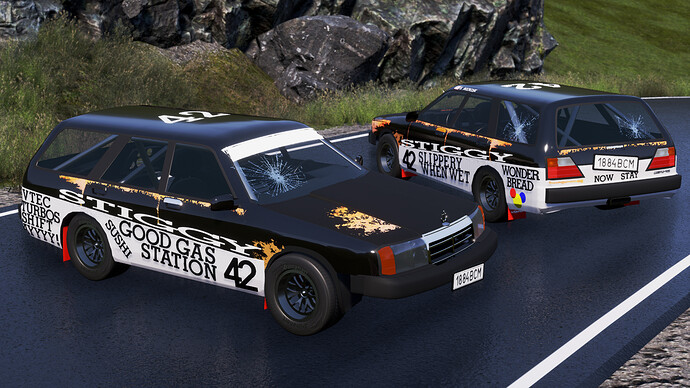 @TCup in the Knarr W.22: This car is dirt simple with four drum brakes, no power steering or ABS, although it does spring for an LSD. 960kg, 117hp rear-mounted boxer engine. Billet steel crank provides a crucial 0.1mpg to qualify. 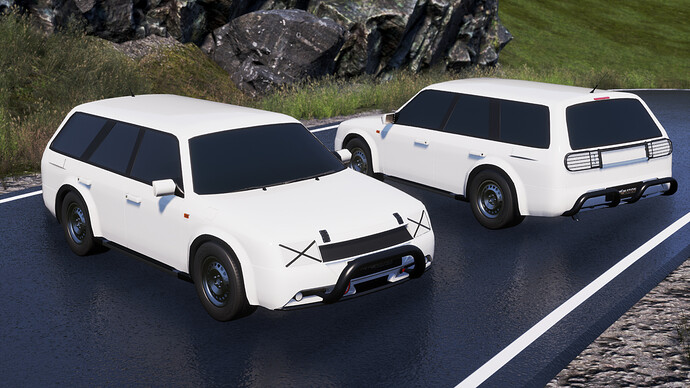 @bilobilo in the Kinden Falco: 1049kg, 110hp (with a 4-barrel carb). Gets 22.5mpg- in this case, the car’s power was limited by the need for market score rather than MPG directly. 5 seat premium interior, and a solid rear axle. This is probably one of the few cars here not reach for all the high-tech options. 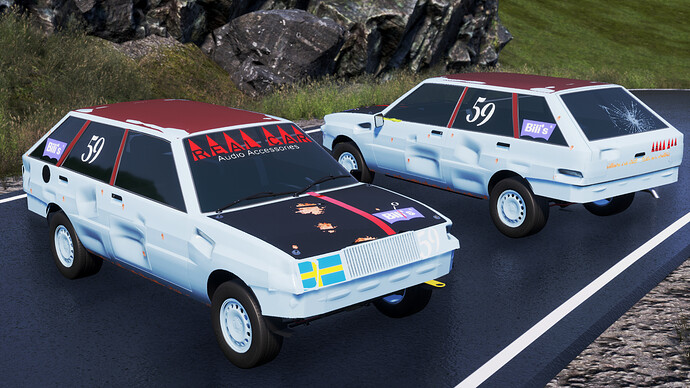 @pcmoreno in the Winthorpe Grackle 1.4. This is one of the few cars to go for Family rather than Family Utility, and it’s a 1980 model to make that easier (but, without a time-traveling 1990 engine). 932kg, 112hp. Open diff because you can’t get LSD’s in 1980. Creative use of the budget allows for +3 quality mag wheels. 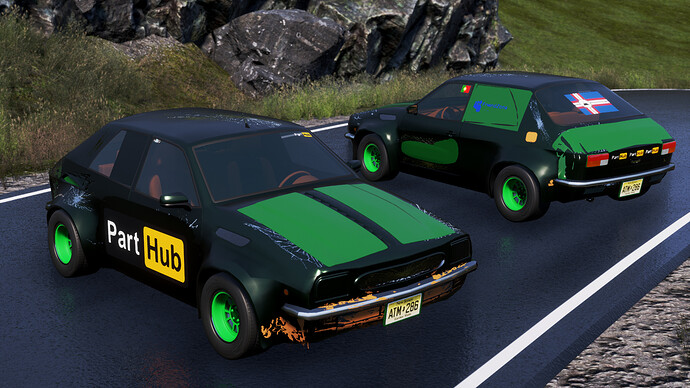 As usual, the dropbox files are in the OP! Remember to upgrade your KissMP to the new version!

A side effect of the rules I’m afraid! Family Utility is easier to shoot for. I might have toned down the requirement a little for Family to balance it out, but I also didn’t want it to favor lighter cars too much (and we still got most of the contestants under 1000kg when my test vehicles were more like 1150!) 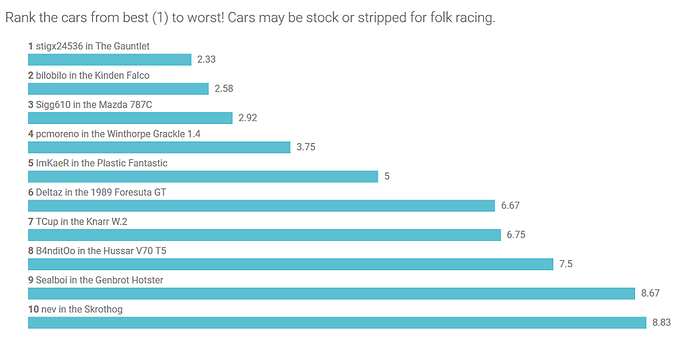 Congrats to Sigg610 on winning this one! That’s two in a row- I’ll have to figure out what the next theme will be. We had a very tense championship race here. I’ll have to finish up videos for the last two events, I think. I’m traveling next friday so there will probably be more of a delay for the next race.

To play, you will need BeamNG, The KissMP Multiplayer Mod as well as Automation. Details on how to install mods, and links to our discord and dropbox, are in the ORIGINAL POST. Note that we are using KissMP again, and you will have to re-download it with the latest update.

It is 1991, and you have been tasked with designing a sports car for the Kei market. In Japan Fruinia, Kei Cars are a special class of cars created by government regulation and tax incentives. These tiny, economical cars are provided with very large tax and registration discounts compared to full-sized cars, and they are intended to reduce traffic congestion, parking shortages, and emissions in cities. They’re also strictly limited in size, displacement, and power. In 1990, the regulations have been updated to allow slightly larger and more powerful cars, so now it’s time for your company to take full advantage. The regulations are at odds with the demands of sports car buyers, but there’s still a demand for cheap, sporty cars, and for any car to be truly it cheap it will have to fit the Kei regulations. Design your car in time for the upcoming first Kei category Fruinian Manufacturers Stock Cup, to prove your car is the best Kei Sport on the market.

Track: The race is on Green Coast Circuit, and each heat will be 4 laps long.
Contact: No deliberately pitting, brake checking, or ramming drivers off the road.
Heats: Maximum 6 cars per heat. Number of heats depends on number of participants. Most drivers should race in two heats; one qualifying heat and one heat to determine final position.
Appearance Poll: Qualifying will be based on appearance poll! Top qualifiers will place into new heats first- EG the 2nd best voted car will be 1st on the grid in Heat 2, then 3rd would be either 1st in Heat 3 or 2nd in Heat 1 depending on the number of heats.
Schedule: Race is tentatively scheduled for 1:00PM US-CST on Friday, May 14th. Cars must be submitted by noon the prior Wednesday!
Pre-Qualifier: (NEW) To prevent issues with users connecting on race day, EVERYONE MUST CONNECT TO THE SERVER BEFOREHAND. The server will be up after cars are submitted. Just join any time and say hello if I’m in Discord, or take a screenshot showing you’ve connected successfully. Most race days we spend 80% of the time dealing with getting people into the server so this should save a lot of time.

Teams: One driver per team, and one or more car designers. You may be a one-person team. No driver or designer may participate in multiple teams. When submitting your car, include your Driver’s name and control type (EG Steering Wheel, Gamepad, Keyboard).
Naming: Name your Model and Engine Family “ALR8-Username” and submit the .car file to me on the forums (not discord).
Picture: (NEW) Post a picture of your car in the thread when submitting. I will use your picture (or first picture if there are multiple) for the poll!
Schedule: To be included in the poll, and to give time for pre-downloads, cars must be submitted by Noon US-CST on Wednesday, May 12th. The race will be in the afternoon the following Friday!
Pre-Download: When the poll goes up, all the car files will be in the dropbox, linked in the OP. It is strongly recommended that you download them ahead of time instead of when trying to join the server. See the OP link for mod installation instructions in order to make them work with BeamMP or KissMP. Remember to download this and PRE QUALIFY BEFORE THE RACE by connecting to the server!

-Yes, you can make 63hp out of a 660cc engine without a turbo! Try dual cams and high compression. I3 is the obvious choice, though other engine types are viable.
-Because you have a maximum horsepower, the best engine is one which reaches the maximum as early as possible and stays there for as late as possible. You want a wide, flat power curve rather than a steep peaky one.
-Since your displacement is not tied to weight, make your car as light as possible while meeting the requirements. Slightly larger cars might be able to make up some of the weight with lighter safety/interior options.
-It is NOT RECOMMENDED to model the interior of cars for BeamNG racing as this tends to add weight in beam and makes the model more complicated.
-(NEW) DO NOT FORGET TO PRE-QUALIFY!!! I will bring the server up all day thursday!
-(NEW) Do not forget to post a picture of your car.
-We will be using KissMP 4.4, re-download it since last time was 4.3!
-Go to the original post and click the discord link if you need help!

COUNTDOWN TO SUBMISSION DEADLINE: DON’T BE LATE: ONLY 3 DAYS TO MAKE YOUR CAR!

30 comfort seems a lot for a small 90s sports car

After a little debate, I’m reducing Comfort requirement from 30 to 27. Take advantage!

btw, the fixtures from the misc tab, which is where most of the nice interiors fixtures are, add no weight on beam. 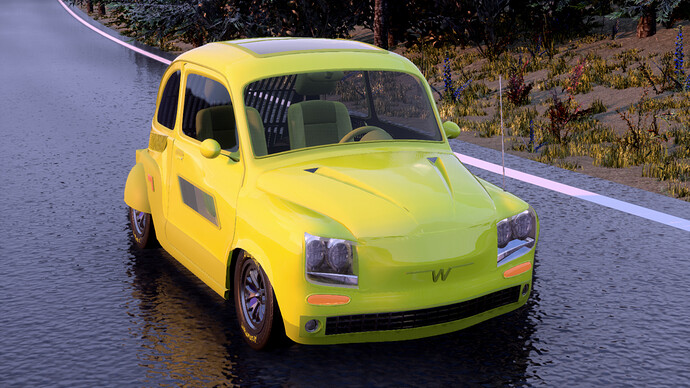 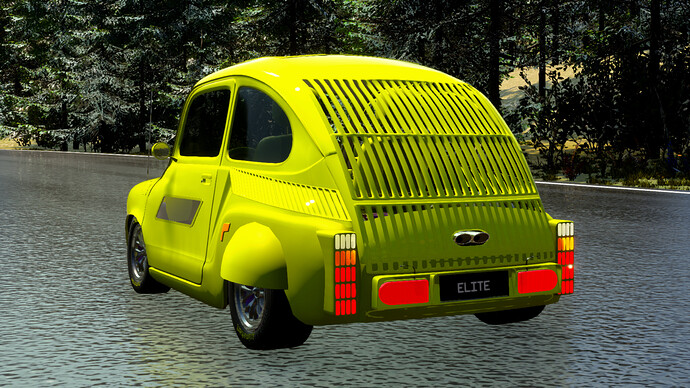 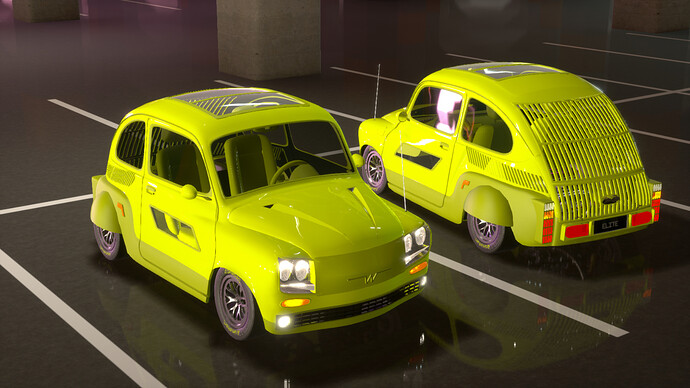 Once again, I’m behind the wheel of a car made by @replaY: the pretty Jedamo Riaku '91. 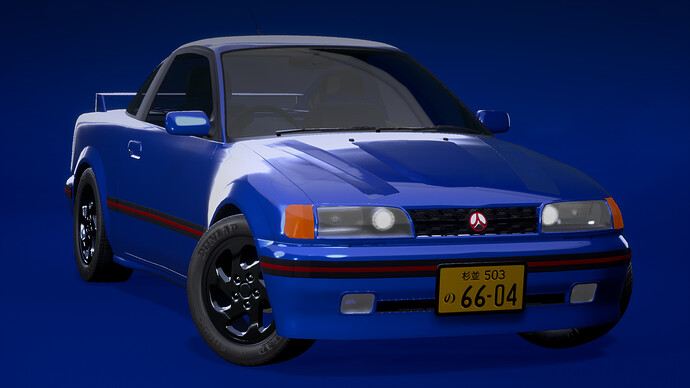 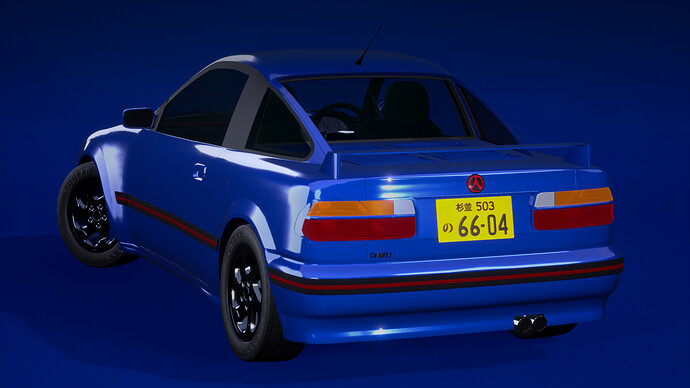 The GAA Ameri, the finest in minature american cars.

That’s not even a kei car, you just literally make a NASCAR lol

its a minature nascar

You can’t make a “miniature” NASCAR in Automation, that’s not how it works

it’s in spec what can i say 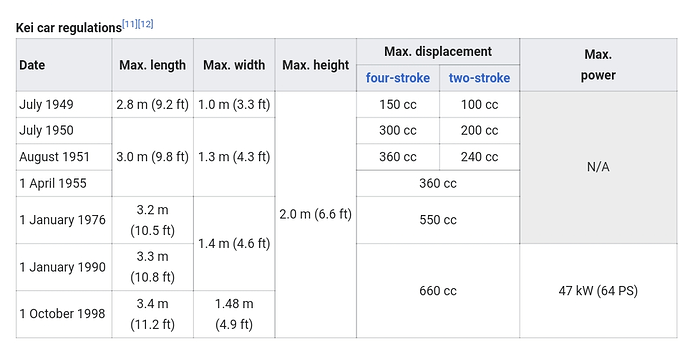 Submissions are closing soon! Finish up your cars if you’re working on them!

Hey, i wanted to know where do i find the car that i will upload
i am new in this forum haha, and also how do i make a pm