Another symptom to long engineering times for new cars

…is the game then precludes “events” like an oil crises or sudden regulation mandating a feature.

As a function of RNG, whatif the game mandates Advanced 60s safety on all cars sold after 1961?

The game already has the “must use unleaded fuel” event, and the nations announce it and give you a 5 to 10 year window to make the changes. In the 1973 oil embargo, the major manufacturers had to scramble to put something into production in response, and if the market sours on vehicles with fuel economy worse than a threshold, then these events could be an automatic game-ender if the player has to wait 36+ months to field a new model with a new engine.

Tinkering to the system is needed, because it isn’t possible to field “new” products “now”. I’m selling cars 4-10 years after they’re supposedly introduced, because that’s how long it takes to engineer them.

As a function of RNG, whatif the game mandates Advanced 60s safety on all cars sold after 1961?

There already are safety minimums after certain years based on the actual safety score rather than the safety option selected.

I maximized each trim for the market it was chasing. For the Premium trim, it was the first time an Infotainment was possible, and it was the highest score entertainment pick, so I picked it. At no point did I ever dial up the quality slider for any option - just the basic choices.

There needs to be a way to front-load these engineering choices - or to purchase the component from some 3rd party vendor, and then the component is just plug and play.

What I mean is, it’s 1961 and your fleet was just refreshed with facelifts / new models, and boom in April of 1961 the game drops a random event mandating effective immediately all new cars must have advanced 60s safety.

Which stops cold any of your cars that didn’t have that selected.

Because of the long engineering times, it would be a game-ender for most players.

The current engineering timetables present preclude these sort of game-changing random events from even being possible, because of the long lead times needed to shape a fleet.

10 years?! What the hell are you engineering, spaceships?

That’s how long it takes my in play. Even auto-generated cars do it unless I put funding up, a LOT.

@Hshan I didn’t realize you were one of the developers. In that case, let me give you more information about the Project I used in my example. 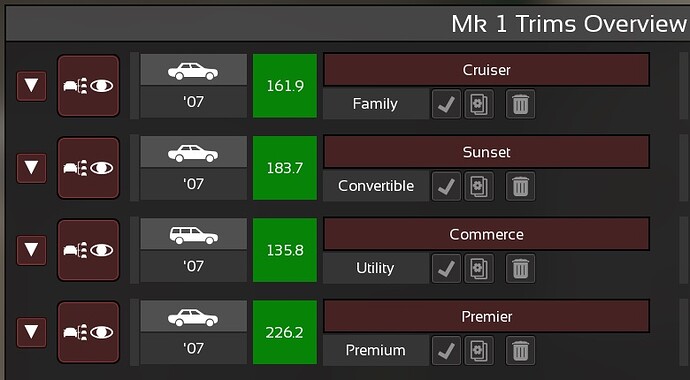 Here’s a frankenstein copy/paste of the spreadsheet for this car, all the choices the player could make.

All the rows correspond for the five sections; all of the first row are the “family” car, all the second row are the “convertible” car, etc.

Engineering times in campaign do get pretty long, especially in the later years. That being said, Im pretty sure thats because the lite campaign isnt exactly finished. Theres still stuff like engineers that havent been added yet, which were in the Kee build, which specialise in certain tasks that can drop the engineering time

And in reality, manufacturers do spend years on engineering each car. Those quick changes you mention were rushed facelifts, something you can do in the game. Yesterday I’ve seen that a facelift of my car with almost no changes could take as little as 7 months.

this is both correct and wrong. sure a new chassis is going to take a while, 2-5 years is common today. but you see most manufacturers are just iterating off from basically late 90s platforms. the game does a great job with new model engineering times, but it’s really off with “delta-engineering”, evident when you go compare actual car manufacturer r&d budget and how many models they spit off a common, “new” platform, which is actually mostly iterative revision of an existing chassis.

so take the bmw e36: in development with a new chassis 1981 to 1990: the body in 1990 wasn’t old by any standard. it also came out with 20something trims between coupe, wagon, station, convertibles x 3+ engine types. now try that engineering in automation.

and here’s the kicker: the e46 was a 5 year project, again with a buttload of trims. and that where automation fails: the e46 chassis is more rigid and has new suspensions elements and it’s longer; but you can’t do that incremental upgrade in a retrofit, to do that kind of improvement you’re going to need a new chassis.

so you’re locked with a longer project, or a chassis you can’t refresh and a body that gets a old body penalty.

and that’s mostly why people complain of being unable to follow real manufacturers in engineering times.

look at the C platform https://en.wikipedia.org/wiki/Fiat_C-platform - same chassis with 3 revision, used in 11 models and too many to count trims. and even then it was a light refresh of a previous platform, and you can trace it’s lineage in newer platforms as well. basically all fiat cars under 5 meters 1995-2020 are a retrofitted Fiat Tipo.

oh, and while chassis is the thing that mostly makes it difficult to track real engineering times, there’s plenty more:

first is the lack of standard between differentials, gearbox, abs, etc: those have all been outsourced components since a while now that use mostly standard parts across manufacturers, brands etc. to some more limited extents today even injection is picked, not engineered. look at the compatibility list for the c510 gearbox: https://fmautoeservizi.com/it/catalog/cambi-manuali/cambio-completo/fiat/cambio-manuale-5m-revisionato-per-fiat-lancia-c510-5-6615.html

another issue is the lack of standardized mounts and linkages. sure if every car gets it’s gearbox and diff you’re going to have engineering hell. that why most large company have standard engine mounts even across multiple chassis. in automation you pay engineering tax for every different engine in every car variant; but in reality that engineering tax is spent in the engine to put linkages in a standard scheme or in the engine mounting, so that it’s irrelevant to the car department.

another issue is that you cant branch off a platform - once they worked on the tipe C chassis design for the bravo, projects to build other cars on top of it where immediately started, and didn’t had to pay an engineering tax for the chassis. you can’t just reuse an existing chassis in automation, and familiarity is not enough to represent the amount of engineering saved by straight up using the same chassis project.

I can agree with just about all of this. I’m fairly confident that familiarity is supposed to represent all of this, but its effect is nowhere near strong enough.

I think what we want is something like “start with the stuff we already engineered, and only engineer the differences” whereas the current effect is more like “start from scratch completely, but take notes from the guys who engineered everything from scratch last time.”