Interesting analysis. I think I knew that having less cylinders would be an issue and still went for it

I have to pipe in. V8’s will be around for a long time yet and will have a place in future motor vehicles. That said I think the ls/lt/hemi approach to things will fade very quickly as smaller lighter turbo technology will have to be implemented by GM and Dodge to be competitive (look at ford, has been using DOHC v8’s for many years now and the coyote engine is just another step closer to a proper small displacement American made/style v8.

The issue is not fuel consumption of emissions, its the weight vs power produced compared to a v6turbo or 4turbo. Euro cars have been treading down the path of smaller and smaller v8’s for some time now and this is where the future of the v8 lies. Not in American/Australian muscle cars but high end European luxury cars.

The other side of the coin is diesel technology with Toyota leading the way here with the twin turbo Landcruiser but this will not last long as straight 6’s are simply much cheaper and easier.

Yup, non-truck V8 diesels are most definetely on the retreat. All three of the expensive germans used to have V8 diesels between the late 90s and late 2000s, only to abandon the concept again in favor of adding more turbos to their existing six-cylinder diesels. Toyota was late to the party in the first place, but is also beginning to phase out the 1VD on markets with tight emissions regs.
All hail our six cylinder diesel overlords.

And that’s one of the many reasons why I don’t win in the CSR, as I built a car following the philosophy of one of my companies and I ended up being surpassed for more extreme cars :B

With the half-exception of that turbo v12 tourer you submitted in CSR17, but I only say half because I know that engine was @phale’s handiwork

(I guess that it almost won really supports your assertion). This said it can be quite difficult to suspend disbelief when one asks for a reasonably priced civilian sleeper car and gets a v12 hot hatch with 420bhp (see: Dragawn, CSR1). That retails for 30k.

Tycoon mode will hopefully sort much of this, though it’ll be a real challenge to get the balance right.

The funny thing is, since I won CSR12/hosted CSR13, I have submitted a V12 for every round except KLinardo’s muscle car round. And I would have absolutely submitted a V12 there if muscle cars didn’t have to have V8s. It’s definitely interesting to go from turbo V12s to a 40hp OHV I4, haha.

In real life though, I personally have no problem with the trend towards downsizing and turbos. In my mind, the only practical downside to fewer cylinders is less smoothness. That’s why I’m such a big fan of the inline six, because it can be powerful, smooth, and efficient. BMW’s latest offerings can squeeze well over 400hp from a 3.0L I6, which I think is plenty enough power for any reasonable needs. Call me a weird car guy, but I’ve never felt any sort of visceral attachment to big engines. I won’t deny that V8s and V12s sound beautiful, but I’d rather take the engine that is cheaper, lighter, and more efficient any day.

Well, as long as the engine is still “large enough” for the purposes. There’s clearly a state where given a certain technology volumetric efficiency is maximised, same with running a certain amount of boost. Less cylinders is also simpler and cheaper to engineer. Expressed in this manner this is why @koolkei’s unusually large displacement i4s seem so successful in the Automation verse. That said it’s difficult to appreciate what a smoothness of 50 for a 3L i4 is like compared to a smoothness of 70-80 for a V12.

The other note is that having an AR ratio of above 1 actually quite significantly delays boost in favour of top end power, and it’s difficult to actually imagine what it’s like to drive that on the street (well, not really, it means you put your foot down and nothing happens for several seconds while the compressor struggles to overcome the backpressure). I note that a lot of cars with turbos currently run very high AR ratios, including cars with lower outputs for street applications. This is no doubt partly the product of the system that’s well known to need an overhaul, but still something worth remembering. 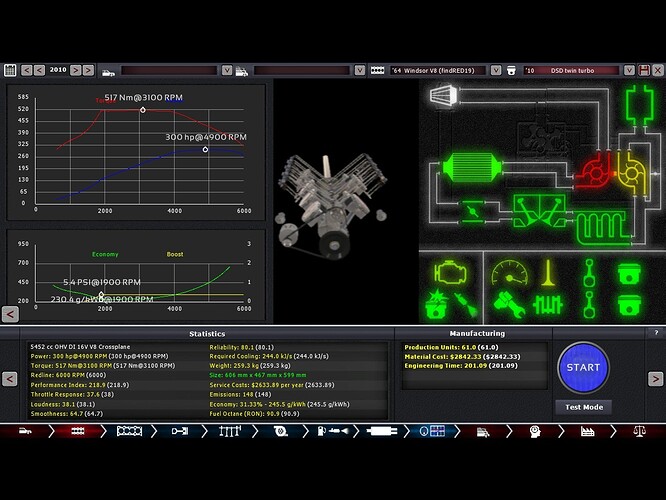