As shown in the Geneva Motor Show thread. 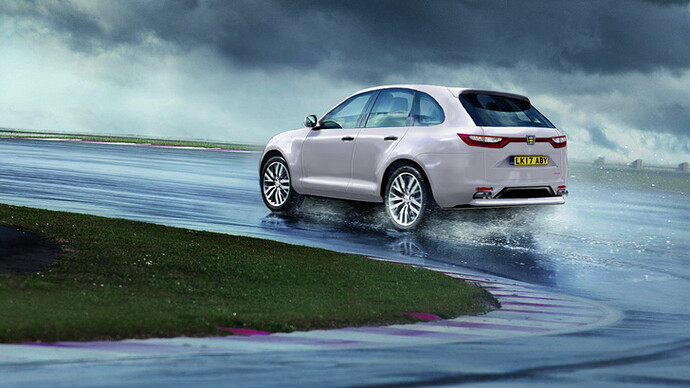 ######Credits to @titleguy1 for the photoshop
Powered by the same 2.0 inline 4 turbo engine found on the Quasar RS, producing the same 325 hp, which power all four-wheels via the same 7-speed twin-clutch gearbox, the Kilimanjaro RS is the car for those who need practicality, yet also want a fast car. 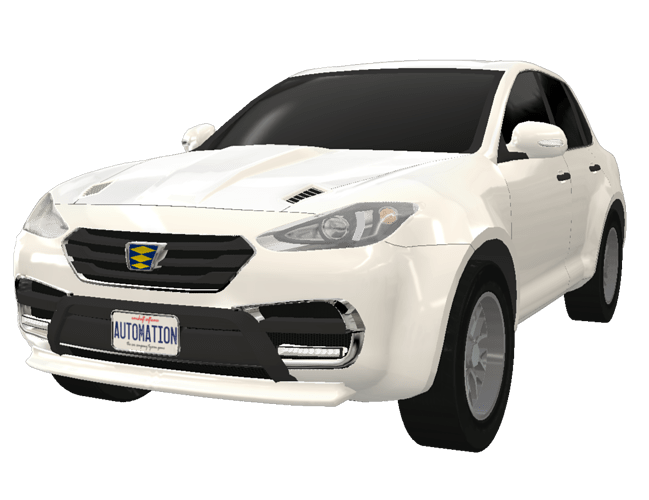 How fast? 0-100 in 5.3 seconds fast. Enough to get the kids sick in the morning, that’s for sure.
The RS comes with 19" wheels, designed to give extra kerb appeal, if not extra kerb proofing. The interior packs a 8.5" infotainment with satnav and bluetooth. 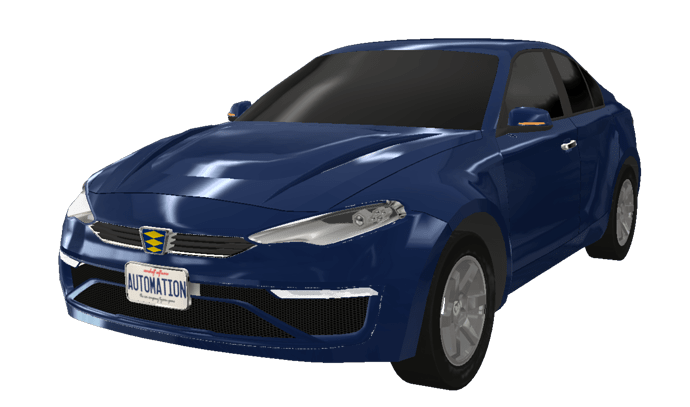 After the launch in late 2016, for the start of sales in early 2017, the Baltazar Quasar sedan range went on to win numerous awards, for both design and enginnering prowess. Due to the nature of the markets, the Quasar sedan will be mainly sold in North and South Americas and Asia. 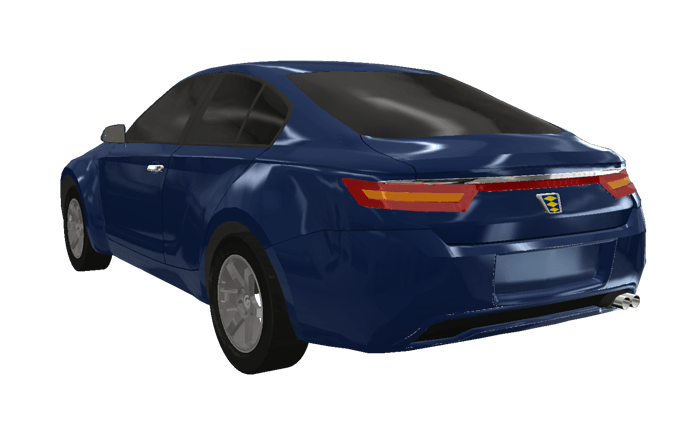 Due to the necessities of those markets, the only engine offered will be the brand-new 2.0 inline 4, always equipped with direct injection and variable valve timing and lift, in 3 states of tune: a naturally-aspirated 165 hp unit, and two turbos, one with 202 hp and the other with 325 hp, in the RS version. 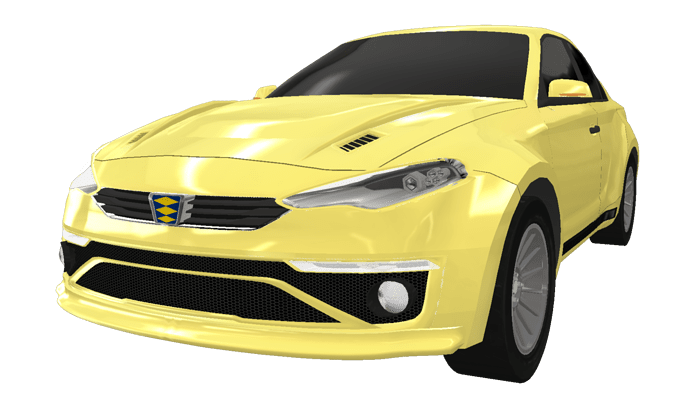 And, at least, here is the hot RS325 version, in sedan body, equipped with the 325 hp 2.0 engine, mated to a 6-speed manual gearbox or a 7-speed DCT transmission. 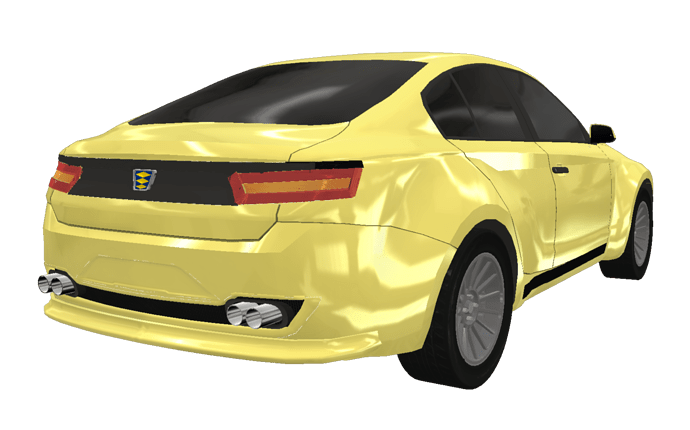 ###Feedback is welcomed and if you have any direct rivals to the Quasar sedan, feel free to post a small introduction and a link for the post the car is featured in.

Does the Kilimanjaro share a platform with the Quasar (albeit stretched)? That could explain why their dynamics are quite sporty, along with a whole host of other similarities…

Also, I still remember your first CSR-winning entry: the mid-engined, two-seater Zeppelin, which won CSR4 against some really tough competition. When, if ever, are you going to show it (or anything else from Baltazar other than the models and trims shown here) in this thread? Especially since I would like to know more about your company’s history.

And will the Quasar ever be offered with two or three doors? I have a hunch that it might look even better than it already is in those forms…

Edit: If any other users have named trim levels for a particular car model after chemical elements, please let me know.

Yes, they do share platforms, wheelbase is as close as it could be in the game. In my mind, they would share basic suspension mounting points and geometry (the most important part of it), all of the powertrain components, including gearboxes and a lot of the interior structure. Much like the Ford Focus and Kuga/Escape or Audi A3 and Q3.

As for the other three requests. You might see the full Zeppelin really soon (I had to delete the original file, but I’m planning on remaking it for CSR 39, if it gets done, it will be posted here). About the history, well, as I need the cars for challenges, or feel like making them, they will get posted here. For example, I think I need to remake the 1955 Basil.

About new Quasar bodystyles, you can see that the european range of engines and trims still wasn’t revealed. You also know there will be a motorshow in Anikatia really soon. Stay tuned 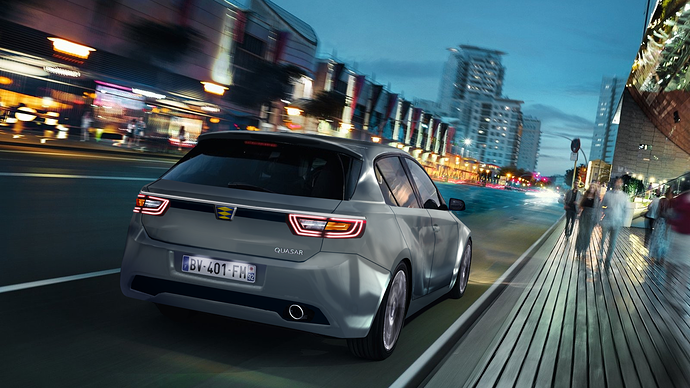 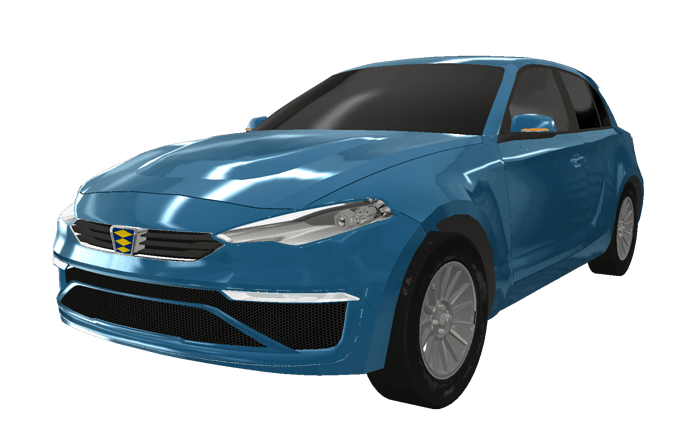 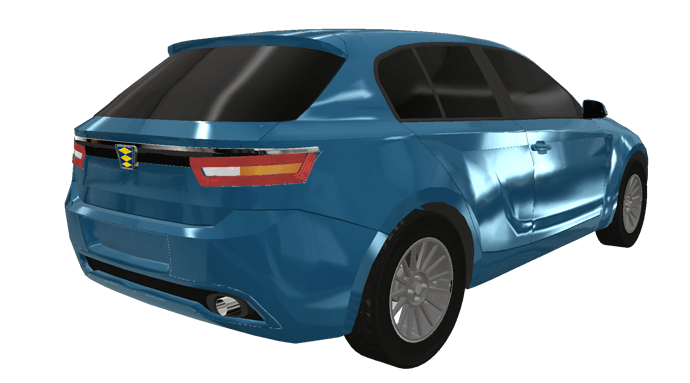 #Trim levels
As per the new naming system, the base spec car is the Nitrogen trim, which can be equipped with the 1.4 or 1.6 NA engines. It comes as standard with 16" alloy wheels, 3d-textured partial-leather seats and base level infotainment system, with a 5,5" screen, sat-nav, bluetooth.
Mid-spec Tellurium, which can be had with the 1.4, 1.6 and 1.6T engines, adds 17" wheels and a 7" screen with Apple Carplay and Android Auto.
Top-spec Lithium cars come with adaptive dampers as standard and have several improvements to the interior, including leather seats and an armrest for the front passengers. They can be bought with the 1.6 or the 1.6T engine.
The 2.0 GT gets unique bumpers, 18" wheels, vented disk brakes at the rear and a sportier, lowered suspension.
Meanwhile, the RS325 has a unique powertrain combination, with several modifications to enhance the handling and performance, as shown on post 2.
For the full stats, click the arrows below. 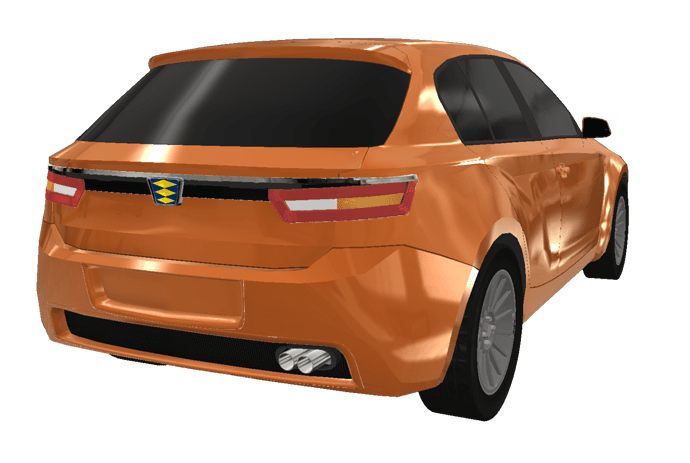 You… stop making good looking cars! Im about to start building up a sensible car company and competition is something I do not want or need! Now STOP BEING GOOD AT IT! >:U

Are myself, Saminda guy, Maesima guy, Zavir guy, and Dimension guy not good enough at designing
sensible cars for you to consider us competition?

Let me put it this way

Well, considering how incomplete is my lineup I think that “accepatble competition” is pretty good

I’m glad I missed that list. Means my cars are indeed insane enough to not be considered sensible at all. 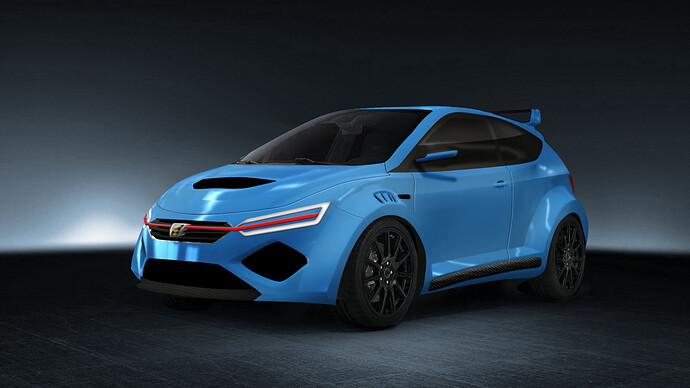 First shown at the Goodwood Festival of Speed, this concept previews the next generation model general look and feel, but with some extra spice added, to highlight the fun to drive aspect of the Quark. Which, as the cornerstone of the Baltazar range, has across its many generations always been a practical, affordable, comfortable and fun to drive supermini, making it one of the best selling cars of this segment worldwide. 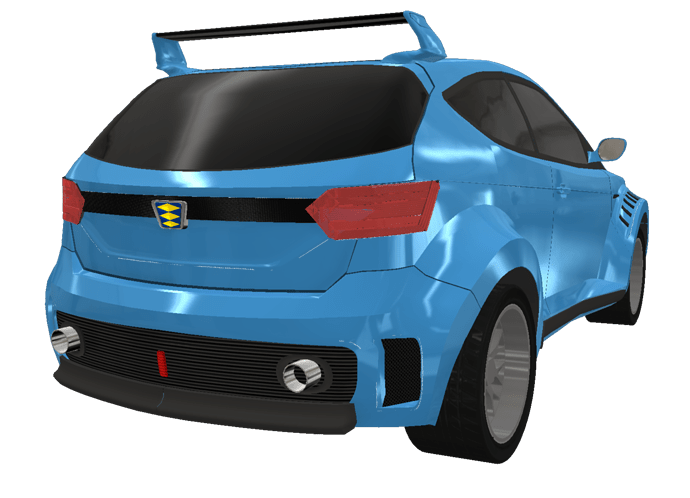 The 2.0 inline 4 engine from the Quasar has been further reworked and boosted, to produce an insane 530 hp. All that power is fed to the front wheels only, through a 6-speed manual gearbox. That much power, in such a small car, makes for insane figures. 0-100 is dealt with in 4.8s, top speed is 303 kph and the standing quarter is taken in 12.3s, with a trap speed of 211 kph.

It was able to tackle the Goodhill climb in just 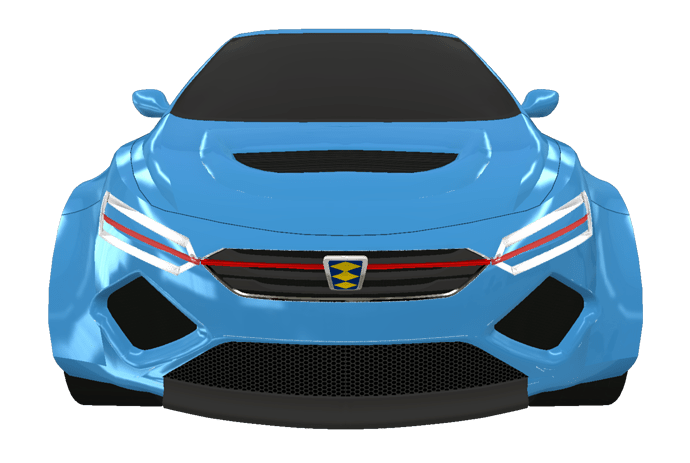 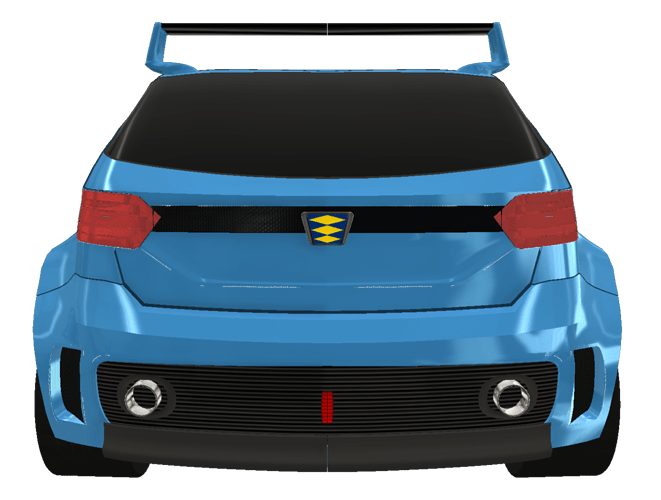 Expect the all-new 2018 Quark to reach the showrooms soon.

It only took me two years to realise that this staple would actually be a near direct competitor to one of my main cars of another company whose page I haven’t written yet.

I should be scared.

After the RS530 concept previewed it, here it is 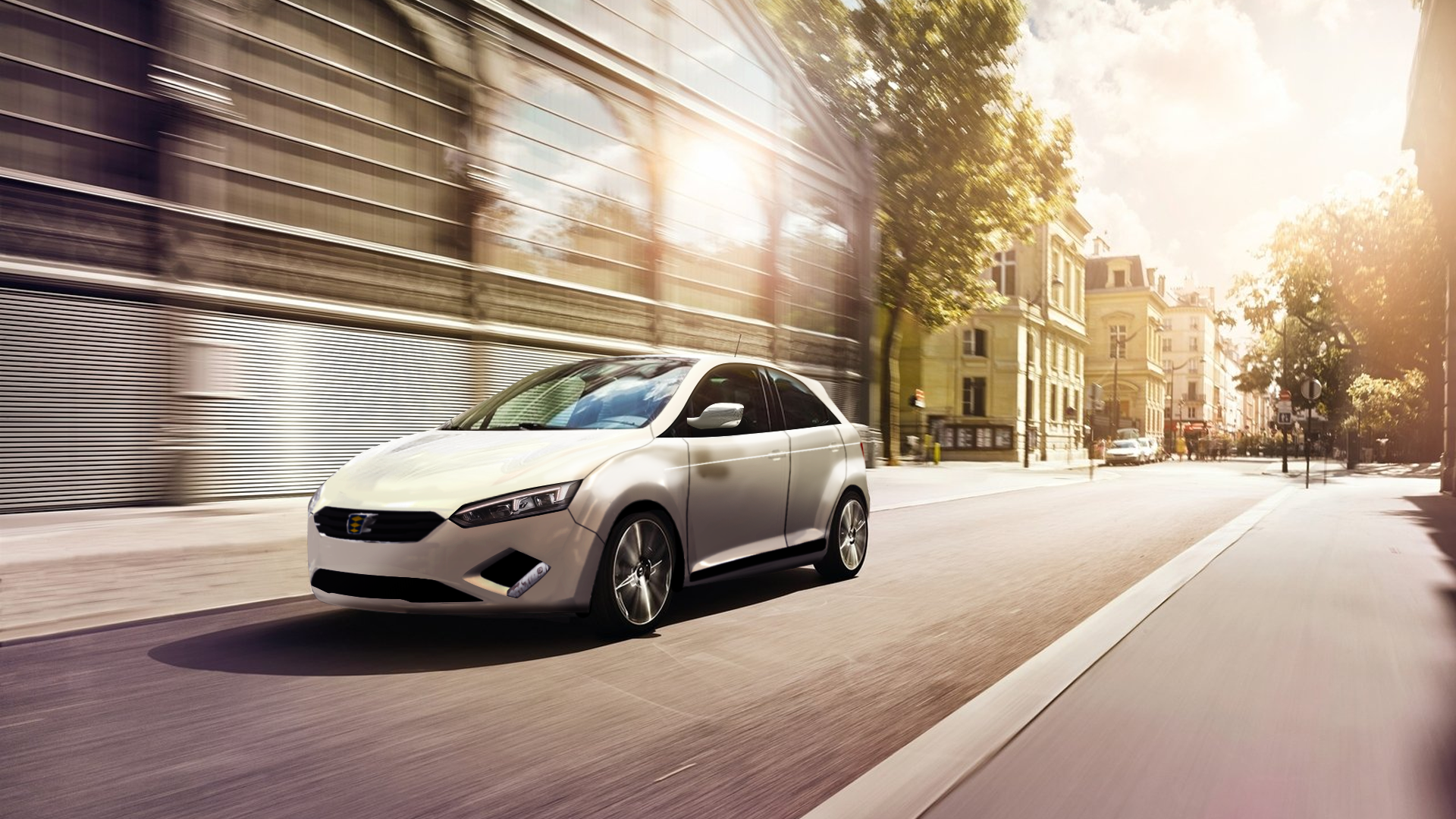 Here it is, the car that defines the supermini/subcompact market. Fun to drive, practical, economical, easy to drive, good looking and affordable. The Quark is proof that you can have your cake and eat it and, on this new generation model, that statement has only become more true.

Buidling up on the strengths of the predecessor, the car has extra high strength steel on its structure, for better torsional rigidity and passenger cell stiffness, where as some of the panels are composite, like the front wheelarches, bootlid and roof, in a quest to save weight, which in turn aids handling and fuel economy.

The car will be sold from launch with 4 different engine options, a 1.0 3-cylinder with 70 hp, two 1.4 engines, one NA with 100 hp and a turbo-charged 125hp and a 1.6 turbo with 150 hp. A sportier GT option will come soon afterwards.
All cars are equipped as standard with a 6-speed manual gearbox, with a 6-speed DCT being offered as optional on the turbocharged engines. 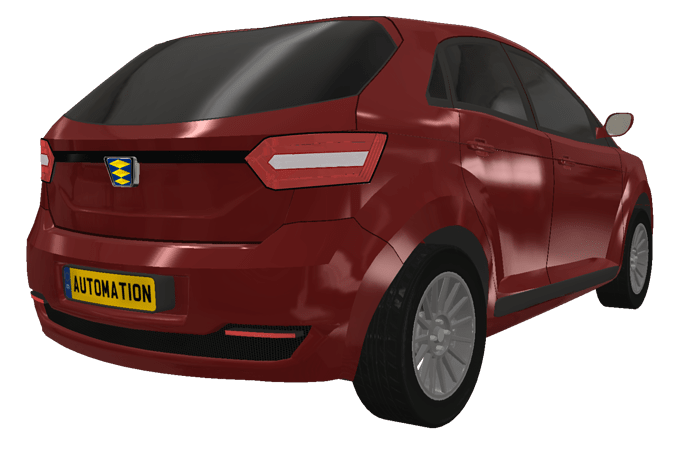 Trim levels (click on the arrows for full stats) 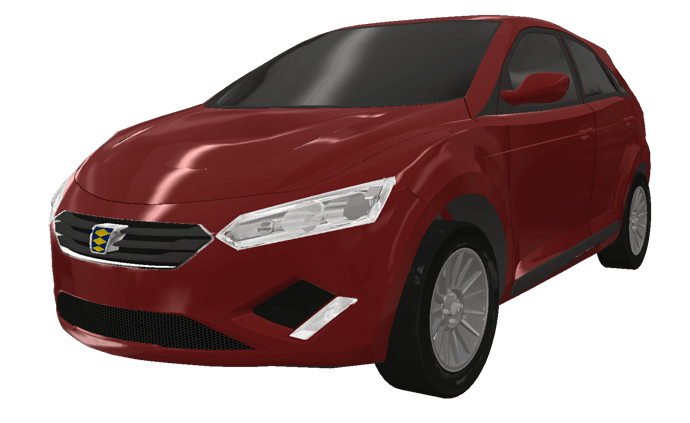 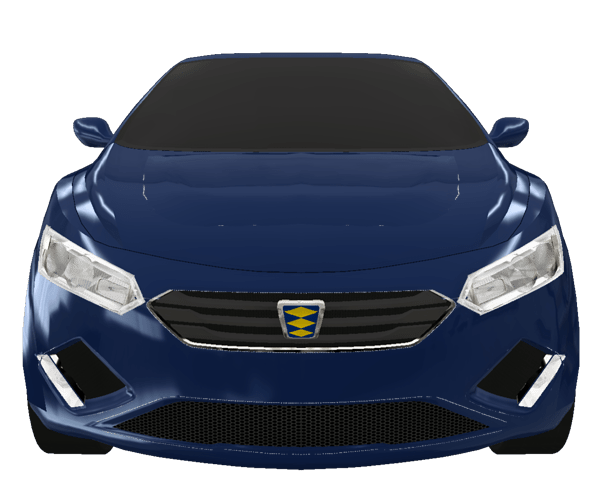 Really love the design, striking without being too strong. Really love how you did the rear bump too, might have to steal some ideas with that! 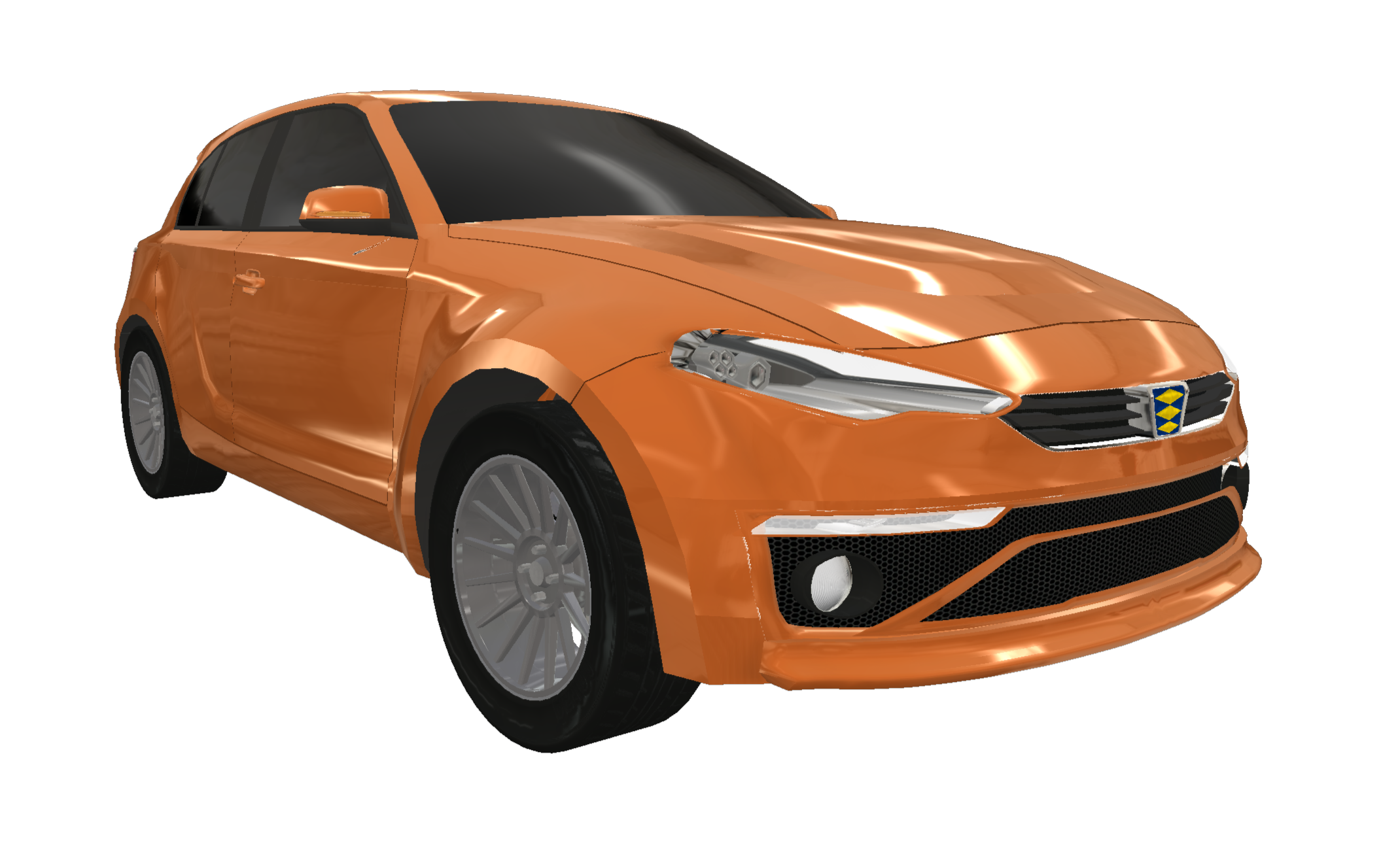 Designed to be closely related to the ATCC race car, this new version has all the poise and lightness from the FWD design with several race-derived updates. Power is up from 202 hp to 277 hp, still driven through a 6-speed manual gearbox, albeit with a limited slip differential this time. Uprated brakes, tyres and suspension, derived from the RS325, are all present too.

Performance has been enhanced massively, with the big numbers being 6.2s to 100 km/h and a top speed of 262 km/h. That is partially helped by the weight savings of kg fro mthe RS325, down to 1524 kg. 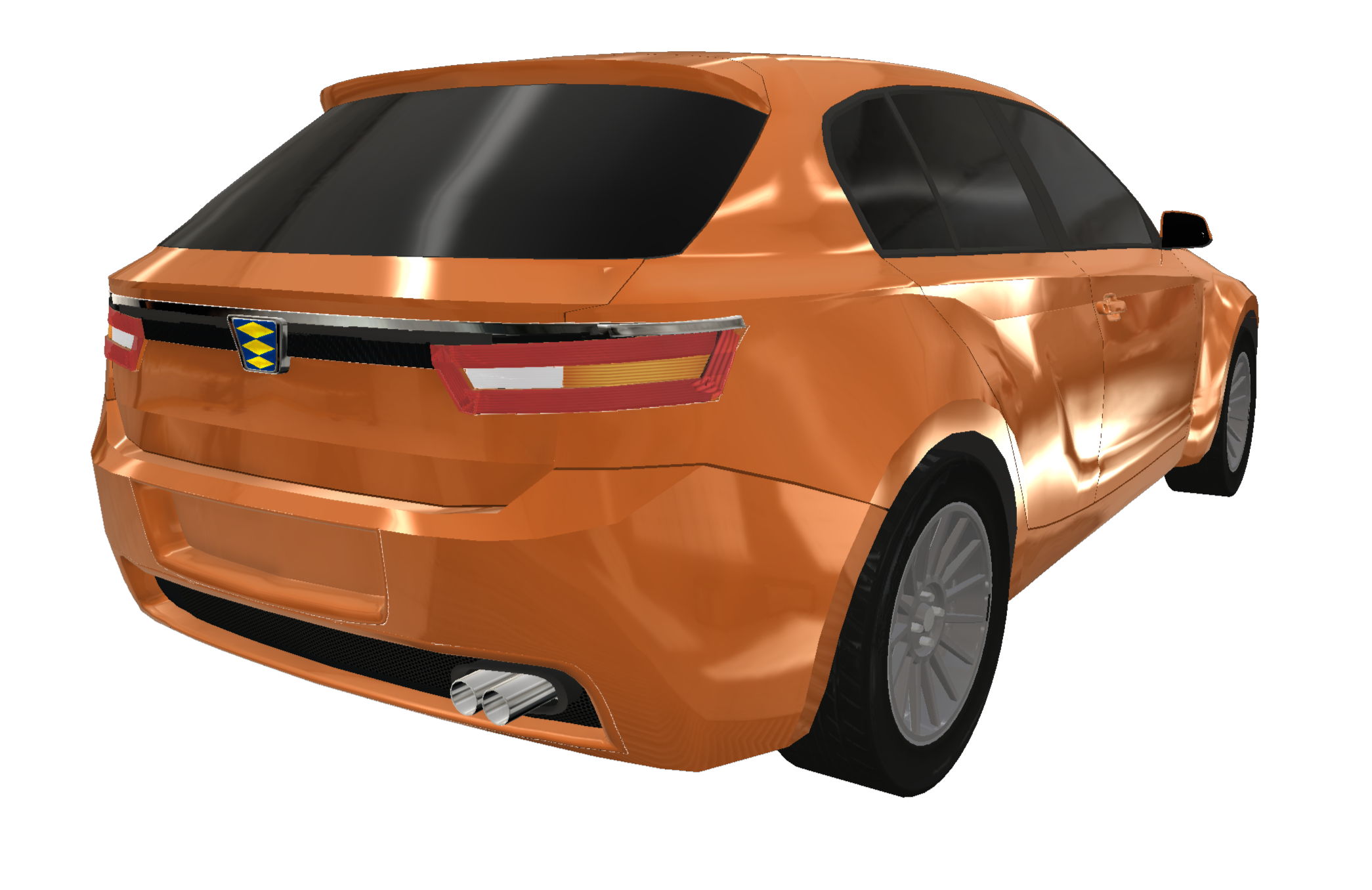 The car was first shown on the Frankfurt International Autoshow

After quite a while without revisions, the mid-engined sports car has been revisited and improved across the board. The all-aluminium chassis and independent suspension all-round remain, but the styling is new, and so are the engines.
Using the new inline 4 engine family first introduced in the Quasar, the Zeppelin brings new levels of performance and driver engagement. The range is comprised of three tunes of the 2.0 motor, the base naturally aspirated model, with 165 hp, and two turbo units, with 277 and 321 hp. 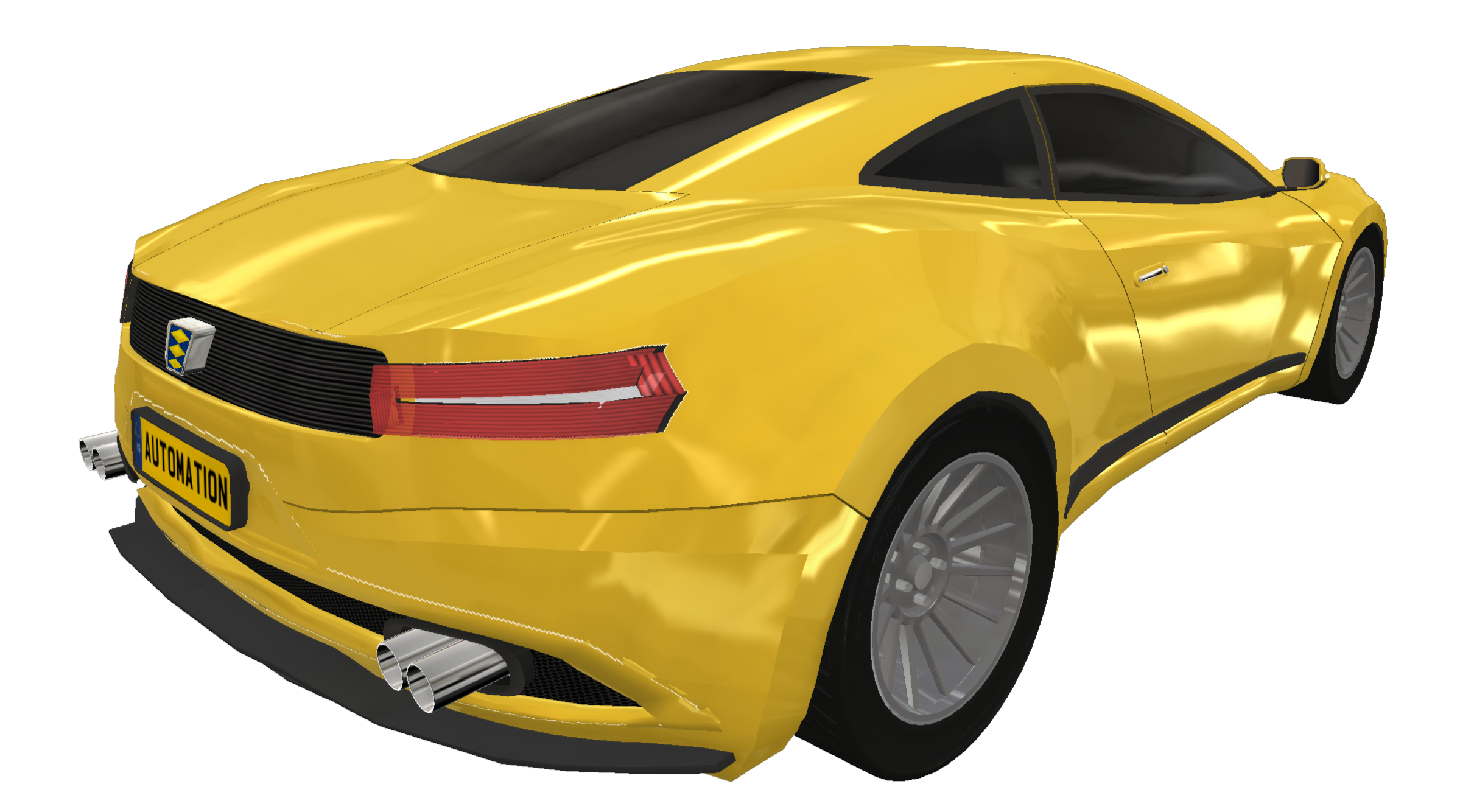 Combined with the lightweight chassis, the car is capable of some impressive performance numbers, with the range topping Helium model capable of 0-100 in 3.8s, for a quarter mile time of 12 seconds and a top speed of over 300 kph. However, due t the sporty suspension and lightweight, the car can also corner really well, doing a lap in the ATT in just 2:11, only 2 seconds slower than the 200 hp more powerful Bonham Chaucer Brooklands. Further details for all trims are shown below. 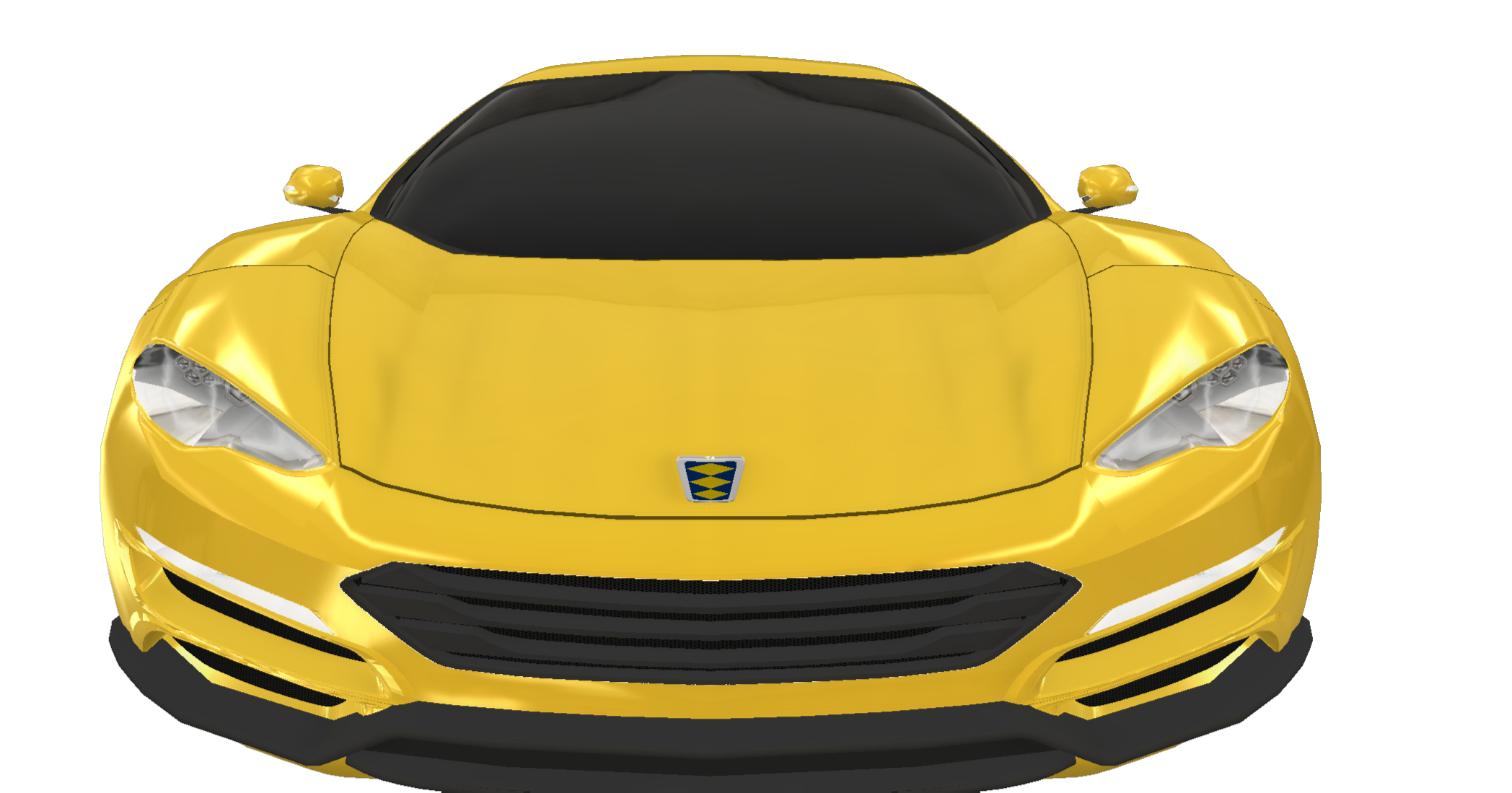 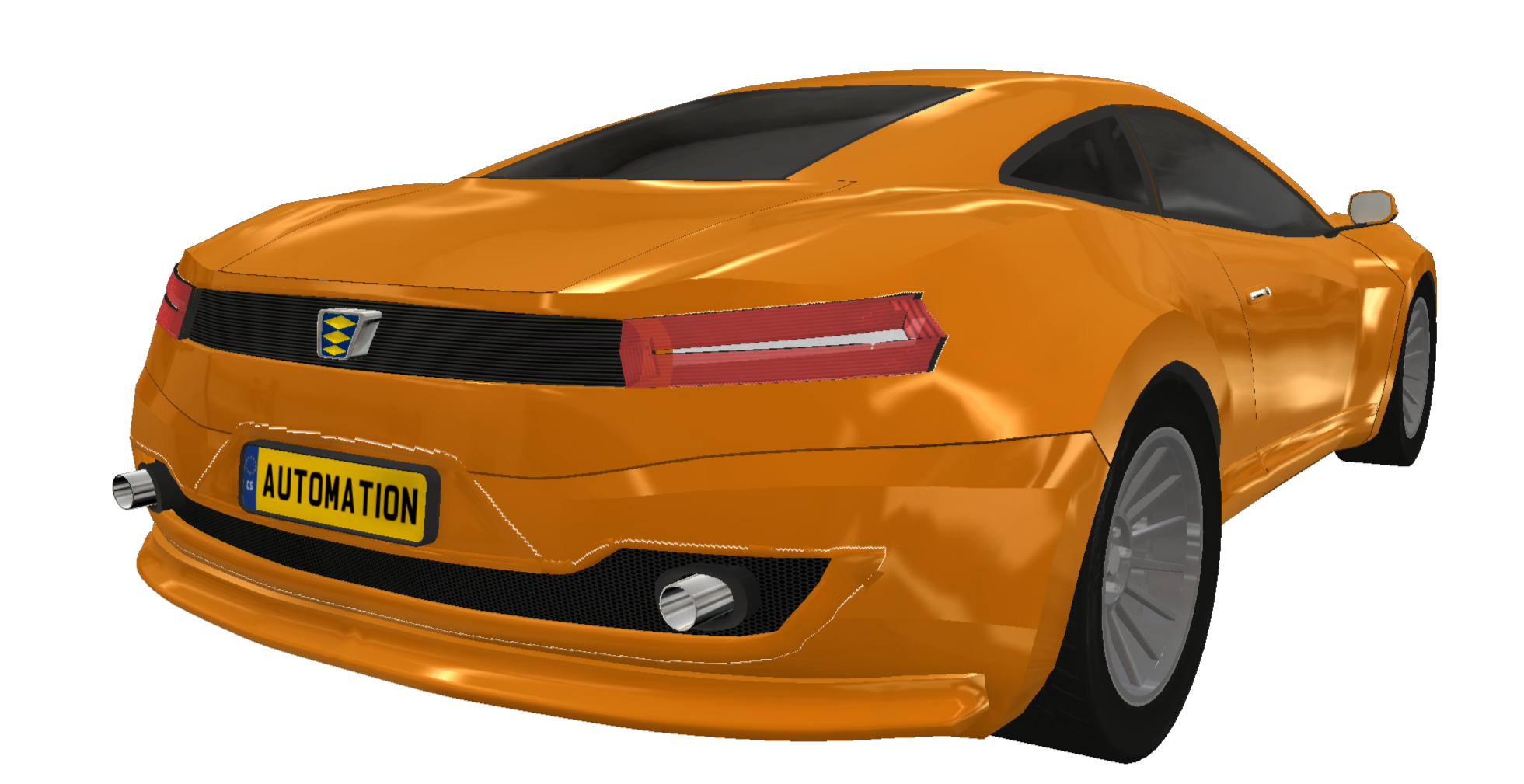 First shown in the Frankfurt IAA.

If this is the answer to the question “What if the Quasar’s engines were put into a small sports car?”, then what an answer you have given us! 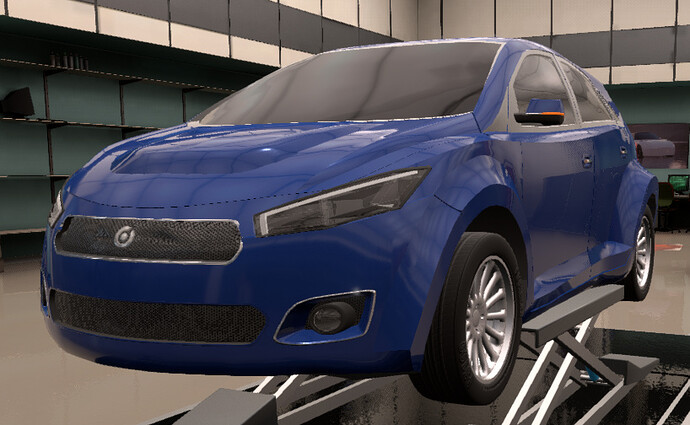 Due to issues, proper photos couldn’t be taken, this will be addressed as soon as all the car fixtures appear correctly in photomode

The first Baltazar car reborn in UE4 is the Quark.

In the transition, the car had it styling updated, follwing criticism and the engine line-up has been revisited.
However, it continues to define the Automation B-segment market, excelling in ease to drive and driver envolvement, practicality and affordability. 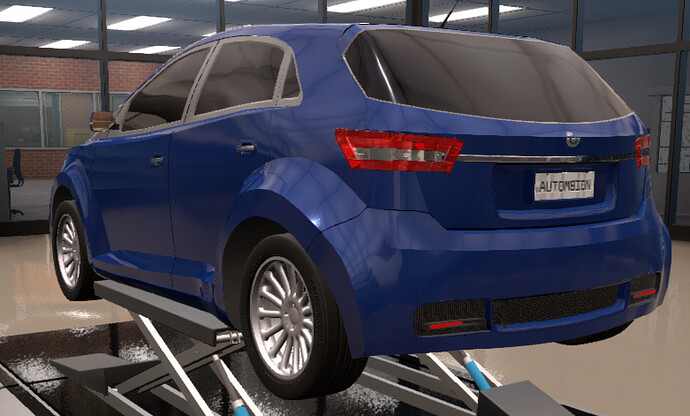 The core of the range is comprised of the small 3-cylinder engine, available in 4 states of tune, two 1.0 litre engines, with 70 and 95 hp, a 1.2 with 120 and a 1.35 with 140 hp. The base 1.0 is naturally aspirated and comes with multipoint fuel injection, whereas all other variants are turbocharged with direct injection. All cars come equipped with a 6 speed manual gearbox as standard and a 6 speed DCT is available as an option with all turbocharged engines.

Above those cars, there will be the Quark GT, in the near future.

Engine range may very between markets.

Nice remaster there. I’m expecting the Quasar and Zeppelin to receive the same treatment.