We’re planning on building system to export a data sheet to make sharing your car designs easier. This image will be a combination of automated images of your car + some related stats.

We will probably start with 2 1080p designs. Both designs will require at least a front 3/4 image and some amount of front/side/rear photos. One design will be for real-world stats, in more of an advert format which is intended for showing off your vehicle. The alternative design will be an internal memo format, which will contain all of the arbitrary unit stats like offroad and drivability and will be primarily intended to compare with other designs.

If you have any ideas on layouts and information that you would like included, please post them here.

The data to be displayed has not yet been established, so just include whatever you feel is useful for your use case if you’re making a layout!

A very rough example design (thanks to whoever I ripped the stats from) and titleguy for the base design: 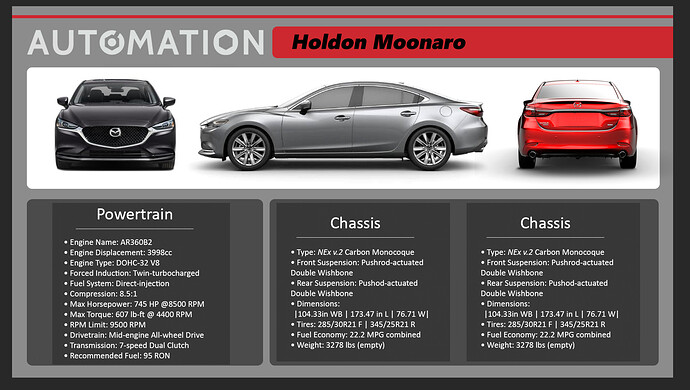 Another example by LumiaPowered on Discord. 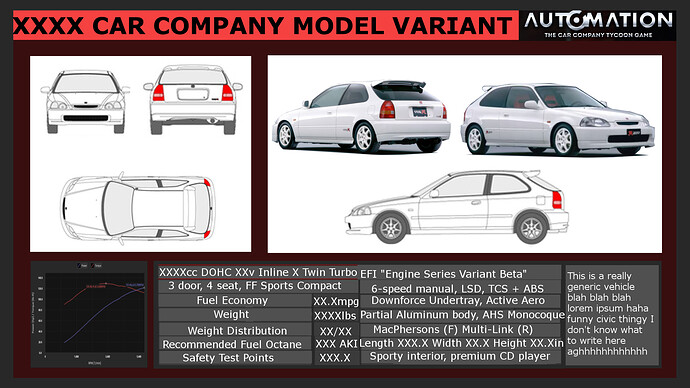 And another by Magikarpdrowned on discord. 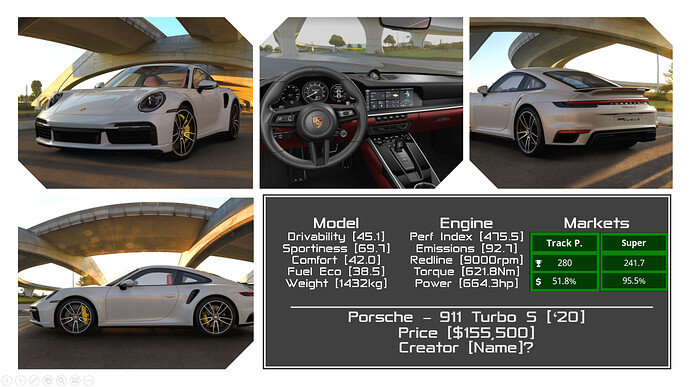 Some things that should probably add but not really room - Drive type, gearbox type, engine type and size and turbo or N/A, chassis material, suspension setup/ Things from the main page of Model and engine family. Also seats

Creator name, maybe like the exporter has the steam name of the person before it, could use the same namegrab thingy.

Formatting can be cleaned up a fair bit from the photo side, but then again thats just powerpoint placement xD
the border around the photos was just to make it interesting and not pasted on there, I’m sure you can think of something appropriate to replace it with. 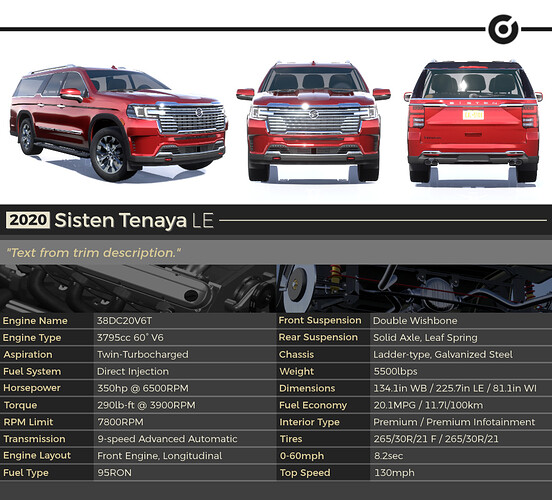 Dunno if its intended to, but having some presets that come with the game to match these designs would be nice 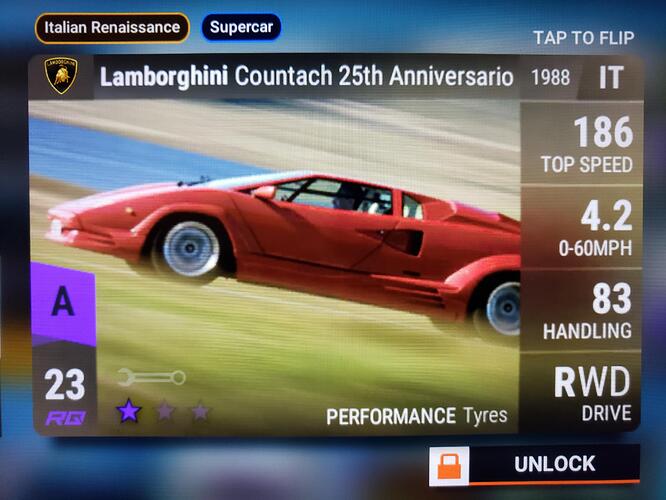 The first layout is my favorite, but I`d swap the 3 pics for a front and rear 3/4. Shows the same and looks way better.

Yeah we had discussed cards on Discord. Probably out of scope for this system for now but maybe one day.

Well, I finally finished mine so here are my suggestions!

Special thanks to @chiefzach2018 for providing the images of his car for this and its specs!

A bit rough around the edges here and there, mostly car angles, maybe the 3/4th could be more on the level with the car (3/4th because automation car sides will look not as refined compared to real cars, but 3/4th is closer to people’s perspective and can make an automation car look more pleasing while showing both the side and the front).

Out of all the variants I did this is probably my personal favourite, has probably the most space for information whilst the car remaining dominant on the layout. 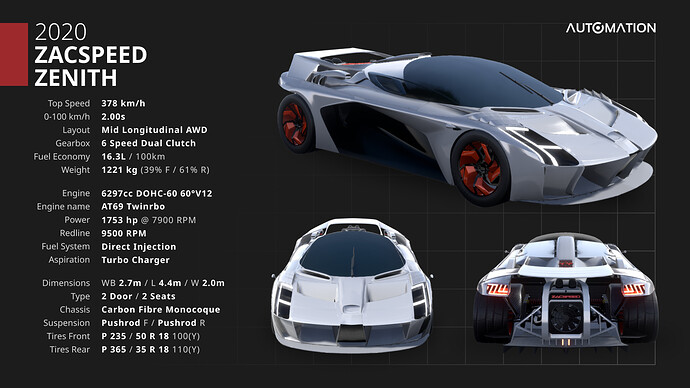 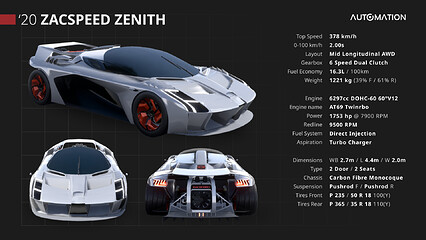 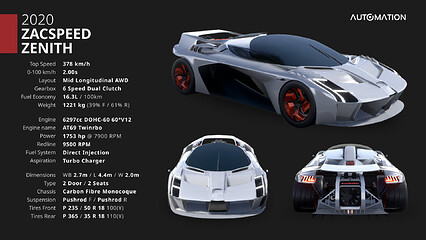 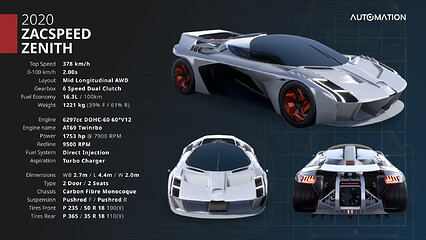 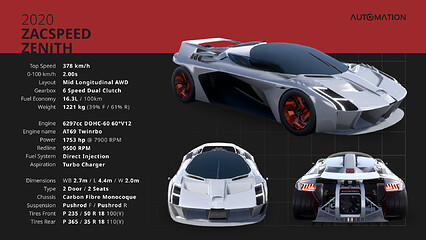 I’ve gone rather minimalistic on information, keeping it to usual technical specs and performance stats to give the general idea about the car with info that people will probably want to know the most when seeing a car for the first time.

Here’s also some other variants I made in the process of toying around with ideas, but I feel they’re either not as adaptive or a bit too specific, but maybe some ideas would come in helpful.

Edit: fuck, of course I forgot the torque

Nice work! Thanks for spending the time to make multiple concepts too.

Do you think about making it possible to customize the stats and data in the Image Exporter? I would like to suggest to have the data slots filled by using a template where you say what data (power, weight, drivability) goes into the data slots 1, 2, 3, … This system would make it very good to use the exporter for custom comparisons of cars, for example in forum challenges.

The selection of data could totally be done without a UI, for example in a .lua file somewhere in the game folders, where you list the data and the labels one after another. With multiple .luas you can then generate presets to select from inside the game before the export.

As possible data to choose from, I would vote for making all the data visible the in-game F9 Lua table Inspector available. For example if you need the height of the center of gravity, you would type “CarInfo.TrimInfo.Results.cg.h_cg”. This only works when the exporter works with the whole car and data loaded of course, not if you just pull from the limited amount of data available in the car save database (Sandbox_openbeta.db).

What do you mean?

Customization is out of scope for now, but will definitely be UE4 side instead of lua if we ever implement it. It’s not as easy as just picking data as you also potentially need rounding info, pre and post units, unit conversion, smart length culling etc.

I think we will just provide the export image layout in a few image formats to be edited manually if you want custom data/images, at least to begin with.

i’m no graphic designer, but here’s a little idea of mine made with whatever resources i had laying about
the new Modern Studio update really reminded me of the “Hot Cars” section in Gran Turismo 6’s Beyond the Apex magazine, and so i took some aspects of it and plopped it into here 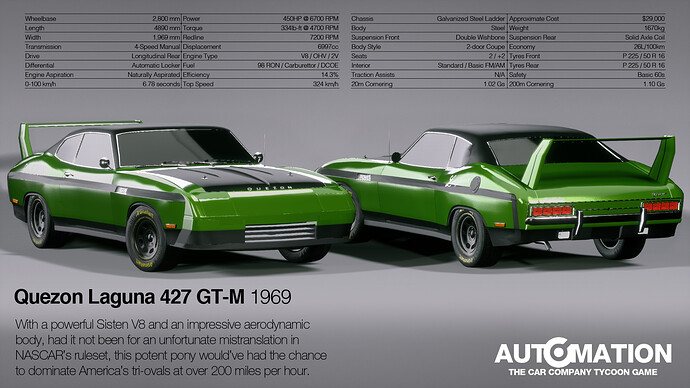 It’s about time - there have been enough game updates since the last image idea has been shown to force an extensive (if not total) overhaul of most of the cars shown here, stat-wise.