I’m trying to design an engine with 150-200hp that gets decent reliability & fuel economy. I would like it to be I4 with Turbo.

Any tips on the best parts & settings?

Well… have you tried building it yourself? Did you get any problems with your design? Where are you at with it? What would you like to improve?

lower cr, up the boost.

Noob question but what is CR?

Compression Ratio. You’ll be making your combustion chamber a bit bigger, allowing for more pressure to be safely created during combustion, which will come from more air being pumped into the engine by the bigger turbo

hmm… i might look into making something for this, what year you building in?

Please note that at the moment turbo tech ingame doesn’t exceed 80’s level as far as I’ve heard, with no anti-lag systems implemented. Turbos are planned to get a big overhaul later. Anyways, this means that the spool up is slower than actual modern turbo engines, thus combining both economy and power with a turbo ingame is quite hard, since economy pretty much requires the turbo to spool up at about 2k rpm. A high AR ratio (roughly 0.8-1) with a small turbine helps with this.

Here’s a quick attempt of me to compromise, I’m not a pro in this like for example Oppositelock is though. 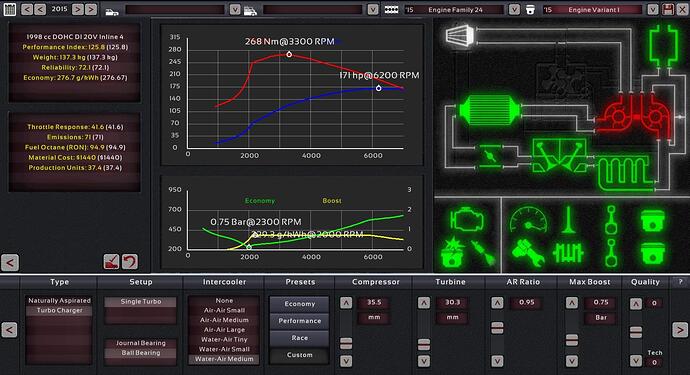 I built a 2.0 L I4 with 300 h.p. no turbo and gets great gas mileage. Leaning out your A/F ratio and upping C/R improves economy.