Armada Motors will definitely be seeing you at the Hillclimb 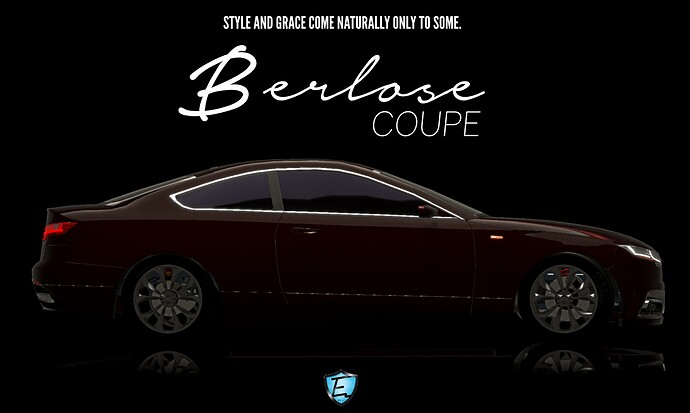 A new standard for entry-level luxury; the Berlose Coupe offers an illustrious, graceful ownership experience found nowhere else, with an absolute dedication to combining supreme comfort for stunning driving feel.

Built on the platform of one of our most well-engineered cars ever, the Berlose Coupe is unparralleled in refinement and composure, truly offering outstanding luxury in a sleek, stylish machine. 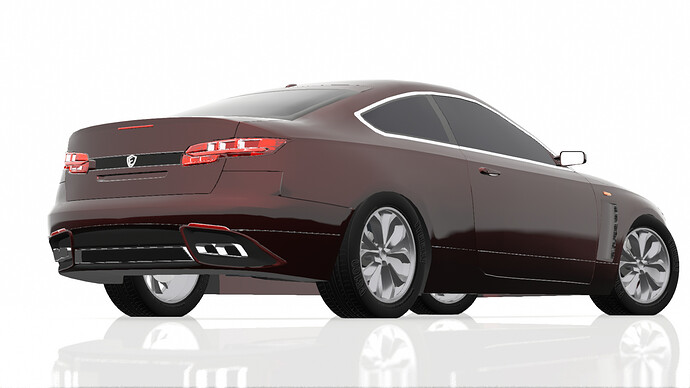 Powered by performance-tuned engines, with a specially designed 8 speed automatic transmission as well as Erin’s 7 Speed Sequential on offer, the Berlose Coupe delivers broad, unfinnicky power and is setup to waft around twisting switchback mountain roads with ease.

With a specially adapted 4 seat interior, the Berlose Coupe offers stunning comfort for all occupants, with a custom design Harmann International audio system and a range of luxury optional extras to offer an uncompromising GT package at a more-affordable-than-usual price point. 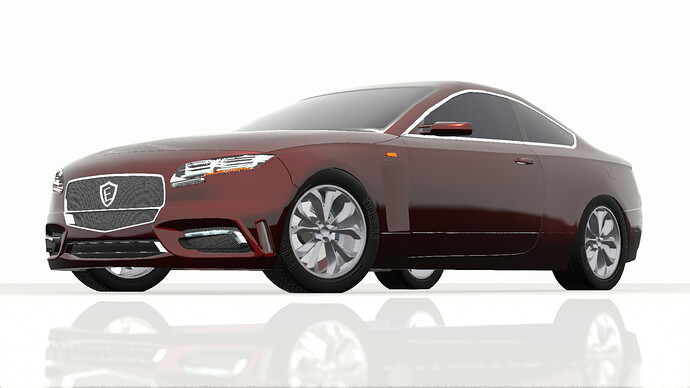 Offering two specially tuned versions of Erin’s Pureon i6 engine, the Vox Deluxe is our vision of the GT coupe - in slightly smaller-than-usual form. Choose the 2.6l option for better efficiency, or the 3.3l option for outstanding performance. 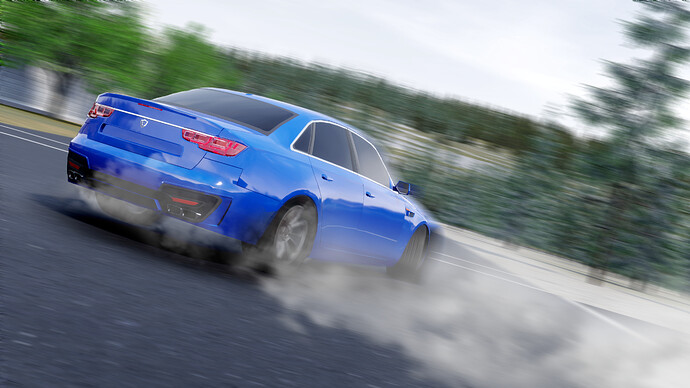 The X-Tuned, hardcore version of our full size executive saloon returns more powerful and more capable than ever; a 650 hp monster, this is the first ever turbo-charged performance version of the Berlose, wolfing down 0-60 in just 4.0 seconds. 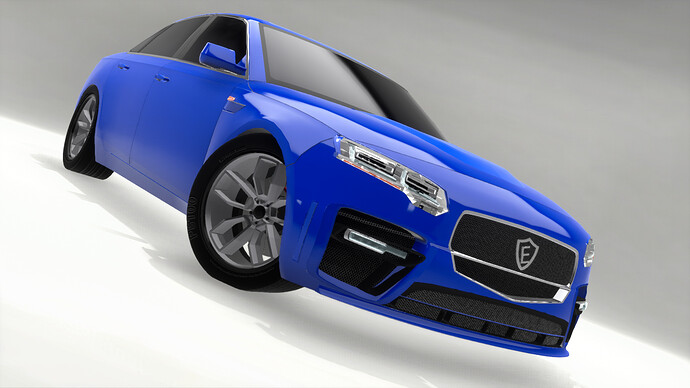 On the outside, the 400X-Turbo offers aggresive, bold styling. On the inside, it has been cleverly engineered, with weight reductions on the interior, more aluminium body panels than the standard car and re-designed suspension.

Using a 7 Speed DCT transmission derived from our race cars and powered by the same base engine as the one found in the Scarlet GTE, the 400X-Turbo benefits from our strong motorsport legacy, but also carves its own path with its uniquely brutish road feel. A car that ditches trying to be delicate for big, uncomprising power, it’s a challenge that beckons any willing driver to try and conquer. 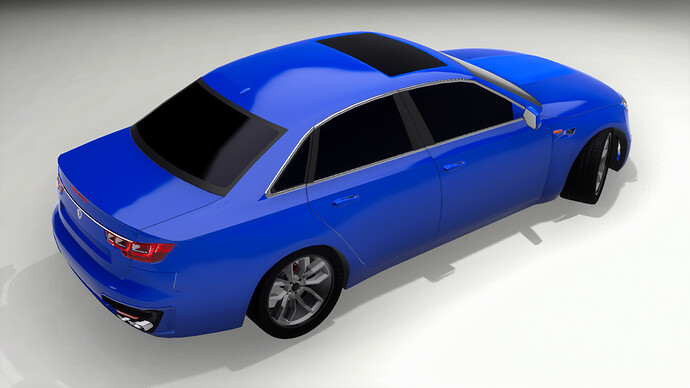 Both models are availible to pre-order and will begin delivery from January 2019 onwards.

As hype builds around the successor to the current LMP1 regulations in the World Endurance Championship, the Erin Motor Company and ErinSport are pleased to announce that a project to develop a car to compete in the new Hypercar category is currently underway. A number of rumours surrounding the future of ErinSport’s current prototype racer - the GT18 - after the end of the current WEC Superseason preceded this announcement.

In keeping with the now approved regulations for the series, the project will lead to the creation of a hybrid-powered race car, including the mandated road-going production variants which will likely be built at Erin’s X Department Specialist Production Line in Nottingham, UK. As of current, the project is experimenting with basing the car on the current GT18 chassis and powertrain in order to speed up the development process.

As this is Erin’s first ever hypercar, it has been suggested that the company may seek out external help from more experienced manufacturers in this field. ErinSport aims to have the car on the startline at the first race of the 2020 season, and looks forward to meeting other manufacturers there very soon.

Does that PureonPOWER V8 have any further expansion potential?

Good question. The Erin V8 has been a part of its brand for a long time and will remain so, but the power outputs required and regulations on material costs mean that Erin will most likely use a different engine for the car. The PureonPOWER V8 will continue to be used in the Scarlet GTE of course

That we find Interesting. 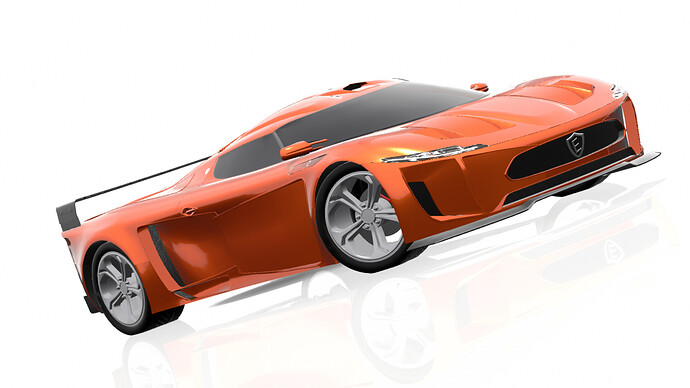 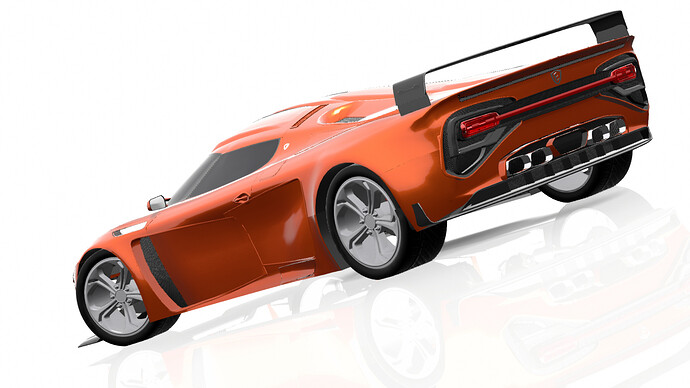 Erin have unveiled the first renderings of the design for their upcoming hypercar, which is set to release next year. Although no final name has been decided, the car is currently being developed under the title of Project 102. The body has been made far more ‘roadworthy’ compared to the race car it is based off of, the ErinSport GT18, but the company stated that underneath it is almost entirely the same, save for some minor structural changes.

The biggest change made underneath is to the engine, where a brand new twin-turbo 4.4l V10 will be used. The V10 was in development prior to Project 102’s starting, set to be used in models from 2021 onwards, but it has been brough forward for the new hypercar. It harks back to the 6.0l V10 used on the Le Mans-winning ErinSport CPR-4 from the late 1980s.

The rest of Project 102’s powertrain will remain the same as that on the GT18. The combustion engine will drive the rear wheels directly whilst the front wheels will be powered by an electric motor used during acceleration and for energy recovery. Whilst racing versions of the car will comply with regulations and only use Energy Recovery to charge the batteries, road-going versions will be able to drive the motor directly to allow for ultra-efficient driving at lower speeds.

No performance data has yet been released, however the car will begin full testing very soon. 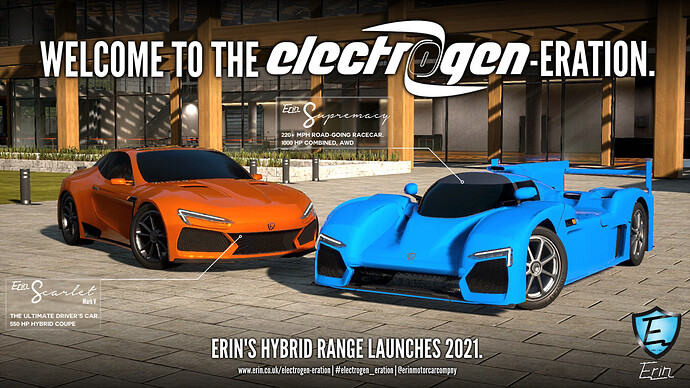 Erin is proud to announce two new cars and a new sustainably-powered future.

A new decade means a new direction for one of Britain’s most iconic car makers. Following years of research, our Electrogen hybrid system and EV drivetrain development are now ready for use.

As we update our range over the next few years, sustainable powertrains will lead the way, meaning that all new Erin’s sold from 2025 onwards will be hybrids or EVs.

That starts with Electrogen. Electrogen is a powertrain capable of full hybrid drive, allowing cars to drive entirely through electric motor power alone, with self-charging capability from the engine and plug-in recharge available too. It allows for incredible performance in tandem with our sports engines, as well as the promise of unbelievable efficiency for everyday cars.

Erin’s history is cemented in motorsport and performance vehicles. It wouldn’t be right to spearhead this next step in our company’s story without our sports models leading the way. That’s why we’re proud to introduce two new cars to our range.

The first, the Mark V Erin Scarlet. Our most famous sports car marque returns in hybrid form, and is more powerful than ever before.

The second, our first ever hypercar, the Erin Supremacy, developed from our Le Mans-winning GT18 endurance racer; it’s the fastest car we have ever made.

Stay tuned as more details will be revealed soon.

Deus! You’re back! Good to see you again

You, and your very characteristic brand.

Yeah, nice to see you again!

Hey, Deus! Nice to see you back! 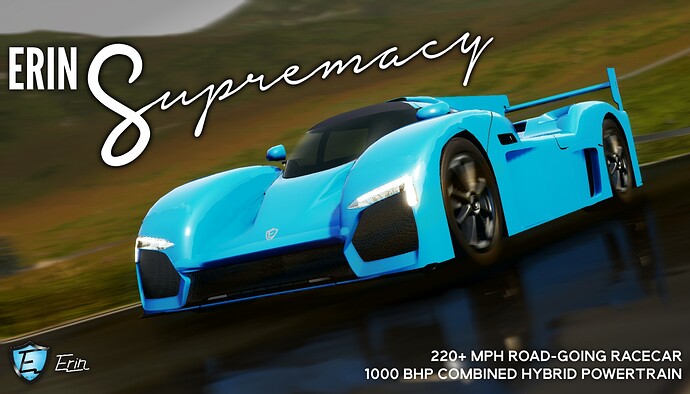 Erin are proud to reveal the 2021 Supremacy, our company’s first ever hypercar and hybrid-powered performance vehicle. It is the culmination of years of combined development from our X Department in-house performance and RnD department working alongside teams from our motorsport division ErinSport. Following in the tradition of our extensive motorsport heritage, Erin are introducing this new era in the company’s history with a vehicle that combines our sportcar racing passion with our road car prowess.

The Supremacy is evolved from the Erinsport GT18, sharing over 60% of its parts with the previous car, with the changes made were to bring the car in line with the new WEC Hypercar guidelines. This includes updating the suspension for road usage, widening the cockpit to allow for two seats, and making the aerodynamic sections of the bodywork more suitable to everyday use.

As far as road-going racecars are concerned, the Supremacy blends the line between track and road like never before, truly offering the experience of driving a detuned, Le Mans-winning protoype racer to the public. With 0-60 capable in less than 2.0 seconds in X-Drive mode, and a top speed in excess of 220 mph, this is the fastest car ever produced by the Erin Motor Company.

Not only will the Supremacy lead the company into a new age of hybrid powertains, but it will also lead our campaign in the new era of the World Endurance Championship, a series from which so much of our history is associated with. 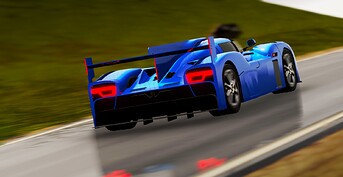 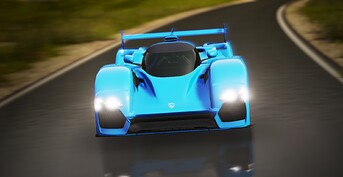 The result of 6 years worth of development, Electrogen is Erin’s in-house hybrid system. It aims to push the internal combustion engine to its absolute limit, and paves the way to transition to an all-electric future in the 2030s. 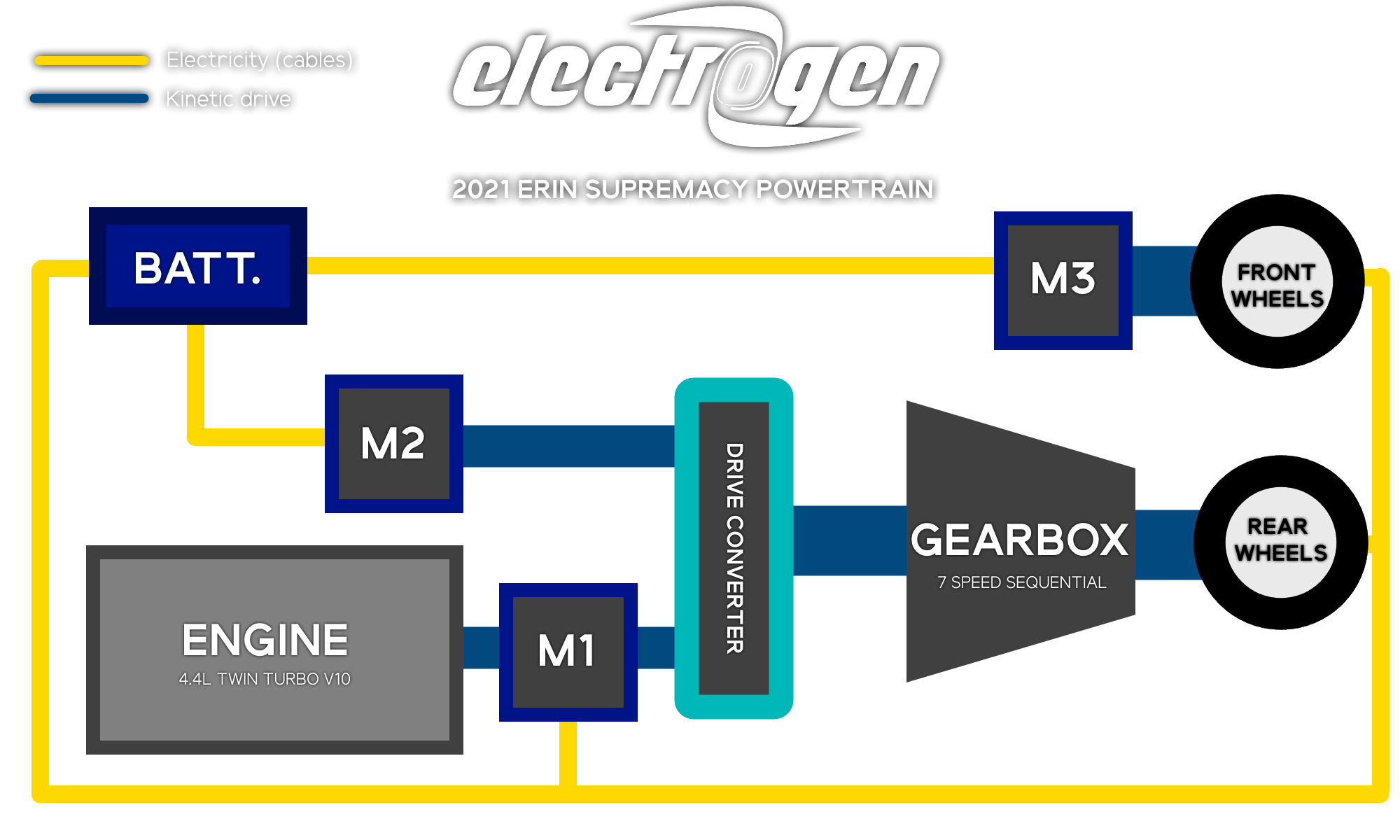 Cables from wheels are representative to show direction of electricity generated from kinetic energy recovery.

Electrogen offers a number of driving modes to excel both in road usage and as a performance machine: 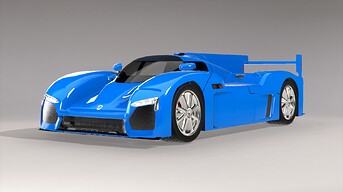 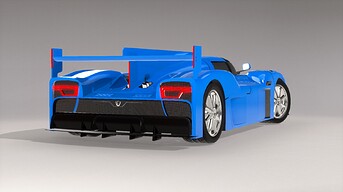 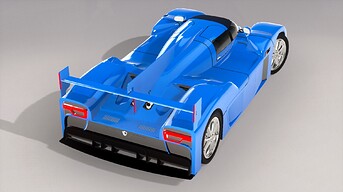 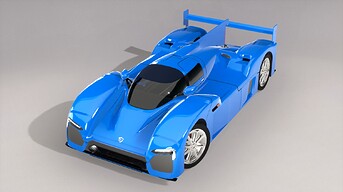 Erin expect to produce roughly 100-120 examples per year, currently available in one spec, with an asking price of £870,000.

The Supremacy will join the 2021 Erin Scarlet Mk V to form Erin’s halo model duo, proudly combining hybrid technology with motorsport pedigree and performance car perfection. It’s thanks to the development of these models that Electrogen will be rolled out to every new Erin model by 2025, with pure EV options alongside these.

Of course, there is also another purpose for the Supremacy… 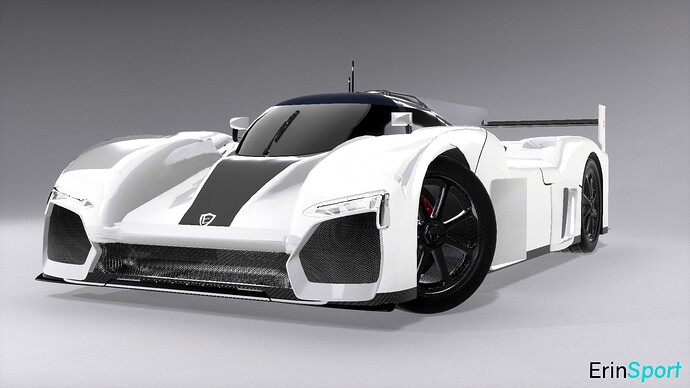 Set to compete in the first season of the WEC Hypercar era, the Supremacy S1 will the ErinSport campaign for victory in the 2021 World Endurance Championship. Having been under wraps for months as our teams balance working safely in the pandemic with getting the car ready in time for the start of the season in March, it has been a herculean effort behind the scenes to complete development and testing, which we are proud to announce has been done on time.

The ErinSport Supremacy complies with the WEC Hypercar rules’s stipulation for a single Motor Generator Unit, which will power the front wheels with an equivalent 268 HP and provide kinetic energy recovery to charge the battery. The 4.4L Twin-Turbo V10 meanwhile will drive the rear wheels, with a slightly higher output of 670 HP.

Along with the above powertrain changes, minor bodywork changes, namely the addition of racing parts, are the only difference between this and the road-going version. 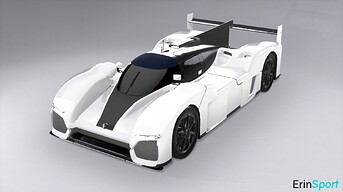 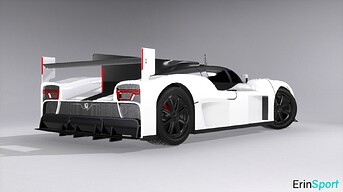 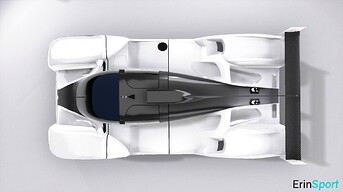 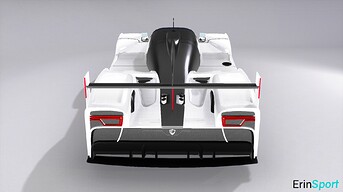 Erin and ErinSport would like to wish all other teams competing in the 2021 season the best of luck in what promises to be one of the most exciting eras in endurance and sportscar racing history. The Supremacy continues Erin’s legacy of success in this sport, and guides the company’s future in an ever-intrepid and changing world.

This is simply an amazing machine, even as a road car - and one that I expect to enjoy a period of supremacy in competition, hence the name. Welcome back.