Experiment: Does R&D Quality Cost Extra? How does it compare to the quality slider?

Someone in the succession campaign thread postulated that some engine R&D was causing our engines to be more expensive to produce. I figured it wasn’t but it occurred to me I don’t actually know, for sure. Therefore, I set up an experiment to compare the cost of engines with and without R&D quality bonus.

These findings should apply to basically all R&D quality but not to situations where a new tech option is unlocked early.

I’ve made two campaign companies in 1946 which are identical, except one has +0 base tech everywhere and one has +5 base tech in two categories, Bottom End and Top End. For reference, these engines are pushrod V8s with dual eco carbs, 6.0 compression, short cast exhaust with two mufflers, and basically everything else at default. Here is our baseline engine:

For reference, it redlines at 4200RPM, the highest it can get before it experiences valve float. Numbers to keep an eye on in particular are 26.2 PU, 78.5 ET, and 36.8 Reliability.

Here is the engine with +5 R&D quality.

It’s not costing us any more! In fact, we save 0.3 ET. We gained 0.1 reliability (negligible) but obviously a good bit of performance and we could rev it higher if we wanted to. So, when choosing the same tech options, R&D quality does not cost extra and might even save a little money.

Here is the engine with 0 R&D, but +5 on the Top End and Bottom End quality sliders:

First off, the cost is absurd, 44.5 PU is almost double (mostly that’s the Bottom End, I think) and 106.4ET is a lot too. However, the effect of the slider is stronger than that of R&D. We’re making more power than 5+0 engine and the power curve is still going up at 4200RPM.

Now the opposite example: what if we put -5 sliders on the engine that has +5 from R&D? Is it the same as 0 quality?

Once again we see that the effects of the slider are much stronger. This engine is significantly worse than the baseline. Also, we save about 2PU and 4 ET from the baseline.

For reference, I reduced the redline until we stopped getting any valve float on this engine. We ended up with 37.1 reliability. That’s higher than the 0-quality engine at 4200RPM, which suggests the reliability losses (at least for these specific sliders) aren’t that bad.

One last engine: this one has +5 quality, and I reduced the quality of the top end by as much as I could without getting any valve float at 4200RPM. Remember, the 0-quality engine experienced valve float at 4300RPM so I set its max to 4200. 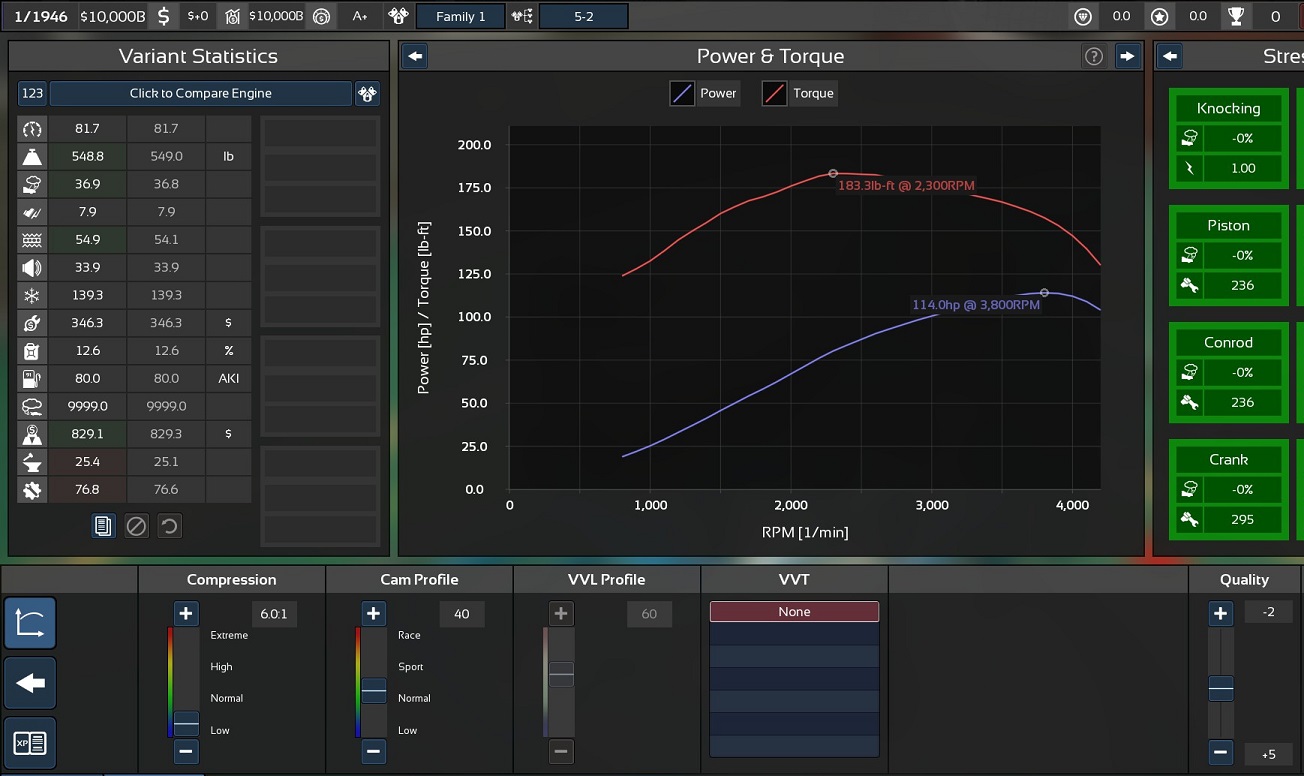 I ended up going to -2 quality, and for reference I did bottom end to -2 as well. Of course, we’re slightly cheaper than baseline. However at even 5-2, we’re making almost exactly the same power as 0-quality, with about the same reliability. Since 5-2 is slightly better than 0, I also wonder: Is it it similar to +1?

So there’s another interesting finding here as well. In campaigns I’ve often said things like “We have +4 R&D and +3 quality slider, so it’s basically +7”. However, this isn’t true at all. Not only is the effect of R&D much less than slider quality, every combination of R&D and quality numbers produces a unique result. There doesn’t seem to be an easy way to linearly compare them at all.

Thanks for clarifying this out. That someone was me, and I don’t remember right now from where I had carried this misconception. I remember reading it somewhere, but maybe I misunderstood it. Anyway, thanks a lot for sharing.

All in all, I would still stand by my general thought, that reducing the sliders is still a viable way to decrease number of required production units. But after what you wrote I realise now that there is even more incentive in investing in the research, so that you can lower the quality, so that you can produce even more engines/cars from the same factory sizes.

+1 for the suggestion, to make all of that somehow more visible. Maybe show:

R&D tech pool does increase the effective design year of the parts.
The quality slider does that too, but also adds flat bonuses to certain stats.

That is why the quality slider is more powerful than tech pool by itself, but also that means the two effects can’t be rolled into one single number - and yes, I agree that the way it is displayed in the UI makes it seem as if they are the same thing to some degree. Something for me to consider for 4.2!