In no particular order…

I may be biased, but I have to support mat1476. Mikonp7 does good work as well. I am convinced yangx2 is a team since they seem to have mastered both the fixtures, and tuning to the point of casually winning CSRs back to back.

Gotta give the shoutouts (in no order)

It’s all very close and tbh i just vibe with the designs because it’s what i like to design too. there are many many great designers out there, each has their own area in which they are amazing, but these are the guys that constantly raise the bar in terms of a clean design with all the details

Not 3, because I’d have to rank them to limit the list, and that would be very hard. Random order too, and I might have forgotten some that haven’t posted recently:

All for realism (the main reason for me to not like a design - it’s not believable), attention to detail, clean design where it’s needed, internal design consistency and some special taste.

Oh, yes, Aaron! I’m not sure if I’d put him in my top list, but I sure like his designs.

BTW, I think yours are somewhat underappreciated.

TBH, I am not sure that I like threads like this (which is not the same as “take this down” or “you are stupid”, it is more like “we don’t all think alike but I respect your way of thinking”). To start with, I am not sure that we should use this forum to praise certain individuals, we have the EOTY awards and I think they are enough. If you like a design, tell that to the designer and even try to tell him why, instead of just hitting the like button, if you have the time and energy. If you like all his work, tell him that personally. Most people will prefer that over having tons of likes or being high on some ranking list.

Also, it is hard to say who is a good designer. Or rather, what criterions that makes the best one?

The one that makes beautiful cars, or the one that best captures the soul of what he is making? You can design cars that are gorgeous, but if the company that you are running is a korean 90s company making cheap sh*tboxes that is far from realistic TBH. Or is it attention to detail? What’s best, an ugly and unrealistic design, with the perfect detailwork, or a nice looking car that captures the spirit of what it is supposed to be completely, but that has crooked lettering, broken fixtures etc. Or is it creativity? Managing to make the worlds coolest door handle by modifying a taillight fixture, designing a coffee brewer out of automation fixtures…?

Also, what is the most impressive, being a outstanding designer that has played since the Kee era but with no improvements whatsoever the last three years, or having played this game for two weeks and gone from cars looking like toddlers drawings to something that you actually could see on the road? Being able to put hours and hours of work into designing the perfect car, or being able to make a car 90% as good with standard fixtures in 5 minutes? I don’t have the answers for this, actually.

But three honorable mentions IMO, no ranking and not necessarily my top 3.

@Mad_Cat - Manages to capture the spirit and look of the budget crapmobiles he is doing so very well.

@Marcus_gt500 - Incredible attention to detail that seems to have no ending whatsoever, also kudos to the complete lack of elitism despite being a good designer

But of course there is many more skilled designers here, so if you’re not mentioned, don’t be sad for that…

I dunno about y’all, but that @Grandea guy is pretty cool.

There are no other nominations

My nominations have to be: 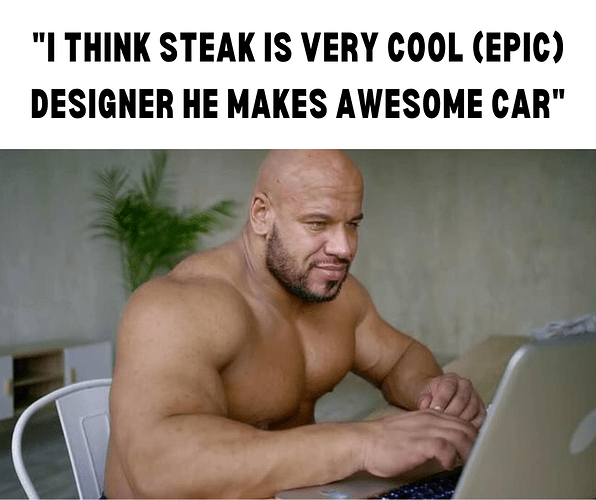 So, there’s at least one good thing this thread achieved - bringing back some guys I haven’t seen in a long time

Honestly, while I can agree with @Knugcab’s arguments, I perceive it as taking this too serious. And I treated my list as not some podium, but rather a bunch of examples for what I described below as traits of a - IMO - good design, which to me is more important than compiling a ranking (I don’t like rankings too much, they often seem pointless).

The issue of having a thread like this is that it just generates unnecessary ego channeling, and while it can make some people feel good, it could also do a fair bit of making others feel bad, considering that anyone can see this.

There really isn’t a need for this especially when something like the EOTY awards exist… That being said, hopefully whatever gets posted here doesn’t get taken too hard into heart for others and perceive it as an oddball popularity contest. People have their own perceptions as to what makes a good design, what makes someone the best designer, so on and so forth.

The issue of having a thread like this is that it just generates unnecessary ego channeling, and while it can make some people feel good, it could also do a fair bit of making others feel bad, considering that anyone can see this.

Every time I see things like that I wonder if I’m just too chill about my self-esteem, or is it taking things too seriously. As for personal design perceptions, sure, but if enough people mention the same thing, then there might be sth universal about it. Eh, whatever, I’m not here to change any opinions

Honestly, I just make cars and be satisfied with what I make in the end; the end reception is just sprinkles on the cupcake XD