[Final results!] The Car Shopping Round 66: A car for a hero

The Car Shopping Round 66

A car for a hero

Unfortunately, they’ve hit a bit of a snag. Issues with staffing and logistics have set back the schedule by several weeks, and with less than two weeks before the filming is supposed to start Dick has found out that the company that’s supposed to supply Spencer’s car has gone into liquidation. This is a problem because both Dick and Daniel, who also does his own stunts, are quite picky about what car they want. Because of this, the production team is currently in a crisis meeting, trying to solve the situation.

Dick is the first to speak.

“Alright boys, I think most of you understand why we’re here, but for those that don’t, I’ll give you a brief. Long story short, the car we chose for Spencer, that isn’t happening. The company just went bust, and we’re not gonna get any cars from them.”

He clears his throat, and continues: “Since we’re already short on time, we’re gonna need a replacement ASAP. This is priority number one, and I need everybody here to pitch in. I need something that looks cool, something with style - and make sure it’s decently fast; slow cars don’t look good on film.”

Daniel, who is sitting at the opposite corner in the room, interrupts: “And no clunkers either, yeah? I don’t want some bloody death trap that wants to send me through a brick wall arse-end first or self-destructs as soon as you give her some gas, innit?”

“Yeah, that too. Look wherever you can: newspaper ads, car mags, posters in the tube, pictures of cars you found outside your flat - I don’t care, as long as they’re on my desk by Friday morning. Everybody got that?”

He’s met by a series of nods and “yeah”s. He smiles.

“Alright, that’s great. Meeting’s over, everybody, get to work!”

And that’s were you, dear competitor, comes in. You’re going to build a car that’ll meet both Dicks and Daniels demands. For those of you unfamiliar with what kind of show they’re making, here’s a few examples:

And who could forget this lovely piece by the Top Gear crew?

The cars will be judged on the following criteria:

By then I want the .car file in my inbox and a ad of the car posted in the thread.

I also suggest you don’t send in your car immediately, in case there are any rule changes.

Oh and here are some groovy tunes to get you in the mood:

Sounds like fun. I’ll wait until the bugs are fixed before I send something in.

Anyway, are there any limits on PU/ET? And must the car be fitted with a catalytic converter, and required to run on regular unleaded?

Teaser as I continue to refine it. 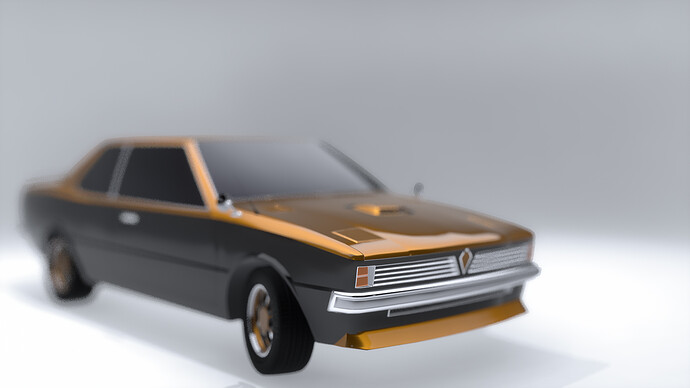 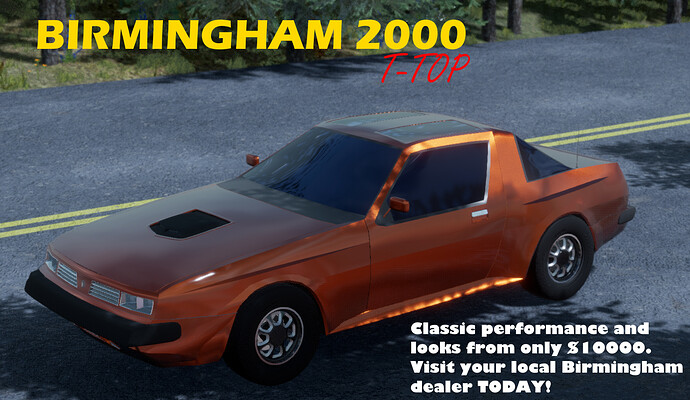 What Knugcab said; unleaded wouldn’t even be a thing in the UK until ten years later, and the difference in price between 2-star (Regular Leaded) and 4-star (Super Leaded) was neglegible.

(Since I am new to the forum, but have been lurking here for a while, I wonder if I get this right? I post an ad like this here, and then I can send you the .car-file via private messaging? But you would like us to wait for a while before sending it in? ) 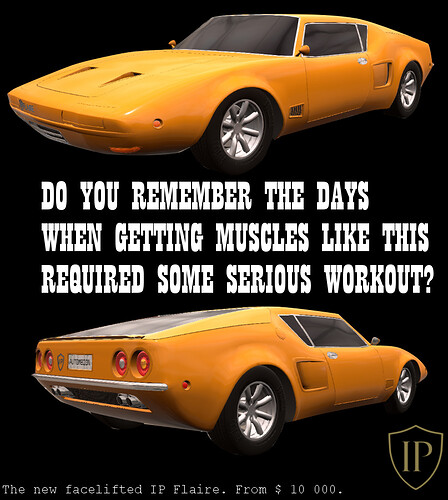 Yes, we know. You have always been wanting an exotic sports car, but you have never wanted to live with one? After all, acceleration times or cornering abilities won’t help you when your wallet is broken. As the well-mannered mamayans we are, we want to send an excuse to some of our italian, british and even german friends for harsh words like this, but get the facts straight now, high sticker prices, huge servicing costs and sometimes doubtful reliability, is flaws some buyers will accept for being the first one to leave the redlights. And we are fine with that. To be on top, you have to make sacrifices sometimes.

But if you are fine with just having things like four wheel disc brakes, fully independent suspension, a peppy 141 hp V6 that will send you to 100 km/h in way under 9 seconds (8.82 to be exact) and give you a top speed of 185 km/h (not that we suggest anyone to drive that fast on public roads), styled steel wheels that does look almost like the real thing, leather wrapped sports steering wheel, contoured bucket seats, tachometer, modern and vibrant colours, functional NACA ducts on the bonnet and much, much more, there is now a possibility to get it for a sticker price of $10 000. And you don’t have to worry about servicing costs either, a recent study by independent sources gave the IP Flaire a service cost index of 834.8, compared to the benchmark index of 1000!

Of course, if you are more interested in things like a rear hatchback, inertia reel 3-point seatbelts and quality Mamayan engineering, there is an alternative. The IP Flaire. All the qualities you have learned to know from our other cars, we also build into the Flaire. After all, a beautiful outside and a peppy heart is no excuse for leaving out a good head on the shoulders.

For 1975 we have made some tweaks on the outside of the Flaire. Not many, since there was hard to improve on the already beloved original, but the headlamps now are of the pop-up type (another feature you probably thought you had to buy an exotic supercar to get, huh?), so you can look like a star in the daytime and shine like a star in the nighttime. The new front bumper are integrated into the bodywork and molded into the same colour as the body. Yet it offers better protection against minor impacts than the old separate metal bumper, due to being made with a new polymer technology. Also, we have revised the classic IP grille, still true to its heritage but looking into the future more than ever. After all, we don’t think the little tweaks we have done will scare you away from the Flaire, right?

The new facelifted IP Flaire. When you want muscle without having to do the heavy workout.

The new facelifted HiWay. This is the GT2000. 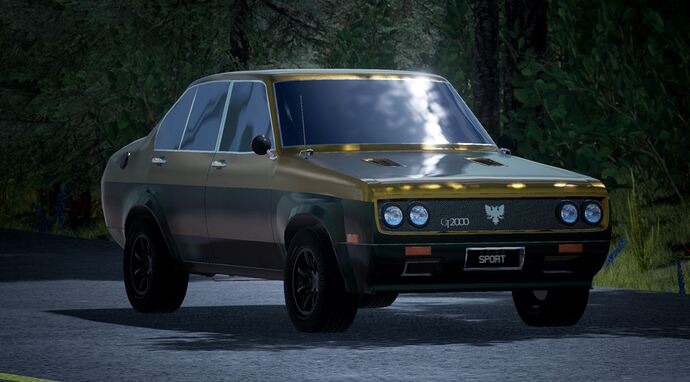 Unleaded fuel was required in all cat-equipped cars in the US starting in 1974. So in '75 it would have been both available, and on most cars, required. Only a handful of new cars in 1975 were able to meet the emissions requirements without a cat (the Honda Civic being one).

(Just noting the history on that part, and how it differs from Europe at the time.)

Yes, for US unleaded and cat would have been correct for 1975.
However, european brands sold their cars with different engines in the US. Nobody wanted to sacrifice all the performance that got lost in the US versions when high octane leaded fuel still was available at the tap and emissions standards low.

This is a very UK-centric round as shown by the TV series videos.

Unleaded was introduced into the UK in 1986.

Good to know. Looks like it’s time to spend an hour or three updating all my lore files to include “world” engines once the US/Japan start offering Unleaded.

(and, of course, to get my entry ready)

Simply by choosing cheaper parts and materials. If you can’t get under 10 000 you’re just trying to make something too fancy. My car currently costs just a bit over 9000 but has decent market scores and even some +2 quality in some areas. No negative quality anywhere.

Twin barrel i4, 4 speed manual and no DW suspension. It makes the same power as an RS2000 and the same general setup. 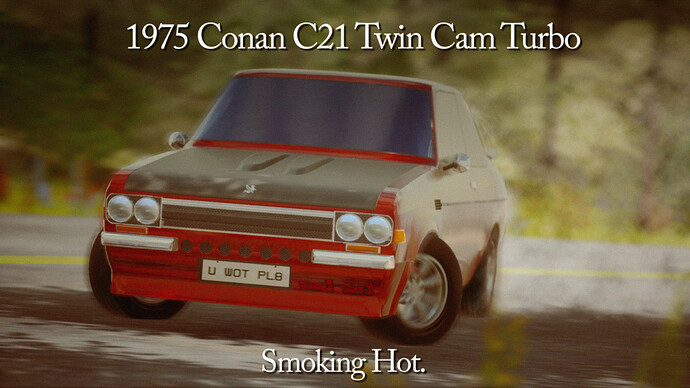 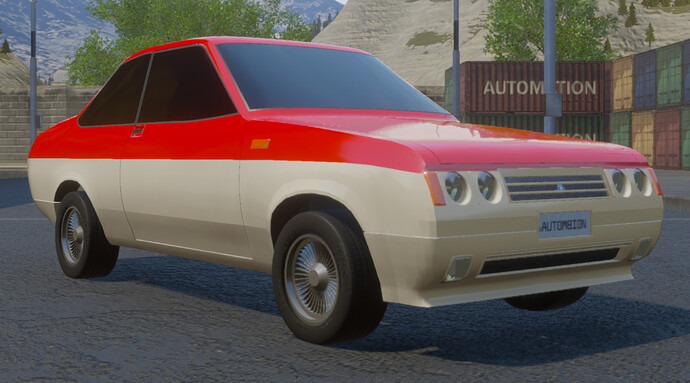 Nippy, affordable and surprisingly quick for its modest engine size, the M20 Twin Cam provides all the thrills a young sporting driver on a budget could want, for just $9,500.

When it comes to reducing the price by saving on tech, I like to think realistic. What would a car in this class have in this year? Sure, there was all the technology available to put a DOHC fuel injected V12 turbo in a family station wagon in 1980, but that did not mean that they existed. If I look at my 1985 pickup truck (IRL daily driver), it has a ladder chassis, leaf springs in the rear, pushrod cast iron engine (injected just because it is a diesel), rear drum brakes and no power steering. Really the kind of crude truck nobody is dreaming about making in Automation in 1985, but similar tech level to almost every 80s pickup in the real world…

Do you want a normal car? No, no you do not, and over at Pastijuni Motor Worx think it is time to re-think the personal budget sports car.

Why should a Mid mounted V12 be out of reach? Surely you do not need the best tech to make a great drivers car, right? That was our goal when we designed the M3-ME1800 sports car. A down to earth simple design which can be easily serviced by the owner. To keep costs down we simplified the car everywhere we could, Massive drums were used both front and back, the drums are full floating, and a single spindle nut keeps the wheels in place making removal a breeze.

With a small, low power V12, we were able to use a light weight 4-speed gear box featuring square cut gears for that authentic race car sound, and you might think with all this you would be riding in a tin can we bet? Wrong, the ME1800 is fully equipped with plush full support wool seats, they keep you in place when driving hard, warm in the winter, and cool in the summer.

On the room we feature two targa style removable windows, which can be easily stowed away in the trunk.

We aimed to make the ultimate drivers car as affordable as possible, and we think you’ll agree with us if you take one for a test drive. 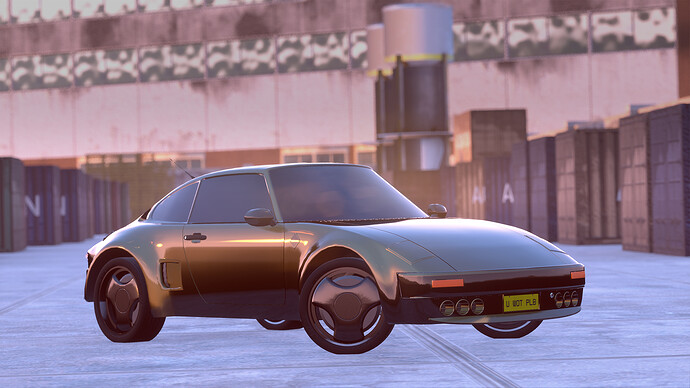 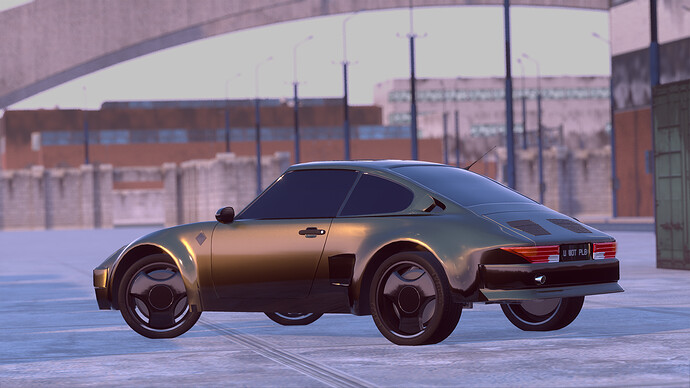 (WTF: A non LHE Lore car… The inside name for this one is Meme V12)