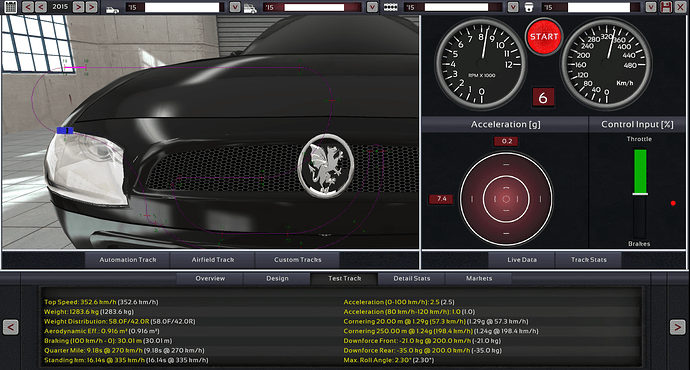 What am I supposed to see here?

The little red dot on the far right, and the G meter

Well, was that through the whole corner? Or just a sensor inaccuracy? If you think something is off, please share the car and track combination where this is happening.

It might be a corner with high camber, and maybe in the game the lateral G is actually horizontal G? (not sure)

10 degrees banking only? That’s definitely a little bit too low. What was the radius of the bend though? That can affect things, though given your car has lift at speed, I can only imagine that its high speed cornering is not as good as its low speed cornering.

I get my cars to pull upward of 6g on a regular basis with a 70 degree bank doing 360km/h. HOWEVER the sensor can go haywire if you end the track on the banked curve. The value will keep going up I suspect because the car doesn’t have any information on how to exit the curve and therefore what the final input should be. When I ended on a long 70 degree banked high speed corner, the sensor showed like 11g lol.

It does seem to be as @strop stated, the final stretch of the track being a corner… I added a small straight and it returned 1.3G. Guess it’s not really an issue, but something to note for future track builds. Thx for reading/thoughts.