This is my companies first performance based inline four. It puts out a hefty amount if Horses for the cost and time. It will be sold to tuners, and put in special dealership cars (s2000, Alitma, Accord) 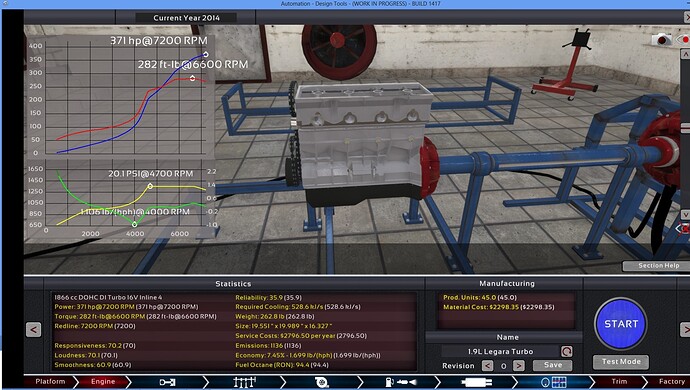 I think you can greatly improve the engine.
The economy is very, very low, even for a turbocharged engine, you’ve set the limiter too early (the power will increase after 7200rmp, right?) reducing the power bandwith usability.

The power stops at 7200 RPM. The economy is not the best but this is also a racing type motor, not for your daily commute.

If it is a racing type motor, it would be in your best interests to increase the rev limiter by quite a bit, to ensure the power remains consistent at the top end.

The power stops at 7200 RPM. The economy is not the best but this is also a racing type motor, not for your daily commute.

You don’t limit the revs just because you hit max power. You have to limit the revs in a way that the power after you change the gears doesn’t drop too much.

Think about it this way. If the engine didn’t have a rev limiter and the valve float didn’t wreck the engine your power would drecrease exponencially after the valves start floating. But would you change gears right at peak power? Or let it rev a bit higher so that you still use that power that even though is not max is more than the power you will get after you change gear?

Erm, lets try an easier way to explain it.

There are a couple factors at play here. You know that the lower gears are shorter. Well, shorter gears actually put more power to the wheels because of the way that torque works, getting multiplied in power in lower gears. Look at it this way: you know how much easier it is to spin your wheels in lower gears. You are applying more power, even though your engine isn’t producing more.

Then, think about shift points. If you shift AT max power, you were at max power for a very short time, then you drop revs lower down in the next gear, dropping off the powerband. Were you to shift AFTER max power, you not only were at or near max power for longer, but you also shifted up into a higher RPM than if you had shifted up earlier, putting you into more power quicker. This is especially evident in turbo engines such as yours, where shifting up too early can drop your engine off of the boost, giving you massive turbo lag every time you shift.

Also, there is ease of use. It takes a pro to shift at optimal RPM, first time every time. If you make your RPM limit later, you are making your optimal RPMs for shifting later and longer, easier to shift at.

There are lots of benefits. In the beta which I am testing, there is a stat called “Performance Index” which will eventually be added in game. This tells you, properly, how well your engine actually performs, and gets a higher number (to a point) when you raise the RPM limit. As a general idea, raise your rpm limit until you reach 80 to 90 percent the max power.

(I’m gonna steal this from daffy

)
Here is a pic of an example of what I am talking about with gearing. You see how even after max power, the car is accelerating faster than it would be in the next gear? Ideally, you would be shifting up right when the previous gear’s graph touched the next gear’s one. 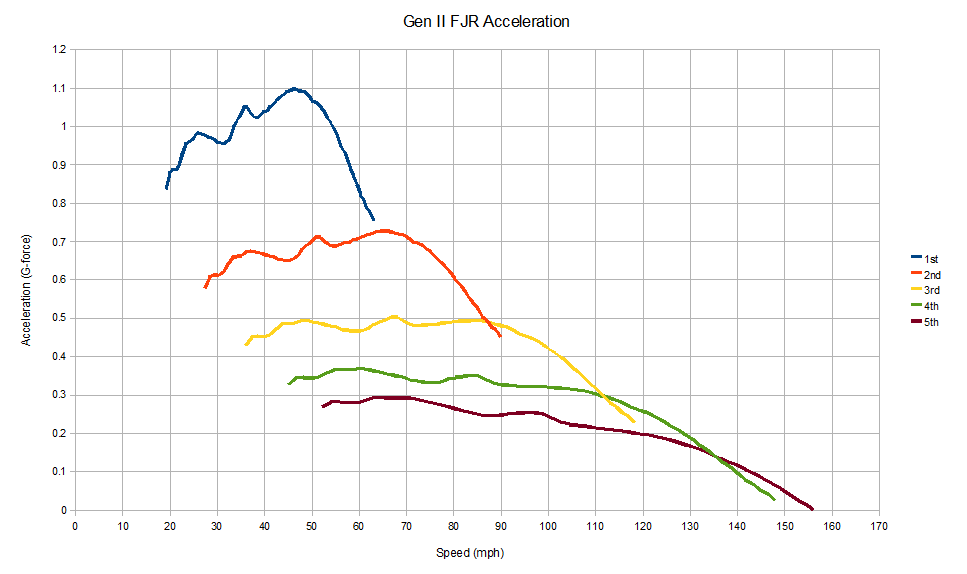