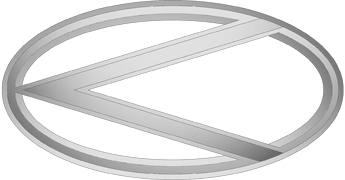 In 2015, Kazume produced 1.5 million vehicles for global sales, the majority of which (nearly 1 million) were produced in the company’s Japanese plants, with the remainder coming from a variety of other plants worldwide. In 2015, Kazume was the fifteenth biggest automaker by production worldwide.

The name Kazume derives from the Shinto deity “Ame-no-Uzume,” the kami of dawn, mirth and festivities. As of 2014, their website states that the logic behind the name relates to cars that are capable of a fun or engaging driving experience.

The company website further notes that the name can be traced to the founder, Shouko Kazuma.

Kazume was founded in Matsudo, Japan in 1955 as a motorcycle manufacturer. Their first product was a 125cc two-cycle single-cylinder motorcycle called the KZ-1. It was a competitive success, and ended up gaining the company enough money to start putting out bigger products, such as the KZ-40, which had a 398cc three cylinder, and was one of the most powerful motorcycles available at the time.

Inspired by the Subaru 1000 in 1966, Kazume designers decided to try their hand at a car. The flat-four in the 1000 gave the idea for use of a flat four due to its smoothness and low center of gravity. In 1967, their first flat-4 boxer engine was created. It was experimented with by taking two existing four-stroke two-cylinders and mated them at the crankshaft 180 degrees apart.

Kazume then partnered with the recently established Hokuto Heavy Industries, and a body was designed to fit the engine and chassis. This gave light to the 1969 Kazume Starlight, a 2-door coupe.

With the 1973 oil crisis, consumers in the lucrative US market began turning to making small cars with better fuel economy. American car manufacturers had considered small economy cars to be an entry-level product, and their small vehicles employed a low level of quality to keep the price low. Conservative Kazume held on to rear-wheel-drive designs for longer than most, but came out with their popular front-wheel-drive models in the 1980s.

In the 1990s, Kazume began to branch out from producing mostly compact cars by adding many larger and more luxurious vehicles to its lineup in the US, including a full-sized pickup, the K100 (and later the Katsura), several lines of SUVs, a coupe version of the, and the luxury oriented fullsize 828. They would also launch newer iterations of their sports cars, namely the KZR and Nai during this era.

In the late 2000s, Kazume’s brand image started to go downhill. Following the 2007-2008 Global Financial Crisis, their stocks dropped dramatically and quality fell downhill, in an attempt to save money. Kazume resorted to using hard plastics on the interior, and cheaper treated steel body panels instead of the partial-aluminium cars they once made.
After the dust had settled, Kazume had persevered just fine. Their cars were back to the quality they once were, but the consumer market still had a bad taste in their mouth.

2014 Kazume Rebranding
With sales much lower than what they should have been, Kazume needed a way to gain consumer interest back into their cars. Starting in 2014, the Sales Department suggested a rebranding of some model names. The elaborate and interesting naming schemes for more than half of their vehicles was dropped in favor of a more German-style alphanumeric designation, that was still easy to understand. Some models, such as the Katsura and Solis, kept their names for familiarity’s sake. This was called the K2X rebranding. See ‘nomenclature’ under the Current Models section for more details.

Hokuto and Kazume are still partnered, with Hokuto investing in Kazume with an 11.2% share in 1968, which was increased to a 23% share in 1980. Hokuto and Kazume signed a deal in 2011 to allow the use of Hokuto four-cylinders in Kazume vehicles, and Hokuto reserved the right to use Kazume-developed all-wheel-drive systems in their cars and SUVs.

Nomenclature
The K2X rebranding introduced a new naming scheme for many Kazume models.

Current Models (Global – not all available in one specific country)

At some point ;D 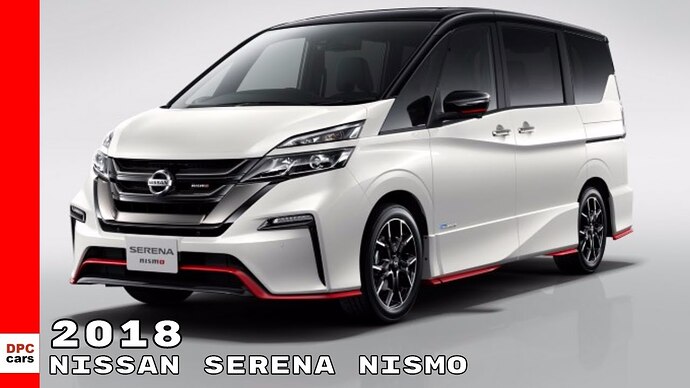 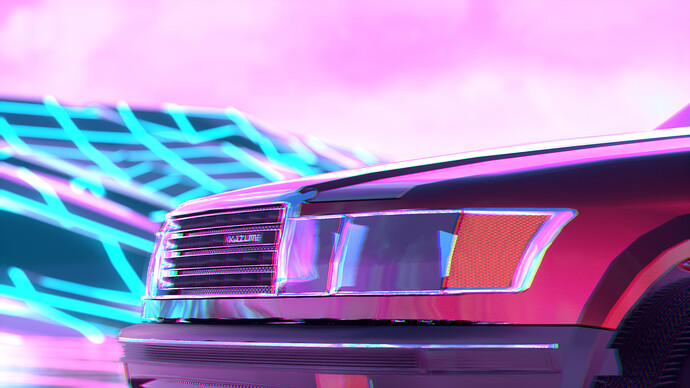 The car in the bottom picture is definitely an early- to mid-90s model, most likely one aimed at premium markets. I can’t wait to learn more about it in particular!

The Kazume 828 is an executive car that was produced by Kazume in Japan from 1986 until 1996. It was widely exported as Kazume’s largest sedan. They were often installed with luxury items and interiors as the 828 became the flagship offering.

The first generation 828 made its debut in 1987. It was an executive sedan meant to compete with the likes of the Toyota Cressida, BMW 5-series, and Mercedes E-Class.

Under the hood of the 828, you could opt for four different engine options depending on the market.
At the low end of the scale, the 3G-E 2.0L inline-4 making a modest 113 horsepower. The 3G-E was a common pick, and later became the one of the most desirable engine to tune because of its robust cast iron block and forged internals.

Next up was the 2G-TE, a 1.8L turbocharged and intercooled inline-4, which only made 7 more horsepower, but 25 extra torques. It also scored 2 MPG better combined, but at an extra cost compared to the 2.0L. 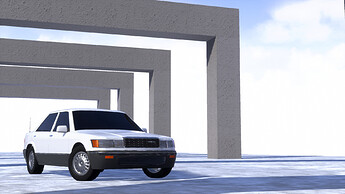 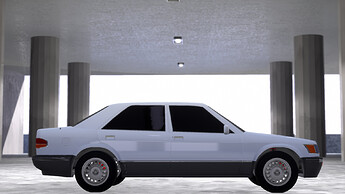 In Asian and European markets, a 2.2L turbocharged diesel engine was available. Producing 96 horsepower and 169 ft-lbs of torque, this engine could score in the mid 30s of combined MPG. Unfortunately, the 3G-TDE was plagued with injector issues.

The top of the line powerplant was Kazume’s all new 3J-E 3.0L V6, featuring all aluminium construction and multi-port fuel injection. This engine made 176 horsepower and an equal amount of torque, while managing an okay 17 MPG combined. The 3J would prove itself very reliable in the years to come, bar a couple timing belt woes.

Paired to these engines came a 5-speed manual as standard, or a new 4-speed automatic with overdrive, complementary of Hokuto. Thanks, Hokuto! Your transmissions are the best!

From the Hokuto Fiasco page:

“The 425LE was later known for poor reliability, and 5-speed models as a result command a higher price on the used market.”

Much of the 828’s engineering and many of its features were advanced automotive technology at its introduction, incorporating innovations that have been adopted throughout the industry. It had one of the lowest coefficient of drag (Cd) of any vehicle of the time (0.28 for the 2.0L/1.8 Turbo model with 185/65R15 tires) due to its aerodynamic body, that included a little bit of plastic molding for the undercarriage to streamline airflow beneath the car, reducing fuel consumption and wind noise. 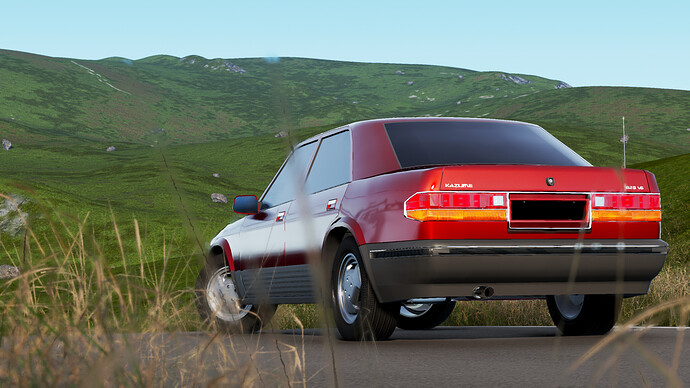 Trim levels were typical of Kazume, as sorted by engine size. The 2.0L was the base model and received standard interior equipment such as manual cloth seats, manual mirrors and a standard 8-track system. On the outside, plastic grille inserts, door handles and license plate surroundings.

Moving up to the 1.8 Turbo or 2.2D scored you some new options such as a cassette player, but the plastic exterior trimmings remained.

The V6 trim added leather upholstery, a premium cassette stereo courtesy of Nakamichi, and power windows, locks and mirrors. Outside, plastic trimmings changed to chrome, with a more pronounced grille.

The 828 didn’t appear in any video games, but did show up in some movies when dressed up as a VIP style car. A large, open engine bay makes for easy V8 swaps, as Hokuto UT V8’s are common and can fit inside an 828 with ease. 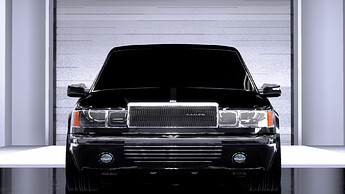 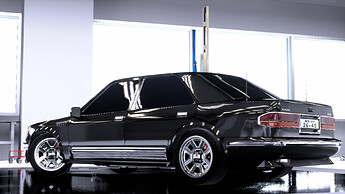 It’s been four months since this thread has been touched!

Allow me to show off a couple Kazume models I’ve made behind the scenes and on Discord :)) 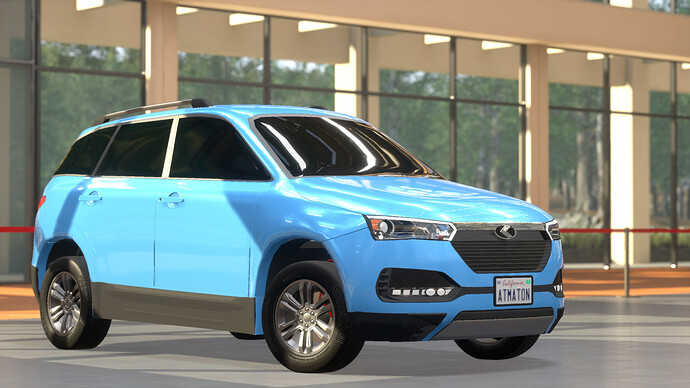 Unveiled at the last autoshow we had, I’ve changed it with help from Titleguy to make it look better.

A large body on frame SUV with a big V8, this is what I should have entered into CSR 103! 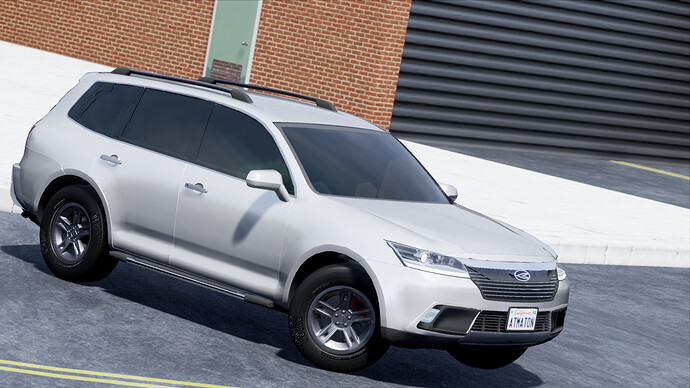 this is what I should have entered into CSR 103

I can concur. This one has even more panache than your actual entry - and I suspect that it, despite having a ladder frame chassis, would have had a better chance of qualifying for the top 10 there.

How would you know though? Cherry never gave out the stats of the car. There’s no chance of you absolutely knowing if it would’ve been able to qualify for the top 10. Not trying to put Cherry down, but I’m just seeing the flaw in your statement abg.

He might be going by the styling and the statement about “big V8” but I made it, so the tuning is probably shitE and probably wouldn’t have done much better anyways lol

Americans buy crossovers now. Not sedans. So how does one continue to sell them?

Make it stand out. 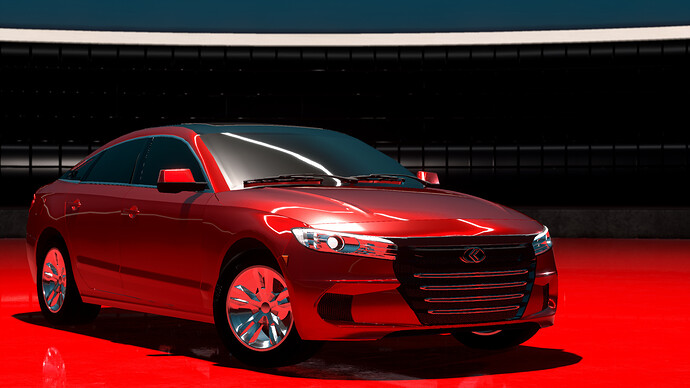 The Averis has been Kazume’s bread-and-butter family car since the 80s. Over the years, it’s always been the black sheep of the market, being outsold only slightly by things from Honghu and Corsica. That doesn’t mean that each Averis hasn’t been loved by someone. They’re still incredibly common on todays roads, many being 12 or 15 years old and still going, thanks to Kazume solidity. 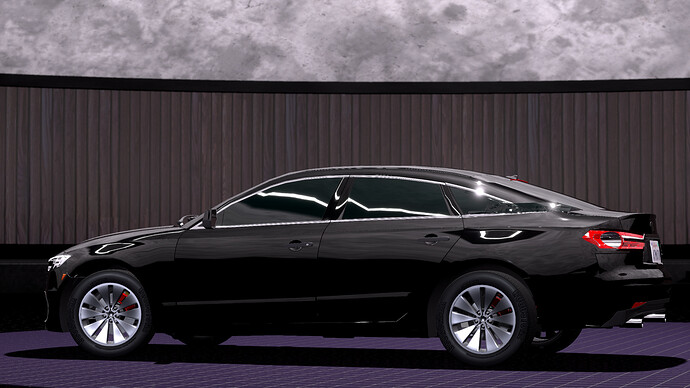 The 2018 Kazume Averis made its debut at the 2017 North American Internation Auto Show. It continued to ride on Kazu’s KGA platform, maintaining front struts and a 5-link rear suspension. Though to modernize the car, the front struts were redesigned for a more luxurious feel.

Under the hood, Kazume revised everything. Optional is the Kazume HR engine, a ground-up new-for-2018 3.6L H6 featuring full AlSi construction, direct and port injection and 280 #HRSPRS. This engine can be told apart design-wise with a chrome bar at the top of the black painted grille, and wide silver dual exhausts at the back. Standard is a 2.0L turbocharged H4, a carryover from the last generation. Tried and true. It produces 195 horsepower, plenty of torque, and scores a hybrid-like 36 MPG combined. And it has a ZF 9HP powering the front wheels. That’s all I’ll say about the transmission! 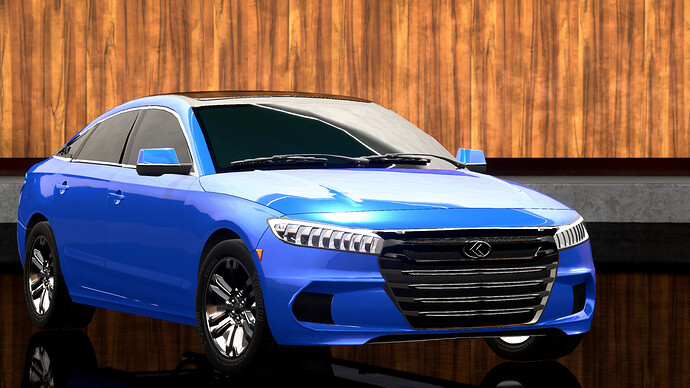 Design wise, I tried my best to make it original and realistic as possible, though the inspiration I took from the Accord stands out in the front. The base model Plus and mid-trim Preferred get the standard headlights, black plastic grille and some silver brightwork trimming. These models also come standard with the 2.0L turbo, though the big daddy 3.6 is optional on the Preferred. 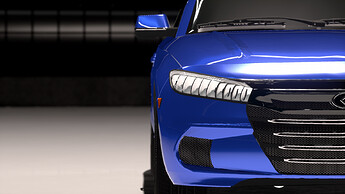 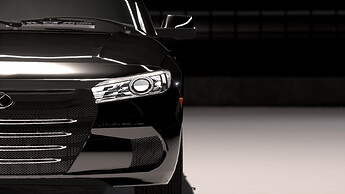 All models come with some form of touchscreen. The Plus comes with a 9.1 inch media display and backup camera. The Preferred gets you the 9.1 inch display with all of its capabilities (including Apple Carplay. but not Andriod Auto because Andriod is for losers lmao apple gang rise up) and all the rest of the safety crap that you shouldn’t need if you pay attention to driving. Stepping up to the Prestige model allows you the privelage of seeing at night with some badass looking LEDs. It also gets you an interior lined with mostly leather and some cloth bits, with aluminum or light matte wood trim.

Very Japanese, having multiple headlight designs, I like it!