Just a small announcement. It looks like most everyone who wanted to cast a vote has done so already, so I will close the polls earlier to give myself a bit more time to build Letara. I'll give everyone two and a bit more days to cast any final votes. Results will be announced this Saturday!


A quick interim update with the poll results:

Letara will have a Mediterranean climate, meaning mild but damp winters, and dry hot summers.

Letara will have moderately developed road, rail, ship, and air infrastructure, meaning that movement of people and goods is fairly easy in, out, and throughout the country by various means of transport. Improvement is certainly possible in all areas, but there are no major flaws or bottlenecks.

People of Letara live both in cities and smaller towns and villages. The capital city is a bustling center of business that still relies heavily on domestic goods from the countryside.

Currently, bauxite mining is a major economic driver by providing many stable jobs, and bauxite is the main export product of Letara.

Letara is a stable democracy where capitalist ideology allows companies to have a large influence on the future development of the country.

Last but not least, Letara is allied with its nearest neighbour Somunds. These allies have an open borders and open trade agreement, allowing for free movement of people and goods between the two countries.

I’ll go ahead and build the country in WR:SR now; stay tuned for the full reveal and Rd. 1 Prologue!

What game does that stand for?

(the abbreviation therefore would be WR:SR, btw)

Whoops! You’re right, in my haste I got it backwards. Not the first time I’ve done that. I’ll correct it in the post right away.

Letara will have a Mediterranean climate, meaning mild but damp winters, and dry hot summers.

Letara will have moderately developed road, rail, ship, and air infrastructure, meaning that movement of people and goods is fairly easy in, out, and throughout the country by various means of transport. Improvement is certainly possible in all areas, but there are no major flaws or bottlenecks.

People of Letara live both in cities and smaller towns and villages. The capital city is a bustling center of business that still relies heavily on domestic goods from the countryside.

Currently, bauxite mining is a major economic driver by providing many stable jobs, and bauxite is the main export product of Letara.

Letara is a stable democracy where capitalist ideology allows companies to have a large influence on the future development of the country.

Last but not least, Letara is allied with its nearest neighbour Somunds. These allies have an open borders and open trade agreement, allowing for free movement of people and goods between the two countries.

Ah, the irony of using a simulation of a communist government to create a Western-style capitalist democracy… Anyway, I hope this turns out very well in the long run.

Meh, the game mechanics of the other game are completely irrelevant here. I could’ve chosen from a number of other sim/strategy games I own, but I think that Soviet Republic just has the nicest balance of map size and visuals to accomplish my goal for some RP world building. You can take it as nothing more than visual fluff to spice up the immersion in this challenge series. 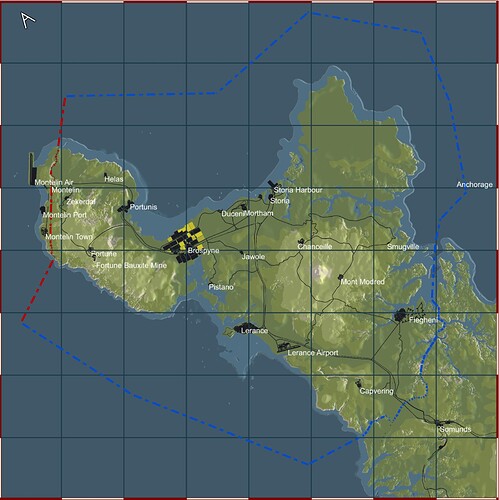 TL:DR - Letara is a moderately well-developed country with some economic struggles due to an ongoing political conflict with Montelin. Currently the country is mining bauxite ore that is refined to bauxite, which in turn is exported using ships. The road network is average for the era and has a mix of asphalt trunk roads, gravel and dirt roads to secondary and tertiary areas of the country. 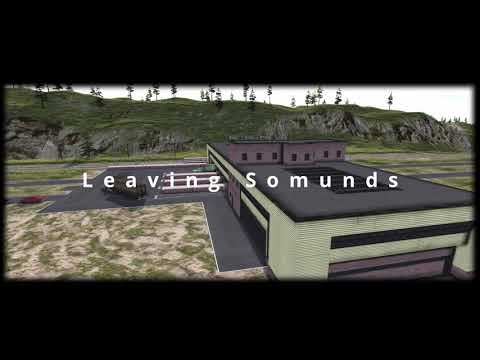 Drive-through of Letara starting in Somunds, hitting all major cities and towns, showing off some scenic roads. Perhaps a bit long, but for the hard-core RP peeps, here it is. Driving music included to get those creative juices going!

Given the current economy of Letara, most people just want something practical that gets them from A to B reliably and in relative comfort. In cities, roads are of good quality, but can be pretty tight, and parking space is at a premium. People do travel with their families to vacation destinations, including up to Mont Modred, but also abroad to Somunds. Just like everywhere else in the world, the upper echelons do like to show off a little, but they do want their cars to have tangible advantages over the cheaper cars that the regular plebs drive - if the car shines in any area they value (e.g. prestige or sportiness) that can justify the higher cost, they will buy it. People in rural areas have to contend with poorer road conditions and the lack of higher quality fuel, so they value some offroad prowess and above all else, reliability. If they can maintain and fix their cars themselves, all the better.

In game, the first round will span from 1946 to 1954 inclusive; models from any of these years are accepted for all three categories.
IRL, since this is the first round and a major update just dropped making everyone relearn how to build engines (and new hotpatches coming at a high rate), this one will remain open a little longer. Rules deliberation will be until Oct 3, on which date the round officially opens for submissions. The round closes Oct 23. @ 11:59 PM UTC.

In this period all cars are imported into Letara. All cars will incur a 20% import tax. To incentivise the existing bauxite industry and encourage more bauxite exports, cars with aluminium parts will receive a stackable tax break (up to 10% total):

No other taxes in this era.

In this early era there are not too many regulations regarding consumer cars. The government stipulates that:

The ongoing conflict with Montelin has resulted in the presence of many “curious visitors” with “totally authentic” passports roaming around in Letara and taking pictures of key infrastructure. How they entered the country is anyone’s guess. Luckily the Letaran authorities have been able to offer many of them “luxurious involuntary stays” in a government-run “hotel.” These “guests” do need frequent transportation from one secret location to another. The transport has to be both secure and covert. Therefore the government is looking to purchase a small contingent of people carriers with the following criteria:

You may submit one vehicle in this category. Participation in other categories is not required. Please name the model of your submission “LHC - 1G - <forum name>”.

Ahh, who doesn’t love a good car race? Letarans sure do! In 1933 the inaugural episode of a highly illegal annual race was organized: the Cannonball Run. It ran on public roads and created quite a few dangerous situations. Despite best efforts by the Letaran government, they have had no success shutting down the race series. So in a move reminiscent of “if you can’t beat them, join them”, in 1946 the Portunis Cannonball Run was officially sanctioned for the first time. The rules are quite simple. To reduce the impact of the race on regular road users, the race is in three stages on closed roads. The race starts at the Somunds border town after a hearty breakfast. The car that arrives in Portunis with the fastest overall time is the winner. After the race, festivities are held at the local wineries and the winner takes home a mini-keg of perfectly aged Fronaco Secco. The rules are quite simple:

A leader board for each year of the round will be simulated; obviously cars can only compete after they have been introduced (i.e. if you submit a '49 car, it will not compete in '46-'48, but will compete in '49-'54). Again, track times are simulated with RNGs, but reliability, comfort, and drivability do help. 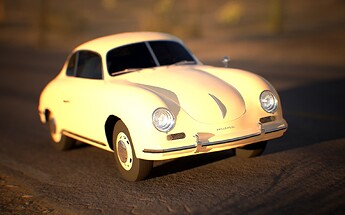 You may submit one vehicle in this category. Participation in other categories is not required. Please name the model of your submission “LHC - 1R - <forum name>” and include three team names in the DM if you don’t want your teams be called ‘team 1; team 2; team 3.’

Reminder that when you submit your first car, please also register your corporation. At the least tell me where the company is from, but a short lore blurb would be much appreciated - or a link to a lore thread. You will participate in all subsequent rounds with this registered company, so make sure it is the company you want to use for the rest of the playthrough!

Remember, so overarching rules are in the OP, so please read that too.

Most importantly: have fun! I’m looking forward to our discussions, RP wold building, and all of your undoubtedly amazing submissions!

One (unscaled) license plate required and must be visible when looking directly at the rear of the car.

Not yet in this era. Put on the car whatever you prefer.

gotta say that 0 flake looks awful on almost every car

Hence the allowance for 0.2. Usually between 0.1 and 0.2 is just enough to make it look like a nice non-flake paint.

I’m considering entering the 1G portion of the contest, currently trying to see what I can cook up.

What are the other categories for consumer cars? I only see the government prison transport vehicle, and the racing car. What other categories, like off-road or family budget are there, or do I just build for any other category?

What are the other categories for consumer cars?

If it’s like ALC, you just make whatever you want for the consumer cars, and they are marked against similar cars by other entrants

There are no “other” categories. For consumer cars you can submit any car that you’d like to sell to Letarans, as long as it adheres to the rules and regulations. The government assignment and race categories are completely different and aren’t consumer cars.

Edit: the advanced trim settings stuff is now updated. I think you need to use the tyre sidewall curve setting to play with the whitewall visibility, which is allowed. 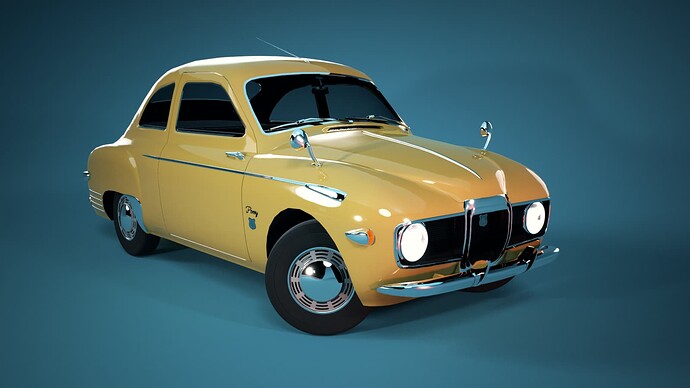 HiResPhoto123_1,600-9001600×900 62.1 KB
Torshalla was founded in Sweden after the in 1946 to make use of now unused munition factories and to improve the quality of life of the average citizen. After six years of building prototypes and developing tooling, their first car, the Poesy, released in the fall of 1951 as a '52 model. Many elements of the Poesy’s design were considered quite forward thinking, with a monoque steel chassis, a direct-acting overhead cam 1.1 liter boxer four powering the front wheels, and a host of advanced safety features. 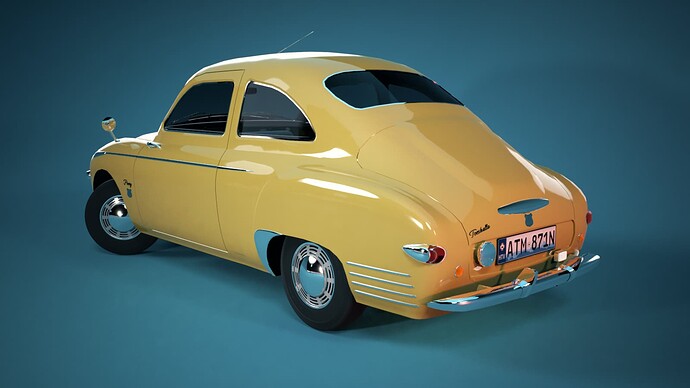 HiResPhoto125_1,600-9001600×900 60.5 KB
It was decided that exporting the Poesy would greatly help with sales and offset the cost of development. Letara was considered a suitable market. Available only as a single trim, The 1.1 liter engine made 40hp @ 4900rpm and 51 ft lbs of torque at 3300. Equipped with two SU carburetors, it proved to be fairly responsive for a family car as well as economical with a recorded 26mpg. An AM radio was fitted as standard, as well as a four speed manual transmission and a short ratio steering box. It even included an auxiliary reversing lamp. After import taxes the cost of the Poesy is $18,600 AMU. 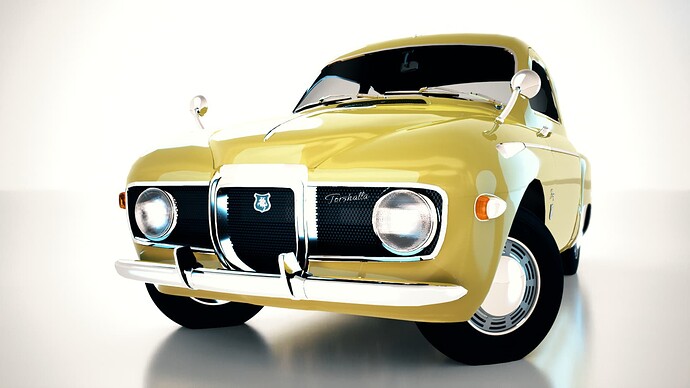 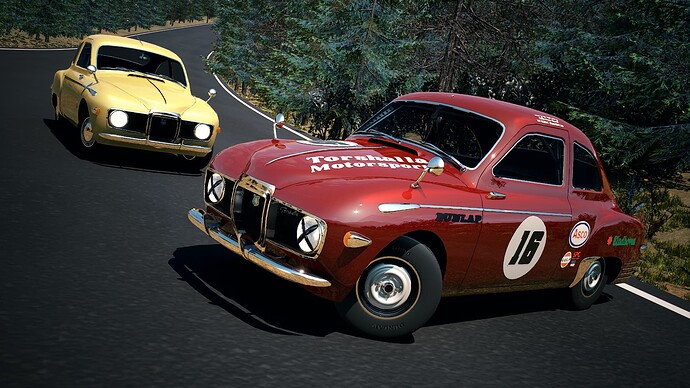 HiResPhoto130_1,920-1,0801920×1080 280 KB
Motorsport is of course a good means of showcasing one’s product line, so the decision to prep three cars for the the Portunis Cannonball Run. The engines were extensively reworked; bored out to 1.2 liters, ported heads, larger carburattors, tubular headers, and dual exhausts. These changes help boost power output to 60hp and 57 ft lbs of torque. Along with stripped out interior for reduced weight and wider P155/95C13 tires, the PRS Poesy has a higher top speed and shorter 0-60 time. The drivers for the three cars are factory test drivers Jorgen Gulsvig, Anniken Bach, and Mikkel Sundheim.
14 Likes
← previous page next page →