I suggested this scenario when the call for scenario suggestions went out, I was quite excited to find that I was selected for the demo and I was even more excited when I became the insane scenario. 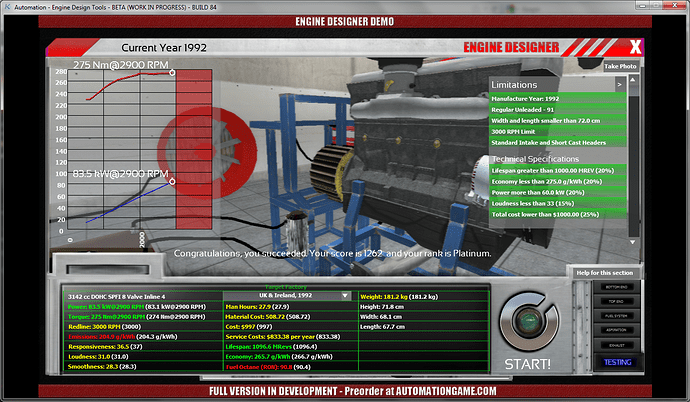 nice! im having a go at it now - with, well lets just say not to much success

I got it to 1247 points. Gonna try for some more over the weekend, but I really have no idea what else I can do to squeeze some more out of it.

I got so close last night. I have everything better than what was required except I could not get under 0.6 economy.
Ended up running out of time and I had to go to bed (was getting to late) because I have work today.

I am going to go back once I get this last one done and try for better scores on all the challenges starting over again.

Ugh, I can’t compete with those scores.

Managed 1215 out of it, that’s where I’m hitting the wall. It’s real quiet though, and makes a lot of power. Still way under where it needs to be for fuel economy, even with the fuel trim set to 100, lol. I basically just made an engine that wants more and more fuel (power was going up just slightly faster than economy, for a net gain of like .2-.3 points score per point of fuel added). I feel like its got a little more in it, but I end up running out of RON before I can add any more timing or compression. Good challenge though, definitely had to think on this one until it clicked. First scenario that I maxed out.

What head type are people running for this? I made semi-successful ones with both SOHC and DOHC heads. 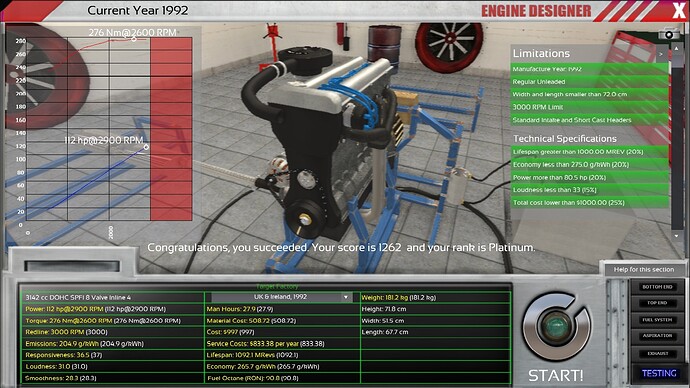 Highlight text underneath to see spoilers
To anyone struggling, just remember that some parts synergize/tunings well. Don’t just experiment with changing individual things, because you’ll probably find that some of your other parts/tuning is ill-suited for the new part/tuning.

In this case, to make the engine fit size requirements, it’s DOHC vs Pushrod. What sorts of parts might be good in a higher powered DOHC engine that would be wasteful in a pushrod engine?
End of spoilers