I’m trying to make a 1 litre inline 4 that has both excellent power, economy and emissions… a bit like the Ford Eco-Boost. So with an extra cylinder I should be getting better performance, but I can’t seam to get more than 24% economy and 120+ bhp. Whether I am terrible with turbos or some other reason, I just can’t do any better than my N.A engines either. So has anybody got any good tips to help me out?? 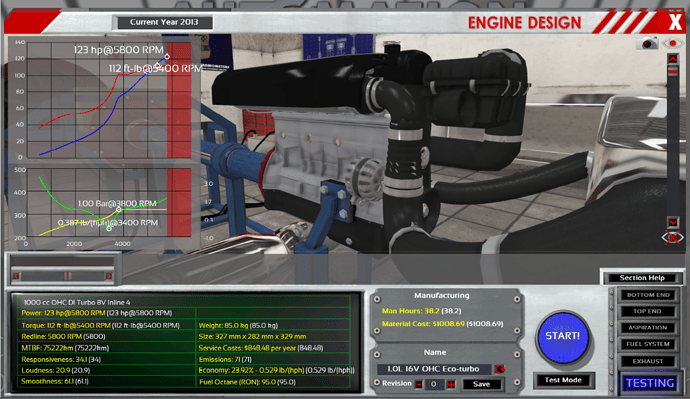 To get better eco in Automation you need to run at lower boost, try 0.4 Bar, but that will limit your power of course. 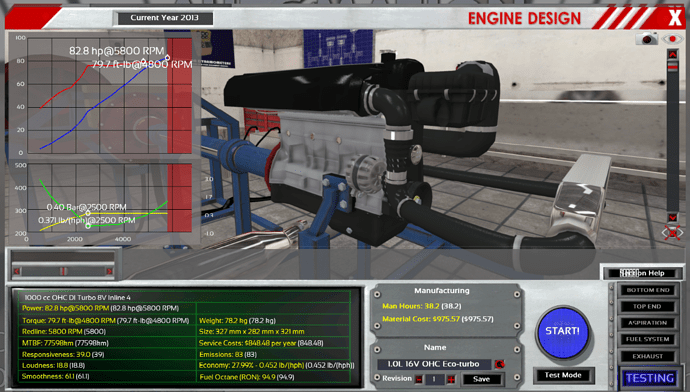 However, look at the resemblance of the turbocharged engine vs. this N.A. engine. There is barley any change in power or economy… It is pretty much the same engine! Is this supposed to happen!? 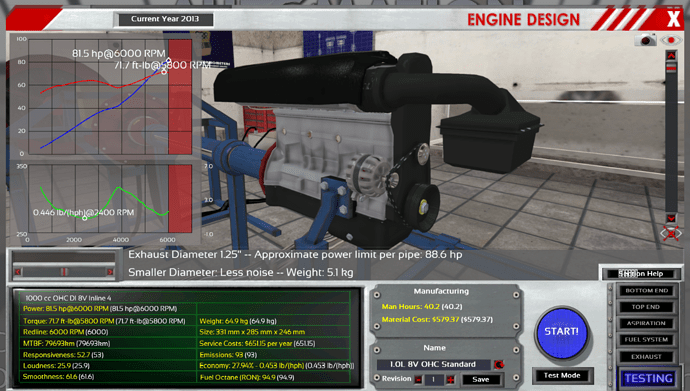 I can see that the NA has got VVL and the turbo has not (?, I guess so). That surely makes part of the “non-difference”, because the NA engine can run with much higher compression then. The cam profile of the turbo engine does not seem to be very low, too.

Try 4 valves per cylinder. I don’t know if it will make a difference but seeing that your engine is only 2 per cylinder it might make an improvement on the fuel injection and how the gases are released from the cylinder

4 Valves/cylinder = MOAR POWER!!! but it will cost more to make as a result

Der Bayer… that’s where you are wrong… they both have VVL, but checking them the N.A. doesn’t have VVT (which makes virtually little difference on the performance anyway). And Junno, power isn’t everything… but when you want more power, you would expect a bit more of it when you give it a turbo… Wonder what the Devs think of this…

View also this topic viewtopic.php?f=15&t=2657 - Sorry about my impatience

Hm, I was mislead by the NA engine needing more man hours then.

Long headers can make some of a difference, but on the small economy engine I made for my fuel efficient hatchback, the man hours and cost out weighed the performance gain. 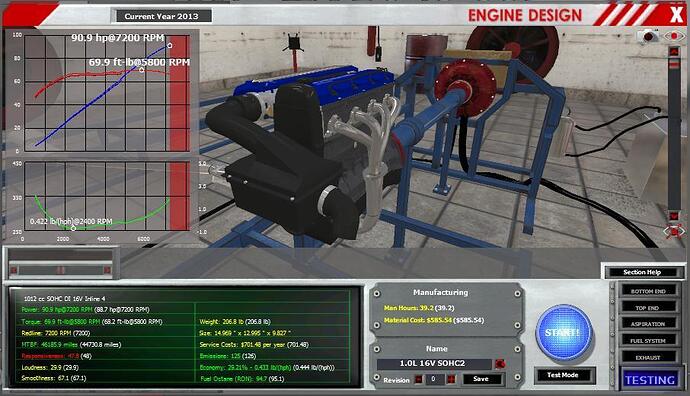 I think you guys are overlooking 2 things…

Yes, both engines make equal max power and have a equel best econmy, but when looking at the graph you wil see that the Turbo engine keeps up the nice econmy acros the rev range (see 4000rpm) and also seems to have a wider power band.