facepalm just reread the rules and i was keeping 70% competitiveness in muscle premium not muscle. going back to the shed to iron a few things out. 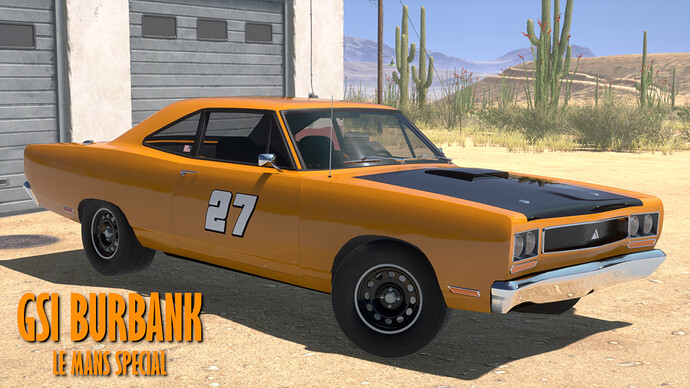 Certainly a wonderful entry to the field.
This marks the fourth contestant and the sixth cup car to take American muscle to the French roads.

I’ve got a question about reliability.

Is the number of 50 is only for the engine or the lot, I mean the number you find at the one to last page?

It is for everything. Survivability of the engine isn’t the only problem for a car at Le Mans.

My entry for this challenge! 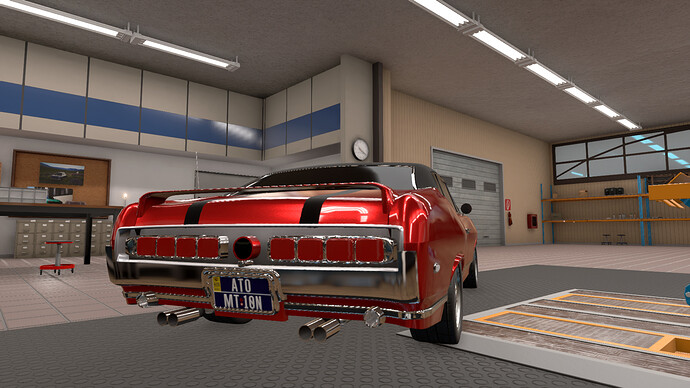 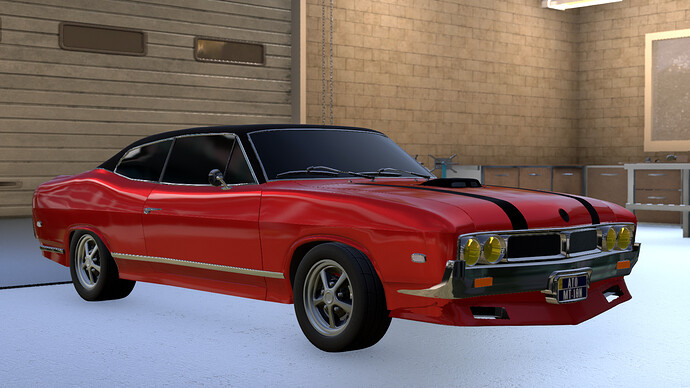 The street version comes standard with luxurious rich paint (black shown), stylish chrome accents, and prestigious side exhaust pipes to deliver a satisfying V8 rumble. If you want to make a statement, this car is for you! 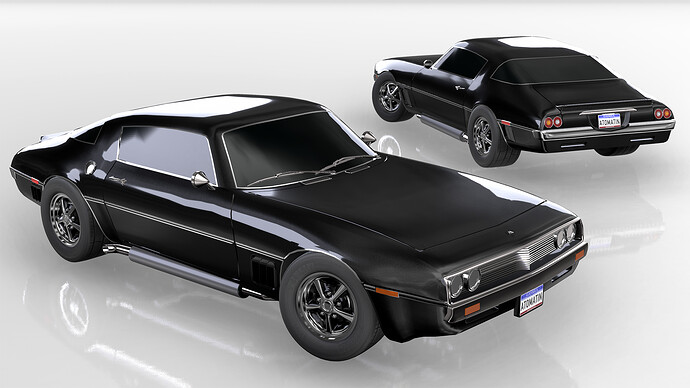 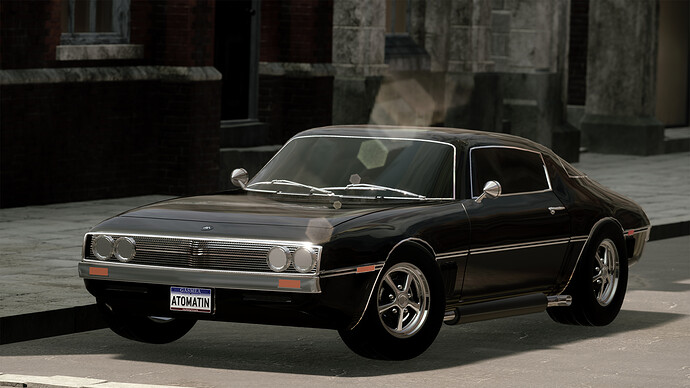 The sport version has an eye-catching orange and blue livery, enhanced air intake and aerodynamic enhancements for improved performance, and larger vents front and rear for enhanced brake cooling*. The side exhaust has also been re-routed to the rear for added protection and enhanced gas flow.
* Don't worry, for this competition aero is set to 0 and is decorative only. All other fixture changes are decorative only as well - the two models are mechanically the same in terms of the game. 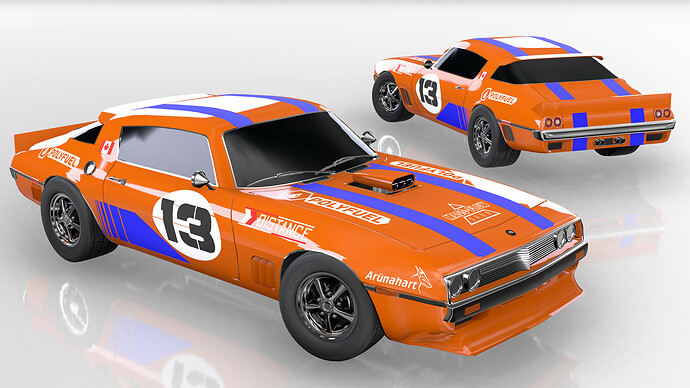 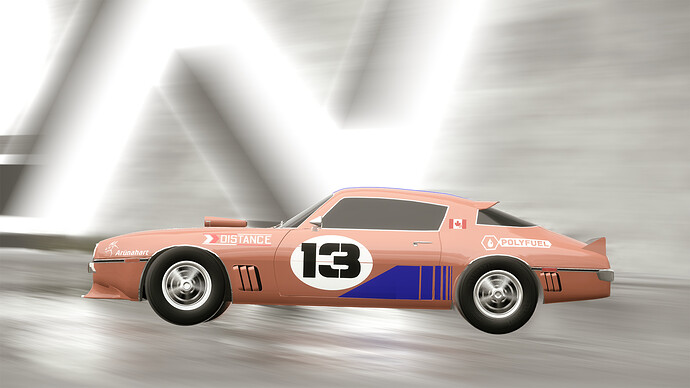 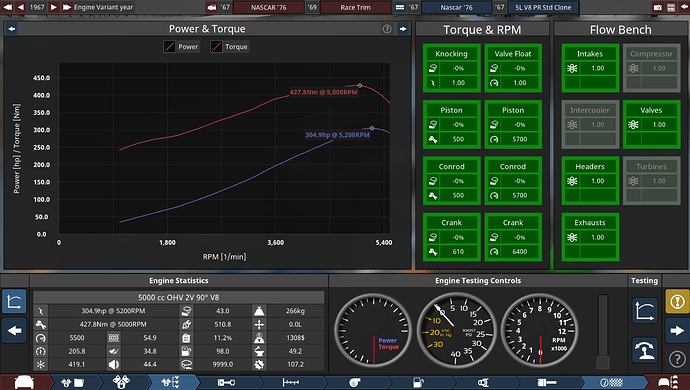 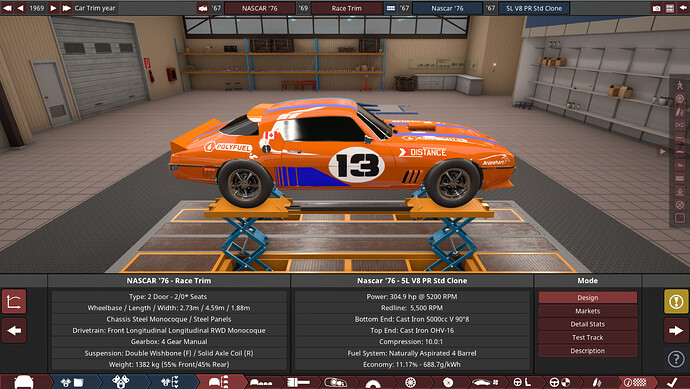 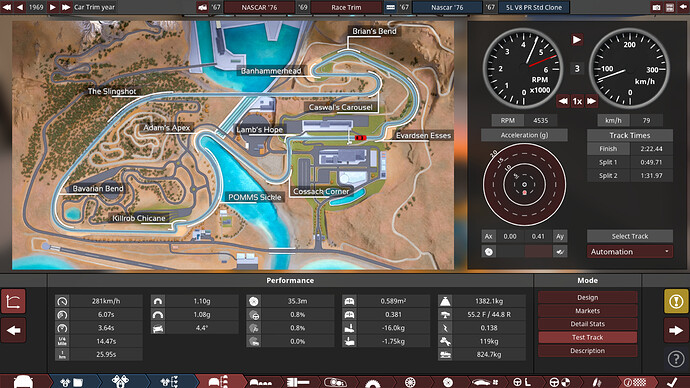 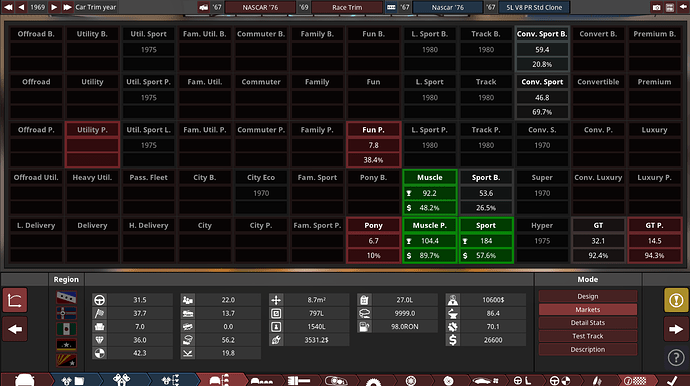 A lovely new addition. I suspect those Europeans will be in for quite the shock on race day.

Not sure if this is still active, but I decided to try the challenge anyway for myself and I am still tweaking my cup car, but I finally beat the qualification time of Hershel McGriff with a 4:28.7 time on La Sarthe (for what it’s worth on a simulation).

It’s as active as the community deems fit. I reckon it would be your cornering that saved you time. The steel monsters struggled there.

No wings or spoilers

Not that I’ve got a problem with this personally, but the entrant pictures don’t seem to be complying. Maybe they could be allowed. Even with wing angle set at 0, they do have an impact on lift and V.max.
(This post might also be because I’m jealous.)

I feel that the aero shown here is more along the lines of the typical muscle car and not the crazy wings of, say, the Plymouth Superbird. I wanted to stop those from appearing (even if they look sick). 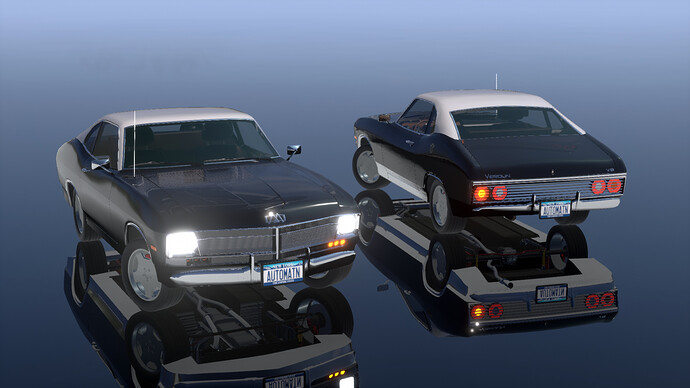 The Verdun V8 was designed by Angus Automobile in 1967 and launched on the Canadian and American markets in January 1975. With 278hp and 321 lb-ft of torque, the 327 engine running on regular unleaded packed quite a punch. It was luxurious and comfortable, but with a styling that was unfortunately not as popular as expected.

The compact muscle car did not sell incredibly well due to its smaller size and styling compared to competitors, and the fact it tended to oversteer at lower speed due to its short back design. However, it did very well on the track with the R/T version released the same year. 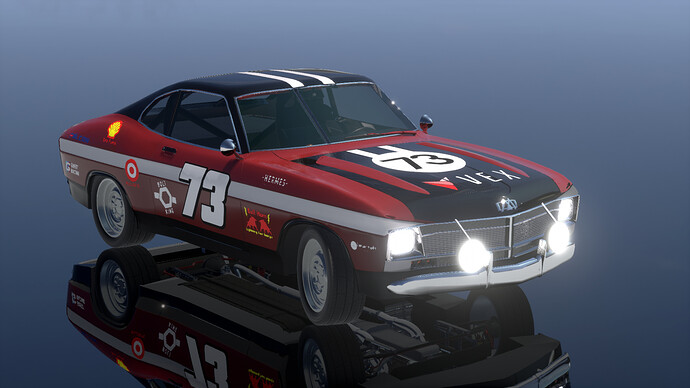 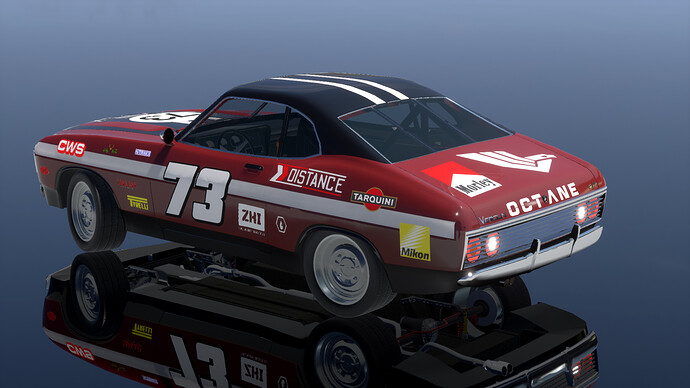 The R/T trim was launched in 1975 as well and was homologated by Octane Racing for NASCAR. In 1976, Octane Racing released a modified version as a Cup Car for Le Mans - and thus the Verdun Octane R/T Cup was born.

With enlarged wheel wells to account for the wider rear tires, sleeker side mirrors and door handles, stripped interior with a bucket seat and rollbars, extra headlights, an enlarged 354 cid engine producing 329 hp and a astounding 380 lb-ft of torque, and a top speed of 289km/h, this Canadian beauty roared on the oval all season and is now ready for the ultimate challenge : La Sarthe.

Note: I used mods, like everyone, for fixture styling - hope that’s ok. I did one stock version without all the moded fixtures tho. I did not put any aero components at all. Engine reliability is slightly under 50 - without redoing a whole new engine or starting earlier, I couldn’t bring it above. Fuel econ is 22.3 L/100km on the cup car version, better than the 23.9 on the street version - quite fond of that high torque 354 engine.

I love the look. The engine reliability, while lower than desired, is probably better than whatever the reliability was of the two actual cup cars that raced. It just means that you’re taking a bit more of a risk. Other than that, interesting headlight design and good job!

The engine reliability, while lower than desired, is probably better than whatever the reliability was of the two actual cup cars that raced. It just means that you’re taking a bit more of a risk.

Yeah, I decided to roll the dice. It would have been nice to try to get that V8 working on 85 RON. I think they failed (quickly) on La Sarthe in large part because the octane quality in France at that time was quite poor, like effectively 82-83, and I guess they also shifted more in a single lap than a whole NASCAR race. IIRC McGriff’s team tuned the engine for 90 RON instead of typical 98, expecting octane to be poorer, but that was still not low enough.

Getting that 50 reliability on the engine is not an easy feat tho, not sure who here was able to achieve this. If I started earlier (65, maybe 66) maybe I could have made it with a few more quality points and ET buffer. However, already 7-8 years to design it is quite long. My engine is also nearly squared (98.3 x 95.5) to try to lower bore as much as possible but not use heavy cast (lower reliability) and get better Fuel Econ for Le Mans.

It was an optimistic number, I’ll admit. It’s just that the oddity of this whole situation and the potential success of cup cars at Le Mans intrigued me. I figured 50 reliability would be a good ballpark figure.
Also, Nascar had been doing the Riverside 400 for years, so shifting more often than on an oval wouldn’t have been too unheard of.

Well, guess it’s about time I released my attempt. A few things before I show it off:

The photos and backstory will be released later today!

In Archana, a young businessman named Mikal Lamb paced through his old factory. It had been his father’s back in the day as an appliance producer. However, due to certain “international events,” it had been converted into an utility vehicle factory. Mikal inherited it and decided to produce cars. The handful of cars made by Lamb Manufacturing during the late 40s and early 50s were mostly budget utility vehicles.

Mikal Lamb raced on occasion, using his salary to fund entries into lower level touring racing. While his results were mediocre at best, they made him consider the possibility of making a race car of his own.

By 1965, his factory had been dormant for nearly 7 years. Eager to try his hand at motorsports, he rebranded his company as Lamb Motorsports and convinced a former engineer of his to return and design a muscle car for both commercial and sport production.

Three preliminary designs were drawn up and subsequently discarded. A fourth design underwent engineering starting in 1967. By late 1970, the heavy steel monocoque was ready, but the engine was still a ways off. Finally, in mid-1974, the engine was complete. A 5.8L V8 with 361hp and 391 pounds of torque was the end result. Despite the power, the car (now named the Ram Lamb) got 9.6 mpg on premium leaded fuel. 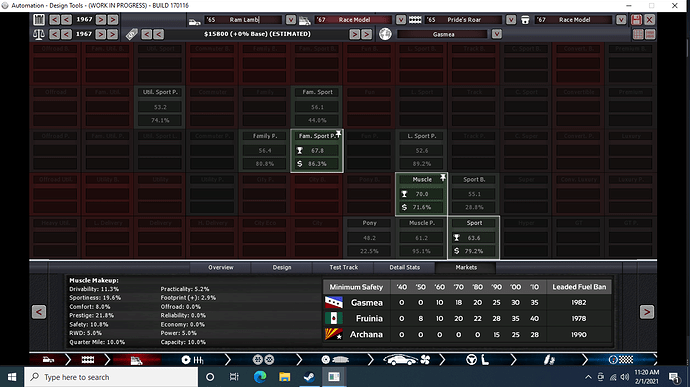 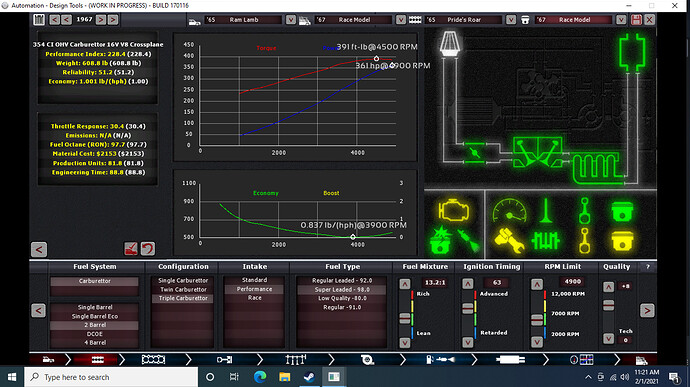 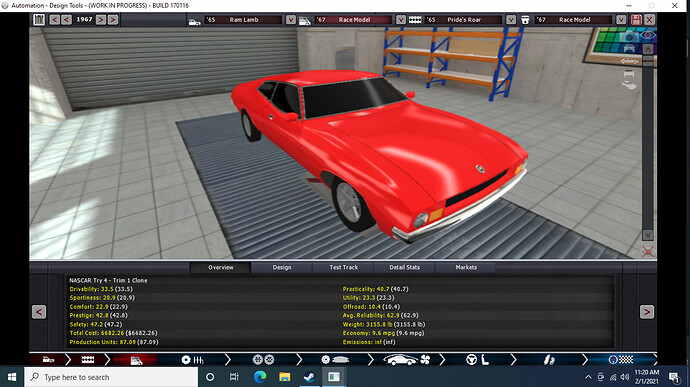 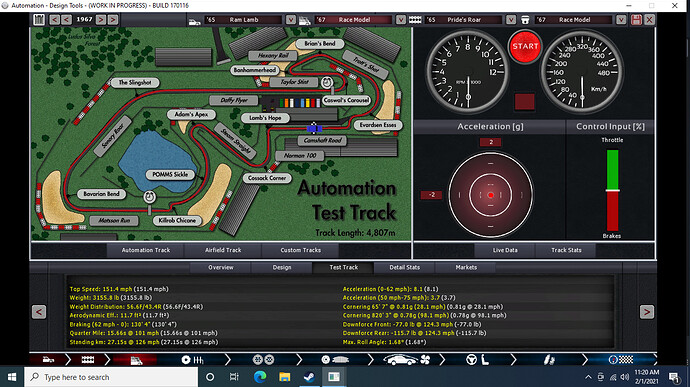 The relatively low price (sub $16k) combined with the 151 mph top speed saw independent teams picking it up for stock car racing, although its low top speed meant that it most often saw service on short tracks. With the proper tires, its ride height made it suitable for dirt oval racing and made a name for itself in the modified scene. Drivers began nicknaming the engine as the “Pride’s Roar” due to its loudness. News outlets began calling the engine a “Lion is a Lamb’s chassis.” Through some smooth-talking, Mikal convinced NASCAR to include one of his cars as an entry at the 24 Hours at Le Mans.

Dude, you’re still playing on the Kee engine? I applaud you!