Noma Engine Works, an idea first conceived by Stanford Noma in 1929. Born into Detroit, Michigan in 1915, Stan was raised around a very strong presence of a booming automotive industry, which would come to fuel the idea for his company. All of a sudden, the stock market took to a downhill sprint and crashed, leaving the young Stan at a crossroads, either go and work to send money home, or stay with his family, the choice was obvious. After 9 years, conflicts were rising in Europe, and so was the American economy, it was also in 1939 Stan took the biggest risk he’d ever taken and took out a loan to buy a garage and all the equipment needed to produce engines at a nominal rate to sell to the army. His risk had paid him off in 1946, substantially enough to be able to buy a cheap working factory and a scrapyard to increase income and ease production costs. Then finally, after many long years of toil and hardship his dream was finally coming true. Stan recruited some, which would later turn out to be, lackluster engineers, to design the first engines for the company during the late 40’s. The engines produced by this company will be posted here. 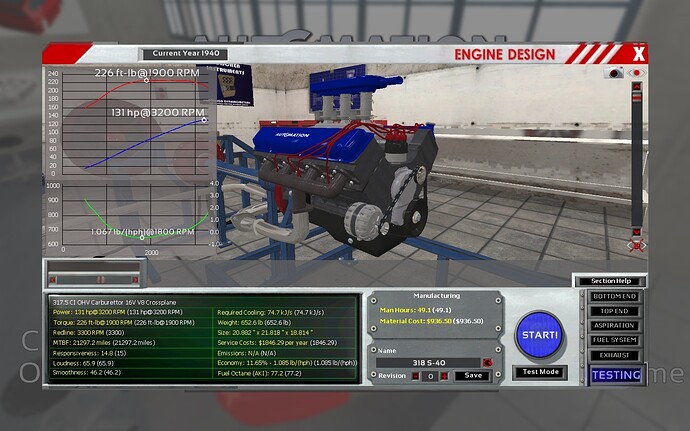 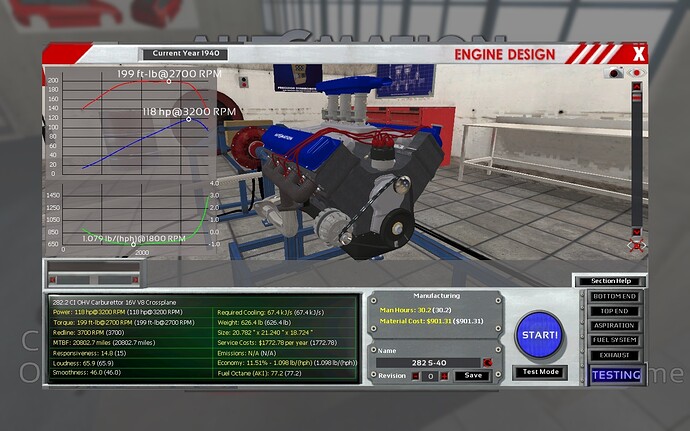 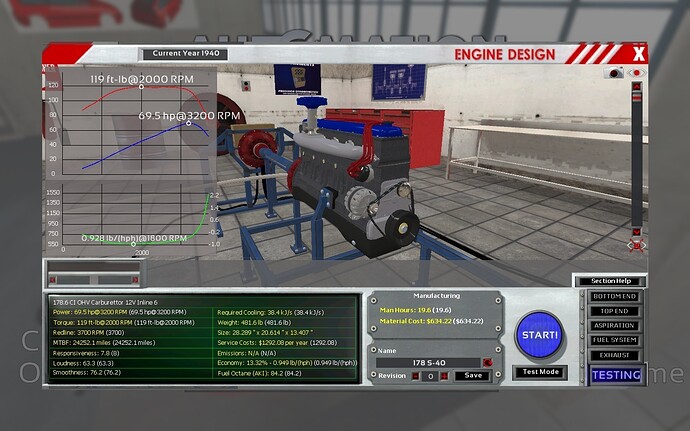 Some questions I have:

Looks right for a government contract

Possibly, but why limit horsepower? I understand the cast log headers are great for making <2,000 RPM torque, but at the cost of 20+ horsepower? And I didn’t realize that any government at the time prefered the low quality unleaded fuel (even though it is quite a bit cheaper). Don’t get me wrong, they’re excellent engines, but I just couldn’t help but wonder.

I was refering to the two running 77 octane. Did they really use 77 octane at that time?

Hello Samsheepdog, thank you for your comments, regarding the use of low octane fuel in the war, 80 octane was known to be used by the 1100 cui ford GAA, which only had 7.5:1 compression. So that, plus the fact that i’m trying to stay with the backstory and engineer less than good engines, is why all 3 are rather dull engines. As for the cast manifolds, purely for the fact that they were just inexpensive and cheap to machine, i hope i’ve provided some insight to your questions.

For further history if these were army engines their tolerances would have to be higher to allow for various fuel types and for impurities due to storage and handling.

First off, thank you Samsheepdog and nialloftara for posting questions and insightful texts, i hope to see more, it is genuinely appreciated as i wouldn’t have done the research and found out i could have improved the octane, or stopped for a second and improved upon mechanical and environmental resistance, thank you again. Second, i give you the first actual production engines built for vehicles in 1946, featuring 1 full production V8 for larger and more robust vehicles as an option, 1 order only V8 for customers whose old engines couldn’t quite cut it anymore, and an I-6 as standard equipment in cars/trucks. 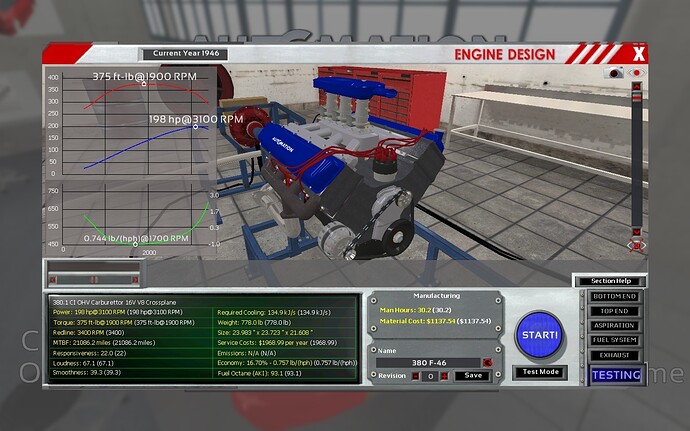 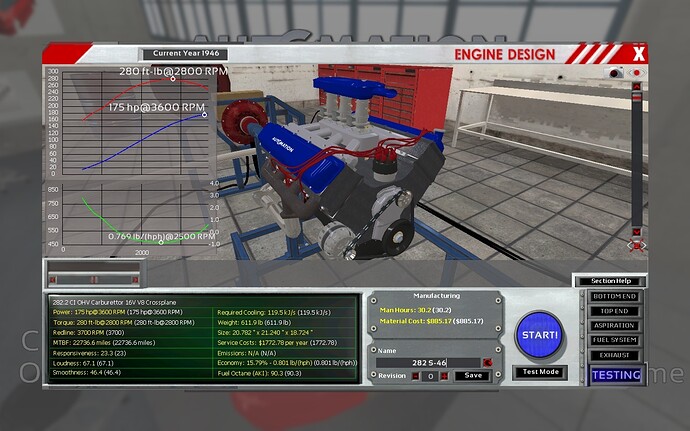 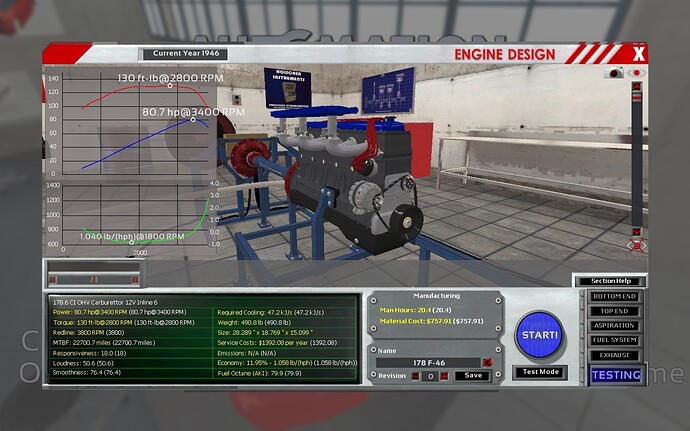 Welcome to the third installment of engines from Noma, Featuring 3 V8s debuting for the 1950 model year, redesigned by new more experienced engineers freshly hired to get a more satisfactory job done. Including robust improvements in exhaust flow with short cast iron headers, 2 barrel carbs and stronger camshafts with stiffer valve springs for improved power and durability. Also, all of the engines from here on out, now have the capability to interchange parts reliably, as they all share mostly the same size components, even the I-6s, and fit each other with no hesitation. 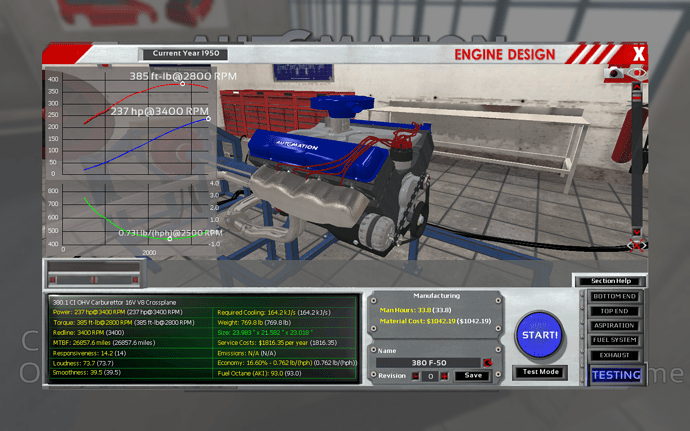 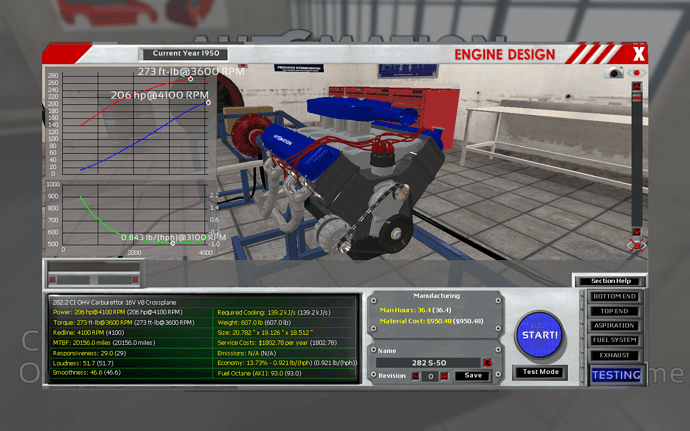 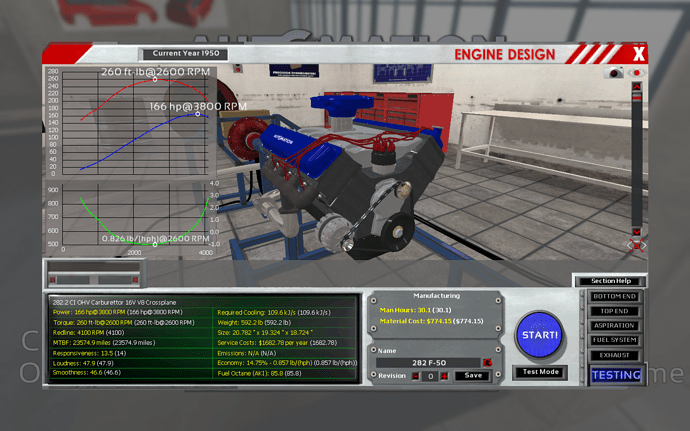 Very impressive torque numbers for the year, my 40’s and early 50’s V8 couldn’t handle more then about 250 before it warned of failure. Keep the excellent engines coming.

Thank you nialloftara, i must say though, Centauri Industries put out potent, high horse V8s for the 50s and 60s, very competitive engines my friend, keep your work up.

Ah, I understand now. Keep up the great work!

The engine picture got lost in the server shuffle but that 428 is a monster! I can’t wait for the next update so that can fit in a car body, I’d love to see a head to head of the test lap with comparable car models between my lighter more compact but less powerful '57 Titan B3f and that. I’m excited to see what comes out of N.E.W. in the 60’s.

Finally, i present to you part of the engine lineup for 1965, featuring 1 new big block, and 2 revised big blocks. ( My apologies for the short intro, been trying all night to get this up, its 12 AM here

, feel free to leave criticisms, every one is welcome and appreciated 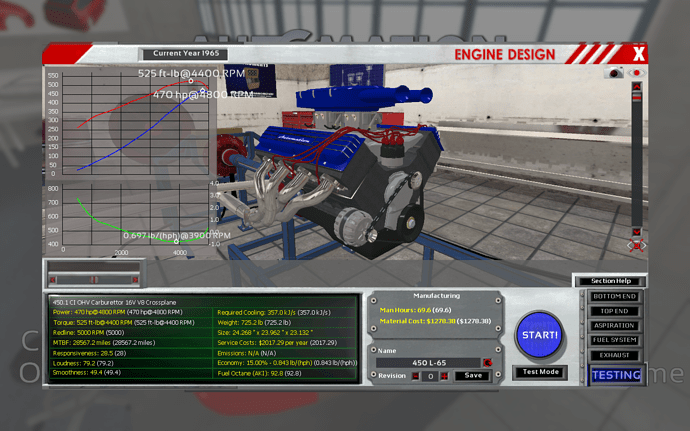 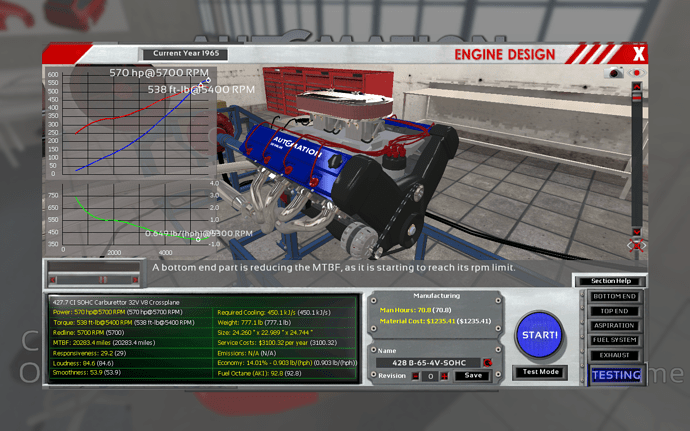 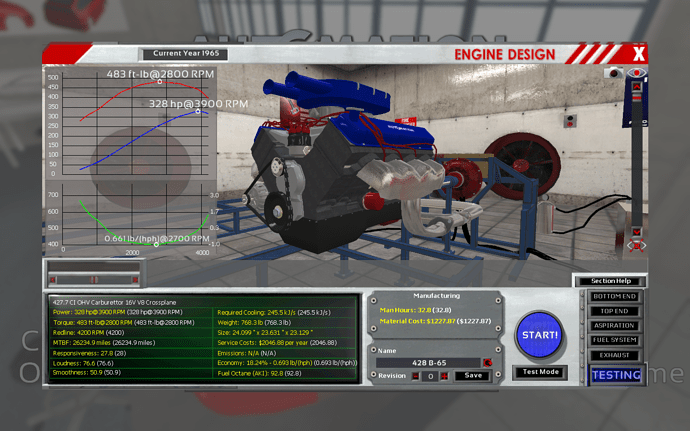 And now the other engines i could not fit in the last update, 2 small blocks and 1 big block. The first engine is the 282 F-65-HC, the second engine is the 380 LF-65, neither of which have been updated since 1955, are included this time around. The third engine is the 428 NOPO-65. There is one more thing in this update which is the introduction of the NOPO nameplates added to special order only engines, which take less than or equal to 1 week to produce, and are generally regarded as stage one race motors due to the high stresses they can handle and the horsepower that is put out. 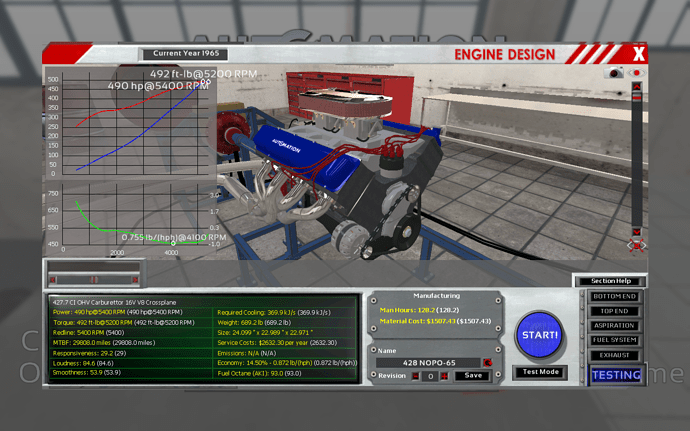 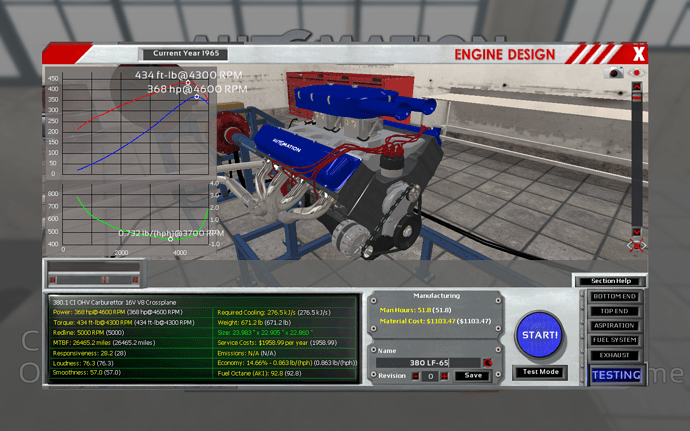 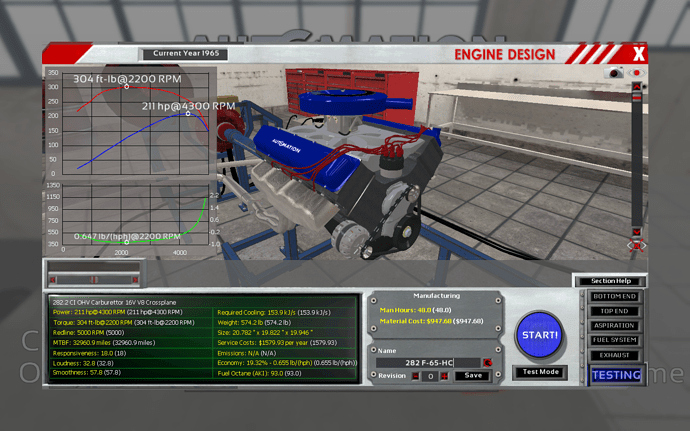 You make pretty good engines. I do have another question now; why do most your engines have torque curves like this

Good question, I started out wanting to produce OHV engines with as flat a torque curve i could, but got carried away with motors that have more power and torque. So, Samsheepdog your question is of value, and a wake up call, this made me stop and think about what i’m doing, which is good, so thank you again for asking another question about things, its stuff i would’ve overlooked.