Ravencraft Automobile started out as the combustion motor building subsidiary to Ravencraft, itself an engineering company founded in 1897 in northern Austria-Hungary, what is now Slovakia. The original company was formed as a consorcium between 12 investors from Austria-Hungary as a mean of producing top notch mining and transportation equipment. After the flight of the Wright brothers, and the overall fascination of human flight, the company renamed itself from Rabenwerke to Raben-Luftwerke and started producing airplanes. Raben-Motorwerke was then created as a subsidiary, given the task of developing and producing engines for these airplanes. Following some limited success in aeronautical engineering during WW1 and the subsequent disolution of Austria-Hungary, Raben-Luftwerke found itself in the newly formed state of Czechoslovakia. The overall antigerman feelings caused the company to rename itself to something more suitable, and given the fact that it was just considering a movein to american markets an english name was chosen, thus the name Ravencraft. Raben-Motorwerke renamed itself to Ravencraft Motors and during the interwar era produced many engines, focusing on lightness and reliability. Just before the disolution of Czechoslovakia during the Munich conference, the company was starting to take over the whole engine market in Czechoslovakia. During the second WW, the company was split between the two sides. The parent company managed to evacuate the majority of it’s engineers and scientists to France just barely before the Vienna award, thus effectively breaking into two. The parts that stayed were transfered under Daimler and helped the nazi war effort, while the evacuated parts together with western trade deputies served the Allies. After the war and the Soviet takeover of Czechoslovakia, all private owned companies in the Soviet-block went under goverment control and Ravencraft joined up with Skoda and integrated itself into what is now Skoda-Auto a part of the Volkswagen group. The western parts managed to profit during the war, thanks to a lot of technology patents it held from the interwar era. After the war, they moved all their assets to their biggest market- the United States and slowly withdrawed from Europe. It was in this time that Ravencraft Motors, which had the majority of it’s assets in Europe, called for a greater independence and eventually in 1961 the company split into two, Ravencraft Automobile- formed from Ravencraft Motors, which was already producing not only engines but whole cars, and Ravencraft Aerospace, which became a big player in aerial and space flights. Ravencraft Automobile focused itself around the original thinking of Rabenwerke- reliability and lightness. But more of it’s cars and succeses (and failures of course) later

Some fotodocumentation:
the original Ravencraft logo 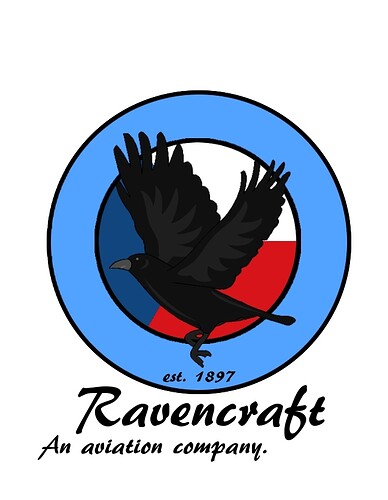 Wow, talk about a story

part of my lore from some other games

combined togehter in the course of time

Cool name. Kinda reminds me of a video game.

Ravencraft Motors Lark
A direct competitor to the famous Beetle, the development started soon after the second world war, with the intention to provide a reasonably cheap and reliable car for the normal everyday family. Future improvements were considered into the design, but ultimately, the research costs and the focus on a transfer to jet engine production hindered the efforts to start the production in 1946 and the car only rolled out in 1949. This was the first car Ravencraft ever created, but the engineers working on it had experience, notably the emigrants from Czechoslovakia which used to work in companies such as Tatra or Škoda. Neverthless, the development costs and the inexperienced manufacture (which was automated only in it’s basics) stole a lot of the profits from the company and overpriced the car. This would of course get better with time. It was also the first use of the distinctive front grill design, somewhat resembling the wings of a bird. 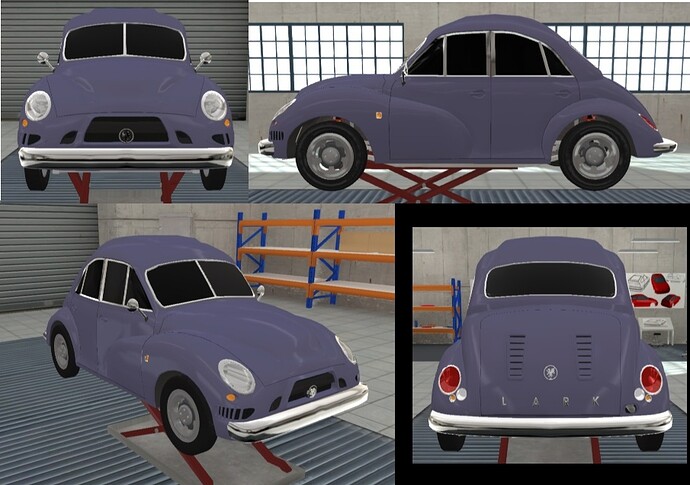 The car sold reasonably well and the company was looking for ways to improve the design as soon as 1950. A potencial hole in the market was found for low cost utility vehicles, thus the Lark Utility version was born. The engine (I4 888cc 8V) was improved upon, now giving just slightly below 50hp and further boosting it’s reliability. The new version was called R-50 and slowly started to push out the old engine. 1950 also brought a small facelift, the final version of the front grill, fog lights and chrome door handles.

The Utility version found a surprisingly big amount of popularity as a milk delivery vehicle.

The Falcon has it’s roots in the begining of the fifties, during the great boom of prosperity after the war. Ravencraft was a company producing airplanes and jet engines. Somebody in the marketing department saw this as a potential thing to exploit. In 1949 a letter with a suggestion was found laying in front Michal Sikora, the then CEO of Ravencraft Motors department of research and design, suggesting a development of a sports car. This was an opportunity. Airplanes and sportcars had many similarities and it was decided, that the car should be made. But problems arose as soon as the idea got to higher places. The leadership of Ravencraft didn’t want to waste resources on something that would be like a fighter jet, when they were building fighter jets! Mr. Sikora was relentless though. He was bringing the idea up on every meeting and by 1951 managed to convince the CEO of Ravencraft-Motors, who started putting pressure on the leadership of the whole company. The process was slow, but with the leavement and death of some of the more conservative members of the leadership, the idea was finally granted in 1953. Mr. Sikora was appointed as head of the research team and they got to work. It was decided that a new engine was needed, one that was bigger than the I4s used in the Larks, but smaller than the powerfull aviation engines manufactured by the company. The new I6 was just barely fitting under the hood, which limited it’s power output and efficiency. We still don’t know, why Mr. Sikora didn’t choose a V6 or a V8, which would have been a better option. The car was finally unveiled in 1955. 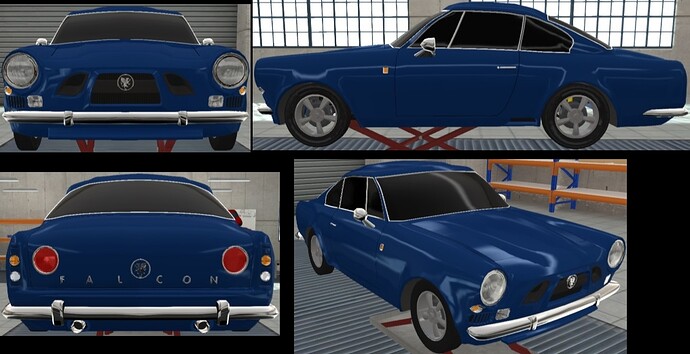 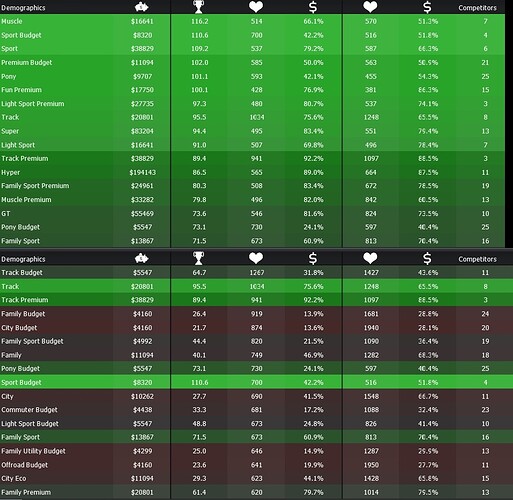 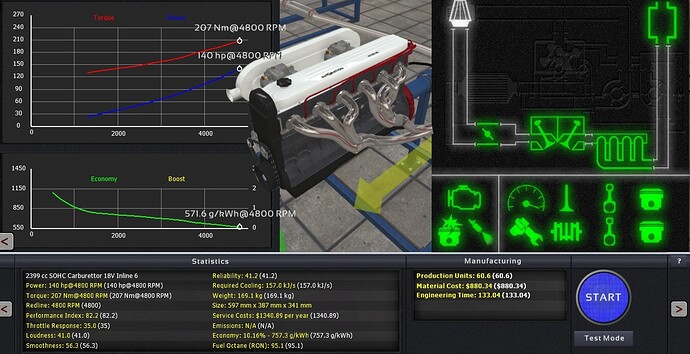 The second generation of the Falcon was put to development in the begining of the 70s. It’s inovative design and new 340hp V8 engine promised a great success. But then the oil crisis of 1973 struck and costs of running a big engined car rose. The car was too forward in development to change the design, so it was decided to wait with it’s release. It was finally unveiled in 1975, coincidentaly almost exactly 20 years after the first generation. The car received very warm welcome and was overally a great success, although the sales were affected by the oil crises of the seventies. The car came in two variations, the Premium and Sport. The main difference was the interier and setting of dampers, the sport one beign obviously the more light, dynamic one with minimal luxury, while the premium one was a competitor to the Ferraris of the time.
(photos of the premium version) 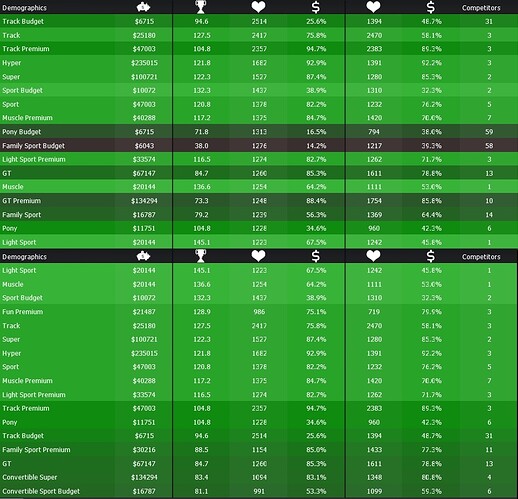 Both the variants were powered by a 4 liter V8 engine, which was built mainly from Aluminium and had 4 valves per cylinder. This, coupled with the direct injection resulted in a power output of 350hp, which for a car only 1000kg heavy was quite much. 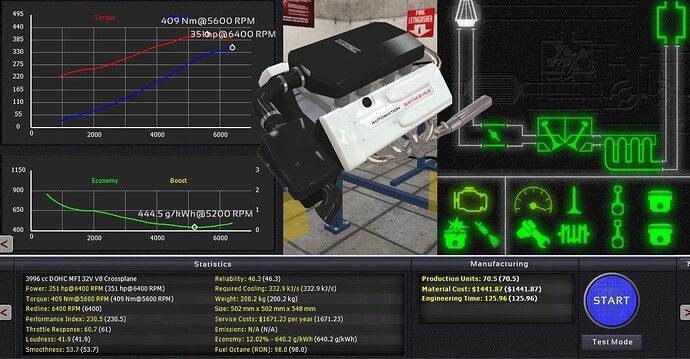 This car was the last prototype made by Ravencraft for the International Endurance Championship. It followed after 3 less successful prototypes, namely the racing version of the Two-Two hypercar and then two newly developed cars, the second one being a smaller with a turbocharged V6 and the third a bigger with a NA V8, which was eventually chosen to represent Ravencraft Racing in the upcoming championship. But during the pre event testing runs, the car was deemed unsatisfactory. The new carbon fibre chassis had a tendency to break after 5 hours and the brakes werent cooled enough. Ravencraft Racing tried tweeking the car, but the chassis problems persisted and the only hope for Ravencraft to be successful was to develop a new car. Thus the R-412 was born. It took all the good stuff from R-411 (the third prototype), mainly the engine and aerodynamics) and improved uppon them massively. The new 677 horsepower naturaly aspirated V8 engine was almost indestructable and with its economy of 12.73L/100km something truly remarkable. There is still a lot of secrets around the car, as the championship hasnt started yet. 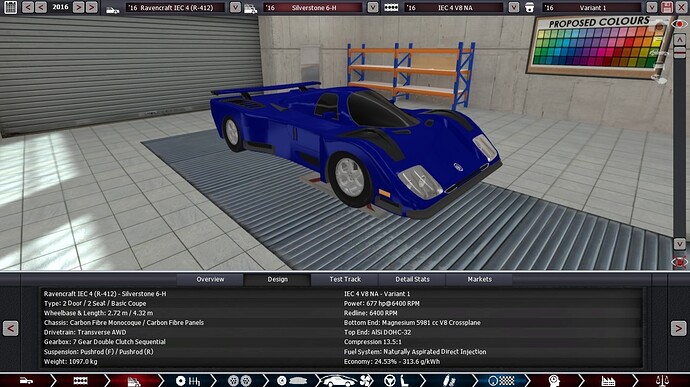 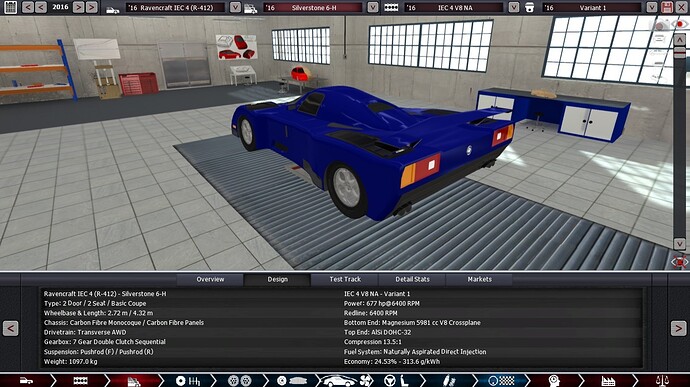 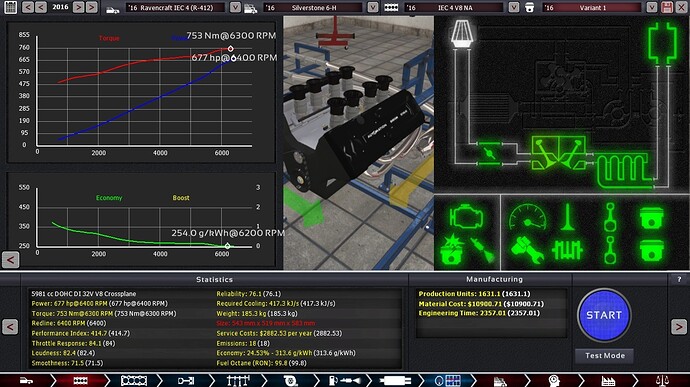 thanks, i think it looks a little bit like the DB 4