I’m attracted by small V8, like 2 motorcycle 4 cylinder in the same block.
Engine capable of very high RPM and epic sound, maybe with the help of a turbocharger. I’ve seen this GT86 with this type of engine, and really hypnotized me. 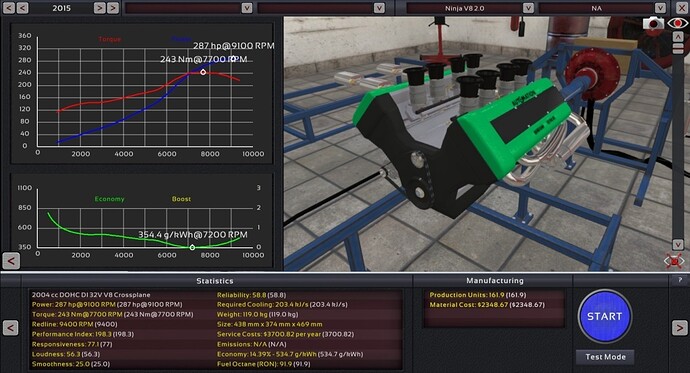 Has someone played with these kind of engines?

PS Forgive me if it’s an old argument, but searching I haven’t found anything about.

This is the maximum amount of horsepower I could get from a 2004cc V8 N/A engine: 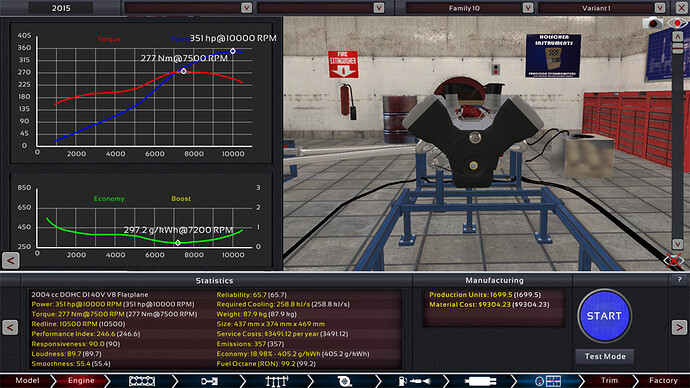 I used +15 on all the quality sliders.

This has a square bore and stroke. I’m still messing around with other configurations, but figured I may as well show what I got right now. 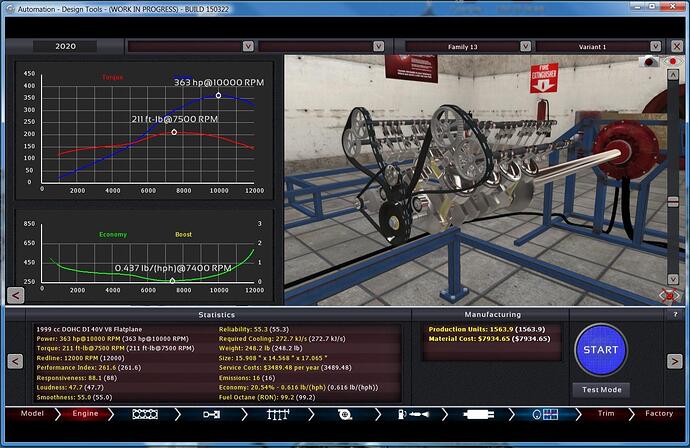 Interesting, the mine one is a short-stroke engine. I’ve to try with a square one.
I use very little quality slider, but I think they help in this case. Even the engine price is 4 times mine.

A question: are these type of engine really good for the speed and acceleration performance of a light car? I didn’t have good result about. Maybe a normal 4cyl turbo gets lot better.

I think if it were a 4cyl, then the short stroke would help get the revs high to get a better peak power. Since this is an 8cyl, the efficiency of cylinder displacement versus cylinder surface area wins out. The need for a short stroke sort of came about by doubling the cylinders. As far as the quality sliders, the fuel system tab and the exhaust tab probably benefits most from the quality sliders. In N/A, the main objective is to get the most efficient burn of fuel. Once that is done, just getting the most amount of air and fuel into your engine and then the most amount of exhaust out of your engine is what determines your power output.
The biggest benefit of an N/A engine is what the game calls responsiveness. Basically, you push the throttle pedal more and you immediately go faster. Turbos have lag and might not even kick in until very high in the RPM band and then you get a big surge of power. This makes the car harder to control and thus less stable. The benefit however is the sheer power a turbo can add. I wouldn’t be surprised if a turbo 2.0L can max out at 700-800 hp in this game.

You are right, but the relationship between bore and stroke is a bit different for the result. I think exactly like you about, but I’ve done a try with a “quad” engine (same bore and stroke), not supercharged.
The result is this (all +15 quality): 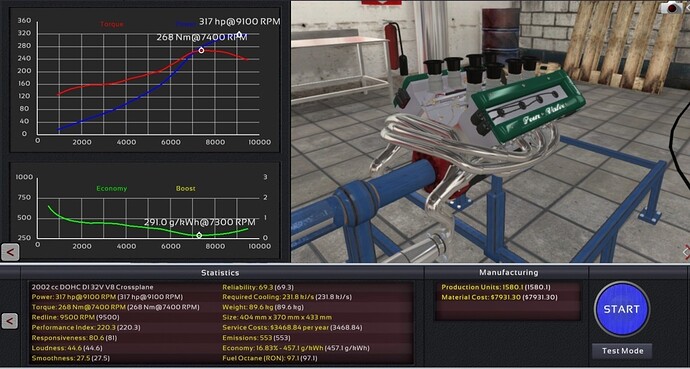 I wasn’t able to reach the 10k rpm, maybe I’ve to try different combination of bore and stroke…

With the same base I’ve tried a supercharged one, with the only focus for max power. It’s a bit terrifying especially the power escalation after the turbo kick-in. 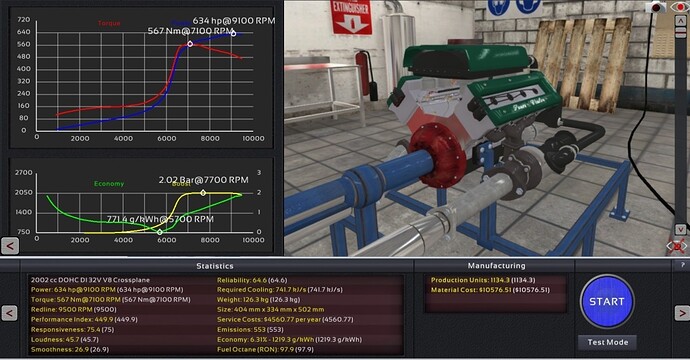 Did somebody say boost?

Found an old project of mine… 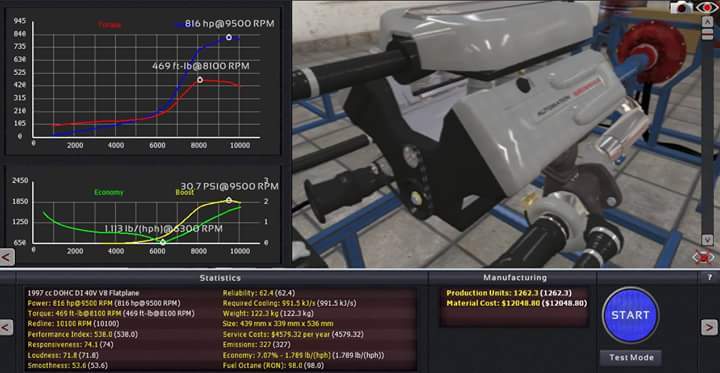 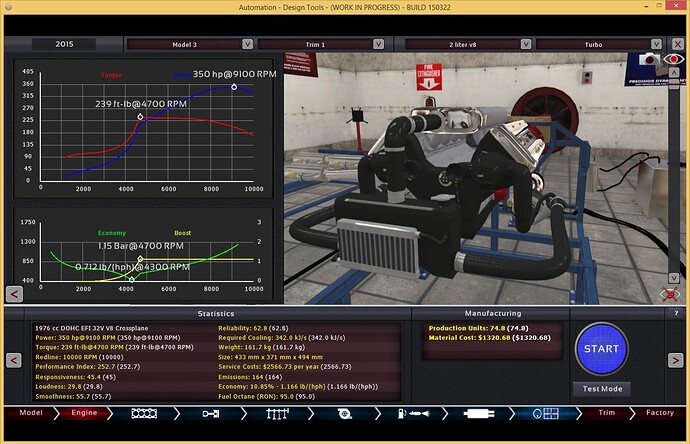 switching to a A2A intercooler can save some money and weight at the cost of some efficiency. 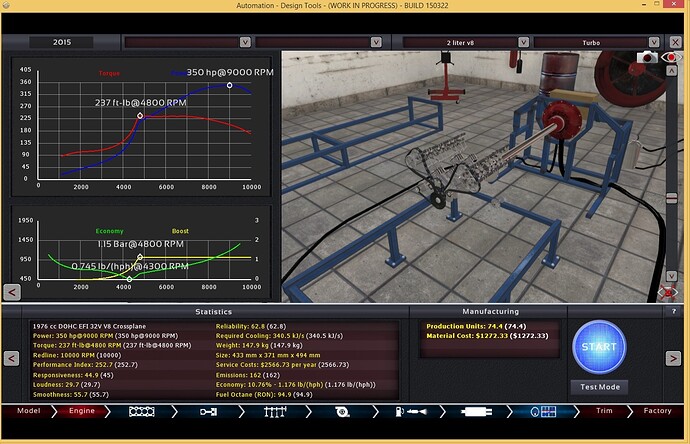 Both are running a double baffled muffler setup with bypass valves, nice and quite below 4000 rpms, loud and shouty from 5000 to redline 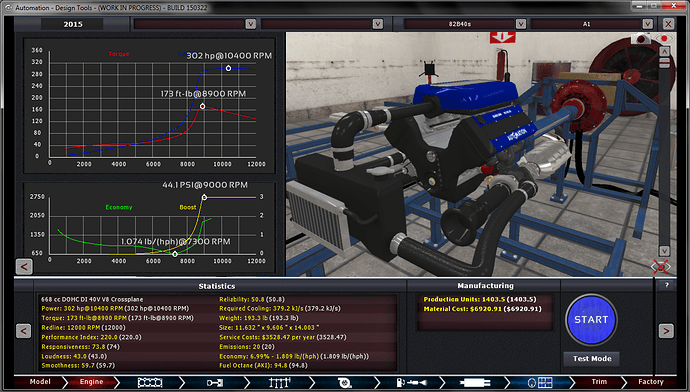 I’d say it is the same recipe as for a Vtech, minimum bore to maximum stroke, extreme cams, high compression ratio, variable valve timing and high performance internals. It revs like hell.

BTW. I completed the Kasachian challenge with a cheap low rev and high torque V8.

The solution to small V8 power is get a bigger V8!!! 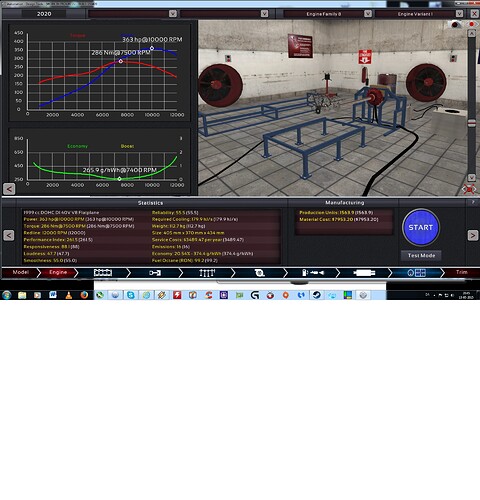 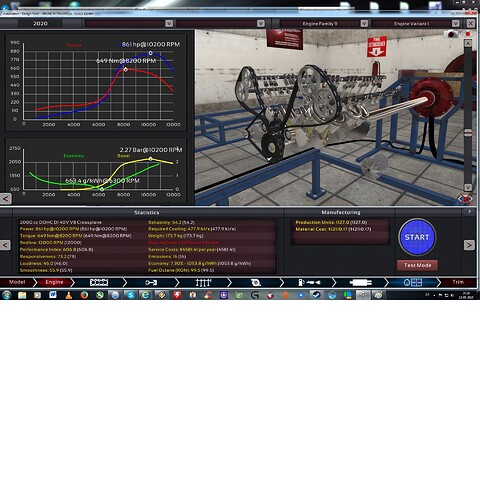 I think, this is the smallest possible V8 you can build with maximum boost on it´s level. 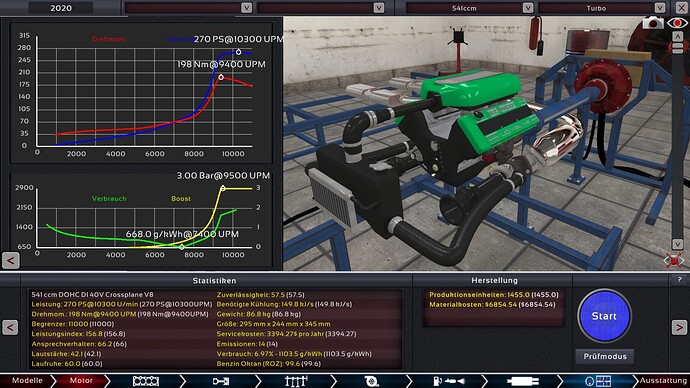