I think the biggest issue with this was making a “livery.”
Automation isn’t the easiest livery maker to be honest. It’s hard to really nail it while also fighting the fixture warping to look just right.
I know this is just a free podium spot, but I just wanted to at least show I made an honest attempt.

Agreed, I think too much importance on a livery when making a good livery is rather difficult isnt a good thing to base your challenge off of, I missed the clunker run for this

I was also curious to see what engineering tricks or backstories the other guys had with their car, so I was hoping for maybe a car review of some sort?

You do realize the first place car had a very good livery, and it was not the first time it has been done right? Making liveries had been around for way more than a year at this point. If people didn’t want to enter, I really don’t mind whatever reason it was rather timing or having other obligations, saying it was too hard is just insulting to the community. Are they easy? No, but they are absolutely nowhere near as hard as you guys make it out to be.

And no I’m not expanding on the reviews. Just from the priorities there was a clear winner

due to an obvious lack of art assets the game development had grinded to a halt and was shelved as a stillborn project, never to see the light of day. Perhaps one day someone will dig around in the internet and find out about project CIRCUIT, and think “what if?”. Would it have actually made out to be a good game, or was there an obvious underlying reason that future game studios could perhaps learn from with its failure. Too much microtransactions perhaps? Or maybe too little? Was it internal conflict, maybe too ambitious, or did they simply run out of money? Regardless of that, one thing is for certain: we can probably blame the publisher for this.

I suspect that budget constraints (2008 was the year the world came close to another Great Depression, after all) would have been the most likely reason for abandoning the project.

OOC: The lack of interest for AGC16 may have been a symptom of many users being too preoccupied with real life and/or other forum challenges during its submission period.

I would have definately entered but i was unfortunately not able to play during that time, so bad timing

AGC17 - Ludicrus Cab : Around the World 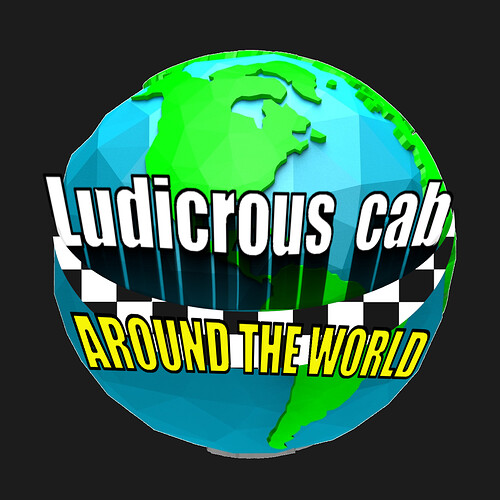 A year year, a perfect time to make more money.
After the success of last years 6000 Rounds per Minute: Rearmed and Apex Racing: Sunrise it is time to milk another old IP from the depths of idea drawers.

The orginal “Ludicrous Cab” was an early 3D Arcade racing game from the early 2000’s. The goal was to get the highscore in ether a limited timeframe or in the endless mode. Points were achived by delivering people from A to B. The quicker one went, the more points you get. Extra points could be achived by driving close by others, drifting, using the hydraulic systems to jump and using certain rails to grind. The location was mainly focused on an condensed version of Detroit, featuring many factories to drive though and such. The 4 cars featured were american barges reaching roughly from the 60-80’s. Every single of them featuring their unique character.

For the Reboot a lot of the game most of these mechanics will be ported into the new version. Giving old fans the know back. Furthermore a story and a smaller upgrade system will be taken place. The biggest new features are the online features and the 6 new locations all with their own cabs. The new locations will be:

Once again, Speedco is asking the communty to help out designing these cars and characters. The winner will even get the Cover photo once more again!

Submission will open 19th May

for the good questions i have received

Q: Can i do something else than a yellow cab?
A: Yes totally, i even highly endorse it, just make sure it fitting for the hometown it is coming from

Q: How heavly will the interior be judged?
A: Considering you will only see it from thrid person, not much. Ofc better interiors gets the bonus points, but you are not required to go full custom gearknob

Q: Hey i want to use my brand is that okay
A: I would prefer non-branded car, if you want you can “GTA-fy” your brand

If I don’t see a single Dale Earnhardt Sr. from Baseketball as a submission here, I’m gonna riot, and be immensely disappointed in this entire community. 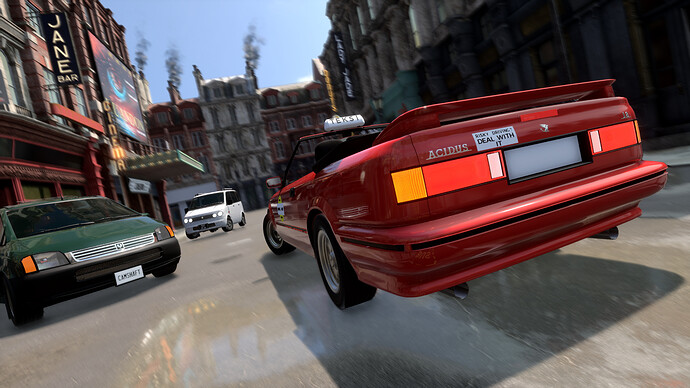 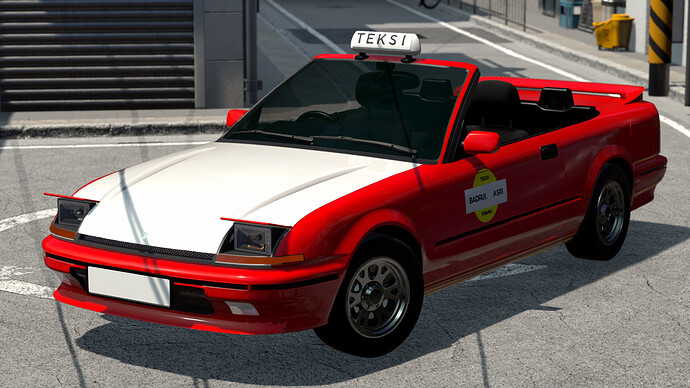 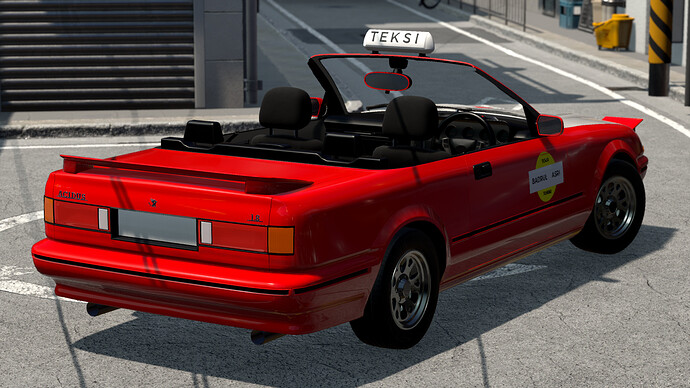 Badrul Asri, your Malaysian driver, is a polite, talkative, and generous person. His father used to operate a profitable taxi cab business in Kuala Lumpur, Malaysia, where he was born and raised. He began driving taxi for his father after obtaining his driver’s licence at the age of 18 years old.

He was comfortable with how to steer a vehicle after playing racing games at a nearby arcade, and he used to drive dangerously on public roads because he felt he was playing a video game. Passengers who travelled with him, on the other hand, never complained about his driving because he often arrived at the destination faster than they anticipated.

With all of the good feedback and a large sum of money, Badrul and his father decided to extend their company to other countries, and what better place to start than Tosuki, a busy and crowded city where people are searching for cabs to get to their destinations.

Badrul will be the taxi driver, with his father managing the accounts and other office tasks. Now it’s up to Badrul to bring in the cash to make his father’s taxi cab company a success in Tosuki.

Boleslav and his 1976 Rama Rena taxi are a great illustration for the saying that, over time, a car and its driver will become ever more similar to one another. Both have been out on the streets of Vardeskik every day for 8 years now sporting the same livery, both have become impervious to the usually frigid conditions, both have the occasional habit of exhaling dark smoke through their pipe, and both even run on the same fuel - 160 proof clear Kula vodka!

Boleslav has taken up the job as taxi driver after being discharged from the White Army. He looks back at these times with pride. This is not only evident by the cap he is wearing, but also that the sole source of entertainment for the passengers in his car are stories from his good old days. He is a good storyteller though, and his shamelessly embellished tales of his colourful past are popular with the few tourists who happen to make their way to Vardeskik. 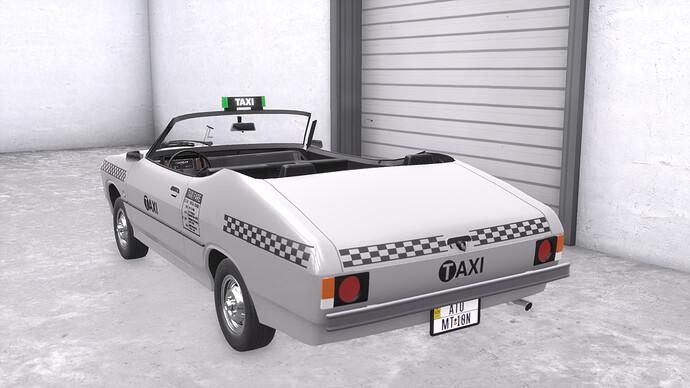 The Rena’s rather low power should give you not too much trouble accelerating on Vardeskik’s slippery road surfaces, but the rudimentary brakes easily make up for it in challenge. Brake too early or too much and you have to spend valuable time to get back up to speed again. But brake too little or too late, and you slide into the oncoming traffic instead of making the corner! The Rena’s RWD means that you can skillfully drift around the corners on the icy streets if you hit just the right speed - but once you are in a spin, you are in for the spin! Therefore, precise and technical driving and conservation of momentum will get you the most points with the Rena.

There are also some additional challenges waiting for you in Vardeskik. The roads are not only icy to varying extents, there are also potholes in some places that force you to avoid certain lanes. Due to the car having a similar colour than the snowy environment, other drivers may not see you and hit your car. Also, if you pick up the wrong passenger, state agents will hunt you in black V8-powered interceptors - but at least they have to deal with the slippery surfaces, too! You can also use your car’s white colour to your advantage and learn the trick to become stealthy for a short time and simply blend in with the environment. Success of this tactic is not guaranteed, however!

Some ideas for in-game sound bites:
(all to be read in a deep voice with a Russian accent, and all end with hearty guttural laughter) 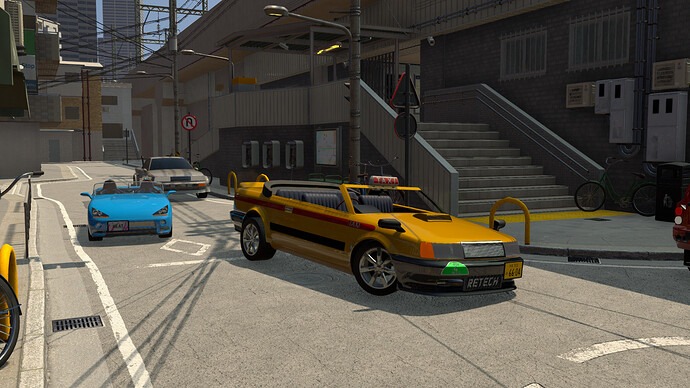 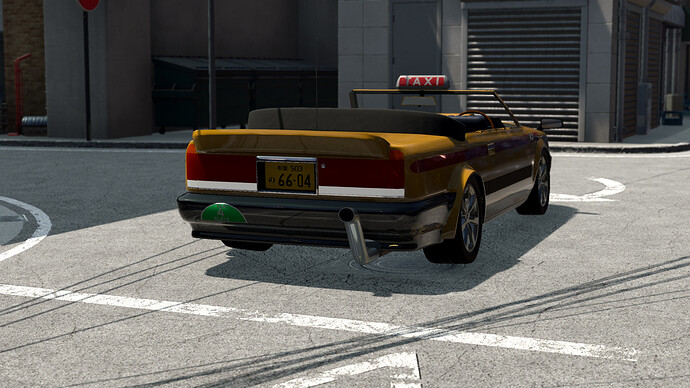 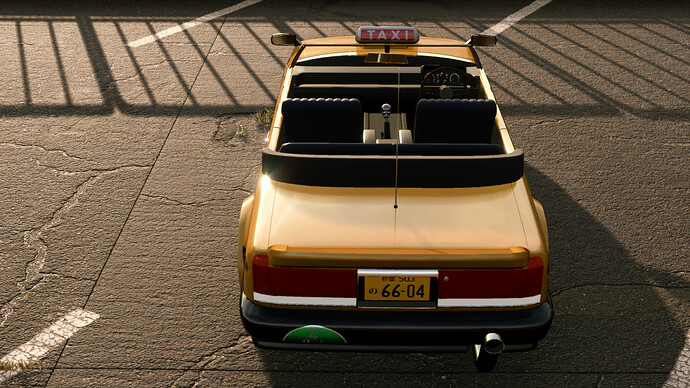 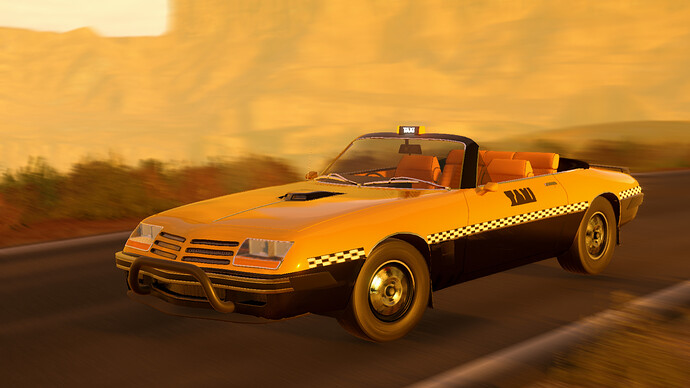 Photo1091920×1080 475 KB
Hailing from a small town near Wild Widths, Jim Sunderland is the man you need to ferry passengers around in a hurry. Featuring an American 360ci V8 putting down 277hp and 349 pound feet of torque, it carries this thunder from down under to a top speed of 155mph. 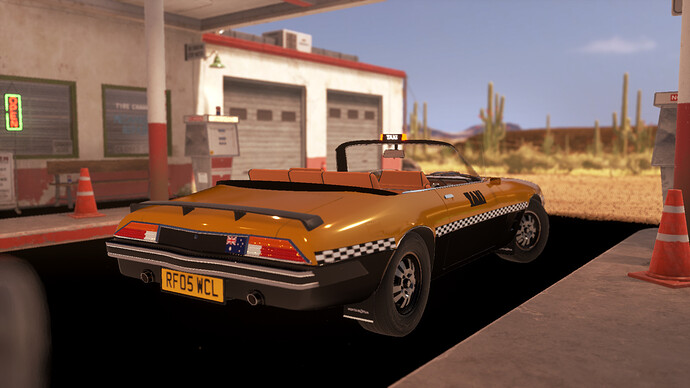 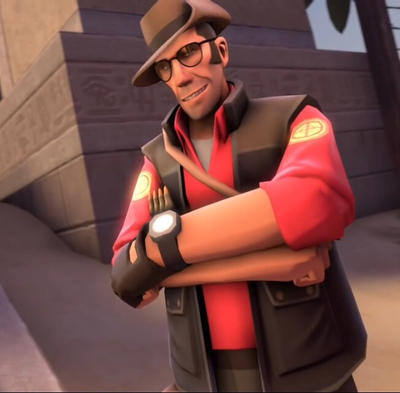 Because more entries are always better:

With a 70% vote, i will extend the deadline for another week. 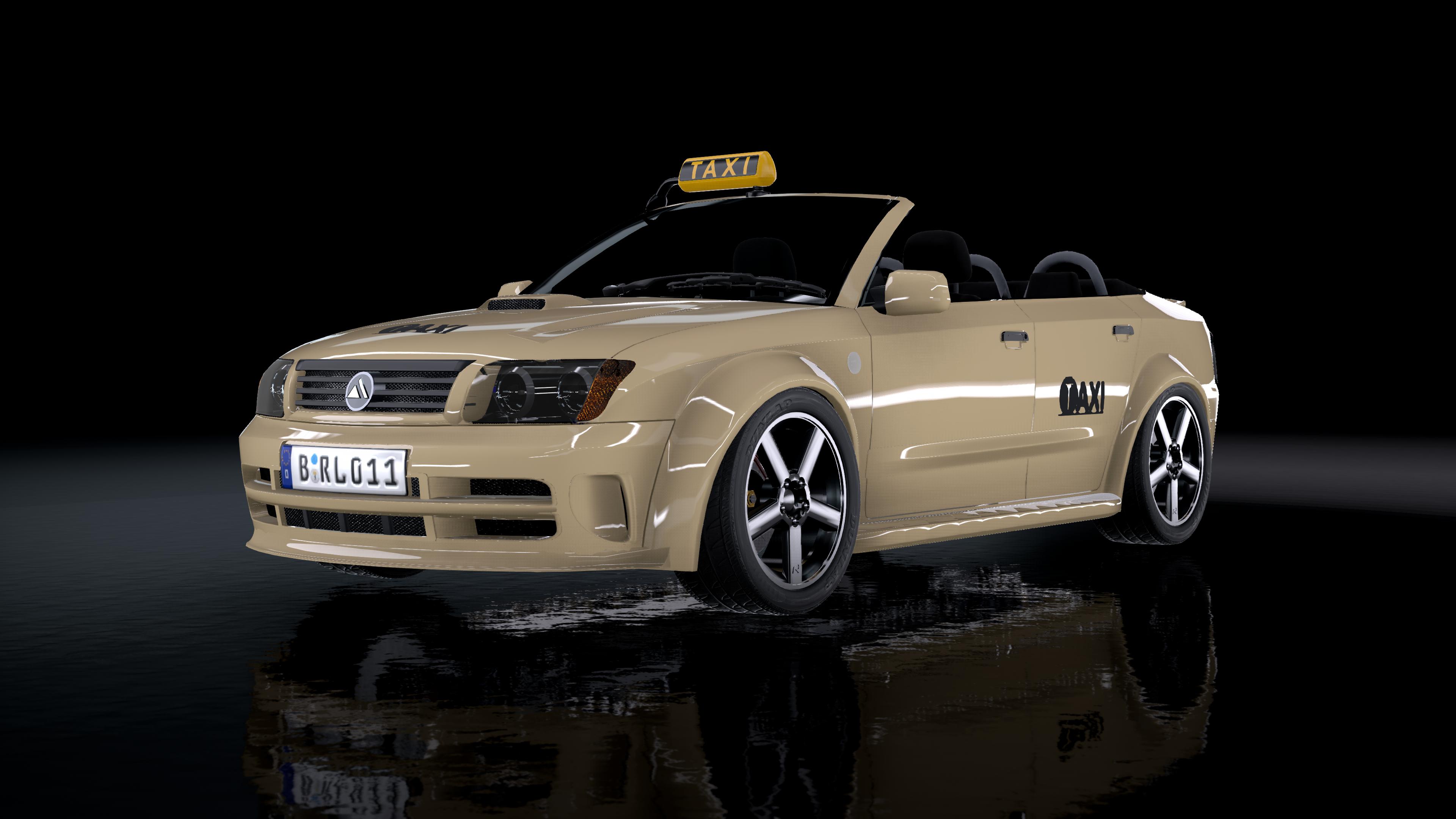 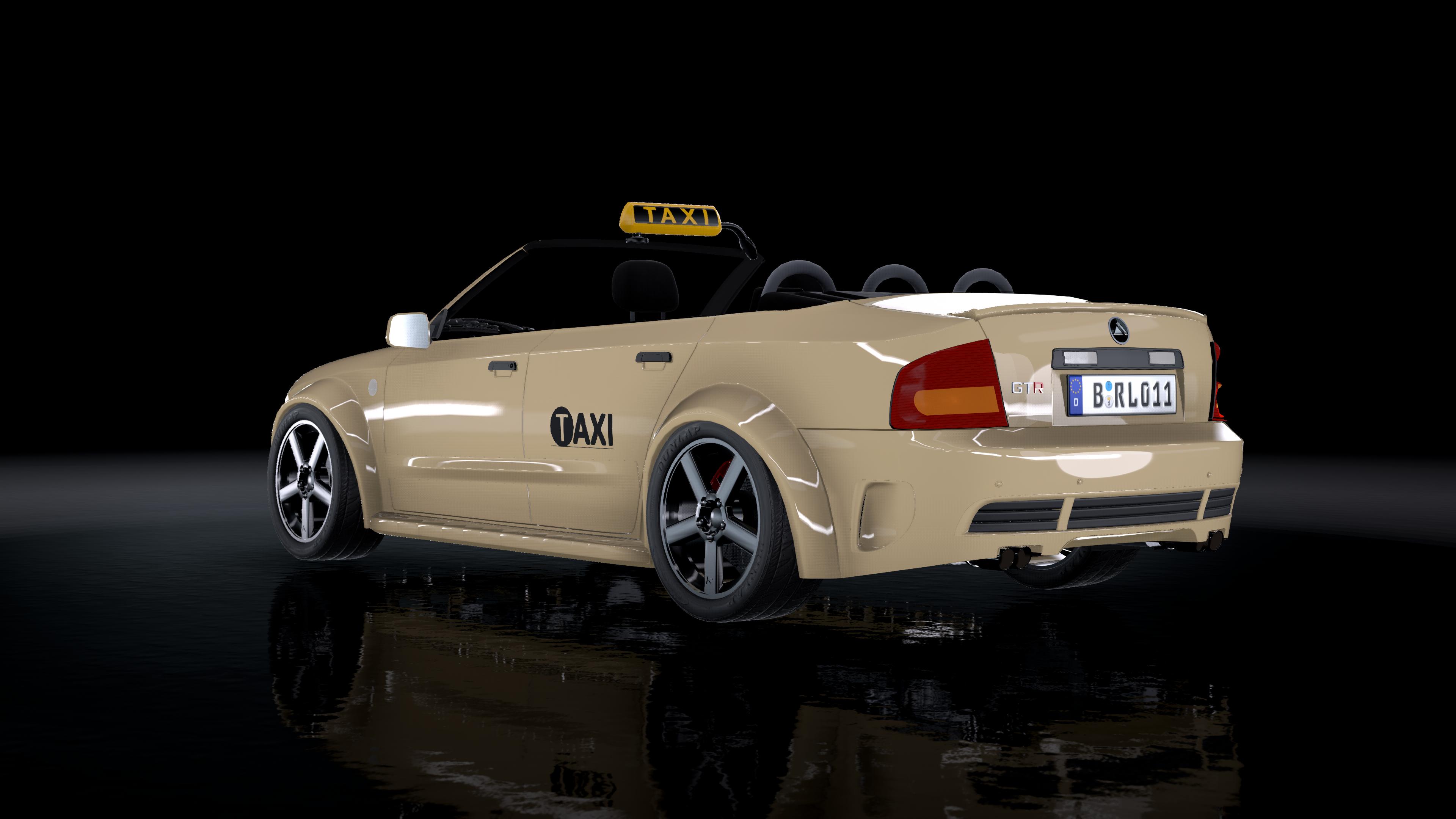 The GkDW shown is the range-topping performance flagship of the 200 compact executive, and it was designed to have great handling thanks to AWD and sports-tuned suspension. The 200 GT-R is fast as well, as its 345 hp 2.9 liter twin turbo V6 can help the car get from zero to 100 comfortably in just 4.8 seconds.

The car was designed to match the taxi colors on the area it serviced, i.e. Weißgipfelhausen.

He is often seen in a black suit with a red belt, sunglasses and a mask to conceal his own true identity. He rarely talks, but sometimes he talks with his London-ish accent, which some people might thought he’s somebody from there. However, up till today, there is no proof were made about his nationality. 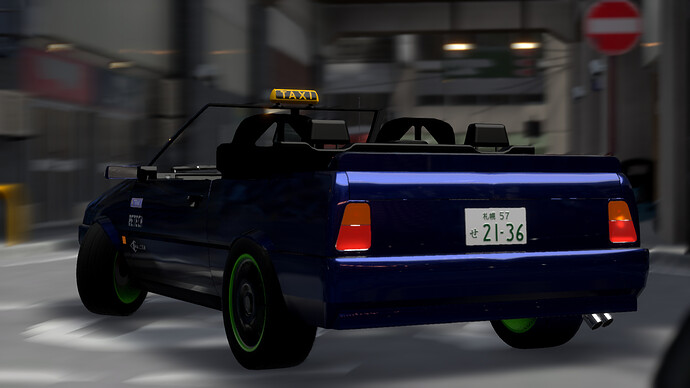 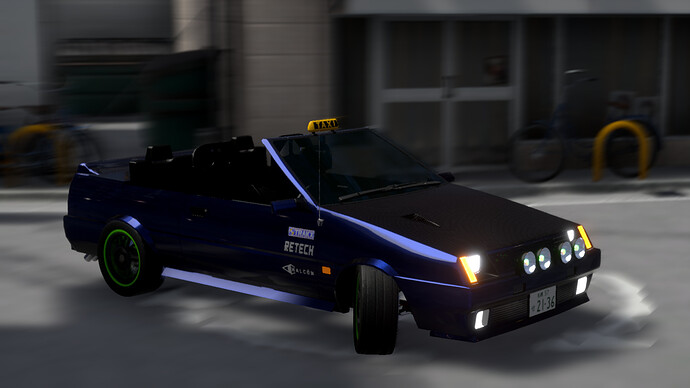 Photo221920×1080 282 KB
My car for AGC17, the 1984 Aikawa Templar 2.3 GT Cabriolet, which is obviously heavily tuned.
Originally starting out in Tosuki as a hardcore street racing rig, its owner Asuna Hiroshi soon modified it a bit to work in her uncle’s cab company and earn a bit of money…
…by re-fitting the rear seats and installing a cheap casette player. It also has very little rear grip, meaning that you can drift it through the narrow streets but it will spin if you steer too hard or too little.
Asuna herself adores this little RWD compact, and she even painted the ends of her hair (which is basically jet-black) the same acid green colour as the rim lips.
345ish HP coming from a 2.3 turbo I4.
BTW don’t shun me for using semi slicks, I wanted a little bit more grip.
(Might just be called the Templar 2.3 GT ingame)
4 Likes
thecarlover 30 May 2021 18:13 #931

Wild Jack and the Kabgaroo 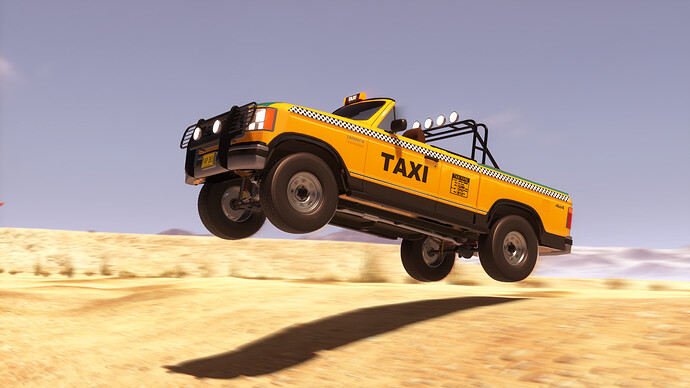 Wild Widths’ craziest cabbie is back it, jumping over any obstacle the Outback throws his way with the Kabgaroo: a 4x4 V8 powered taxi that will haul anyone, anywhere.

Wild Jack pictured here moments before winning a boxing match with a kangaroo: 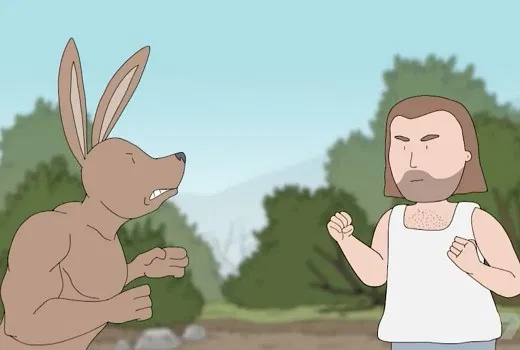 Edit: Figured it’s worth getting into more detail about Wild Jack. He’s effectively the personification of the bogan stereotype and is known to carry a bbq and a cooler full of beer and meat in the back of the cab to enjoy the moment he’s on break. While generally uncouth, he is a nice guy who thinks much of himself and will take on any challenge (such as boxing a kangaroo).

I’d like to thank you and the lot of voters for the extension. I’m working on an essay and had to deal with some court issues, and wasn’t near finished. Thanks!