This seems interesting, the challenge could vary wildly depending on the game the dev chooses. Fingers crossed for GTA VI in 80s Vice City heh

Atleast this isn’t going to crash and burn immediatly. It’s in safe hands for now. Hopefully we can get atleast a few rounds out of this thing with some awesome cover art.

June 6th, 1995 - Things are looking dire at computer game development studio Graviton Games, where most of its staff has been laid off after a string of commercial flops during the past two years. Despite critical acclaim, nobody seems to be buying their games, and it seems unlikely that the studio will survive until the end of the calendar year. Fortunately, lead programmer Ben Wallace, 3D artist Gavin Morris, and executive producer Steve Parkes have remained with the studio, and are about to hatch a plot to save the company with the third installment of their popular racing game, SpeedStorm 3D.

Here’s what Funland looked like back in 1995, for those not old enough to remember what it used to be back then: 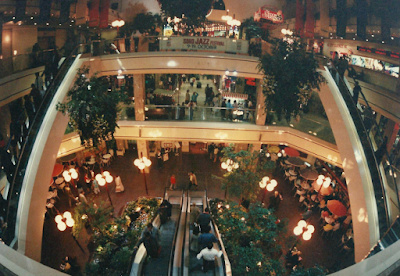 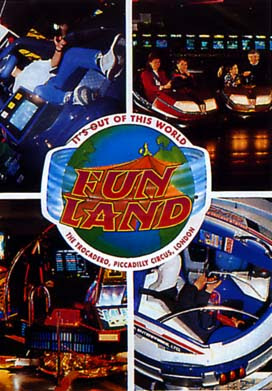 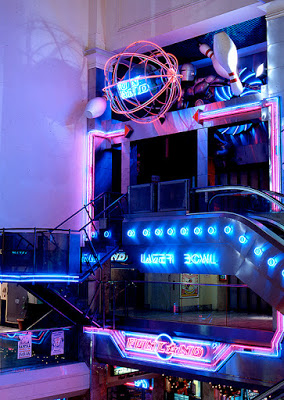 That afternoon, the three men was returning from a quick trip to London, having just spent several hours trying out the arcade games scattered throughout Funland Trocadero at Piccadilly Circus. On the drive back to Graviton HQ in Birmingham, Mr Morris had a brainwave. “So… Those racing games I just played are our inspiration, then?” He thought to himself. “If that’s the case, then SpeedStorm 3D could just be our salvation!”

A few hours later, in the boardroom at Graviton HQ, Ben, Gavin and Steve began their discussion in earnest about what the game would be about:

Ben: All right, boys. SpeedStorm 3D is meant to come out in four months, on PC and home consoles, and it will most likely decide the future of this company - so we must make sure it delivers on all its promises.
Gavin: Spot on - we have a reputation to uphold. The last two games in that series captured the public’s imagination (and sold well to boot) for nailing a simple recipe: fast cars in breathtaking locations set to cool music, combined with an absorbing gameplay experience - one that nobody will ever tire of - and the right control scheme, will always lead to success.
Steve: It’s got me thinking. All those elements were present in those 3D arcade racing games we tried at Funland. Needless to say, this must also apply to SpeedStorm 3D - in other words, it has to be the closest thing you can get to having an actual arcade machine in your living room.
Ben: To that end, it has to feel like an arcade racer - high speeds, crazy jumps, wild drifts, stunning scenery, an ace soundtrack, and - most importantly of all - some cool cars.
Gavin: Speaking of cool cars, this project will never leave the drawing board without them. But I know of a way to get them into our game. I’ll contact their manufacturers for licensing purposes, examine the cars we receive, then decide which ones will be featured in our game.
Steve: Any requirements or restrictions?
Ben: (sighs) OK, here they are:

Cars which meet the following criteria are more likely to be considered for the cover.

Important Note: No resubmissions allowed - so please make sure that your entry meets all requirements before submitting.

I am using the stable release, but you may submit cars from the open beta if you wish; just make sure to state which build you used. At any rate, even though you are designing cars for an arcade racer, you should still be sensible, but they should still at least look realistic; even so, they have to be “cool cars”, as stated in the brief - a mundane daily driver or economy car simply won’t cut it.

Depends, does “Active Sport” have the word “active” in it?

Definitely. My reason for banning them is that there’s too much stuff to go wrong if you fit them - and they add cost and weight.

Let’s see if my supercar posted above is fitting within the rules.
If not, prepare for a Wagner or Renoir.

yikes… That’s a jumble of “restrictions” and half would be useless in a video game
Like, who cares what chassis it is if its an arcade game, and why does chassis and panel type specifically exclude plain steel?
Could you make the banned bodies a bit clearer by just circling them with paint or something?
Why mandate a 3 way converter if you already have a max trim rule?

(yes I get that performance figures are important to a game, but refer to the italicized text to get why they seem like a slap in the face right now)

also to nitpick: brake fade 1% or less? clarify: is that the towing brake fade, the sportiness brake fade, etc.?

Usually around this time, a majority of cars were of 5 speed variants with certain few being 6 speed. The classic Cruisin’ Arcade Games were 4 speed.
Don’t get me wrong I love the 6 speed, and my real life DD is a 6 speed, but I like to be as close to commonly accurate of the time as possible.

Could you make the banned bodies a bit clearer by just circling them with paint or something?

Just to clarify on that, here they are: 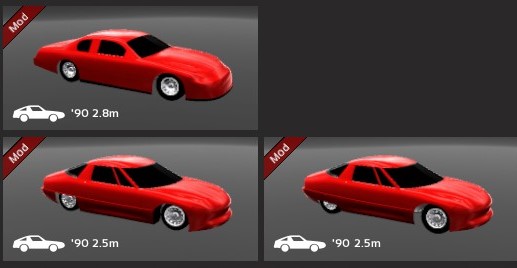 As stated previously, the use of these specific bodies will not be allowed for this round because they are too aerodynamically efficient and can therefore reach unnaturally high speeds. The 90s stock car body has a drag coefficient of 0.1, and that of the EV1 mod body is 0.125. The Diablo mod body, on the other hand, has a drag coefficient of just 0.2, which is higher, but still not high enough.

With that in mind, I will relax the targets slightly so that they will be considered mere recommendations rather than strict requirements. Thus, cars which meet the recommendations will now stand a better chance of being chosen as a cover car at the end of this round.

Given that I don’t have a key, I unfortunately have no choice but to say no to V16s.

I was referring to sportiness brake fade. The OP has been updated accordingly.

Usually around this time, a majority of cars were of 5 speed variants with certain few being 6 speed.

Good point. I have revised the OP to state that 5-speed and 6-speed manual transmissions may be used.

And submissions are now open.

Please take your time to re-read the OP - the rules and regulations have been finalized and will not be changed.

actually you can use V16’s when someone gives it to you, you just cant edit it. So I think unless they changed that You should be able to.

What criteria will vehicles be judged by?

As stated in the OP, the devs are judging on three criteria: design (what the car’s exterior looks like), performance (how fast it is and how well it handles), and relevance (whether or not it belongs in the game).

@abg7 Is the vanilla Diablo body ok to be used? Or is that the same situation as the mod version? 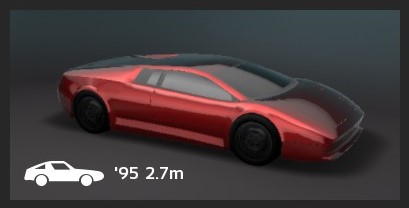 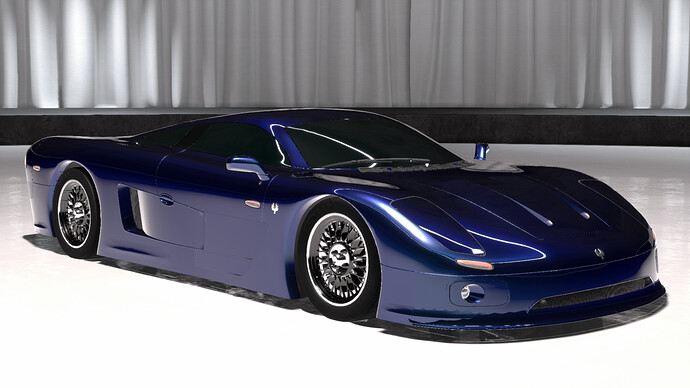 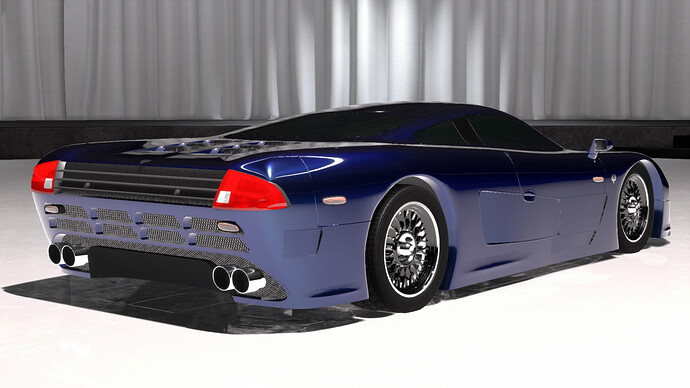 A mid-90s super-GT car designed by Lavelle Studios. Originally penned to be a replacement for the BMMA Flyingfish, a B-Segment RR Coupe, the final design was considered to be far too exotic and audacious for the premium manufacturer. Thus, the final blueprints were turned into a sports car concept. This car came with a stretched wheelbase, 5-speed manual, convertible top, and 4.5 Liter 382 HP V8 engine sitting atop the rear wheels. 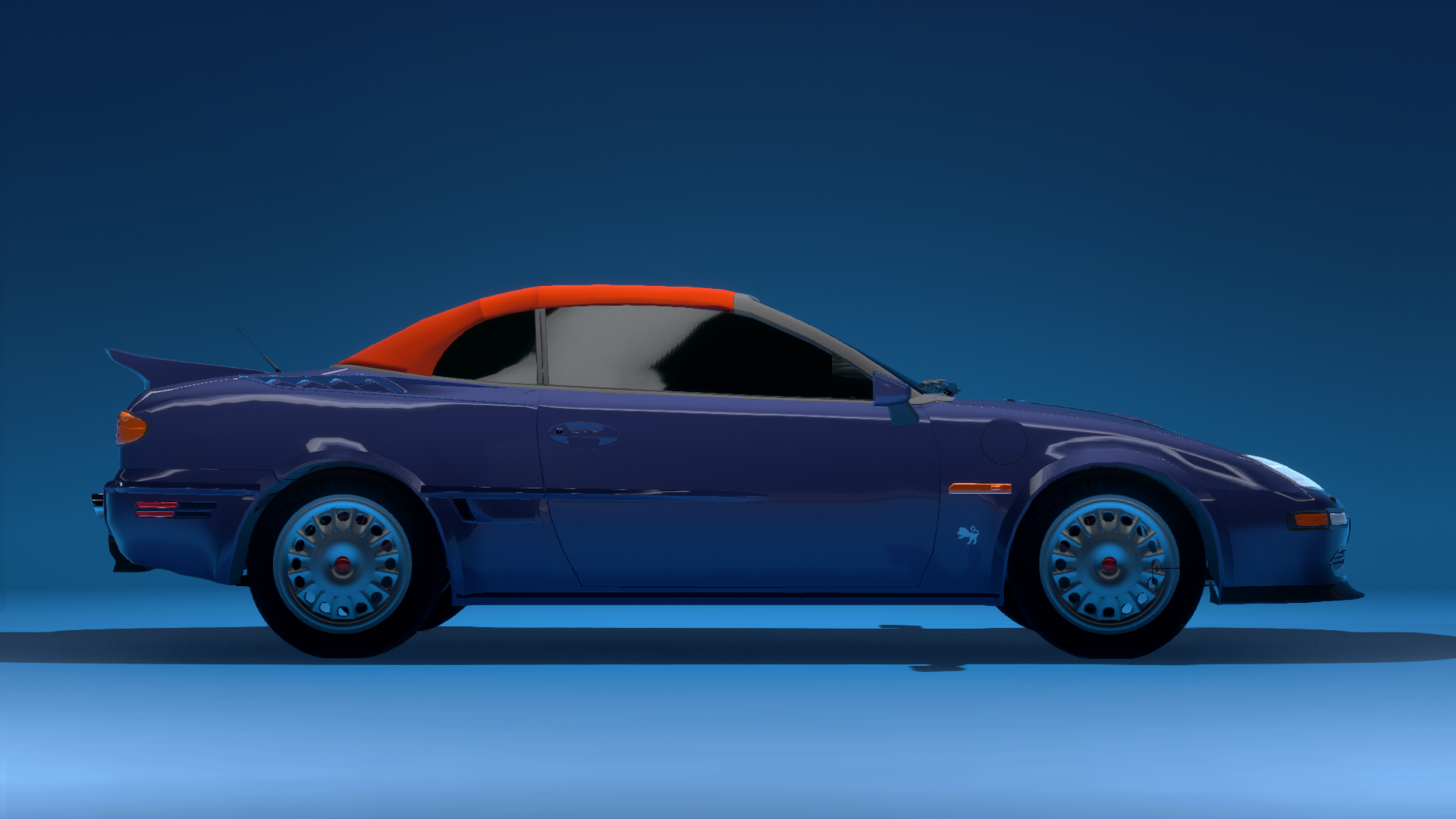 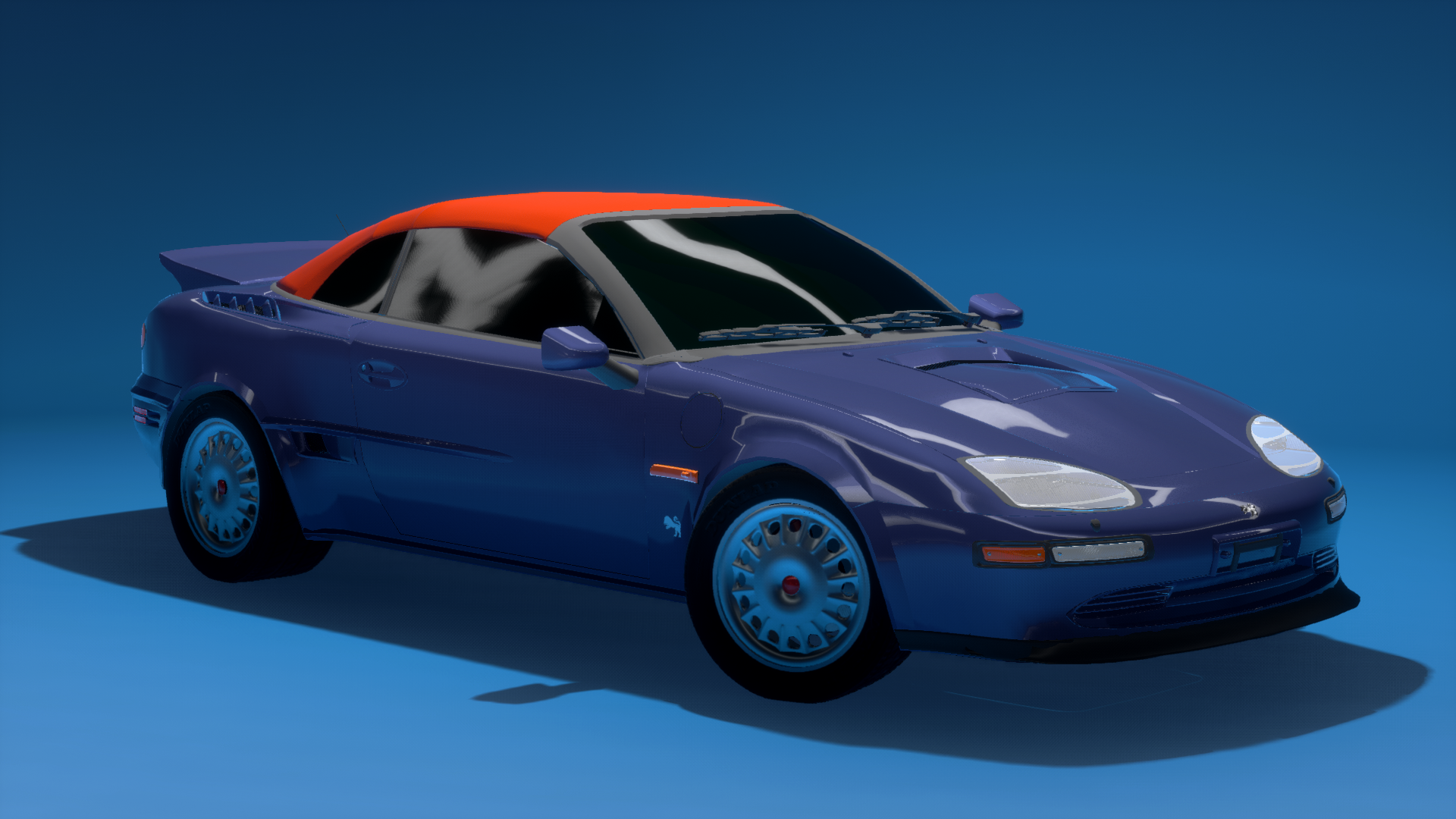 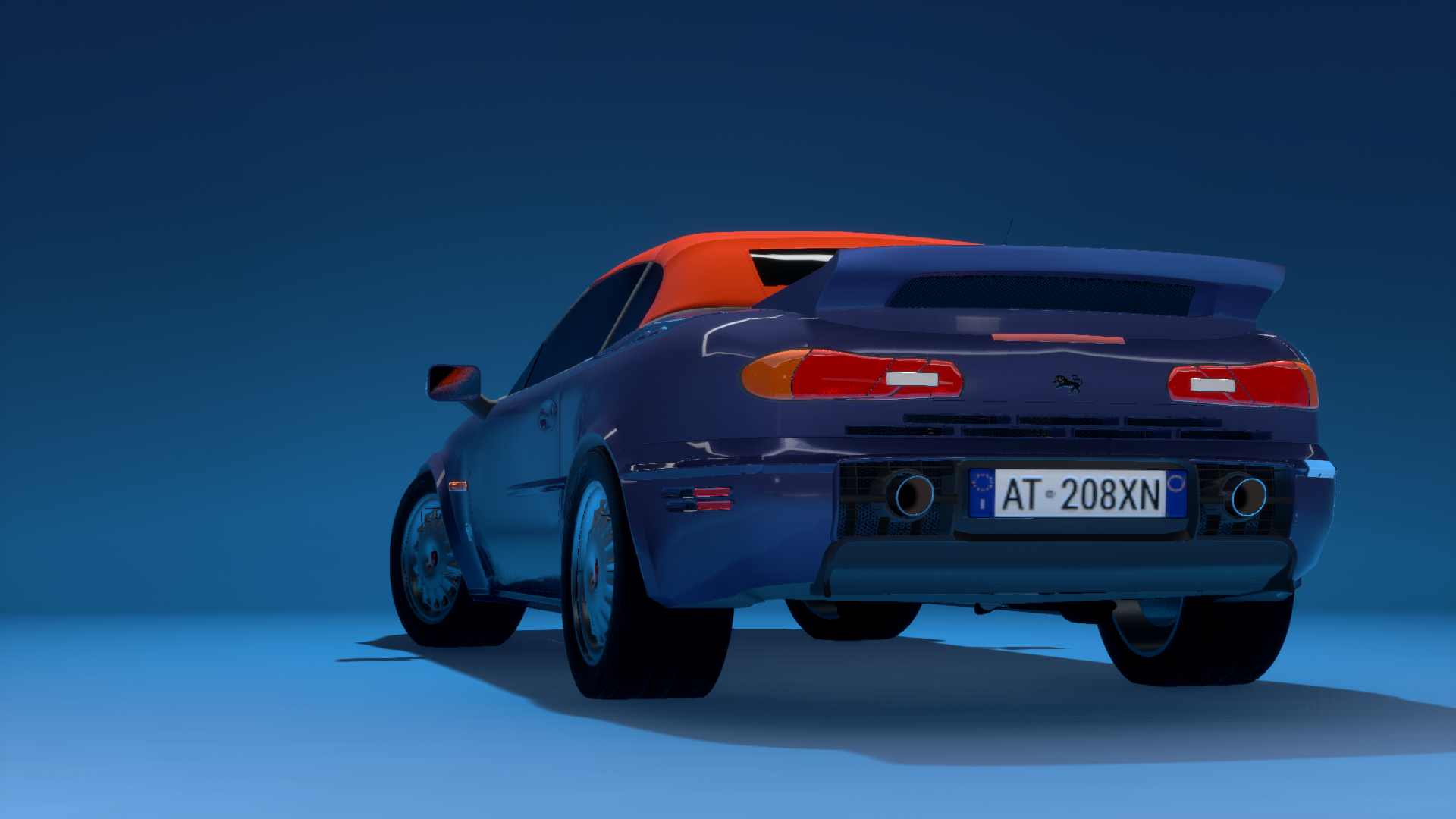 Same question here, I used the non-mod Diablo and my car would go under the regulations.

Thinking about joining in. I already have this, a mid-90s Turból Cutela, a 4 seat fastback coupe aimed at competing with the likes of the Toyota Supra or 911 Carrera. It will need to be modified for this competition, since it is currently AWD, and with 276 hp and 245 wide tires in it’s current guise, it’s going to be way off the pace of the mid-engined hypercars that will surely be entered.

I’m probably better off just making a hypercar from scratch. But it sure is pretty. 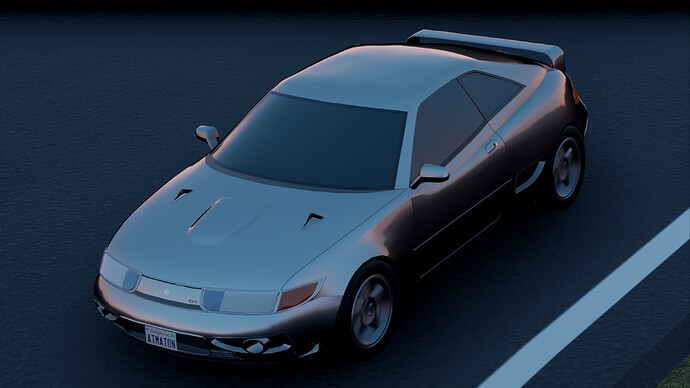 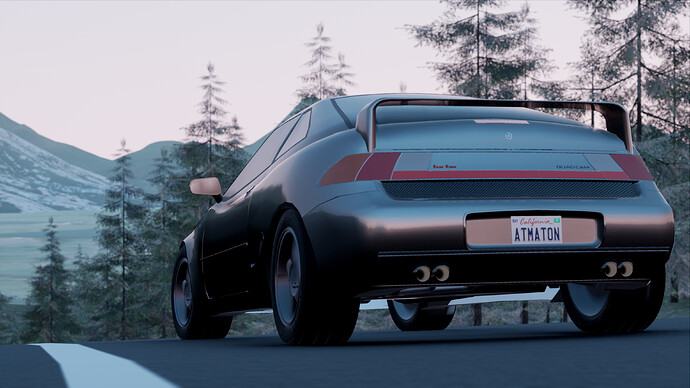 So is there any reason not to make something that’s just a ridiculous super car?