My childhood basically consisted of just playing UG2 for hours on end, and watching F&F 1 and 2 on repeat on VHS, and this challenge was very much to my liking 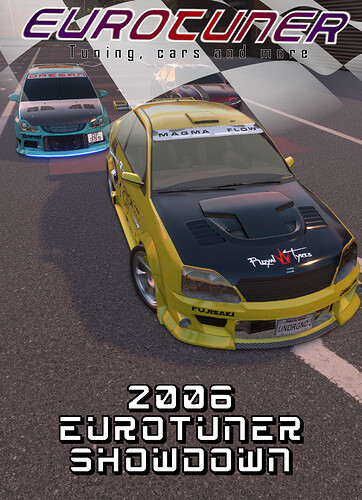 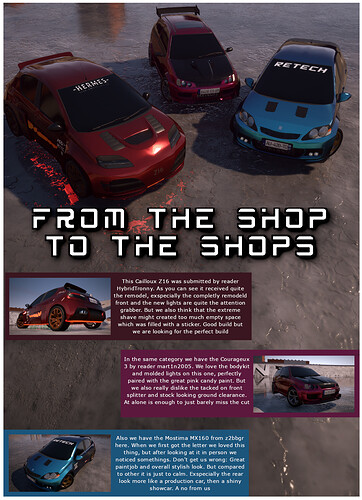 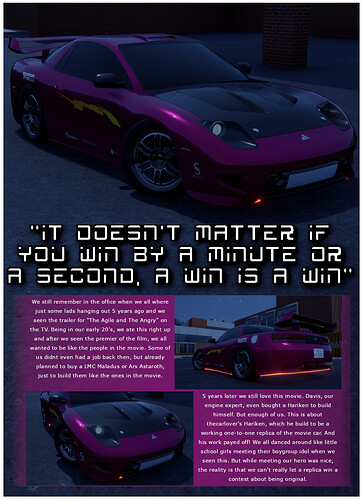 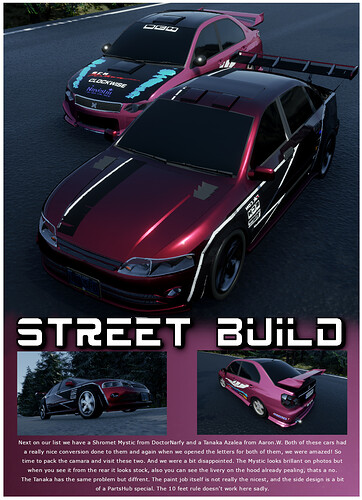 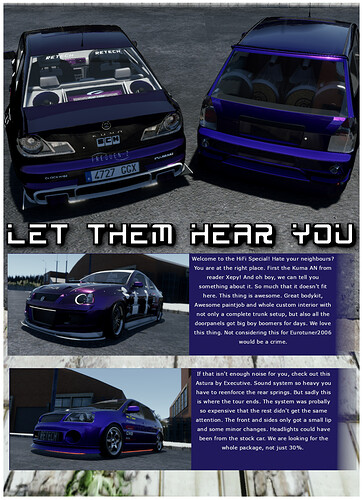 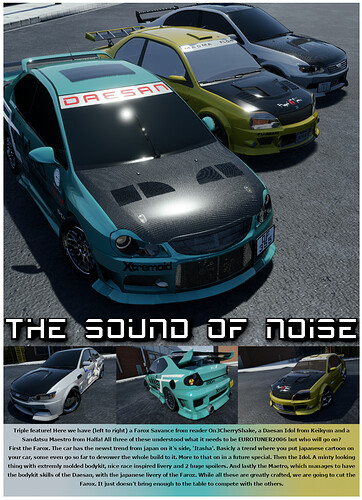 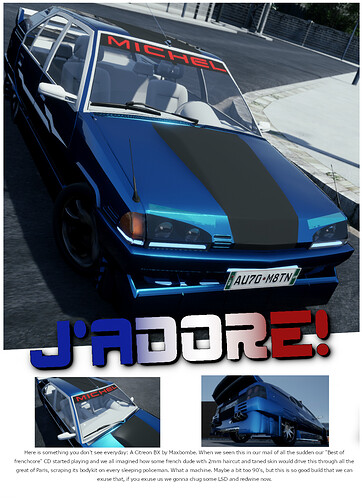 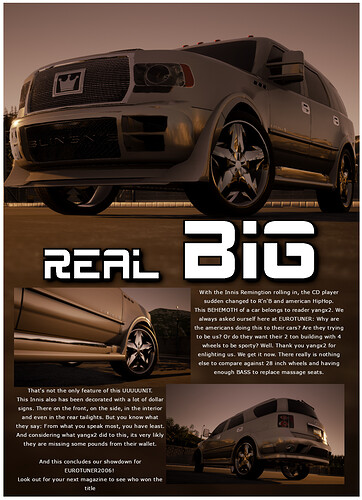 Well done to Xepy for winning this round - he deserved it! Especially since he took the winning entry from CSR 125 and made it win yet another contest. By the way, is that Kuma AN FWD, RWD or AWD? I’m guessing it’s the former.

Thanks for the challenge, was fun revisiting the past!

I’ll have something up soon.

For half a century, Tristella has been building itself as a high-end, premium sports car marque. From luxurious grand tourers, to ferocious super cars, to race winning race cars, there has been a clear direction where the brand has been going. But recently, the numbers… they’ve been leading to a different direction. And it is clear, no matter how pure the brand would like to stay, eventually, you got to build something to bring in more of that sweet cash in.

Question really is however, what will be that future…

The big wigs over at Tristella’s headquarters put their heads together, and soon had hatched up some ideas. Some good, some bad, some requiring a lot of wine to wash down and some with a lot of yelling and rude gestures. But eventually, they cut it down to two routes to go down. However, both of which will require partnership with another company:

The short term moneymaker: a SUV. Shareholders will be happy with this choice, plus they could retune their upcoming engines for it.

The long term gamble: an electric car. Starting now could get them the jump on train early, even if it is rather niche right now.

So what will it be? The calls have been made, now to see what the future holds…

In general, Tristella has some specific design elements (especially for this era) you should include in your design”

Since i’m probably not going to participate due to my big dumb, I’m just going to drop this:
For the Electric, A good name could be Gufo (Or Gufetto), Which is Owl (and lil’ owl) In Italian, Referencing the fact that Owls can fly very Silently.

For SUVs, can we use 5 door instead?

Does it have to have 4 doors, or can we… draw on extra ones. if I were to make something like the Koenigsegg Gemera. ('d split it into two doors rather than one long one)

Can you clarify that it’s SUV or Electric? or SUV and Electric?

You can draw on extra doors as long as the body has 2 rows. I’m only judging design, not mechanicals. I’ll clarify that on the post.

To put it in a way I think that could be understood easily, I want either an Urus or a Mission-E/ Taycan. You can combine if you want, just state what you are making somewhere.

Yeah you can use 5 door for SUV.

2019 Lagopus XS Concept by GMD
" an eco-friendly generic Electric SUV with a tinge of Tristella Brand styling, made purely for raking money, not to impress petrol-heads " 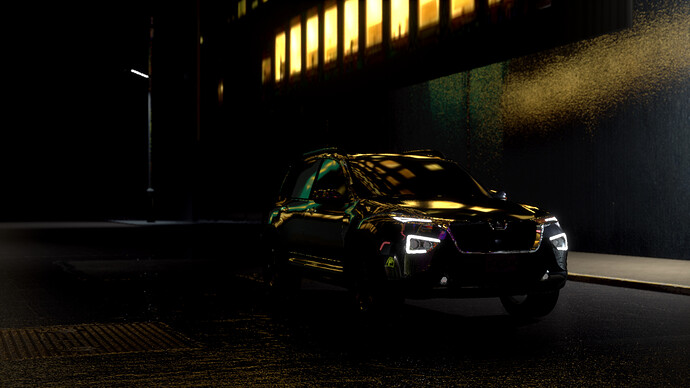 planned to be available in the usual colours of Black, Silver, Silver, and Black

the car is named after a buzzard bird, since its reminding me of buzzard attack heli from GTA:Online, not that wow strikingly good looking but get the job done just fine 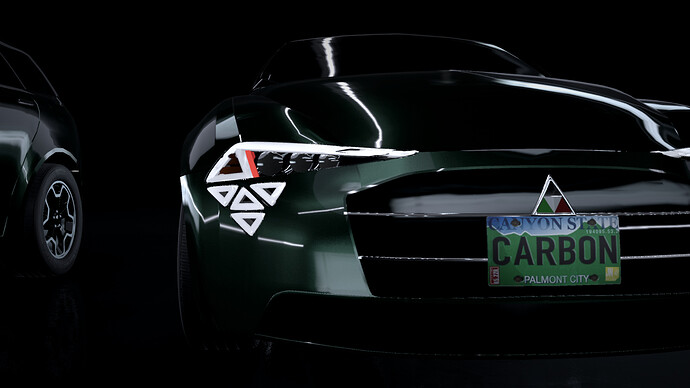 NOTE: There’s an exhaust tip that slipped past me, I used it so the exhaust wouldn’t peek by the Diffuser, but i forgot to remove it. Please ignore it.

Can we make electric SUVs?

Unless by sound you mean volume, then no, electric sedans aren’t loud usually.

To put it in a way I think that could be understood easily, I want either an Urus or a Mission-E/ Taycan. You can combine if you want, just state what you are making somewhere.

Oops
This means an i3/ID3/Model 3, would be way off the mark?

Lamborghini i3… No, that doesn’t exactly sound right, lol

Yeah that’s way below the price range for the brand. A bit late but just so everyone knows the cheapest model in Tristella’s lineup at this time is about 80-90k in Automation bucks. 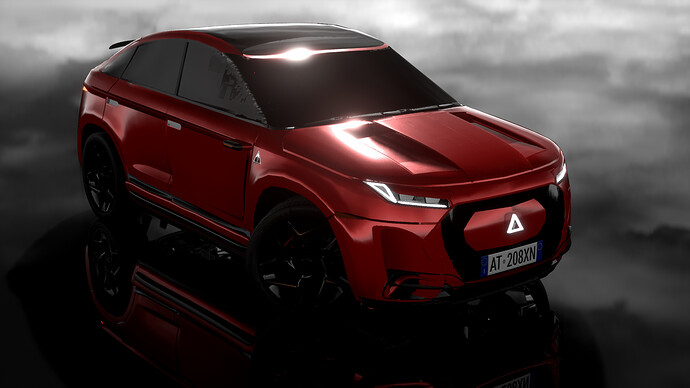 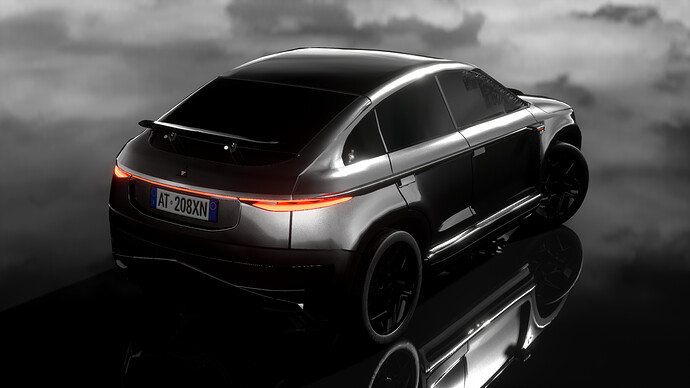