Hello everyone, first off, I’d like to say that Automation and Beamng are the best car games IMO and some of the best videogames that I have ever played in my over 20 years of gaming.

This company is: The Folks’ Wagon, or simplified as Folkswagon.

History of the company:

The origins of the company date all the way back to the year 777 AD in Viking Age Scandinavia. My fictional ancestor, Kevin Hukkinen was a wagon and boat builder. Years and years later, some of his descendants moved to England during the Viking raids; and then, centuries later, the spelling of the name was anglicized as ‘Huckins’. The family continued to build wagons in England until 1885.

The company added a division in 1607 in Maine in the Virginia Colony in British America by Kevin Huckins II; my fictional ancestor of the original founder of the company, Kevin Hukkinen from 777 AD Scandinavia. Kevin II was an Englishman who moved to the New World to start a new business venture. His family had already been wagon builders in England ever since their Viking ancestors moved there and started building wagons to make a living. His father owned the English company, Kevin wanted to start his own division in America. The company continued to build wagons until 1885.

During the California gold rush, his ancestor Kevin Huckins III moved the company to San Francisco and built trains and train cars for the railroad companies, while wagon production still took place in Maine. He had made a massive fortune in gold and eventually passed the company down to his son, Kevin Huckins IV in 1885.

When news reached the American west that Karl Benz had invented the automobile in Germany, Huckins got an idea to start a new industry. He wrote a letter to Karl Benz congratulating him on his invention and asking him if he’d be interested in a joint business venture. Later, the two met in Germany with other entrepreneurs and investors from USA and Germany. The two men could not agree on business terms, and so Huckins instead founded a new company in 1885 in Germany named: The Folks’ Wagon. His inspiration for the name came from his Wild West roots, and he wanted a name that would appeal to Americans living in the frontier; whom he hoped would trade their horse-drawn wagons for automobiles. The reason Huckins founded the new company in Germany is because he wanted to take advantage of the new technology they had invented; and because they actually knew how to design, engineer and build the cars in the first place.

At first a factory was built in Germany to get the company off the ground. They used wagons to start with, and then modified them by adding styling and an engine. They were as mass produced as possible and sold well. In 1890, Huckins built a new factory and taught his American workers how to build cars in the San Francisco Bay Area, California, and he moved about half the production there. Basically, the American market cars were made in San Francisco, and the European market ones in Germany. This remained the same until 1941. This era 1885-1941, is known as the classical era of Folkswagon. The company became a huge success and became one of the biggest automakers during the art deco era.

However, as the political landscape of Germany had changed drastically in 1933, Folkswagon had an uncertain future. The German government had planned to seize the German division of the American company, but they knew that they’d risk serious issues with the United States, potentially even war. Therefore they waited until the first successes of the opening of WWII in 1941 and then they made their move and seized the company in Germany. They hastily re-tooled the factory and used it to produce vehicles for the war; such as: airplanes, trucks, tanks, boats and of course, cars. Meanwhile in USA, the company continued to be successful and built vehicles for the American war effort. This led to an interesting scenario where both the axis and allies were using Folkswagon vehicles. It was not uncommon for a Folkswagon plane or tank to be in a battle against each other from both sides during WWII!

After the war, Folkswagon reclaimed their ownership of the German division of the company, and built a new factory in Stuttgart, West Germany. They became successful again after the war. We are to this day a private company with one owner, me. There is no one else who runs the company except me, and the company does not have stocks. The Folks’ Wagon company headquarters is located in the San Francisco Bay Area, California, (my house).

In my imagination, my father would’ve owned this company until passing it down to me in 2010. So I am the current owner. Folkswagon makes all types of cars.

The company’s logo is a W in a circle surrounded by a spinning letter ‘F’. The reason being that it represents, in chronological order: A Viking stave rune, an old-style logo, a spinning car fan, an aircraft propeller and the initials of the company with rotational symmetry.These are all very important symbols which represent the very unique history of the company. The brand uses designs and styling cues that are classic and timeless in the world of cars; and the company intentionally keeps its designs and styling old school to show their historic roots. However, starting in the 1930s, Folkswagons were already remarkably modern and even futuristic. However the company has kept its timeless designs even through today. In fact, the earliest Folkswagon that I can represent in the game, was produced from the 1930s until 1999!

All of the cars are made in USA and Germany and are available to purchase all over the world.

One of my first cars so far: 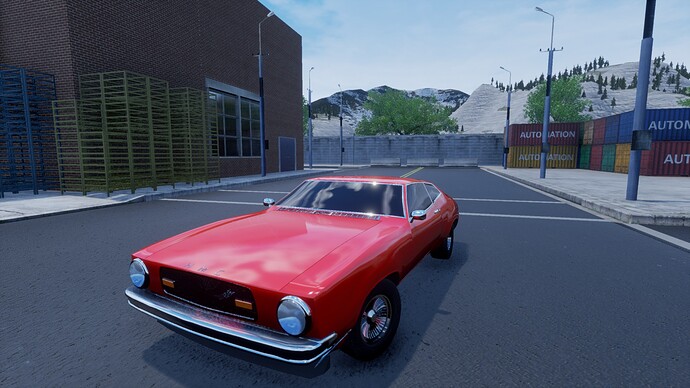 I really love designing cars in this game and driving them in Beam; it’s a lot of fun. The most fun I’ve had on a videogame in a long time.

I can only post one photo at a time for now since I’m new.

Oh well, which HMC is it?.. Does anyone keep track of that?..

A little advice - please don’t use that generic “XMC (X Motors Company)” name scheme with the abbreviation used as the brand name. It instantly makes the company about 1742% more forgettable and a bit less realistic - in the end you don’t see many DAGs, VCCs, TMCs, HMCs and FMCs on the roads, but rather Mercedes-Benz, Volvo, Toyota, Honda or Ford cars. The only examples of companies using the abbreviation as a brand name are those that don’t have any own name in that abbreviation. Fiat - Fabbrica Italiana Automobili Torino (Italian car factory of Turin), BMW - Bayerische Motoren Werke (Bavarian motor works), SAAB - Svenska Automobile Aktie Bolaget (Swedish cars Ltd.) and so on.

In short - I’d strongly advise to use just “Huckins” as the brand name. Rant over.

The name is inspired by the real life GMC and AMC. I have had this fictional company for almost a decade since I used to design cars on Google SketchUp.

I personally love the name.

I created HMC almost a decade ago back when I was designing cars and trucks on Google SketchUp. I used to always dream of being able to drive them like a videogame, and now we have two games (Automation and BeamNG) that make my imaginary car company fantasies possible!

The story of this company is that it is somewhat similar to GMC (General Motors Company), and AMC (American Motors Corporation). It is sort of like a general purpose automotive company that makes a wide range of vehicles, mainly American style.

Here is the logo:

Oh well, which HMC is it?.. Does anyone keep track of that?..

Very good question! We now have:

Nope, SAAB means “Svenska Aeroplan AktieBolaget”, because they started out as an aircraft manufacturer in 1937, over 10 years before they started building cars. The aircraft division still exists too, making the JAS 39 Gripen used by the Swedish airforce, the automobile division was sold to General Motors in the 90s and is now defunct (not 100% true but I don’t care much for NEVS at all).

Well, I know their history very well, but even as a Saab fan I was never sure about the car division’s name extension (is it the right word?), especially since the Wikipedia lists what I wrote above for that division. I guess they just use(d) “SAAB” officially, and then Svenska Aeroplan… or Svenska Automobile… whenever suitable. 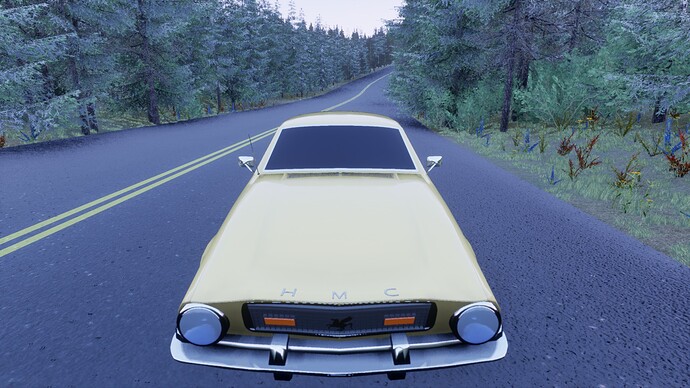 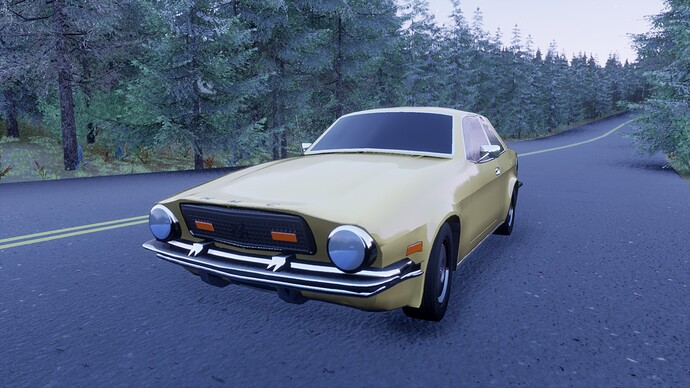 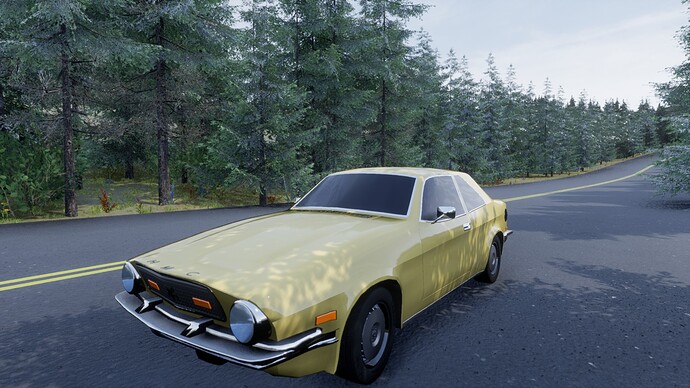 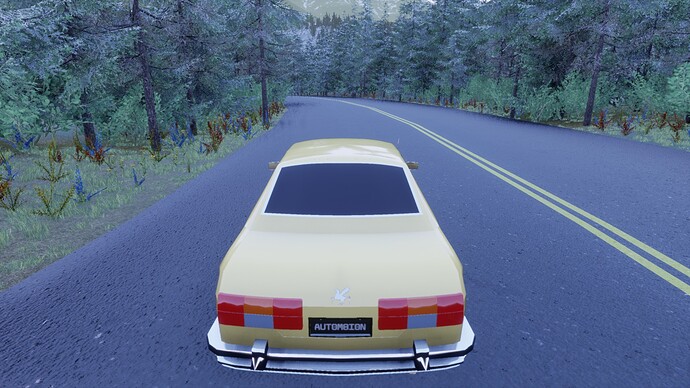 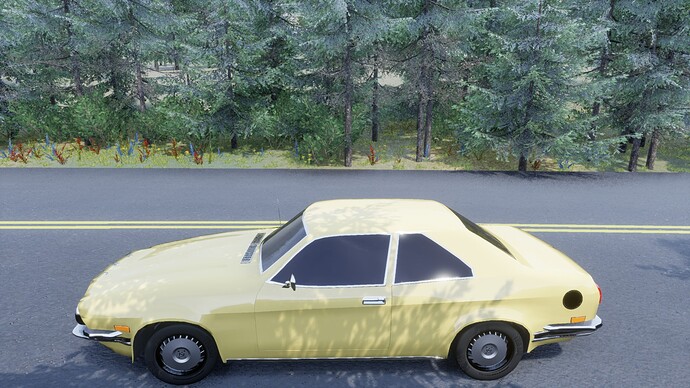 That is a fairly close approximation of a Mustang II considering the use of the Leyland Princess body, but is it as much of a paper tiger as its real-life counterpart? I’d like to take a look at its spec sheet, just to be sure.

I made it as simple as possible when it comes to the specs.

It’s very slow and handles and brakes horribly but I absolutely love it.

For some reason I’m kind of obsessed with these types of cars. I love the 1970s stuff. This game allows me to really see my imagination with cars come to life.

I just got a wheel setup too, I can imagine this will be fun and easy to drive on it once I set it up.

I also had no idea that this is a Leyland body. I just thought that the front kind of looked like a Mustang. I discovered by chance that you can turn the hatchback into a coupe or sedan by pushing the roof in all the way and stretching the rear out; very cool, and exactly what I was hoping for. The Mustang II is actually one of my favourite car designs. Even though it is not really that good of a car, it’s kind of a guilty pleasure I guess. I’m just a car nerd.

I vote for HMC

Yeah, but still, I vote for HMC for rights to the name…

Thanks. HMC is actually a “company” that I created 10 years ago on the old Google SketchUp 3D Warehouse. I 3d modelled cars from about 2008-2017. But, now that I discovered this game, I’ve moved over to this.

With love from that other HMC company.

My HMC will live on in history in the Google Sketchup 3D Warehouse.