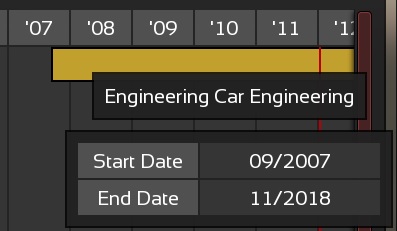 I selected the 2007 116.5" model type, the one that looks like a rounded-off Cadillac ATS. I designed four trims;

And the engineering time is ELEVEN YEARS AND TWO MONTHS. The game will almost be over by then. I can build a Huge 1 factory with time to spare.

This current system does several things:

It is not how I would do it.

What engineering needs to get done needs to not be duplicated; two of the four trims are the same Sedan platform, but I’m paying for it twice. I also shouldn’t have to re-engineer the standard CD player I already engineered for another model - that familiarity bonus is far too miserly.

Try to lower quality, -5, -10, on everything and see what happens to the engineering times.

Sounds to me like you’re neglecting important information, beyond the fact that there currently is a bug in how engineering times are added up in sections.

With that massive project of yours, I would think what you did is not to share many interior (or other list items) choices, but rather “have them all”.
Even in the late game engineering times don’t take more than 5-6 years when sharing components. What I’d really like to see is your engineering summary table, which includes all the vector lengths and will reveal what you’re doing that is so counterproductive to getting those projects out.

Following up on this topic,

For that campaign, I made no changes, additions, or subtractions from the base research/engineering section. I left it completely default throughout the entire run of the campaign.

What is the background for when options become “available” in the car project section? Like, the Infotainment entertainment option - does that become a selectable when engineers reach a research milestone, or is it triggered by a date (and then the engineers have to catch up), or a combination of the two?

Is it possible to scale up the research section with funding, so options unlock and become available a decade earlier than everyone else?

With that massive project of yours, I would think what you did is not to share many interior (or other list items) choices, but rather “have them all”.

Ford sold the Falcon between 1959 and 1963 with the below options. Is this even possible in Automation to achieve?

Ouch! You should definitely avoid an 11-year engineering cycle at all costs. I would never sign off on that. I can verify that it’s possible to have a lot of trims. Seat sizes and body shapes add surprisingly little engineering time. However, there’s a much bigger difference between interior and entertainment types. There’s another thing that exacerbates this issue a lot in the late game: new entertainment, and new safety tech types. When you unlock them (and this happens also because you have R&D at this point) they replace the old ones on the menu. Normally I try not to re-engineer safety on a facelift, but when all your safety options get replaced, you have no choice and it’s 24-36 months right there. Entertainment is a big one too. If your facelift has multiple entertainment types, which were not in the previous facelift, it’s going to add up FAST.

It’s best to try to keep the total number of options to a minimum, but with body shape and maybe just two interior options, you can still hit a lot of markets. In my recent game I had a model with 5 trims: a wagon, Premium sedan, Sport coupe, Ute, and Convertible. When I had to facelift it in 2012, I managed to keep it to a strict facelift time of 36 months, but with some compromises. They all got Standard instead of Advanced safety (NEVER mix safety types) and they all got Basic HUD’s, even the premium one.

You’ve also really got to watch out for early unlocks! If you have a lot of R&D and are using a tech early, you will find it has an insane engineering number. A few points of negative quality can take years off of your engineering time- that’s always worth more than the 4.6 points of competitiveness you lose for having -5 quality ESC, or whatever. I usually prefer to use more basic entertainment systems rather than negative quality, because it affects interior too.