Hello everyone, I am thinking of starting a touring car competition once the new update comes out, and thought that it would have been a nice idea to make everyone have the same type of engine. I would do it myself, but I am a terrible engine designer,so instead, I am starting a competition. The person who wins the competition, will be an official engine supplier in my competition.
Here are the rules for the engine:

Competition ends on June 27th.
Anything else is up to you. I will try to do one just for the sake of it, but no guarantees.

You haven’t got a requirement for induction (NA or Turbo), cost, manhours, economy, MTBF or anything like it? Just raw power?

Sorry, I didn’t expect for anyone to respond that quick.
Will update in a second.

Ok, post is updated, let the best one win.

It’s fine.
The engine should have 30000 km of MTBF on its own, i.e. without it being attached to a car?
There is a direct relation between power and MTBF in the sandbox engine designer, thus limiting the power output there
Also, there are two types of costs, the man hours and the material costs, the 3000$ limit is for the material only?

[quote=“RoninGT21”]
Here are the rules for the engine:

Anything else is up to you. I will try to do one just for the sake of it, but no guarantees.[/quote]

IMO, your rules aren’t nearly tight enough and you’re going to get engines with much, much more than 300hp. For example: 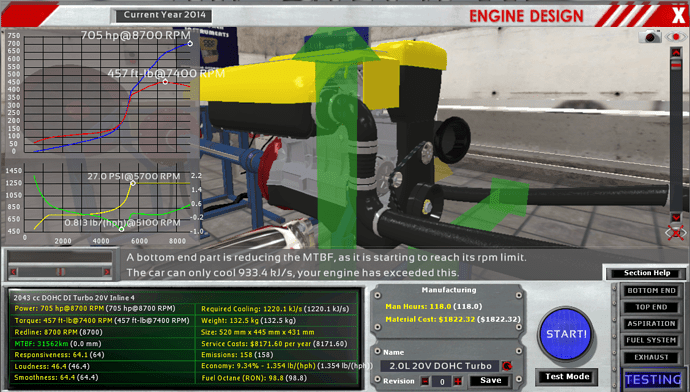 The maximum cost is much too high for this type of engine, the above engine has a Mg block, Ti rods, DI, turbo, etc. and it’s not even close to being over budget. $1500 would be a much more reasonable limit. Any limit over $2000 might as well not exist because it won’t be any kind of a limiting factor. And a limit on man hours would also be a good idea… 100?

I would also strongly suggest that you add a limit to the cooling requirement. See the above engine and its ridiculous 1.22 MW cooling requirement. This is an engine that needs a car model designed entirely around an enormous radiator grille, and I’m quite sure you don’t want that. Setting a maximum cooling requirement of 400 or 450kw would also keep the power in the mid to high 300’s which is much more in line with what you seem to want. For example: 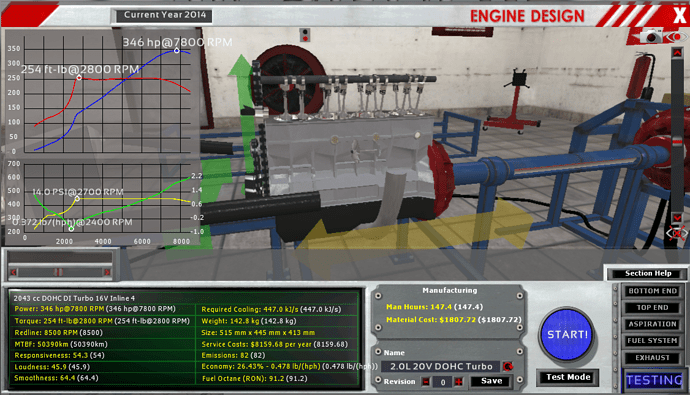 Or you could come at the problem from the other direction and use some tried and true methods of power restriction such as a limit on maximum boost pressure, 1 bar perhaps? or a limit on the size of the compressor wheel as a sort of poor-man’s inlet restrictor, perhaps 40mm? or maybe even less?

I think they are tight enough, considering this isn’t a computerised challenge. This isn’t simply a cheapest/most powerful/most torque competition. It’s whatever performs best to his expectations. Although giving a max manhours might not be a bad idea.

having this said, I’ll gladly take a shot myself.

Yes, the limits are fine for what the challenge is. If it was to build a powerful engine, the rules would probably be different.

I think they are tight enough, considering this isn’t a computerised challenge. This isn’t simply a cheapest/most powerful/most torque competition. It’s whatever performs best to his expectations.

This isn’t a competition, it’s a request for proposals. He wants a specific type of engine for a specific purpose, but his specifications don’t match that purpose or that type of engine. His design brief is too broad and in the places where it’s specific it’s specifying values that don’t suit the engine he has envisioned. Responses to his RfP will be all over the map in terms of their suitability for his purpose through no fault of the bidders. If he gets 20 bids and 2 or 3 are close to what he actually wants, IMO that’s not a success when a more focused and suitable set of specifications could have produced 20 viable options.

Agreed, while the parameters for the engine publicly available for things like BTCC etc. aren’t much beyond what’s been specified in this thread, except a vague “low cost to produce and maintain” (and for example a proposed ceiling of 25000 GBP for the BTCC, though that isn’t the same as material cost), other factors come into play here, namely the fact that the cars used must be based on large volume mass produced models. Those cars generally don’t have giant fat grilles all over the place, for one thing.

Therefore I’d support a leaner material cost and maximum man hours restriction. I’d also support a maximum cooling requirement, which would effectively put a cap on the amount of power, as well as just how much boost the turbo puts out, and also mitigate the concern over whether the 30K MTBF requirement will be affected by lack of chassis cooling, since touring car rules require the front to have a radiator grille anyway.

well let’s see then. Manhours/production units, an estimate of 100 is needed to build a Volkswagen Golf, whose price starts at 17000 GBP. I have no exact clue how much the material costs are, but I estimate about 7000. this leaves us at 100 GBP/manhour. Quite a lot of manhours available in your budget then

Why are we making more rules for this? Lets just build some engines

Why are we making rules for this? Because I have trouble with restraint, that’s why

But I guess unless you have lots of experience with the building tool you won’t know what a good engine for the job really is, so you have a point there. I’ll just make a submission based on my own interpretation of what a good touring car engine is!

A good touring car engine is one that gets your touring car around the race track faster than the other guy without breaking any rules. And so, in that spirit, here’s the nastiest fire-breather I could put together within the bounds of the rules. 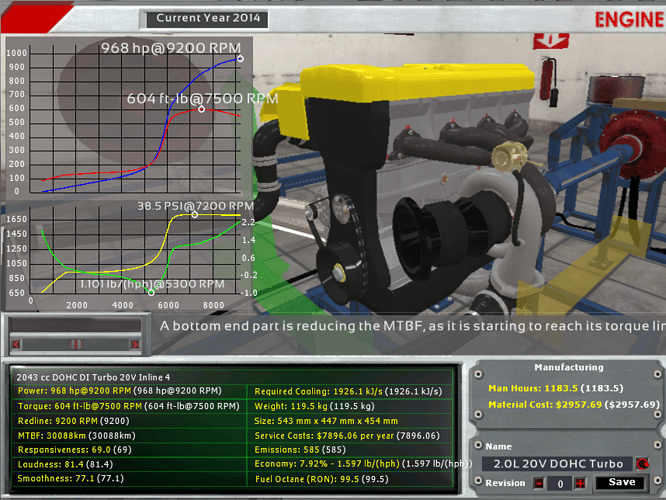 Ok, I am very thankful for your input. I completely forgot about cooling.
Yes, there has to be a reasonable cooling limit, let’s say 450. Man hours wise, you can go as high as you can.

Here is my, as promised, pushrod entry. It’s tiny, lightweight, and ultra responsive. 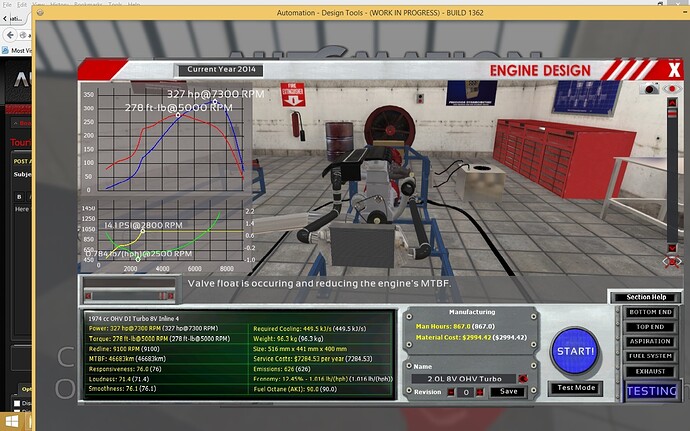 looks awesome! Send it my way, I’ll test it.

Checked! =)
So far I have two submissions for the engine, and they are similar in power. Just to keep the intrigue up a bit, I will not tell who is leading at the moment.
I will keep the competition going for two weeks, hopefully we’ll have more than two submissions =)