I bought the game on steam and downloaded everything for playing the beta, but when I click on Play Open beta, the game doesn’t start, does someone know why? Please, help!

I love the new fixture features and photo scene but damn did the game just get like twice as unstable? Crashing when changing menus (photo scene, car manager, main menu, options) is super common now

EDIT: Also, forgot to say, some cars let you use the trim material for fixtures and some of them don’t.
EDIT 2: And it uses almost 2 GB of RAM while doing nothing.

Does it give you any error message? How far into loading the game do you get before it doesn’t work? Are you on a decent gaming system or a weaker computer / laptop?

and i’ve sent some error report just a few hours ago about the photo scene crashing. and i’ve found it consistently repeatable.

when i pick a car, from the sandbox car list, go into the photo scene without loading the car first. pick one of the 2 green screen background. take a screenshot. get out.

pick another car, go into the photo scene again, this time it still loads the last scene i loaded (new feature?), take a pic, get out. it’s when i get out of the photo scene on this 2nd time that the game crashes on the loading screen.

and it crashes and freezes at the same time. it says it crashes, but after it crashes, the game doesn’t auto close. it just froze until i close it with the task manager.

update:
YE FUCK THAT. i’m crashing every 2nd time i get out of the photo mode

No, it doesn’t give me any erro message, if I click on the other play button it starts, but if I click on Play the open beta, th window disappear and it doesn’t start, I’ve already try to skip the menu and go directly to the beta, but it doesn’t work. Well, my computer is quite decent, with an intel core i3 3.50GHz, 8GB on RAM, Intel® HD Graphics 4400, Direct X V. 11 and a 64 bits Windows 8.1

So you know how you can access all your cars by pressing this button?
Well it fucks up morphs if you do so.

Alright so as we can see, this is what this car should look like. Keep this in mind. 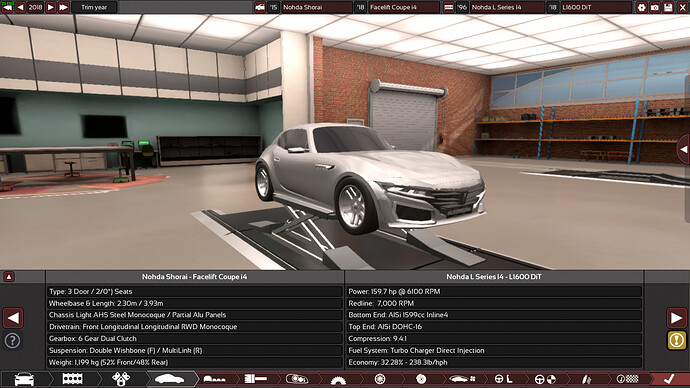 Then I access the initial car using this method, and lo and behold, I get this

Yes, that car is supposed to be the same as this the car I first showed. But wait, it gets better. Because if I close and reopen, I get this.

Yeah, ummm, you broke the game, peeps! There was mention before for a patch about correctly displaying the power at the wheels, that’s now the figure you get in the engine dyno as well. The engine I was playing with went from 157Kw down to 139Kw in one car, and 131 in another.

EDIT:
Here’s another engine I tested to see what happened. Max Torque is unaffected. 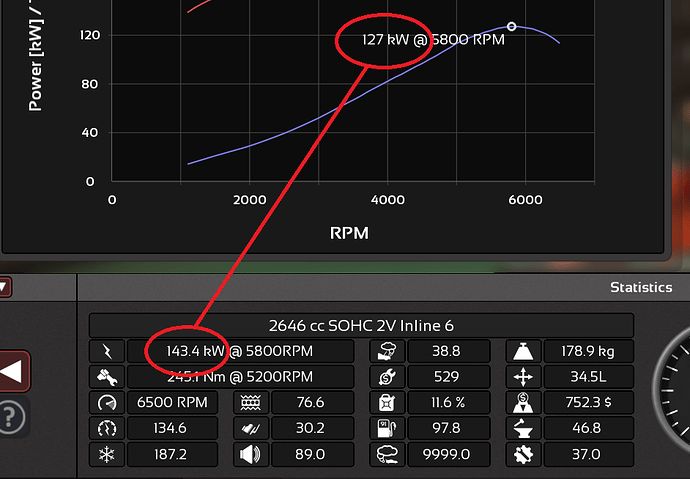 For some reason, don’t know if it’s a bug or if I did something wrong, the chrome texture has disappeared from the parts that are using it as the default texture. Sure, on most parts I can change to the chrome texture again, but on things like the glass in the mirrors or the badges it is a bigger problem…

I’ve noticed that as well. For me it happened immediately after the patch that was downloaded last night.

All my existing engines have changed in the same way in the dyno. but all in different ways.
For example, my standard 88HP, inline 4 budget city car with manual transmission has 81HP on the dyno. The automatic version, identical for the rest, has 77HP.

Even with the update, I still unable to play the open beta. It does the same, it only show me this screen, and if I click in the crcled button, the window shut down and the game doesn’t start. 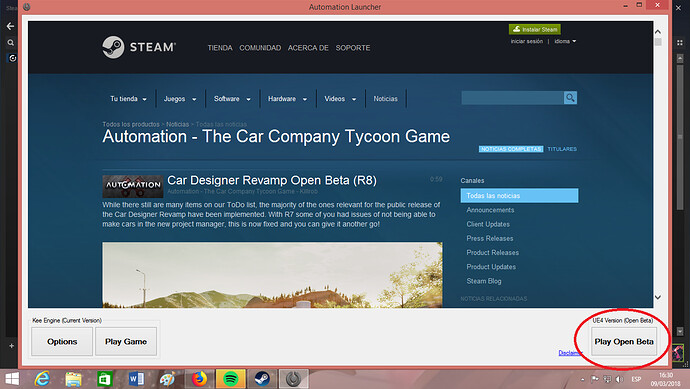 Have you opted into the Beta?

I’ve already tried that, but it’s te same, it appears executing, then synchronizing, and then nothing

What are your computer specs and DX version?

Something seems off with the bumper colour/texture of the 60s sedan model since beta R8. It also influences the texture for the mirror glass. 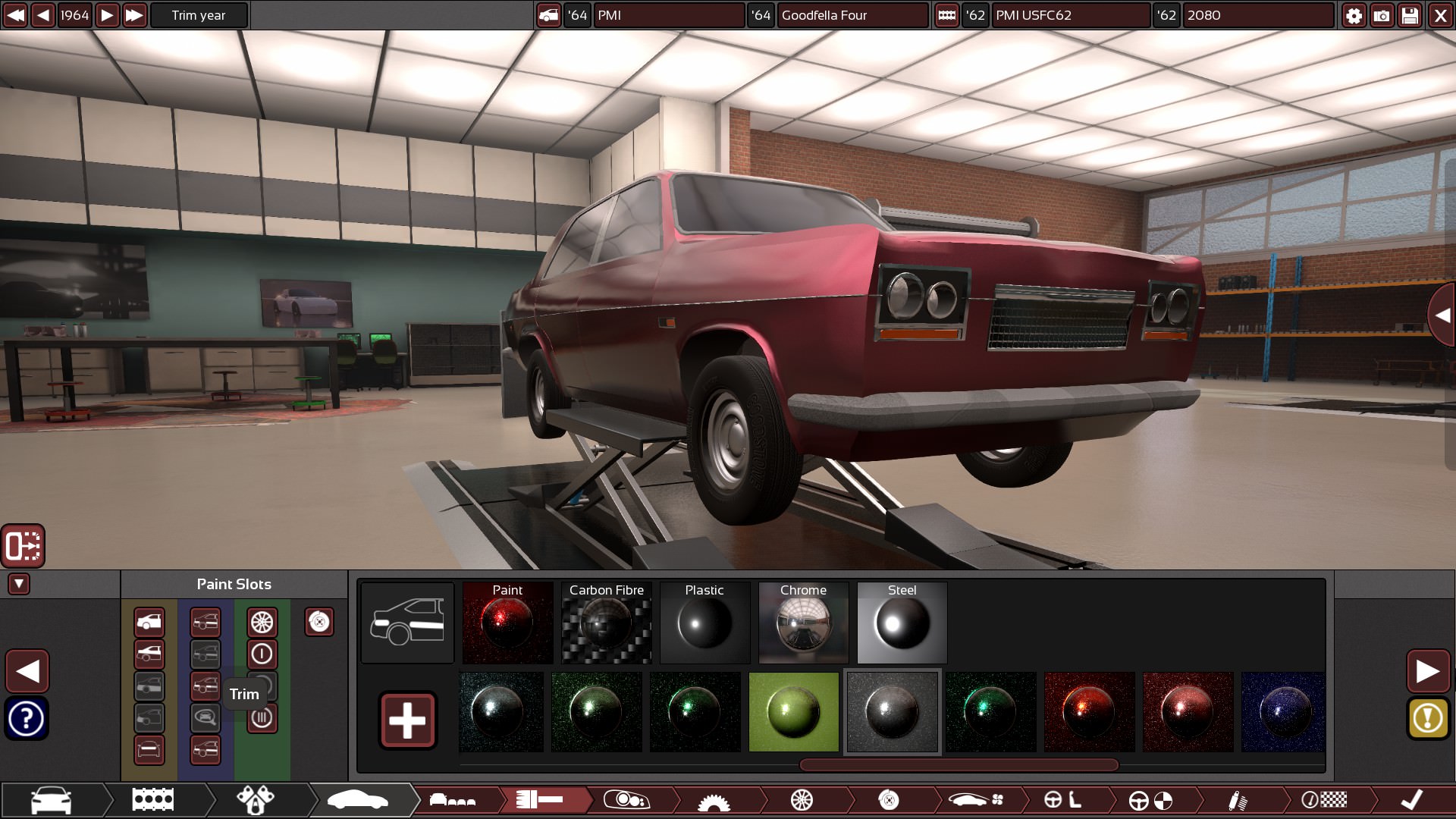 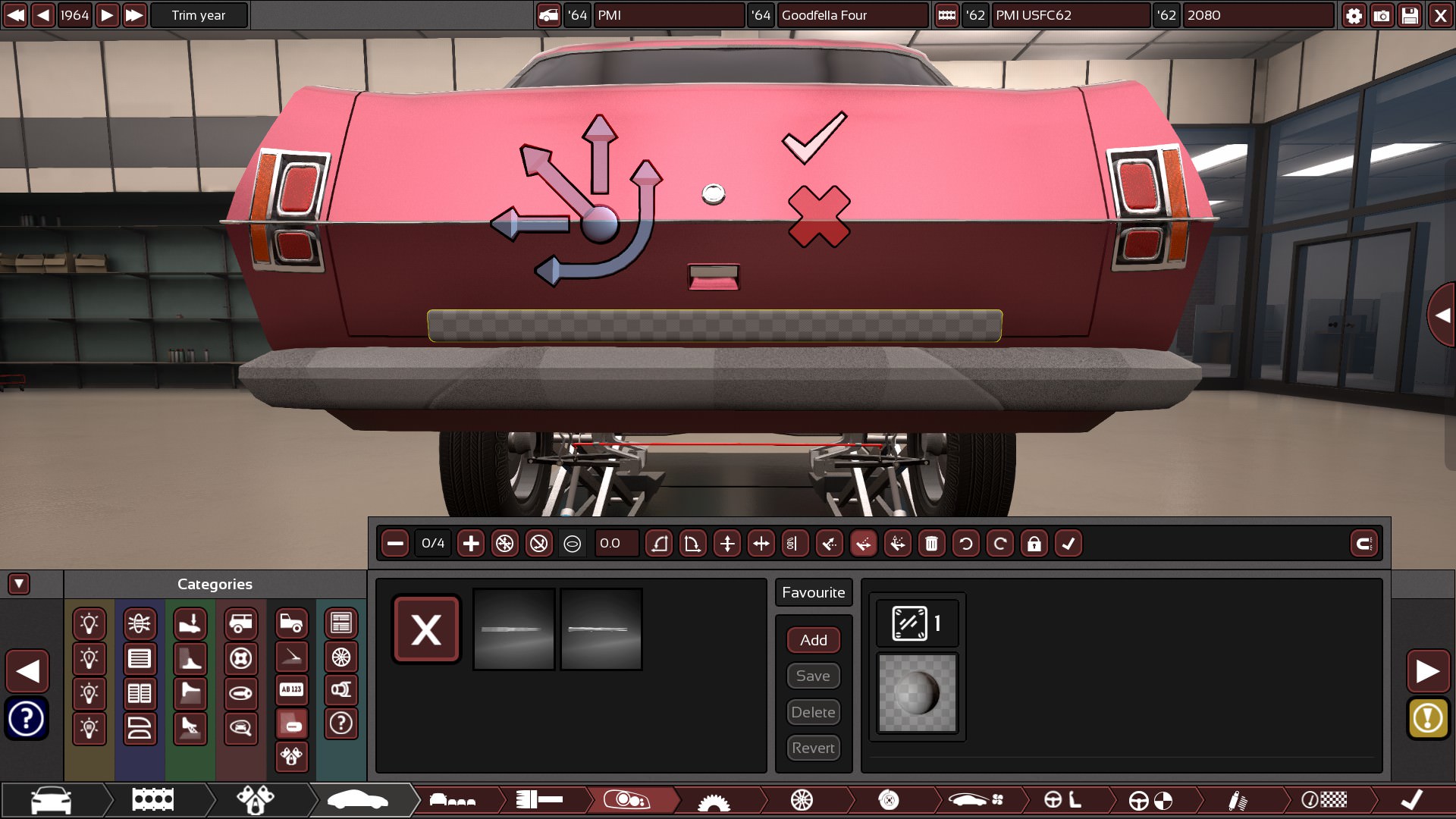 After this last update if I try to edit any car that existed before the update the game freeze.

Try to update your integrated graphics card’s drivers, maybe it is down to that. You should be able to run the game on low/medium settings. Best try to start the game in the UE4 safemode.

As with most things I post, maybe not a bug, but I can’t figure it out. The “cars” I make are… lacklustre on occasion, but even when I try a super-duper mega lux, I find comfort lower than it should (in my eyes) be. Even in 2018, with Hand Made interior and Luxury HUD at +15, I get a 1.5% penalty for “Entertainment Quality”. A Premium HUD cuts that to 0.5%. Shouldn’t there actually be a bonus somewhere there? Happy to be wrong if that’s what I am.