What computer do you use?

What computer do you use? Let’s discuss.

How many on the PC master race here?

Does it make me an asshole if I put high end desktop?

Let me know the specs, let me rosik a bit more

We … already have this kind of thread.

Oh how I wish that I’d just gotten 16GB… like hell am I paying the equivalent price for 8GB right now.

I just answered Gaming laptop since it’s not rly a standard laptop or low-end. A low-end laptop is 200-400€, a standard is more 400-700€ but my laptop is 1000€ and it’s very high spec, although not very much a “gaming” laptop like let’s say alienware laptops. (Also im a cheap ass when it comes to tech so the only reason i bought it was it was -40% or so)

What computer i use?
A black one with a silver front!

I have a semi mid-range desktop, probably lower-mid range but it’s decent.

Bought it all this year but it’s essentially a few years out of date. But, for some comparison, it will (roughly) play:
Battlefield 1 at 45 FPS (low settings)
Automation at 60 FPS (max settings)
Cities: Skylines at 40 FPS (mid-high settings)

With any luck it’ll play Assetto Corsa on mid-high settings decently, but I have to wait until Sunday to test that…

And as I write here… I’ll just paste what I wrote in the Computer specs thread:

My wonderful black and old steel box of power:

I had a trackpoint years ago, when I had some old IBM laptop, and that was an amazing thing. For me waaaay better than any touchpad.

It has three modes of input: TrackPad, TrackPoint Classic (which is the trackpoint and the red buttons on the top end of the trackpad) and the touchscreen

Enough with the jokes though too 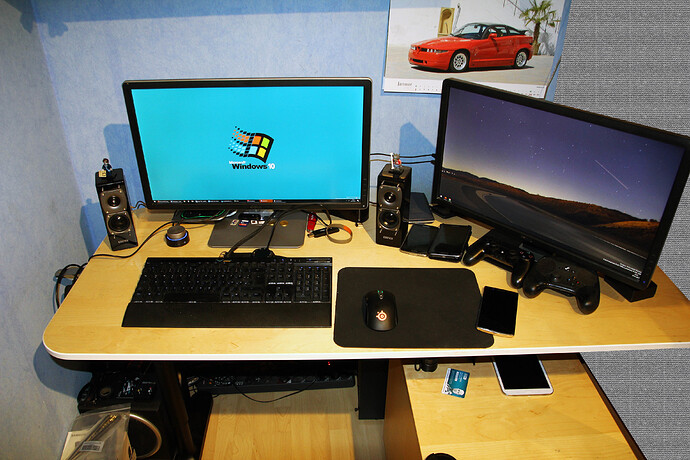 My Desk (Ikea something something) is the home of a Dell P2415Q (4k at 24") and a Dell U2312HM. Input peripherals are a Corsair K70 Lux RGB MX-Brown, a Steelseries Sensei Wireless, PS4 and Steamcontroller. Audio-Output is a Edifier S330D 2.1 System, the Headset (not visible) is an Audio-Technica ATH-ADG1. 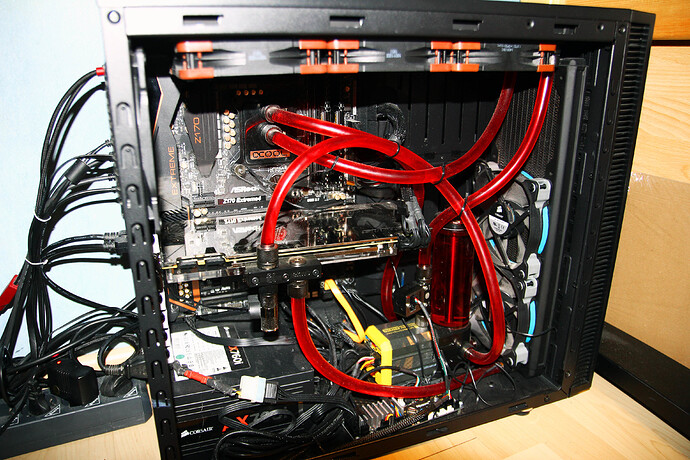 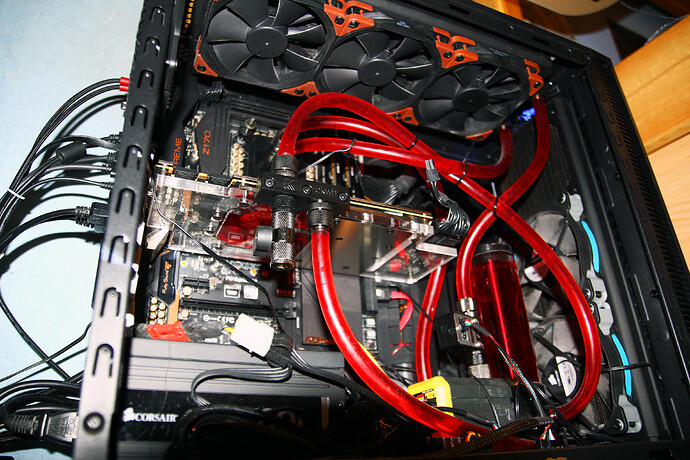 (Yes i know one fan is missing on the rad - it wont fit anymore.)

That thing is pretty much my current machine. Everything i do, is being done with that.

that game does have a few optimization issues doesn’t it! Nice specs though, big up BenQ and their monitors

@ramthecowy YES! Absolutely love the proper Thinkpads and their no frills industrial design. Weird not to see Windows XP on it mind you…

@pyrlix Knew you’d shame us all with some mega-rig, that thing looks awesome

Your PC is inferior, my motherboard is the Extreme 4 PLUS

By comparison, mine is a truly craptop

I play automation with medium settings at around 30fps and ETS2 with low settings at glorious 15fps (and project cars at the ultra low spects with maxium performance (overclock gpu) at around 12 fps).

That’s decent hardware actually. Your average laptop just isn’t meant for gaming and therefore has only a subpar GPU.

For gaming, money is much better spent on a budget to mid-range desktop with a decent gpu along with a cheap laptop (look on the refurbished / used market - occasionally there’s some gold in there) than by getting a high-spec / gaming laptop.

Got my roughly 800-1000€ spec laptop for less than 500€ that way, and it’s actually better than what you get as a consumer because business laptops (like mine is) are built more robust