What is your personal favorate way to increase HP

well i’d like something more usable though. when i meant 150cc, that is actually the capacity of my daily rider bike, and thats already upped from 135cc.

I’d love to see a dual quad carburetor setup on a four cylinder. Just to see it done.

It’s generally a good idea to never expect the claimed power increase of advertised modifications. A high flow air filter may claim a 12 hp increase, but you’ll probably see a 3 to 4 hp increase instead. Also some mods won’t have any appreciable effect unless complemented with another modification. You might get a better air intake and exhaust, but it’s when you fit in an aftermarket cam that makes the most of those other two upgrades then you’ll see a significant change.

with individual exhaust header and pipes! 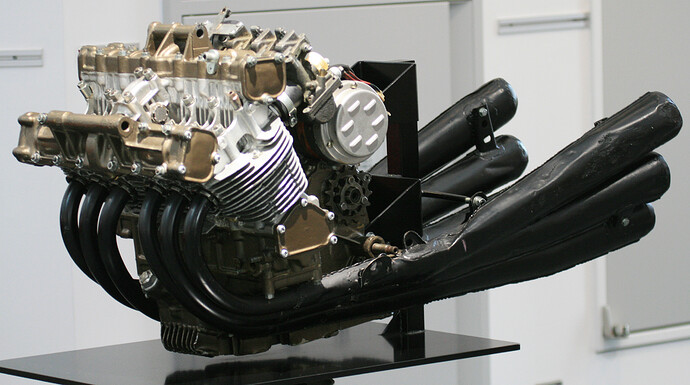 best of all? a 20kRPM aircooled engine

all this time and i just realised.

The best power adder for the money will always be a decent aftermarket ecu, fuel and intake/exhaust systems. Anything after this starts to add big dollars, however without the fuel system or the brains to actually control the power and regulate A/F ratios its pointless adding turbos or raising boost pressure from factory turbo’s or blowers.Porting and polishing can go a couple of ways, if you have an old cast iron v8 you will see good gains however modern cylinder heads are very well designed and it’s more likely to hurt your power unless done correctly with a flow bench and someone that know;s what they are doing. And polishing the combustion chamber is pointless, smooth radius turns, smooth valve reliefs and the correct tract volume are what matter here not how pretty it looks. Also with older vehicles 1980-1990’s having the engine block machined and the cylinder head rebuilt and machined (think replacing a head gasket) will give really respectable results as decking the block and cylinder head/s will lower the size of the combustion chamber and slightly raise compression.

And I can highly recommend not using nitrous as a power adder on a street car. It can be very temperamental and backfires can do alot of instant damage add to that the fact that the spray hits all at once (unless you have progressive controllers and even then they hit hard) destroy spark plugs (try having to change a set after each time you use the spray, it is illegal and is much harder on the engine block than a turbo or supercharger that can have its boost pressure regulated.

Nos stickers. 5hp gain each. 10hp for holographic ones. If you want a serious track car; you’ll want a faster blinker relay, and a 6in diameter exhaust tip.

Seriously though… increasing an engine’s power is a fine art that has to be matched with the intent of your vehicle.

Carbureted engines are easier to work with. Adding more carbs; ideally a barrel per cylinder, with equal length runners and individual throttle bodies nets a good power gain, and is a pretty straight forward job.

There is no easy way to get more power in modern engines. Pretty much your only hope is an ECU re-tune; which is expensive, provides little gain, and is usually detrimental to the engine’s longevity, as very few tuners are knowledgeable and talented enough to do it right.
The classic “cold air” intake and gutting the cat may net you 5 horses at peak, but you’ll lose about the same on low-end; the last thing you want on a street car. Hotter cams pose the same issue.

All in all, my vote goes for forced induction. It may not be cheap or easy, and reduces engine longevity, but it is the best way to significantly increase power across the whole range of engine speeds.