Founded in 1908, AG is a British specialist car company located between the two fictional cities of Alston and Garstang somewhere in the UK. (yeah, I’m being sorta vague because I don’t know enough about UK cities.)

Alston and Garstang Limited was originally just a motor-bike building side project of the Williams brothers in 1902. Their bikes soon became popular, and they decided to put more time into building motor bikes. Well, come 1905, their motor bike buisness was so successful the brothers wanted to expand into four-wheeled contraptions. So they sold their motor bike buisness and started crafting four wheeled contraptions that turned into automobiles.

In 1907 they realized they needed to expand much bigger than their little team of a dozen or so individuals, so they founded the Alston and Garstang Automotive Company (AGAC) in 1908 with some help from some wealthy investors. From there on, the Williams brothers focused soley on four wheeled automobiles. Initially their “vehicles” werer little more than tin, open-cockpit sports cars with a 22hp engine. They were met with mild success, but lingured in the shadow of other companies sports cars. So the Williams brothers went racing to gain attention. In the process, they learned a lot more about how to build a faster, better sports car.

Then the Great World War hit. AGAC “factories” were converted to help the war efforts. The steel industry production increased, and AGAC volunteerily gave up all automotive interests to help build the newest technological advancement… Planes! Throughout the war, AGAC was stressed to the limits trying to build and design better planes, and for a short period of time, they even worked with BMW in designing plane engines.

After the Great World War ended, Alston and Garstang Automotive Company was re-organized into what became the well know Alston and Garstang Limited. For the first time in 1921, Alston and Garstang Ltd. used the now famous circular AG letter logo on a brand new automobile, the AG Prince. A sporty 2-seater with sweaping curves and an open-cockpit design. It was later compared to the 1924 MG 14/28, as both were sports cars and used sub 2.0 litre four cylinder engines. AG also tried their hand at a four-passenger coach in 1926, and found only mild success.

October 29, 1929: The US experiences the worst stock market crash in its history. Then the Great Depression took hold. The effects were felt all the way across the pond. AG Limited was struck hard, and voluntarily went into liquidation. There was no new production from the end of 1929 until a single special order for 2 cars came from a wealthy tycoon in 1931. The Williams family was still tinkering with cars, and built two identical sports cars for the wealthy tycoon. These two cars had special, hand-crafted aluminum bodies and four cylinder engines with special overhead cam cylinder heads. The tycoon loved them so much he financed the rebirth of AG in 1932 as a tiny specialist company. By 1934 AG had a tiny production of 89 AG Model 17s a year. Mostly using old engine designs from the 20s with the overhead cam cylinder head, these Model 17s were equipped with AG’s first 4 speed manual transmission.

Nineteen forty, what would come to be known as World War II was underway. AG was morphed into a plane manufacturing plant to support the war efforts. In 1942 there was a four month shortage of supplies to build planes, so AG did what they could with what they had on hand. Luckily throughout the war the factory stood, that is until 1943, when a bombing raid blew it up. There were only two casualties in the factory. AG was now without a factory, and unable to get enough materials to build planes either.

I created this company primarily so I can complete the storyline for some of the AEA cars.

AG will eventually be absorbed into AEA’s performance division called Redhawk Performance Group. (not sure if I want it before or after the split though)

In 1945 the war finally came to an end, and AG tried to get back into automotive manufacturing. Heavily riding the last money from the UK government, AG released an aluminum bodied coupe in 1947 with their outdated OHC conversion inline 4 from the 1930s. They called it the Model 20. Built on their usual steel space frame, it had a double wishbone suspension front and back. It was a front engine, rear wheel drive design with their four speed manual transmission.

While the Model 20 sold reasonably well, it was not enough for the company The engine was holding back a decent car design. So in 1948 the company started researching into a new engine. This lead to the creation of their 1800 series inline 6 OHC enigine in 1951.

The improvements from the i4 to the i6 were imminently clear. The I6 OHC engine had nearly the same power as the stressed I4 did, but with much better reliability, better fuel economy, and it was a much smoother engine. 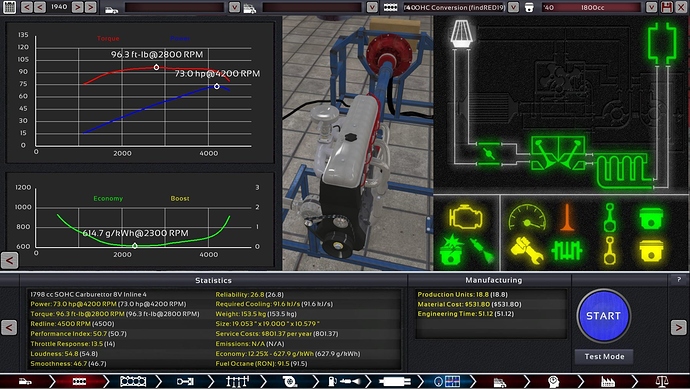 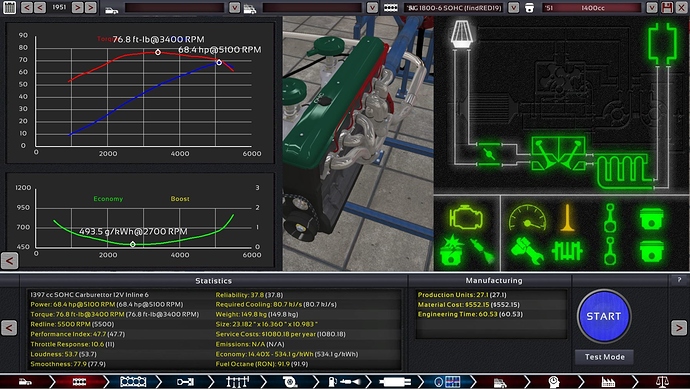 So the Model 20 got updated in 1951 with the new I6 OHC engine and the coupe trim was re-named C-6 to reflect this. To keep up with the competition, AG also tweaked the suspension and brakes, but that didn’t keep the sales from falling. So AG started researching mass production to have at least one steady source of income. With sales falling, AG also started developing a brand new open-cockpit sports car in 1952 to revive their legacy. Little did they know they would engage in a surprise contract with a newer American company in 1953.