I decided to make a new car company, a French one again.
It’s inspired by originals Citroën before they where bought by Peugeot in 1976, but in a more premium (and why not luxury on the most high-end models) way like Audi, Mercedes…
I’ll try to be realistic as far as possible, imagine this company if France made premium car like Germany does, but with a more “exotic” design.

It’s mostly based on comfort, and drivability. I do not rule out doing sports cars or more economic car, but I’ll try to focus around premium comfort (Sportscars would more be GTs)

There is no order on the release of the cars, I’ll do them when I’ll have inspiration. But basicly every car released by model will be in chronological order.

Now let’s go for a Little bit of lore:

Founded in 1950 in Paris, France, CABART-DANNEVILLE AUTOMOBILE was created by the two young partners, a designer: Michel CABART ,and a engineer: Didier DANNEVILLE. They were working on many prototypes after war in 1947, but they decided to run the company in 1950, and to product their first model. This model is like they said “that’s what our company philosophy is”. It’s a long car, with 4 double wishbone suspension, made to “enjoy a little bit of comfort after the war” like Didier liked to say.

The first car producted and sold was the OPERA, equiped with a 2.6L inline 6 of 80hp.

The 2nd generation of OPERA was released 7 years later, in 1957, and the model is now a Grand Coupé only.
The engine is the same but modernised, up to 92 hp and a more available torque.

In 1984, CABART-DANNEVILLE AUTOMOBILE introduced a new model, a GT, the Tania Tubo, mounted with a 3.0L turbo V6 of 267 hp and 326 Nm…And well, this is a FWD with hydropneumatic suspension (the same as the Opera GC).

And that’s in 1996 that Cabart-Danneville Automobile release the MKII Tania. The watchword of this car has always been the originality, It doesn’t looks like any other car, and the MKII is a succesful mission on this side.
But not at all, the very special design and the fact that the car was only available with an I6 of 226hp, made it a difficult car to sale. Cabart-Danneville Automobile had to stop the production at 2532 cars, and this car is now rare and the rating begin to going up.

In 1998 Cabart-Danneville decided to produce the quirkiest car ever. Even quirkier thant the Tania MK2, based on the same idea and designed by the same person, the Xorvia is a cabriolet with an evolved version of the V6 from the Tania MK1, boosted to 250hp and with a way better power curve. The particularity of the Xorvia, exept the design, is the engine, it’s mounted on the rear of the car. Even if Cabart-Danneville make great effort on drivability, this one what quite hard to drive fast because of this engine displacement. But no worries, on normal driving, the ESP will protect you from the danger of the RWD.

Today this car is rare, because like the Tania MK2, it’s a commercial fail.

In 2005, Cabart-Danneville Automobile introduced a new model, more economic, less premium, and more affordable.
The Rito 2.0i introduced a new 2.0L I4 of 125hp and a reasonnable comfort for a car of this category, due to the Hydropneumatic suspension that the brand fit in every cars since the Opera GC
This model helped the company a lot, for indeed it was the best seller of all Cabart-Danneville at that time, and was a very popular car in France.

But the Rito came out with a V6 version, to replace the Tania Turbo. Cabart-Danneville Automobile thinked that it was safer to produce a “sports” edition of an existing popular car than making one with its own plateform.
So the Rito V6 Sport’Activ came out later in the year 2005, with an exeption to the suspension: It was not hydropneumatic, but Active Sport.
This suspension made the reputation of this model because it was ahead of its time, although it increased the sales price of the car, which justified the only 500 model produced.
There was also a V6 version who equiped a regular hydropneumatique suspension, who was simply called the Rito V6.

In 2014, Cabart-Danneville made a sports version of the 2010 Rito (not made yet) : the Rito R, with a 2.0L of 286hp, this car of the GTI segment was one of the less powerful. But as the direction said, the car wasn’t made to be “chronokiller”, just a more sporty version of the regular Rito.

This is my car from the CSR78, there is also 2 differents trim, one for automation and one for beamng. The reason is simple, if you tried the President in Beamng, the grill broke the game and explode everytime you load it. So I removed the “galaxy” effect on the grill for beamng.
Car file: CSR78 - MasterDoggo - Cabart-Danneville RITO MKII R.car (79.4 KB)
Beamng trim: CSR78 - MasterDoggo - Beam NG version.car (42.1 KB)

For 2019, Cabart-Danneville Automobile announced the come back of the Luxury model: The Présidente.
The Présidente will come out with a new V8 turbo of 460hp on the most High end finish, the Élégance. Its announced as a car with every modern technology you can have on, and a level 3 autonomous driving. The objective of Cabart-Danneville is to hunt on the grounds of the Audi A8, and to try to find its place in the luxury sedan market.
This model is actually destined to the internationnal market, the first Cabart-Danneville who will be sold in North America, even in China.

Loving these… The Opera GC definitely has a Citroën vibe, not only from the headlights but the general line managed to be both sleek AND slightly awkward, which is sooooooo Citroën…

I’m sure that might also be true of the earlier GA and GB Opera models.

Certainly, but the earlier bodies from the game lack in options to go full Citroën - this is a company that went straight from the Traction (which indeed was modern for the 30s) to the DS (that no ingame body can emulate).
But that inline 6 from the Opera GA reminds me of something indeed

The Opera GC definitely has a Citroën vibe

I’m sure that might also be true of the earlier GA and GB Opera models.

They don’t that much, but I got no clue for that, game bodies of the era are not looking citroen-ish, this is why I skipped the 60’s

The GA and GB are mostly here for the lore, but I think the GC is, and the next one will be more interesting in design.

Update with a new model: the Tania Turbo V6

TANIA TURBO
In 1984, CABART-DANNEVILLE AUTOMOBILE introduced a new model, a GT, the Tania Tubo, mounter with a 3.0L turbo V6 of 267 hp and 326 Nm…And well, this is a FWD with hydropneumatic suspension (the same as the Opera GC).

A French, FWD, Gran Turismo from the 80s? This reminds me. 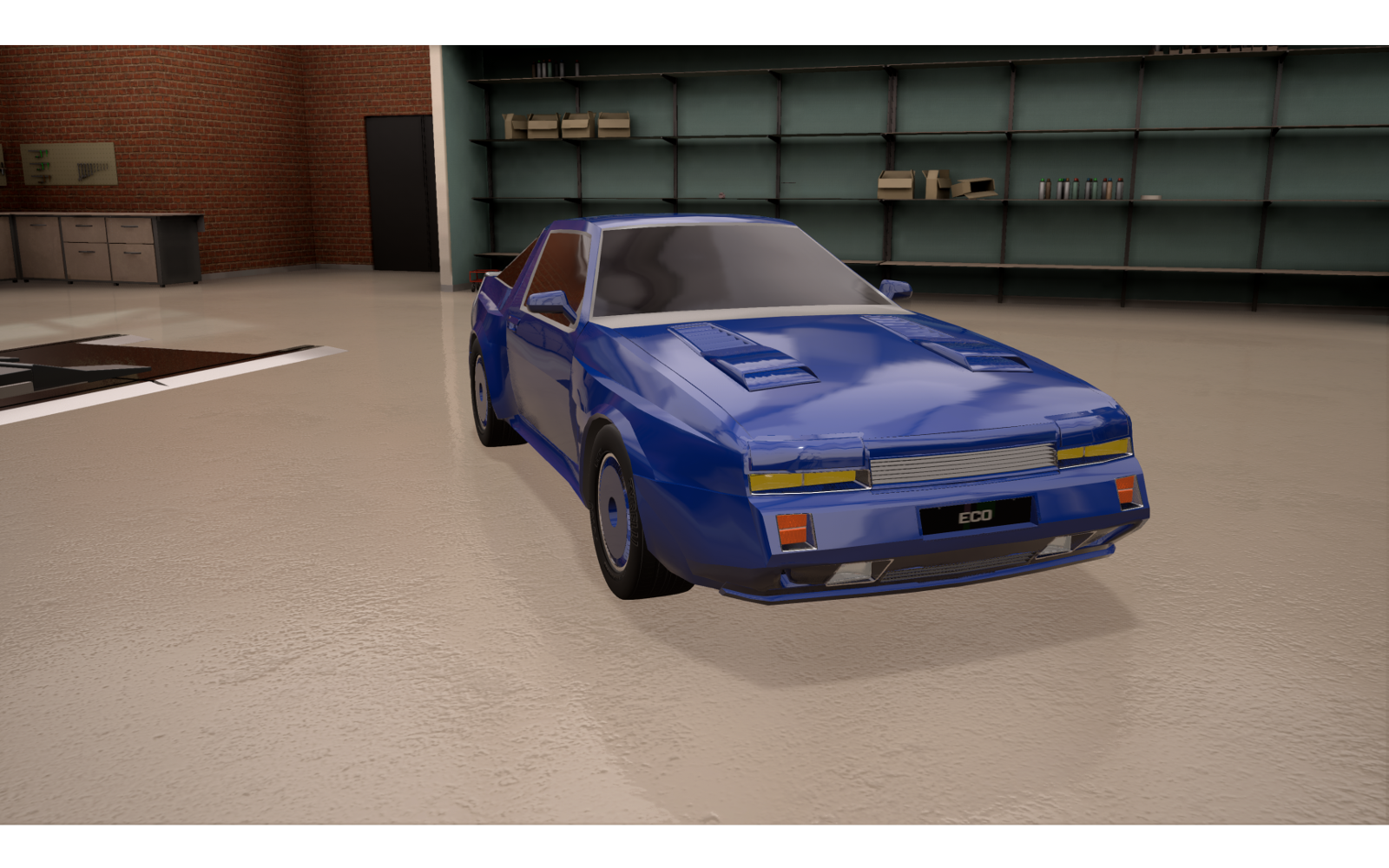 I modified a bit the Rito since the CSR, and the Tania since the ASC.
I updated the Opera GC: I adjusted some fixtures who were not aligned or centred, and updated a little bit the engine; and its now called the Opera GC Élégance instead of Affaire, It’s a lore choice I decided to introduce, now the most high end finish of any car will be called Élégance. Opera GC’s photos are updated too.

I wont release my CSR75 entry because it’s a really bad car I can’t fix (it oversteed, has a roll angle of a boat, and some s*** like that). I also drop a pic here, because the design Inspire every post 2015 model for Cabart-Danneville, espacially the grill, that is now the company Signature: The Galaxy Grill.

PS: I talk about a comeback for the Présidente, because I’m waiting for a Citroen SM body or something like that, to make the 1st model of Présidente.