Going through a vintage magazine the other day…

…then going and opening up Bring A Trailer, only to find this…

After the unexpected success that was the TKR-C, Kimura found themselves with an abundance of money to invest during the late 1980s - in this time, they decided to fortify their sports car lineup with a slew of new coupes. This consisted of the Kei-car Kinetic, the lightweight K1300-C, the affordable Helruna, and the 3rd-generation Silesta GT car. The 1990 Helruna would be the most successful of this group and the Silesta the most legendary, but the Kinetic and K1300-C faced more unfortunate fates despite positive reviews.

As the name implies, it was a direct successor to Kimura’s original sports cars from the 1950s, 60s, and 70s (K1500-C, K1600-C, K2400-C) and had retro styling inspired by the K1600 to boot. The K1300-C was based on a dramatically shortened Helruna chassis and used a 12V 1.3 Liter Inline-3 derived from the Avina subcompct. Weighing in at just around 920 kgs, the pure driving experience and fairly well-equipped interior were well received by the public. In addition, 4-wheel disc brakes and a limited slip differential were all standard equipment - the K1300C was marketed as the most hardcore sports car of the introduced vehicles.

Exclusively sold in Japan and in limited quantities in Europe, approximately 20,000 K1300-C’s were produced over the period of 7 years from 1990 to 1997. However, the success of this car was diminished by the far more conventional Helruna, the burst of the bubble economy in 1992, and the proximity of the price to the Helruna which had 50% more power and more space for only about ¥200,000 extra. This makes the K1300-C, with its unique design, construction, and focus a desirable enthusiast’s Kimura internationally. 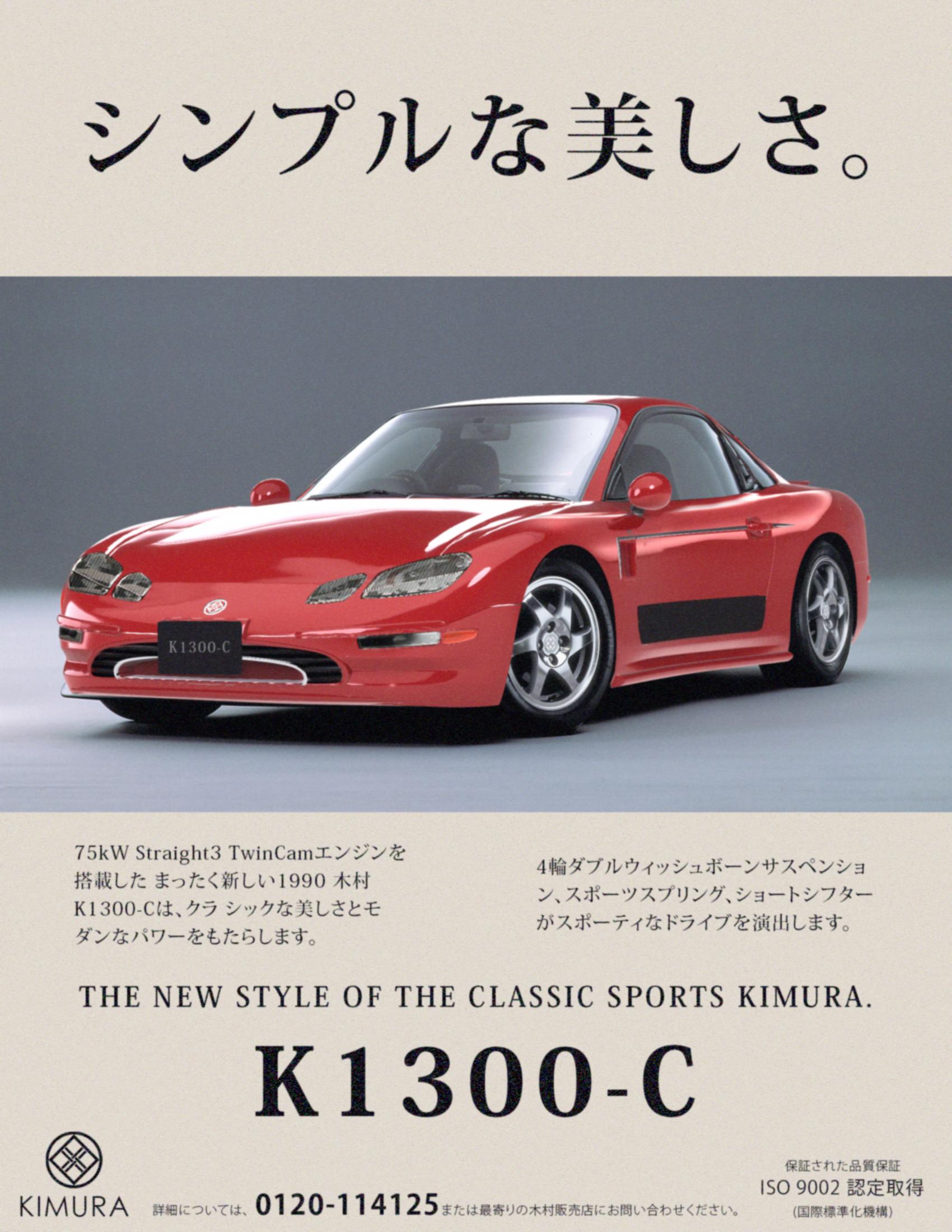 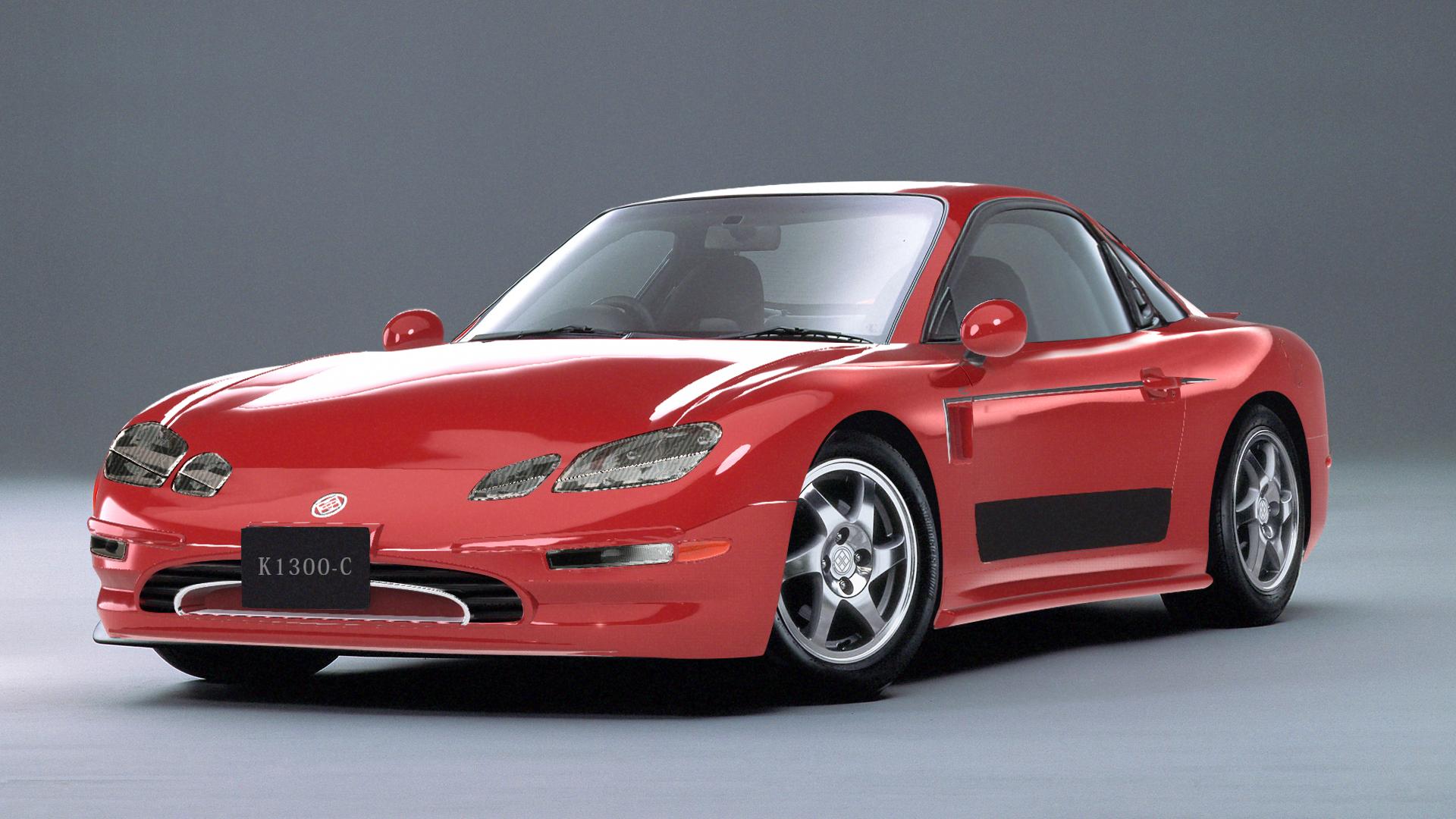 In 1990 Spander launches the second generation of the Spander BA, a premium “sedan” for the European market. Even though the car wasn’t bad (compared to the rest of Spander’s catalog), its peculiar style didn’t convince people to buy it. The fragility of its hydropneumatic suspensions, as well as its deplorable tendency to rust, made it even rarer today.

In the 1990s, Arion were expanding with more variety to their lineup, but did not forget about their roots. The Magnus was a pure British muscle car with a 4.0L Inline 6 producing almost 350hp it was able to do 0-60 in around 5 seconds if you could control it that well, being RWD and without and traction aids at all.

This is your chance to own a special Magnus, one of only 1,000 that made it to the USA and complied with regulations at the time, an odd third brake light was fitted to the roof. Not that it wasn’t already quite the odd car. The door lock is underneath the door mirrors, which also acts as the release if pressed down. The special flip paint was included for an additional price and made the brand quite synonymous with it. 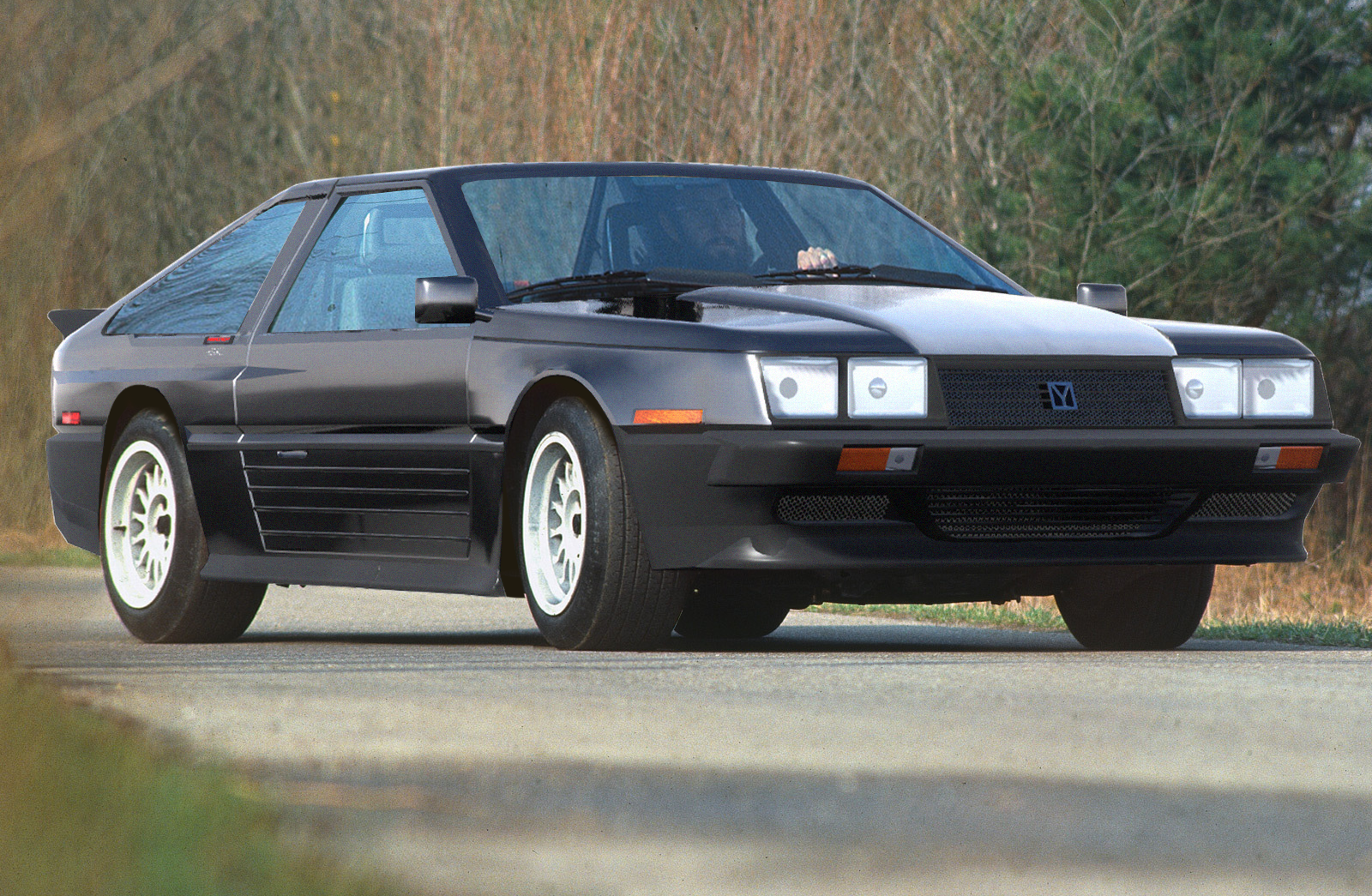 boomer ad.JPG801x611 70.5 KB
Our boomer friend from craigslist isn’t helping us with the exact specs of the car so I’ll step in and elaborate. For $39,700 in 1996 you get a 4L DOHC V8 sports coupe with AWD and a 6 speed manual transmission. It makes 367 horsepower at 7,400 rpm and comes with a few race ready special features. Like an R34 GTR you’ll notice it has a small screen in the center console both for radio tuning and performance data. No OBD2 reader needed here, that screen keeps track of trouble codes and service intervals too. below that is a traditional three knob air conditioning setup. This specific example wasn’t optioned with traction control but among the switches in the center console you’ll find ignition, battery cutoff, ABS, t/c (if optioned), launch assist (an optional rudimentary hill start system consisting of a clutch operated check valve in the brake line), and a few options for AWD torque split settings. The split sun roof doubles as T top panels as well. In spite of the extra weight of the comfort package, the whole thing comes in at a remarkable 3215 lbs (1458 kg) and does the sprint to 62 in 4.5 seconds. If you have the tires for it, deep in the menus of the car there’s an option to disable the 155mph speed limiter to take the car up to 175 mph with the stock tune. On the more technical side, the car was built both for GT1 and group A homologation. A bespoke V8 block was made for the road version to house the internals and the heads of the 4 cylinder turbo group A car. Rumor has it that one of the switches turns on a factory flat shift system that automatically voids the warranty of the car but it’s never been confirmed by the manufacturer.
DoctorNarfy 2020-06-28 04:15:53 UTC #50 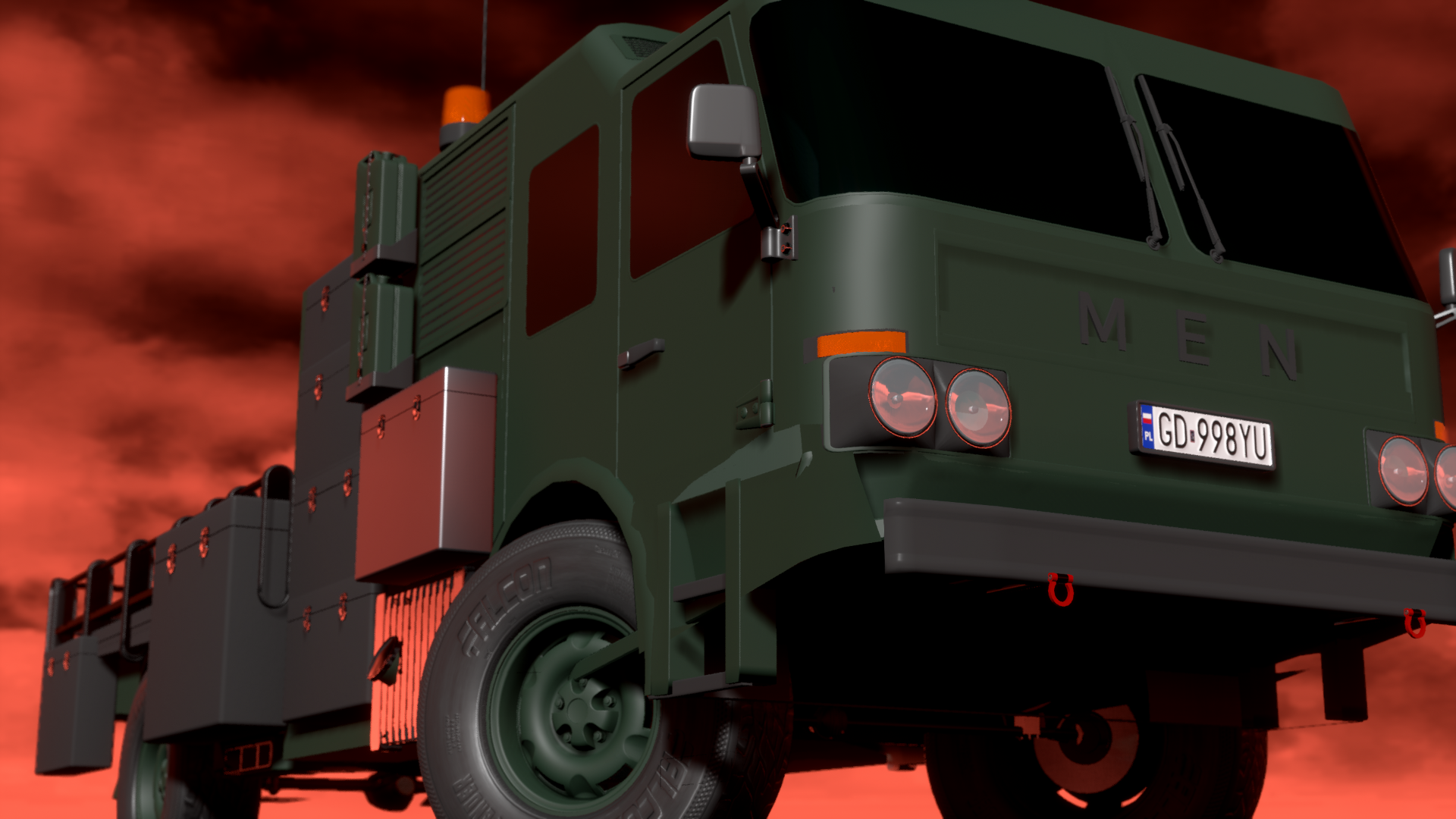 Ask Yourself. When has more ever been bad?

Powered by a 7L Multi-Fuel Inline 6, Engineered for the challenging terrain of Afghanistan, the MEN CRAP is the most powerful and capable transport vehicle in the Soviet Fleet.

Very much a Gibbs aquada… even down to the paint scheme. Looks good!

During the late 1980s, a small Gasmean buggy and racing truck manufacturer, Arak Racing, performed a design experiment where they combined offroad technology with the open-air concept of a convertible sports car. Impressed with the design, the owner of Arak Racing directed his engineers to produce a production-ready version of the concept. The final product was released for the 1993 model year, the Arak Apricia Spyder.

For the chassis, a heavy duty corrosion-resistant unibody chassis with front McPherson and rear coil-axle suspension keeps the frame of the Apricia rigid as it crawls over rocks with confidence. A Bunyan-sourced 4.0L OHV V6 making 200 HP mated to an electronically controlled four-speed automatic with low-range deliver power to either the rear wheels or all wheels through a part-time 4WD system with the ease of the push of a button. Independent front and rear locking differentials allows the vehicle to pull itself out of the most impossible of offroad situations.

While the Apricia has the guts of a serious offroader, it still retains the sporty looks and refinement of a premium sports car. The interior of the Apricia comprises of Pose speakers throughout the cabin (including the headrests) mated to a quality AM/FM Cassette Radio to enjoy jams while jumping in the dunes. Inside of the glove box, an extendable tray can be pulled out so that passengers can enjoy some table real estate for eating or mapping. The entire interior has been made waterproof with removable drain plugs in the foot well of the cabin so that the interior can be hosed out after a rugged muddin’ trip with the boyz. The detachable targa top is designed to fit in the rear boot so that sun can be enjoyed anywhere.

this round dont going to MEN CRAP will be a clearly signal that this forum is sponsored by the capitalism shit of EUA and their shitty illuminaties. We are full of your propaganda shit! Praise the power of people, we will not accept your tiranny anymore, your capitalist shitties!

leave the power to who deserves IT, the people!

AND WE HAVE A
CHRYSLER A57 MULTIBANK
YOUR FUCKING BASTARDS

During the reformation and change in the constitution of Japan, the Japanese Self-Defense Force (JSDF) required new modern equipment, with majority of their armories were of early cold war period equipment. With this at hand, the ministry of defense placed a military contract of a new multi-purpose utility vehicle for the JSDF ground force. Suisei placed their Yama Sharyō in competition with Toyota, a compromise was made. The Yama Sharyō was tasked with recon and light logistical works in the JSDF with its powerful 8.2L SOHC V8, two Toyota 4.1L I4 with the Toyota tasked with larger range of tasks with its 4.1L I4 Turbo.

The Yama Sharyō was based on the older chassis and used a 8.2 Liter V8 derived from Toyota. The truck weighed in at just around 2.44 tons, it is surprising drive-able for its size and is fairly well-equipped interior for civilian use. In addition, 2-wheel disc brakes and a manual locker which were all standard equipment for the JSDF and the civilian model. the Yama Sharyō was marketed as the one of Suisei’s most hardcore off road/utility vehicle in Suisei’s lineup.

The Yama was exclusively sold in Japan and in limited quantities in America, Asia and Canada, approximately 15,000 Yama Sharyō were produced over the period of 10 years from 1995 to 2005, in both civilian and military models with different variations. However, the truck was a odd vehicle for many Japanese, but was widely popular in the US. The oddness of this vehicle caused it to be overshadowed by other Yama models which were the far more conventional and successful. Its unique design compared to regular SUVs and trucks, construction, and focus on rugged reliable utility had its fair share of enthusiasts internationally. The story of the Kestrel is an interesting one. Back in 1989, MAD didn’t have a true halo model, nor had they built a two-seater before. So they launched the Kestrel GT, a sleek, two-door, rear-drive sports car powered by an all-new 4.6L all-alloy V8, and available either as a coupe or, as seen here, a convertible. Fully independent suspension - a first for the company - ensured that it was agile and involving on twisty roads.

Unfortunately, with only 225 horsepower, it wasn’t as fast as fans had hoped, so for 1992 they redesigned their V8 with dual overhead cams, four-valve heads, and variable intake and exhaust valve timing. The result was 330 horsepower and 302 lb-ft of torque - heady figures in 1992, especially in a car weighing just 1.3 metric tons. In this revised GTS form, the Kestrel could finally live up to the promises delivered by its svelte body, and at $39,000 AMU when new, it represented excellent value for money compared to contemporary Euro and Asian imports - hence its strong sales right up to the end of its lifespan a decade later.

This example is one of just 2,000 Kestrel GTS Spiders sold in the United States to be fitted with a five-speed manual gearbox. I’m not sure if it makes this car quirky, but it definitely makes it a heck of a lot cooler.

PAZ 7 originally was meant to be a boring, as-cheap-as-possible form of transportation in the eastern bloc, and with a 700cc engine it didn’t break any speed records. But with the 1994 facelift of the car, PAZ released the “ES” trim of the PAZ 7, which includes many sporty features such as a lip spoiler, alloy wheels, a massive 1.3 litre engine, and rear sway bars. The original price for this car was 12300$.

A little hatchback with a personal touch to it. Was actually a very cheap, spanish supermini car, but then SNB came around the corner. With AHB wanting to make an all-out version of it, they asked for help, and got an answer from one of the biggest engine makers, SNB. They had a non-released engine lying around, but they wanted to fit in a special car. The Burdel wasn’t special in any of the aspects, except for the paintjob and the quirky interior, full of strange solutions, like a column shifter for the automatic trims. So, SNB was ready to go, and the spanish company was willing to give a test car. It actually worked, better than expected.

The result was a thrifty and fun to throw around little car, but also scaringly fast car. The price tag of 30500$ made refrain a huge part of the market from buying it, hence the rarity of the car nowadays.