Welcome to the 1960 Detroit Auto Show, the “Biggest Auto Show of All”, officially opening May 1st to May 15th at Cobo Hall.

Press days run from May 1st to May 4th . You must reveal your cars on or before the press days.

With this year’s shows likely to be closed for awhile as well as the fact we are running out of years in-game, I felt it would be a good idea to start over with a historical show. I will not be hosting every show from 1960, so if you want to reveal a car for this year American or not, this is the place. I may host future years in a few months depending on how this show goes.

Awwwww yeah, this is gonna be good.

Since drivers.com (and most hosts from there) are non-existant back in the 60s I’ll may create a new car news reporter for that. But it all depends on how much time I still got.

BTW on last year I made a similar thread (for the 1963 Frankfurt Auto Show) but due to a lack of participants the show is kinda failed. Hope this one will be successful.

I hope to have a few entries to show off.

The Hampton Motor Group will be there.

From Longchamp, with love. 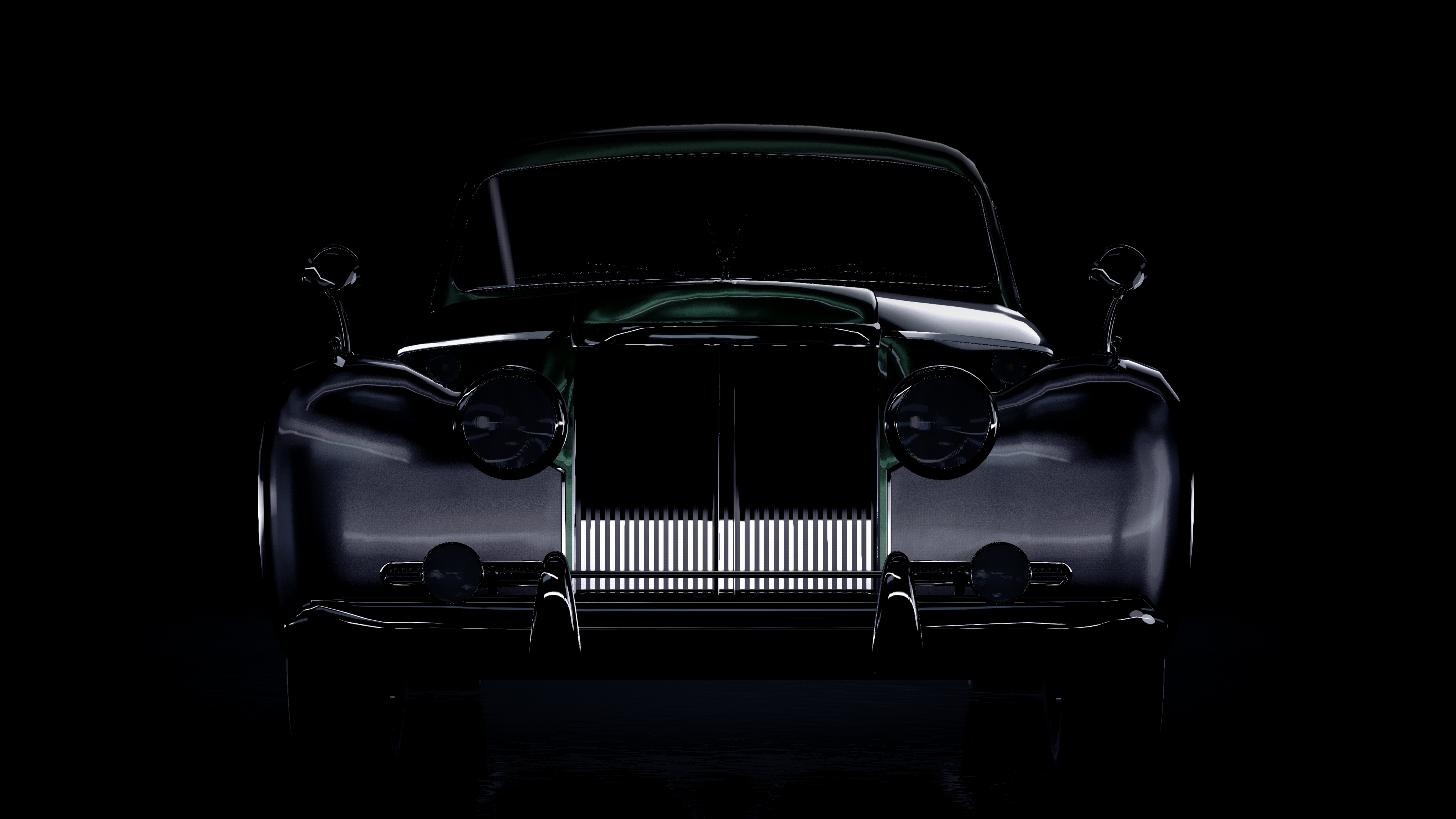 The Silver Sting will return.

What’s that coming around the corner?

The 1960 Westmorelane sees minor styling changes from the 1959 model, including toned-down fins with integral taillamps, and a more formal, square front fascia. But the big news is under the hood. While the trusty 369ci V12 and Auto-Magic 2 speed automatic are still available, there’s a new powerhouse available under the hood. The all new 420ci V8, backed up by the equally all new 3 speed Auto-Magic II.

Keep your eyes peeled for more exciting updates from Turból!

Our design studio has endowed the Vanguard with a sense of grace and elegance that only the British can provide. On the outside, you’ll find styling that’s guaranteed to get you noticed for all the right reasons; on the inside, you’ll find genuine Connolly leather and woodgrain trim assembled by skilled craftsmen, and a premium sound system with an AM radio to keep you entertained on the move.

Powering the Vanguard is our trusty 3.5-litre overhead-cam straight-six, tuned for smooth, economical performance even at motorway speeds. This engine is mated to a 3-speed automatic transmission as standard, with the third gear reserved for overdrive.

Stay tuned for further information regarding the Hampton Motor Group lineup for 1960.

The 1960 model has a 3.8l inline 6 engine upgraded from the previous 3.4l. It offers 153bhp@4500rpm.
Standard specifications are a full leather interior with walnut dash and door cappings. A high end 2 speaker radio is included.

For the 1960 Detroit Auto Show, Gatto Motors has decided to display two updated models and a prototype. May I present you:
The 1960 Gatto Mustache "P2"

HiResPhoto4.jpg3840x2160 874 KB
First launched in 1958, the 1960 Mustache P2-series gets disc brakes in front to upgrade both the safety and the performance of our luxurious GT, an hood scoop for better cooling and, since here at Gatto Motors we always pursue the pinnacle of automotive safety, also an advanced safety pack

HiResPhoto2.jpg3840x2160 1.09 MB
Our small sports car gets not only an update, but also a new special edition, the “Rallye” trim option (created to give people an idea of how it’s like to drive a Gatto rally car). This new version offers the same 2.0L 8v inline-4 of the regular Baffo (that was a tuned version of the same engine used in our NapMaster sedan), that, thanks to new carburetors and pistons, now it’s capable of 104hp@5000rpm and 159Nm@3900rpm. New disc brakes are also standard on the “Rallye”. Also standard are a black front bonnet instead of the regular orange one, a new shade of orange for the exterior paint and auxiliary headlights. Thanks to the removal of the front bumper, the reshape of the rear one and the fact that now the AM radio is an optional, we were able of reducing the overall weight to 947kg (54 less than the regular Baffo)

HiResPhoto3.jpg3840x2160 985 KB
We’re confident that the Baffo will achieve its goal of being the hard-working man or woman’s small coupe of choice.
But last, and definitely not least,
The 1960 Gatto Après Concept

Photo73.jpg1920x1080 179 KB
The Après (“after” in French) is our vision for the future of the performance automotive world, by using technologies that are available today and that can be easily implemented in our production vehicles. It’s powered by an efficient 1.8L 12v inline-4 capable of 82hp@4900rpm and 132Nm@2900rpm mounted in the rear. This efficient but powerful engine is paired with a 4-speed manual transmission, and, also thanks to a fully-aluminium body, the Après can achieve a fuel economy of 10.7L/100km while still being an enjoyable sports car.

HiResPhoto1.jpg3840x2160 674 KB
The car has been painted with a white/red paint scheme, instead of the regular Gatto Orange to recall our national flag, the Swiss flag. The design was heavily inspired by creations such as the DeHavilland Comet, but it’s mainly driven by an extensive aerodynamic research made at the Swiss’ space program wind tunnel in Lucerne.

This high-performance option package is available on all models at extra cost (2-seat coupe, 2+2 coupe and 2-seat convertible) and includes the following mechanical upgrades:

The standard Peregrine, with its 144-horsepower engine, remains available. However, all Peregrines now come with 4-wheel disc brakes as standard.

Our entry-level sports car, the Shrike, has not been neglected either - the standard engine for the Shrike is now a 2.0-litre straight-four developing 90 horsepower. As with the Peregrine, 4-wheel disc brakes are standard across the range. And for the first time ever, the Shrike is available as a convertible, for those who want open-top fun on a tighter budget.

All new for 1960 is the sleek Corsair Mulsanne. It’s unique teardrop shape doesn’t just make it stunning; it was designed for speed in competition against the greatest sports cars in the world on race tracks and motorways across Europe!

This unique body style will only be produced in small numbers, so order yours before they are all spoken for! This limited production model is of course powered by none other than our brand new 420 cubic inch V8, giving this sweet ride a serious bite!

Don’t get one in time? Don’t fret, Corsair Hardtop is still here to stay. While the Mulsanne is only available with the 420 V8, other Corsairs are available with any engine in the Turból lineup, from the fire breathing 420 V8 to the feisty little 183 cubic inch Legion Six that powered the original.

Speaking of originals, we’d be remiss not to mention the original Corsair, Corsair Roadster. There’s no more exciting way to get wind through your hair than in a lithe, lively Corsair Roadster.

Keep your eyes peeled for more exciting updates from Turból!

It’s a big shame not to take part in this, but my PC has decided to brake, and I don’t honestly know when it will come back. Unfortunately I’m not able to show you the car I’ve desgned, although it was nearly ready to be published

I am also regretting that i cannot take part. my Motherboard for my computer decided it didnt want to work properly and then once id got a new MB, cpu and ram, my hard drive decided it didnt want to be a hard drive anymore and that it wanted to be a brick so i had to get a new one and thus all my automation stuff and everything on my harddrive was lost to time, including the two cars id made for this that i was nearly ready to show.

The latest and greatest from Petoskey Motors

Photo22.jpg1920x1080 685 KB
Photo was taken before the show was open to the public, Ventnor Sovereign has been moved at the request of the venue.

Photo17.jpg1920x1080 659 KB
All new for 1960, the Cortino is the perfect sedan for the family on a tight budget. The car is available as a sedan or a station wagon for those long comfortable trips. Engine options include a 230 cubic inch inline six, or a 307 cubic inch V8 for that extra grunt.

Photo16.jpg1920x1080 693 KB
Jump forward to today and we’ve replaced the 2-speed slushbox with a new HydraTorq 3-speed automatic* The 432 V8 is improved with a new 4 barrel carburetor as well as numerous refinements. The 1960 Ventnor Sovereign also features innovative disc-brakes at the front for improved stopping power. Of course it wouldn’t be Ventnor without all the latest luxury refinements available and this generation does not disappoint. With refinement and comfort, the 1960 Sovereign is the ideal vehicle for discerning, cultured motorists like yourselves.

Photo20.jpg1920x1080 759 KB
With the retirement of the HD line, the Stag Series stands as a worthy successor. Base model Stags come with a 261 cubic inch inline six while a 307 V8 is also available. For that extra towing capacity, the Stag HD makes use of the powerful Ventnor 432 V8.

Photo21.jpg1920x1080 632 KB
But perhaps you and your family aren’t satisfied with just a road trip? You secretly yearn to explore the great outdoors, then the Stag Iroquois is for you. With a capable 4WD system, there just about isn’t a place on the planet that the Iroquois cannot reach.

In addition to the HD series, we’re also saying goodbye to the Indian. The staple full-size car that has served the company well for nine years. At the present, Petoskey lacks a full size or mid-range option. New projects are in development, but it is too early to bring them to public attention.

* HydraTorq transmission is also available in the Cortino Police Special.

After much headaching and strong language at Phoenix-Trident’s Yorkshire HQ ,due to the original entrys for the detroit show having been mangled due to an incedent at their holding warehouse, The company had to bring the launch of the Trident Sterling forward to the detroit show 1960 instead of its planned launch in '61 and put back the launch of their Flagship Phoenix range a year.

The Trident Sterling.
Although based on the floorpan of the Enigma MK1 saloon, The Trident Sterling 3500V8 Combines a Smooth 170BHP 3500cc V8 and Luxuriously appointed 4 seat interior with brilliant roadholding and highly styled and handsome bodywork to provide the ultimate in Premium GT refinement. with a Triple Twin-barrel carburettored 3504cc SOHC 2V V8 producing 170BHP and a 4 speed manual transmission, This stylish coupe can get from 0-62mph in just 9.43 seconds and on to a top speed of 117mph. This car also benefits from all round disc brakes and double wishbone suspension along with hydraulically assisted steering so you can keep the Sterling under control without exerting yourself. With enough space for 4 adults and a decent cargo space, this car is perfect for long, lazy weekend getaways with or without friends and family.

The Hampton Valiant range has been updated for 1960.

For 1960, our mid-sized sedan, the Hampton Valiant, will be available in three trim levels:

Supreme - Our new range-topper, powered by a 144-horsepower 3.5-liter straight-six and with a sportier edge for more enthusiastic drivers. Only available as coupe or sedan.

All trims are available with either a 4-speed manual or 3-speed automatic transmission. Please contact your nearest Hampton dealer for pricing and option availability.