This is where I’m posting my car company’s engines! I mention it in the breif description of my company’s thread, but we also make powertrains for engines. This thread is to post the created assets.

I’ll start in 1983 with the F1 engine, first seen in the Farox Cielo and Aerio

The Farox F1 engine was not for racing. In fact, it was developed for the opposite. With fuel-injection appearing on the engine 4 years later in 1987, all engines were carbureted, with 2-Barrel twin carb or Single-Port Fuel Injection setups depending on the variant. 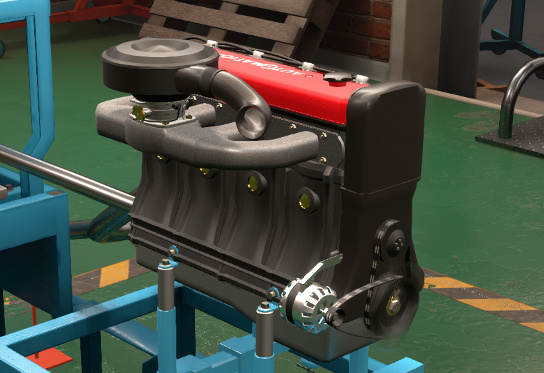 The Farox G6 engine series only offered two engines which were updated year by year until 2002 when it was succeeded by the F9 engine. The G6 sported modest 2.7L and 3.3L units. It lasted for two generations; there was an update in 1995.

The 3.3L Gen I G6F2 was bored and stroked to 3302cc and given a higher redline and more aggressive cam profile. It also utilized hypereutectic pistons to help with emissions. It offered up 175 hp at 5800 rpm and 195 ft-lbs of torque at 3400 rpm.

For the Gen II update, both engines recieved high-tech Multi-Port Fuel Injection, higher compression and higher cam profile. The F1 now produced 165 hp and 170 ft-lbs, and the F2 produced 200 hp and 205 lb-ft, which were very impressive numbers for its time.