Innovation You Can Feel.

The Kadett Motor Company was founded by Choe Dae-sung in 1965 in collaboration with the Sisten Motoring Corporation as a way for Sisten to sell rebadged cars in the Korean market. Kadett’s first model, the 1600E went on sale in 1966 as the rebadged version of the American Sisten Bolide sedan. The car was a success which lead to Kadett branching out to the European market in 1970 with the small Athena sedan. While sales numbers were decent, they were not good enough to the eyes at Sisten and as such, in 1971, they brought in Timothy Parnell as the head of the newly founded Kadett of Europe. Parnell spearheaded the development of the Club supermini and hired Michael Buckingham, who would remain as the head-designer at Kadett until 1997.

The Club would turn out to be a big hit for Kadett in Europe, topping the best-selling car list for Spain in 1977. By the late 70’s however, the Sisten Motoring Corporation was restructuring and in 1978, sold their stakes in Kadett. This was an opportunity for the Korean company to enter the American market, as previously these attempts were rejected by Sisten in order not to bring in more competition from import cars. Ken Yoshi became the president at Kadett of America and helped launch the second generation Club in the US market.

By the 90’s, Kadett was expanding. This was marked by the opening of their second factory in the US and a third factory in Europe, located in Germany. Kadett Motor Company India was established in 1996 and in the same year, once again started a partnership with Sisten with them acquiring 33% of Kadett. By the 90’s, Kadett was attempting to update its image by adding more sports and luxury oriented vehicles into its growing lineup, having previously been occupied mainly by just the Vista sedan. Also within this time, the company opened a research center in the United Kingdom, with bases in Colorado, China and Australia following.

In 2000, a new factory was set up in France, built specifically for the production of the Koroma electric car. Despite slow sales in the beginning, the second generation model became one of the best-selling electric cars in the world and paved the way for Kadett Electric Department, later KERS. The financial crisis of 2007 and near-bankruptcy of the Sisten Motoring Corporation lead to them selling their stake in Kadett for the second time.

It’s been a long time coming, but the brand that made its mark in CSR 106 has finally received its own thread. I can’t wait to see what you have on offer!

Premium sedans. Into the 80’s, this market segment had been dominated by the Americans with luxury cars and the Germans with more performance oriented cars, and the Korean Kadett wanted to step in that market too. Having been set from their ownership by Sisten in 1978, the newly established Kadett of America set to work on a new premium sedan aimed mainly at the American market.

The chosen name was Vista and the sedan went into production in 1984 alongside an ad-campaign emphasizing the cheap price of the car compared to it’s core competition. 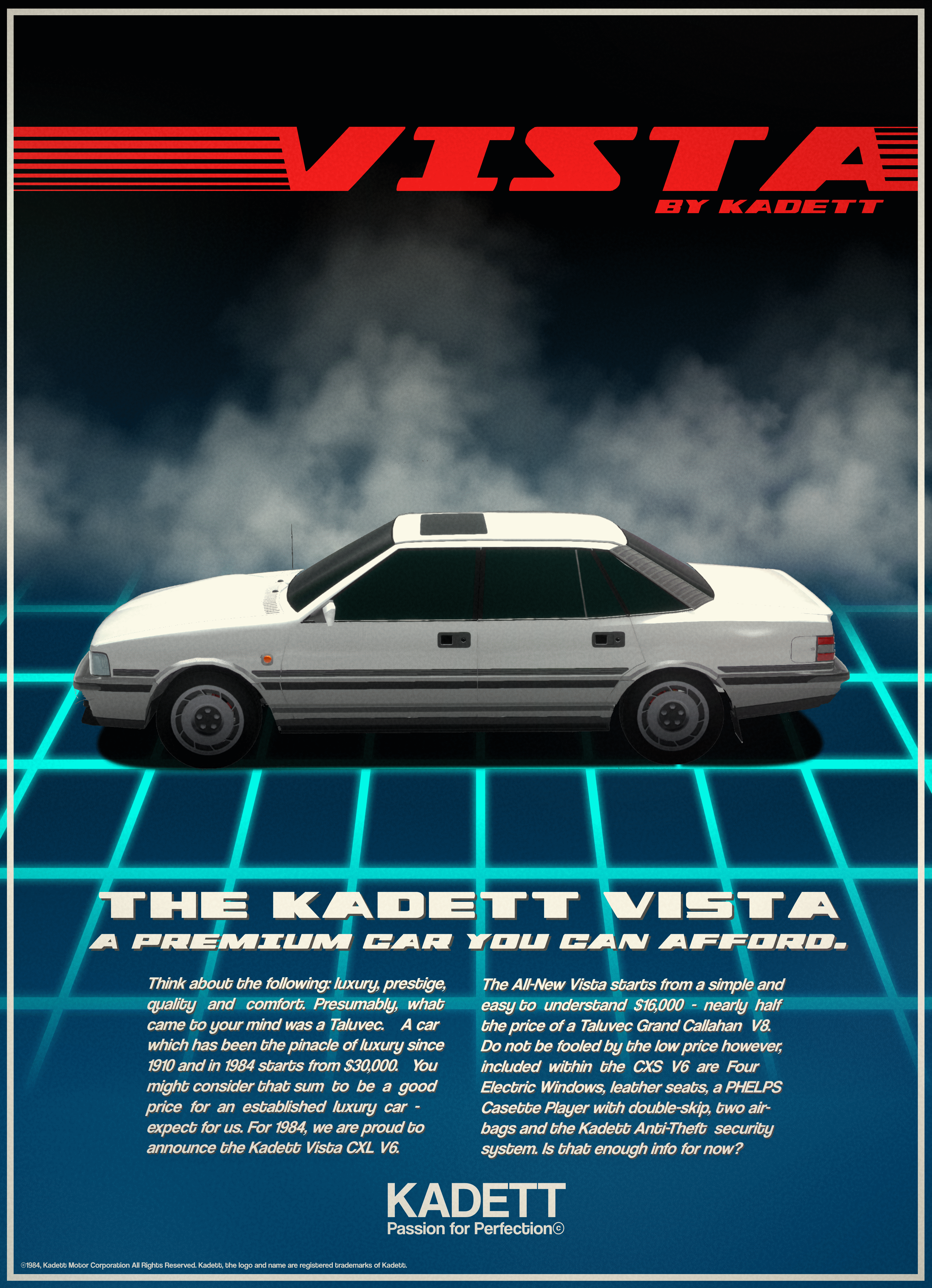 The job of styling was not given to the team of Michael Buckingham and instead to Alfonso Rivera, a famous car stylist from Italy. Rivera was brought in to give the Vista a design which would stand out among the competition - the end result was a sharp, sleek body with multiple instances of asymmetry, a design quirk inspired by many contemporary Italian cars of the era.

Two engines were offered for the first generation model. The smaller option was a 1.6 liter Inline-4 developing 90 horsepower, achieving 0-60 in 14,6 seconds and getting on average 19,3MPG.

The second option was a Sisten 3.0 V6, modified specifically for this model. It developed 174 horsepower and ran from 0 to 60 in 8.8 seconds while achieving 15,5MPG. The V6 ended up being the much more popular engine choice.

Both engines were mated to a 4-speed Automatic gearbox. The I4 was standard on the GXL model, the V6 was an option on the GXL and standard on the higher CXL. The CXL also featured more high-end PHELPS cassette player and 4 electric windows.

The base GXL included hydraulic power steering, dual airbags and an 8-track player. The CXL replaced the 8-track deck with a modern cassette player and added bigger, 16" wheels with white and beige color options becoming available.

Due to the lackluster sales around the world of the first generation model, the second generation was not available in Europe at all making it available only in North America, parts of Asia and Australia.

Development itself started just a few weeks after the first generation model was formally launched to the market. Michael Buckingham became the lead designer for the “CB20”, as it’s known internally. Unlike the original, the design of the second generation became more casual and less striking, with strong influences taken from Japanese cars of the era.

The “CB20” was first shown off in 1989, going on sale later that year. While the critical reaction was good, the follow-up model once again failed to meet sales targets.

This model had one engine for all models - an updated version of the 3.0 V6 from the first generation. Horsepower was bumped up to 179 and torque was increased to 238 Nm. This allowed it to sprint to 60 in 8.7 seconds. Fuel economy was rated at 16,3MPG.

An improvement over the last model was the new Limited Slip Diff., unlike the first generation model which had an open differential. Brakes were also ventilated all-round. The suspension setup however was maintained, with MacPherson Struts up front and a Double Wishbone setup in the rear.

Both of the trim levels returned from the old model. The GXL was the base model, the CXL taking place as the higher-end version. Both also came with a 4-speed automatic gearbox and traction control as standard.

The second generation Kadett Vista would end production in 1994, after years of lackluster sales. A successor would however come out in 2006, under a different name.

I love the '84 Vista. It mostly looks like Made In Japan (Nissan Laurel, Mazda 929) but the doors with those handles look like they’re from a Peugeot 505. Anyway, it’s a very harmonic design.

Interesting that there was a big gap between the base model 1.6 and the top of the line V6.
I think a bigger inline-4, something like a 2.0 or a 2.2 with around 120 bhp could have filled that gap.

From the two available I would choose the 1.6 (all my cars in real life were (and are) with base engines, so I got used to low power

) in white, with dark blue velour interior. I hope central door-locks and power steering was available for the 1.6.

Through the 60s and 70s, Kadett had been a brand focusing on cheaper commuter cars. After the Sisten Motoring Company had sold their stakes in 1978, Kadett started a plan to change and improve their brand image, especially in the US where the Club subcompact was seen as an alternative to taking the bus.

Development of the 1st generation Beat started in 1983 as a replacement for the Concord and intended to be a world car. Special care was taken to make sure this car would be seen as a proper competitor to other contemporary cars in its class. The Beat was designed by Michael Buckingham, with input from Kadett of Europe and Kadett of America.

The Kadett Beat was officially launched in 1986 in Korea, the US and Europe with Australia and New Zealand following in 1987. The car was a hit, quickly becoming the brands best selling car in America. The Beat would stay behind the Mk. II Club in terms of sales in Europe however, launched earlier in 1983. Unlike the Concord, critics were fond of the new car with special notes taken of the interior and handling characteristics.

At launch, 3- and 5-door versions were available. The Sport Coupe liftback was added to the range in 1987, available exclusively with the 1.8l inline-4. The base model 3-door featured a 1.2 liter engine, the mid-trim using a 1.6 and the highest end model having the 1.8.

The Sport Coupe was launched to give a flare of style and sportiness to the Beat name.

In 1988, Kadett launched the GTS sport version. After seeing the popularity of hot hatches throughout the 80s, the executives at Kadett of Europe quickly assembled a team which would be tasked with turning the Beat into a worthy competitor to the likes of the Contendiente Enemigo and Žnoprešk Zest. The team used the top-of-the-line 1.8 I4 engine as a basis, but tuned it for more power. The suspension was stiffened up for better handling and ABS was equipped as standard. With good* reviews from reviewers, the Beat GTS went on sale in early 1988 exclusively as a 3-door model. The GTS was heavily marketed in the US, as an attempt to make give the Beat name a sporty and upmarket feeling. Despite high projections, the GTS did not sell as well as Kadett had been hoping for. 80,000 units were produced until 1992 when the Mk. II Beat was introduced. Today, units of the original Beat GTS are greatly sought after unlike the Mk. II models. The original model also started the GTS model name, which has been used on every Beat model since and has, on occasions also been used on other Kadett models.

“The Beat GTS is not a speed demon or a pocket rocket, but despite the somewhat sluggishly big engine and the old-fashioned underpinnings – a solid rear axle for example – the GTS is responsive and stable on the road.”

All in all, around 3,300,000 units of the Mk. I Beat were produced. Even if the GTS wasn’t a big success, the Beat still became the first success for Kadett in the US and helped shape the entire brand there. The Beat Mk. II was launched in 1992.