Yes, it’s in the Toronado/Eldorado market.

Here’s the Ghia version of the Fiesta i’ve posted.

Here’s a pretty big line up. The Bridgell Horizon was a 50’s premium car, with coupe, sedan and wagon variations. A race version was built for promoting the vehicle, but it didn’t had much success.

Now here, friends, is a lesson on bad business. We were contacted by a korean business group interested in lauching their popular car company with a stylish small sedan. They instisted the “inspiration” should be a certain recent japanese concept car. The problem started with the chosen name of the company, Family Union Company of Korea. And we had to type THAT initials on the car! Afther much debate, they accepted changing it for Lucky United Car Company. Well that was a stupid bean counter idea, but it worked. Also the car’s design was highly critiqued for being too far from the inspiration, even though the package we had to use was completely diferent from the goddammed concept! The car went into production without our badges, by our request. Anyway, try to enjoy it.

Recently @Obfuscious made a very special version of my Barstow. Check his thread, there’s a demo video there. 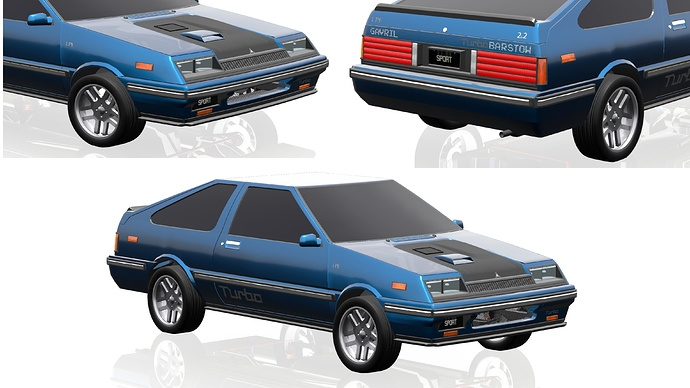 In 1980, Lagerfelter Performance Engineering (LPE) was contracted by MV Designs to provide development work on the 1982 Gavril Barstow H/R (Highway/Race), a limited production (1500 units), high performance variant of the Barstow. LPE has a long history of sports and racing cars, but much of their income actually comes from doing development work and engineering for other manufacturers. Visually, the H/R can be distinguished by subtle badging, a larger wheel and tire package, and a small cold air intake scoop on the hood. Under the skin, the standard drive and suspension layout have been retained but a number of subtle changes have been made. The engine has been destroked to 2.2L, fitted with a twin cam 16v head developed and manufactured by LPE, and now requires 95 octane fuel. The new Turbo III engine features forged engine internals, and produces 225 hp. A 5 speed with ratios exclusive to this variant gets the car up on boost more quickly, and also features a geared LSD. Brakes feature aggressive race-capable pads, and improved cooling via larger ductwork. New suspension tuning is actually softer than the standard models, reflecting lessons learned in rally racing, and offers improved performance on rough roads and mixed surfaces. The new setup, rather than chasing the last tenth of a second off lap times, is engineered for driving enjoyment. The result is a chassis that can be steered with the throttle through a corner, yet remains supple and sane enough for daily use. Criticised by some as having too much oversteer, it is a car for the discerning driver. In capable hands, this 2007 lb rocket is a giant killer; entertaining and involving to drive near the limit, it requires a bit of finesse to achieve its full potential.

The horizon kinda reminds me of a 3.0 CSL

The race version was based on the CSL Batmobile.

Ever wondered what the Civetta Bolide would look like in 1955? Me neither. Now go drive it.

The Popular was a project created for some comrades over the East Fruinian border in the 60s. The body used a cheap brought mould from another factory’s outdated model, that’s why it looks old. And it was made from Duraplast, a type of FRP. There was only the bare minimum for driving, including a single center tail light. It was powered by a 600cc engine with no power, but enought to power the light (and unsafe) car though the communist provincies.

There was also a small truck based on it, and as basic as the passenger car is.

It Lasted until the 90s, when @Echowaffle8 's Humanoidsautomobile brought the facility to produce it’s own parts. The last run was equipped with a 700cc EFI engine and some improvements, but that wasn’t enought to keep interest over it.

The Raven was a brazilian fiberglass sports car, making use of the famous italian “Musso” V6 powertrain. Though very fast and sporty, the manufacturer of the italian powertrain decided to leave Brazil, forcing the small factory on using much less desired and less powerful I4s from the german manufacturer. This made the sales drop, ending the model’s run. Since the V6 required expert maintence, it’s a rare sight nowadays.

During the Turbo Bartow’s lifespan, a racing prototype was built by Gavril. It used a extremely tuned version of the street car’s engine, and the body tried to emulate it’s visuals. It never had much sucess, but is remembered by it’s looks.

I’ve made myself a version. It’s more grip focused.

Here’s a look at the future for the Bravado Buffalo. This is a 2020 design study packaged over a capable GT. Try it out! 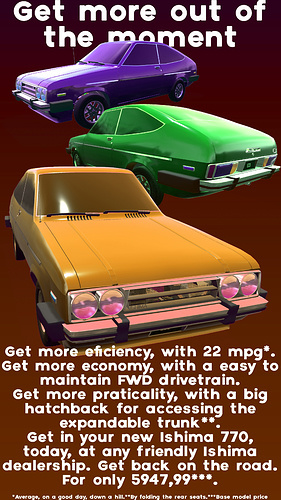 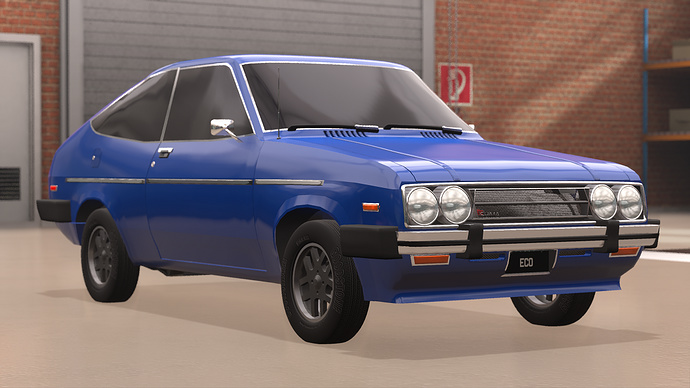 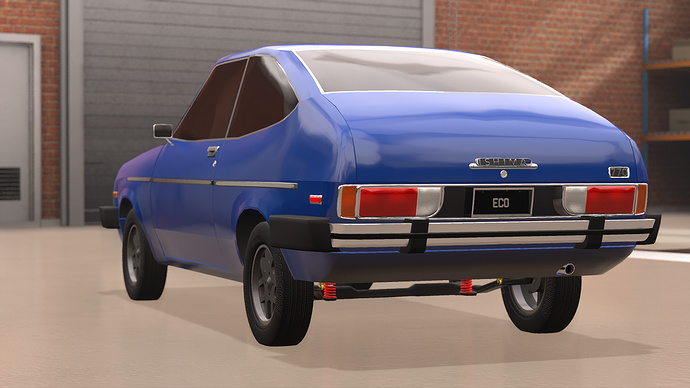 looks like a Ford escort MK2 or a Toyota corola KE 30 series coupe.

I like to download cars, so in a sheet excell I write statistics and mechanical data, so I can compare them to mine. I like this car, both in line, elegant, snobby, and in its performance. Although my PC is obsolete, driving it in Beam makes you feel a bit like James Bond, and what about the interior made by hand ?? fantastic!. or the sound of the V12? .gran beautiful Hyper Car! Good job!

Aw man, it makes me feel glad that I’m not the only person lifting company names from Street Legal (here and in your ad thread)

And this one looks like the one my father had, minus the big rust roles.