By which I mean: When I placed the fixtures around the tailfins, it broken out (not perfectly flat surfaces).

I had my UV mappings properly assigned in the .lua, but the problem was emerged on the tailfins.

That particular issue is caused by the UV mapping in 3DS max, not lua stuff.

If the fixtures makes a hole for itself, the lua is usually fine. In your case the issue is that it makes holes where it shouldn’t.

When you do the UVW mapping and verify what it looks like to make sure everything is within the bounds of the thing, also make sure that you do not have polygons which are mapped in front of each other. In many cases you can prevent it by orienting the projection differently.

I’d recommend looking at maffc’s previous post in this thread.

Everything seems to be in the bounds, but I still think there are polygons mapped on top of each other (which is what maffc and Trackpaduser were saying)

If you click ‘Open UV editor’ when unwrapping, you’ll see if that’s the case or not.

Problems still shown (now with new images, note: I can solve the poked radiator later, as it is .lua-based), despite I had those bumpers hidden during UVW Mapping, and I even followed the tutorial, plus 45-degree mapping.

If you like, you can pm me your max files and I’d be willing to have a look this weekend and see if it can see what’s up

During last day, the Discourse server went down, so I also exported the Skyline R32s to the 3ds Max. The results are: no mapping problems, but I may had to adjust the .lua files for the fixtures and car’s position.
For the NSX, it works fine, although I encountered a problem on the rear boot/trunk, despite correct material orders. So I will send my files to maffc after I had the year-end party. 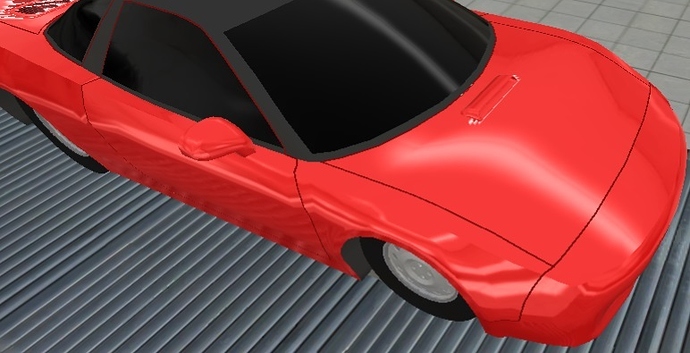 No worries, have a great new years

Thank you maffc, and Happy New Year 2017 from Thailand (as my timezone: UTC+7 is now 12:20 AM, however, Europe is still around 4:20-8:20 PM, but Sydney and Melbourne are now 4:20 AM, and New Zealand is now 6:20 AM) Note: Those times are the times that I posted.
Modeling Update: I will send my NSX (after I adjusted the position and added the targa top variant) and Thunderbolt to maffc, before I get to sleep. Those cars (including the previous cars I did, were the last cars to be developed in 2016) will be the first cars released in 2017. (if the progress goes well, after he solved the stamping problems, then, I will call the other modders to set the morphing values and resize the boxes, as I already created the morphing zones and boxes.)

I finally adjusted my Skyline R32, with a demo to promote my upcoming car.

Performance and Comfort at an affordable price, thanks to the wheelbase stretched to 2749 mm (108.2 in), but still compliant with 5-Number “Compact” dimensions as I said previously, and 2.0 liter engine with forced induction (based in Japan, while other countries measures just engine displacement above 2 liters as a tax threshold, but it was replaced by CO2 emissions today).
My demo car comes with 2.0 liter turbo engine, it has 221 hp (165 kW) and 245 Nm (180 lb-ft) of torque, with top speed of 241 km/h (150 mph).

It’s a 2-liter turbo, but does it have four cylinders or six? And is it rear- or all-wheel-drive?

It has straight-six cylinder engine, and standard rear-wheel-drive (all-wheel drive is optional, and I will do the 2.6 variant with AWD after I exported the fixed NSX).

Of course, I will include it as a part of Unreal Engine 4 revamp (NSX, Thunderbolt and Skyline R32 are the first cars I will send to the dev, after I released those cars for a while. After that, I will revamp Tagora and Scorpio again). Thank you to maffc for solving those bugs on NSX and Thunderbolt. By this stage, all three cars are ready to skinning, so I will allow the other modders to play the morphing zone values, resize the hidden boxes, making thumbnails and edit the .lua body boxes values (while I will adjust the rest, such as Drag and Lift).
I also tested to install the headlights on the NSX, as the car looks very sleek, so I had to adjust the front hood several times to test. The results are: most headlights works fine, but it can’t be large in some variants.
For the Skyline R32, I had set those morphing zones up to 14 zones (13 in wagon variant), which will be the highly versatile late 80s car to morph like Partario’s 70s American Full-Size Car, however, I forgot to add the upper rear zone, so I will also allow the modder to add one more zone on all variants, so it will have 15 zones (14 in wagon variant).

Re-Announcement.
Guys, could you skin the morphing zones values (I had set those hidden zones, although you can add one more on the upper rear zone for the Skyline R32), resize the hidden boxes, making thumbnails and edit the .lua body boxes values for me before I upload, please?
General Information: The Thunderbolt will be available from 1951 due to the Monocoque chassis availability, while the Skyline R32 and NSX will be available from 1984 and 1986 respectively.

8/1/2017 Update: I’m now in my hometown for several days. However, I apologize for unable to release those three cars by 8th January, and I had to go back to the university by 9th January. However, during 2-3 first weeks of the semester, I still have time to upload those cars. For the other modders: you can do the skinning, resize the hidden boxes, edit .lua boxes values and making thumbnails, if you guys have enough spare time. After I uploaded those cars, I will back to revamp my early cars (Talbot Tagora and Ford Scorpio) again, because I had lost my original files in the old and now unworking thumb drive.

14th January Update (12:50 AM): I’m now in the University, and the new Semester had been started 5 days ago. However, I have now decided that I will not upload those cars to Steam Workshop anymore until the game changed to UE4 engine, but I will send all of my cars to the devs to include it as a part of UE4 revamp instead, so I’m sorry about that, but don’t worry, you guys still have chance to use my cars after the game changed to UE4 engine.
I also re-modeled both Talbot Tagora and Ford Scorpio again, along with the remodeled side mirrors, due to the loss of my original files in the old and no longer worked thumb drive. (both works are in progress, but I guarantee the higher realisticness, because I used high-resolution real-life images or 360 view of those cars).
After I saw the new Little Dev Update, I will talk to the devs to include all of my cars to finish (just skinning, resize the hidden boxes, edit .lua values and making thumbnails).