THE AMERICAN LEGION ARRIVES AT THEIR WAREHOUSE

Adam and Carrie looked around as Darren pulled the old Durendal into the parking lot of a rather decrepit building.

Carrie: “Darren, is this really the building your Uncle Johnny rented for us?”

Darren: “Shut up… at least it’s somewhere to get ready.”

Adam: “I didn’t say anything…”

Carrie: “…You guys aren’t going to leave me here alone, are you?”

Darren: “What?! You’re the one who’s gonna be scaring the crackheads away from us!”

As Darren erupted into laughter over his own joke, Adam shook his head in disappointment. He then turned to the back seat to offer Carrie an apologetic glance.

Carrie responded with a dismissive shoulder shrug. She had heard worse, but she was surprised at how nice it felt that someone was actually concerned with her feelings. After about five seconds, both Adam and Carrie realized that they were still looking at each other and turned away.

All three were resting before the race started. Carrie was in the back seat of the car, while Darren and Adam found spots in the warehouse to rest. Darren jumped up when his tablet buzzed with an SMS notice.

Adam and Carrie sat up, chuckling.

Adam: “Calm down, buddy. I’m sure she winks at everyone like that.”

Darren: “Dude, shut up. The race is starting!”

As Adam let out another chuckle, Darren looked at the tablet.

Darren: “What the hell? It’s just a bunch of numbers!”

Adam took out his phone, and in a couple seconds came up with an address.

Adam: “Oh, dude it’s only ten minutes away. We ready?”

Carrie: “We got plenty of snacks and stuff. The car’s all gassed up, right?”

Darren: “Let’s do this… where are we going, Mr. Navigator?”

Adam: “We’re just taking the 817 all the way up to Honey Hill Drive, turning left and just past the Rec Center. Ten minutes tops.”

@Police Scanner
“Officer’s be advised, we just received a call of possible street racers heading Northeast in Medley. Units be on the lookout, suspect is driving a orange RCN.”

It was definitely a sight to see a fully-fleged rally car drive through the streets of Miami, no less sitting on the distinct white and yellow British licence plates. The low rumble of the 1.6L turbo inline 4 engine from a modern WRC rally car echoing off the buldings surround them.

“Left here… Take this next junction…” Came calls over the in-car radio, a lovely brunette directing her red-head driver towards the start location. Appearing on their left was the Hard Rock Stadium, and a large Walmart superstore close by.

Flicking on the right indicator, the driver signalled to exit the highway, taking the exit down onto the road in front of the stadium.

“I suppose we wait for our first set of co-ordinates?” The driver spoke to her navigator.
“Yeah. They should be appearing on my tablet any second now…” The brunette studiously had her head looking down at her lap, eyes focused on the tablet as she waited for the co-ordiantes to come in.

A ping soon sounded form the tablet.
“Got them!” The brunette starts inputting the co-ordinates into the phone she had suction cupped to the dashboard. “Main checkpoint looks to be the Atlanta Mercedes Stadium. Not sure about the bonus.”

“Lets get that bonus first.” The driver smirked and pulled away, the brunette setting a route for the bonus checkpoint.


It was a quiet night on this particular stretch of highway. The warm and humid Florida weather settling about as few cars waved by on the highway.

Up ahead in the distance however, two dazzling lights were ablaze, going through at high speeds.
It was before the everyone else had gotten prepared, and these early birds were going at it before any proper police interference would start bogging the race down.

The car in the lead for now, a cherry red 1969 Quezon Laguna GT-M, and following closely behind it is a black 2020 Tanaka Akuma. Both cars blazing through the freeway at over 170 miles per.
The Laguna’s driver looks towards the planned exit, and still keeping his foot hard on the pedal sees the opening and guns it. The Tanaka’s Twin Turbo V8 revs to almost 8,000 as the driver follows along.

A 2020 Kaizen SC57s awaits at a constant 70 mph on the I-595, they’ve just entered the Interstate from the same exit as the two earlier. The driver spots the pair of twin headlights as they get closer and closer.

“Could this by any chance be two competitors?”
One of the passengers asks.
“That sounds like a massive V8.”

And as they speak the Laguna whizzes past at over 8,500 RPM, nearing its Redline with the driver ready to upshift, following it is the black Akuma. Both cars blazing at 190 miles per hour.
The driver of the red Kaizen determines the road and the car’s condition and seeing there’s no traffic, he pins his foot to the floor as the prototype sedan begins climbing towards its 203-mph top speed.
The driver of the Laguna, noticing the red sedan starting to approach, lets his foot deeper into the pedal, edging towards its top speed even more as the supercharged V8 lets out a deathly growl and whine. Its rear occasionally jerking about as the rear tyres struggle for grip. 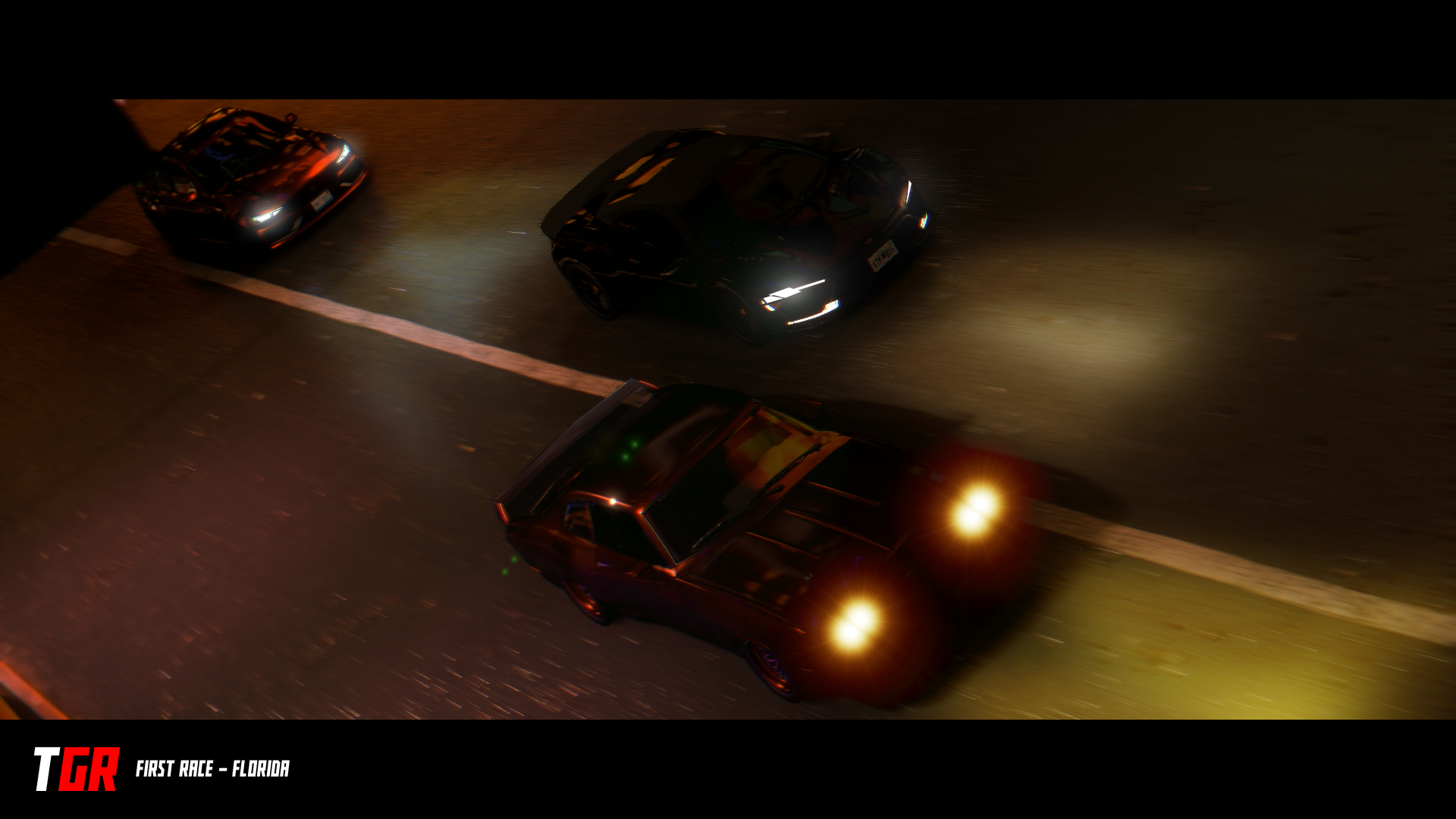 Both the Laguna and the Akuma slowly start widening the gap between the Kaizen, but in a burst of energy, the twin turbos on the black Hypercar start spooling up and the car boosts itself to almost 220. The driver of the red Laguna, unable to keep up due to the car’s shaky nature, backs down and slows to below 200.

“Looks like the Japanese won.”
The driver of the Kaizen observes the Akuma as it passes the red pony.
“I don’t know how a 60 year old car can go over 200 mph.”

With that, the red Kaizen slows down to 70 mph.
“Well that was the fastest I’ve ever gone.”
The driver says as he changes lanes.

*Not the actual representation of what happened during the RP session, this was cleaned up and some more flavour text was added to spice up the writing and to make it less painful to read.

FOR THE LIST OF CHARACTERS AND TEAMS, PLEASE REFER TO THIS SPREADSHEET:

On a normal working day during “lunch rush hour”…the day was sunny, the weather was clear if a bit warm, and the roads were dry and in reasonably good condition.

NOTE: This was written to be as faithful to the original rp as possible. A more “fun to read” version should be coming soon.

The Warlords waited for the countdown timer to reach zero. As the seconds ticked away, there was only one thing on their mind: finding a way to get to the first checkpoint in Atlanta without being eliminated. Finally, after hours of anxious waiting, it came - and the Warlords floored it away from the starting line.

Right from the start, Dave was making rapid progress; he could feel the effects of all the modifications Rick had made to his car. As he accelerated further into the night, he maintained his vigilance, knowing that a single mistake could be fatal. Some time later, heading north on a mostly deserted freeway, his police scanner picked up a transmission from the local police:

“Be advised, reports of street racing in the area, all available units please investigate.”

Immediately Dave reduced his speed to just barely above the legal limit, to reduce suspicion. “Seems like my suggestion of fitting a police scanner was right after all!” Ben told Dave. To which he answered: “Exactly. This could be a potential life-saver if the cops grow suspicious of us.” With that, he carried on driving deep into the night, with Ben serving as his co-pilot, while his teammates nodded off in the back seat.

Meanwhile, some of the Warlords’ rivals were engaged in a heated battle at similarly high speeds. There was plenty of maneuvering during this exchange of positions, until one of them built up a sizable lead and blasted away into the distance. Realizing the futility of keeping up with the car ahead of them, one of the crews slowed down, mindful of the possibility of being ticketed for speeding. This was an intense way to begin the Grunge Run - but there was still plenty of driving to be done over the next few days.

A few days and hundreds of miles of intense racing later…

The Warlords had made it to the Midwest against all odds. Having managed to avoid elimination by any known means, they could not believe that they were still in the race. By the time they got to the bonus checkpoint at the World of Fun in Kansas, they were in an optimistic mood. It was then that the following conversation occurred:

Dave: So far so good, but our task is only half-finished.

Ben: Which means I have to keep one eye on the road and another on an electronic map until this thing is over.

John: Especially with that police scanner of yours keeping us aware of what local law enforcement is doing.

Rick: And with our car in good working order, we should not have too much trouble on the way to the next checkpoint.

And so the Warlords resumed their journey to the next checkpoint, confident in their car’s abilities, but still as wary as they had ever been of the possibility of impending disaster.