My team named themselves “The American Legion” because of how their car smells inside. The car? Darren’s grandmother’s old Durendal Gladius:

It only looks slow on the outside…

Touring entered a car themselves,

This is what my team, the Warlords, will be entering in the Grunge Run:

This MAD Gazelle 4.0 GTS-R has been modified with a high-performance turbo kit, but looks mostly stock.

sweet, be sure to fill out the team sheets also when you send it.

Oh no, team Hillbilly Rollers are unfortunately back in bussiness.

No it doesn’t. Somehow a 2008 IP Bolero ended up in a local pick-n-pull yard which lead to it donating lots of technology, like the rear diff, braking system, ECU and because of that also traction control and ABS. Somehow a IP 8VK crate engine, the TURBO version to make it even worse, got in their hands after playing poker very drunk. Gasmean Racing TS wheels with sticky rubber needed some work on the fenders to fit. A brush painted grey primer is covering the hodge-podge bodywork and as usual when it comes to our friends, the car is a mess. But it works. At least we hope so.

because a highschool for racing/rallying totally makes sense amirite 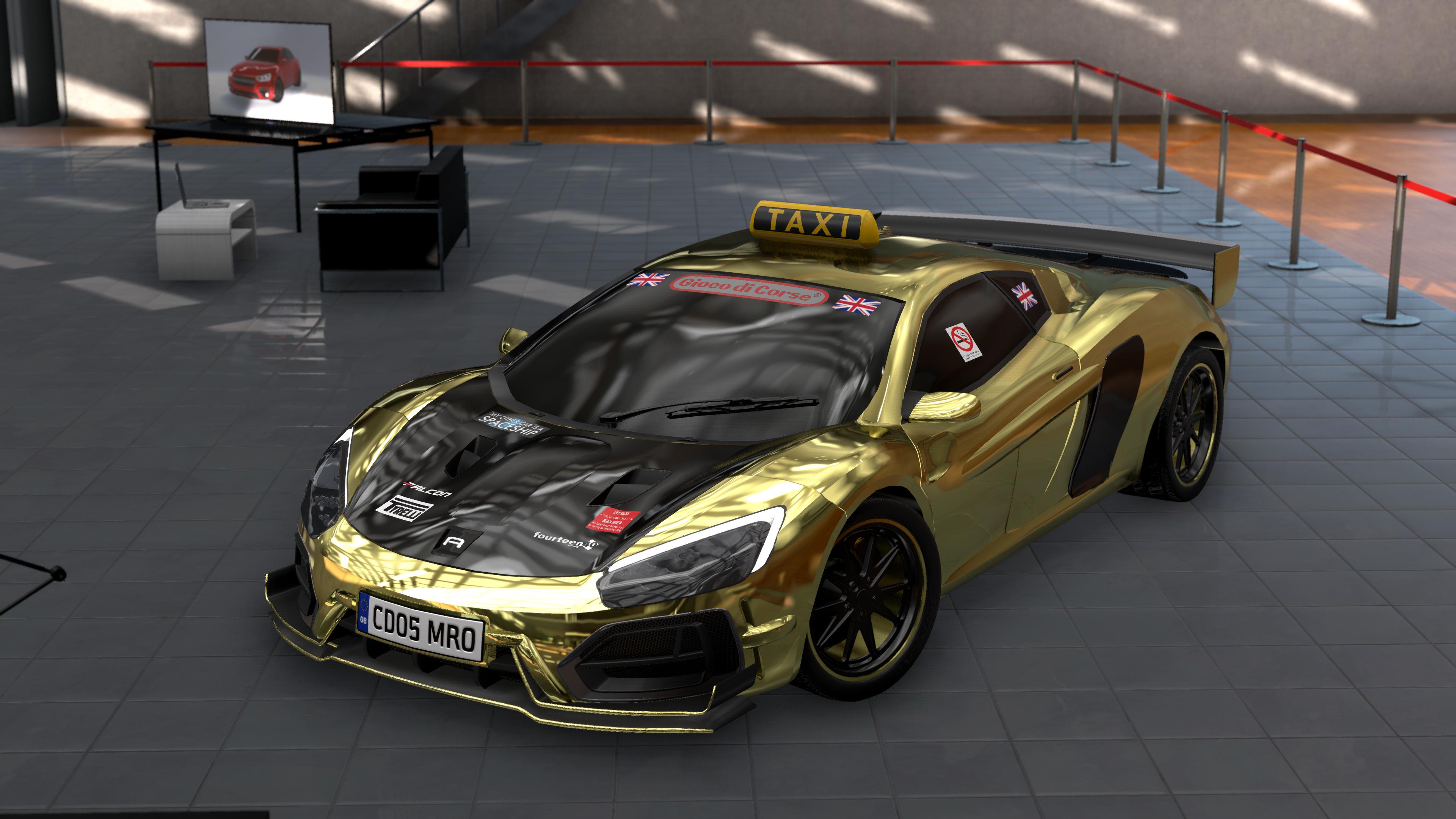 LondonSpeed TV is created on 2015 by known Youtuber Ali bin Ibrahim Al Riyyad, whose content is majorly composited of supercar vlogs and other related content.

SUBSCRIBE TO LONDONSPEED TV AND IF WE GET 10M FOLLOWERS FIRST WE WILL HAVE A GIVEAWAY WITH PRIZES WORTH MORE THAN A MILLION POUNDS!!! THIS MESSAGE IS SPONSORED BY RAYCON EARBUDS, AKA THE BEST EARBUDS IN THE WORLD!!! USE THIS CODE “MONEY” TO GET 50% OFF FOR YOUR NEXT EARBUDS PURCHASE!!!

So for now those who are validated feel free to RP your setup until the Race Start. The start for the Grunge Run will be https://www.timeanddate.com/countdown/fight?iso=20201005T16&p0=137&msg=Grunge+Run+Start&font=serif&csz=1

You want some lore?

You’re getting the bare minimum!

I mean, what else would a Yorkshireman do while tinkering with an engine?

Big John (Yes that’s what I’m calling him): This beauty’s worth it’s weight in gold, t’Cossackworth lot has done a proper job, aye? 200 horse outta this tiny thing?
Macauley: It’s a lot for a 1960s car, where your mind’s stuck… think of the pushrods, it’ll bring you back up to date.
Big John: Nah, I’d rather think about t’brew am havin’.

Told you you’d get bare minimum.

I’m here, just to remind you that I wasn’t on the list posted. Thanks.

Due to some technical difficulties on my end. I may have to delay the race start until next week as I need to fix my computer software. Windows 10 doesn’t want to work for me so I’m trying a fresh reinstall and clearing everything. Apologies. Alright alright alright
Let us try this again
now that my computer is up and running again we will start this event
putting the time to race start
https://www.timeanddate.com/countdown/fight?iso=20201009T22&p0=137&msg=TGR+RACE+START&font=serif&csz=1

Emelia: Yes, it’s a 2020 Tanaka Akuma.
Aaron: Wait how?! This just got released earlier this year…
Emelia: Yes I know.
Aaron: What did you buy this for?
Emelia: Listen, you and I need money. These times are tough and businesses are shutting down.
Aaron: Then how’d you get this then…

Emelia then hands her phone to Aaron with the message on the screen.

Aaron: A race? Listen, I’ve quite racing for some time now.
Emelia: Don’t you want to relive the past again?
Aaron: It’s dangerous…
Emelia: No. Listen, it’s going to be an experience. We never raced cross-country.
Aaron: With this?!
Emelia: Yes. Why?
Aaron: Do you know how much these things are?! It’s probably over $150k. Others will be using a modified car. How come we use a literally brand new bone stock supercar?!
Emelia: It’s a used one, and its slightly tuned as well. Anyways, if we win, we’ll have a 50/50 split on our reward.
Aaron: How much is the reward?
Emelia: Look at the message…
Aaron: $2.5 million?!?!!?!
Emelia: This could be our escape from our rough lives…

It was a calm night in Miami, with hardly anything going on outside. Having just paid the entrance fee, Dave Reid and his ever-loyal cronies trundled slowly into a garage in his modified Gazelle, before getting out to discuss the details about their next adventure.

Dave: So here’s the deal. We’ll be racing flat-out across this country, from Miami to Seattle, in an outlaw road race called the Grunge Run, for a grand prize of $2.5 million - and I’ll be doing it this car of mine. We don’t care one bit about the prize; we’re just here to have fun along the way - and go as far as we can.

Ben: To say that the route for the race is long and challenging would be an understatement. Fortunately, I’m a skilled navigator, with plenty of experience in precision driving - which means we should have little trouble finding the fastest way to the next checkpoint.

Jonathan: So far so good. Is there anything about our set of wheels that makes it… Erm, a bit more special?

Rick: Big turbo kit, good for 715 horsepower at the crank, plus high-performance suspension, tires and brakes - all 100% 50-state street-legal. I even splashed some cash on a custom luxury interior and sound system for added comfort.

Rick: I thought about adding a radar jammer, but considering that some jurisdictions explicitly ban its use, I went for a police scanner instead, just so that we’ll more easily know what the cops are doing. And with so much power coming out of the engine, I played it safe and forewent a nitrous oxide system in favor of a toolbox.

Ben: That’s our ride pretty much sorted, then. It may look like just another luxury sedan on the outside, but it’s a monster on the inside - and nobody likes to fight a monster, right? Especially one that doesn’t look too threatening at first glance.

Jonathan: Many of our rivals have chosen to enter a similar type of car to our own. Not all of our opponents are running four-door sedans, though. Some of them are taking off-road trucks or SUVs while others have gone for high-performance sports cars, supercars or even hypercars. The former two vehicle types are supposedly better equipped to handle rough terrain, but are generally slower; the other three are more likely to attract the attention of the law, but tend to be fast and agile enough to get away more easily.

Ben: There’s also third option available to entrants - restomodded classic cars with modern performance upgrades, and even a fourth one in the form of rally cars, which are basically off-road sports cars. However, we’ve stuck with the sleeper approach for stealth’s sake.

Rick: I like that approach more than any other - and with luck, it should carry us to victory, or at least a place in the final leg.

Dave: I take that as a definite “yes”, then.

And so the four Warlords retreated to the bedroom upstairs to get some well-deserved rest before embarking on what would be the ride of their lives.

*THE TABLETS RINGS WITH A NOTIFICATION, AN SMS MESSAGE FROM AMAYA.

“Greetings everyone, yours truly here! It’s been a few days but all 50 teams are set and ready for the start of this season’s Grunge Run. All of you are aware that a timer has appeared on your tablets counting down to the start. When the clock hits 0:00, it is go time. For now I will drop the first set of digits for you to coordinate your way to the start, once you cross you will receive 2 digits for the main checkpoint in Atlanta and the other is the bonus checkpoint. The first 3 to cross the bonus will be rewarded. Also don’t sight see too much or go to Disney World, because the last 5 to reach Atlanta will be eliminated. But to all the teams, Good luck to you and see you on the road. Chao Now!”

Good Day to you Miami. You’re listening to KRUZ radio, Miami’s number one station where we play what we want. Now here is the Weather and Traffic report brought to you by Falcon Tires. Falcon, Perform With Confidence.

“Good day Miami, this is Valerie with your updated traffic and weather report. Tonight traffic is moving steadily while beaches are filled with travelling tourists for spring break vacation, so expect some moderate to heavy traffic near the beaches. Remember to always drive safe out there.
Weather tonight, clear skies with winds up to 10mph and will continue through the night.
This is Valerie with your updated traffic and weather. Back to the studio, you’re listening to KRUZ fm, where we play what we want.”
[10:00 PM]
“Thank you Valerie, now for the next block of tunes we’re taking you back to Miami in the 1980s this song came from one of my favorites so we’ll play that now. You’re listening to KRUZ radio.”

9:30pm. The tablet rings with a notification

Emelia: The Grunge Run is starting, I already packed the car with everything we need. That’s the starting line! Let’s go to there before its starts!

drives out and speeds through the streets of Miami

10:00pm. They arrived at the starting the line and The Grunge Run begins…

Since a lot have happened in two years, I guess I have to introduce most of you to TEAM HILLBILLY ROLLERS again, the pride of Torne river valley…

The skilled driver of the bunch. At least according to himself. And that’s probably not a lie. Sometimes he actually has managed to complete a race at the folkrace track with his Everette Ellston without the whole car breaking apart.

JANNE MÄKITALO
Age: 42
Interests: Drinking moonshine, making inventions that is completely useless out of scrap he finds in his backyard.
Personal vehicles: 1960 IP Royalist hearse, 1982 Datsun Bluebird diesel, 1985 Deer and hunt Fallow, and too many tractors, dirtbikes, mopeds, snowmobiles, lawnmowers and forklifts to even count.
Personal motto: “If it can’t be fixed with duct tape, it’s broken for real”.

The skilled mechanic of the bunch. He can repair anything you put in his hands. Just don’t be so sure about when you will get it back.

The one with the eye for aesthetics. She can make anything look better with a brush in her hand. At least until she tries to eat the paint. And don’t disagree on that point, she will get a little bit…violent, then.

SO, I GUESS THAT IT IS TIME TO LET THIS STORY START THEN…

ANDREAS: So, how the f**k did we end up in the USA driving around in this piece of junk? I can’t understand anything.
MARIE: Yet another of Janne’s stupid ideas I guess, it is not exactly the first time we are fooled into some stupid race in a shitbox.
JANNE: Why do you call this a shitbox? It looks like a real car and not like a blob of plastic, yet it drives almost like a new Bolero, can it get any better? What’s the problem?
MARIE: The problem is that you f*king stick welded and duct taped this thing together, it will fall apart before we reach the start I guess.
ANDREAS: Yeah, and I am driving around here without knowing where the start is, we will probably end up in Mexico or something.
JANNE: I gave you the coordinates!
ANDREAS: What do I know about coordinates? It’s just some goddamned numbers no sane person can understand!

After lots of arguing, the grey Vagant somehow arrived at the start in one piece…