Welcome to the first edition of the Great Archanian Trek

What is the Great Archanian Trek?

The great Archanian Trek is an offroad endurance rally open to amateur and professional drivers. The terrain is tough but not unpassable, so the race is open for slightly modified production vehicles. Rather than speed, durability and drivability will play a serious role in who finishes in the least time. For this first edition, 5 stages between ~200 and ~600 kilometer (~120 to 370 miles) are planned.

A random selection of sectors (5-10) from different tracks (to be communciated) will be used to simulate a route / stage. The total time will be transposed to hours. For example, in a test race, 5 sectors gave me a time 5 minutes and 05 seconds. This becomes 5 hours and 5 minutes (“stage time”).

(Every car gets to do the same sectors, but when calculating distance, we role play this:)
The terrain we follow is very diverse, which means people can take different routes and their total distance per stage travelled can differ. We take your “stage time” mentioned above and take your average speed over this offroad route to calculate the distance you traveled. Your average speed over the tricky off-road stage will be the average speed of your car on Airfield Track divided by two.

Now to that “stage time” extra time can be added:

every car gets a 35 liter fuel tank, your vehicle carries additional fuel (and must be able to carry at least 400kg in terms of cargo). Every stop to refuel takes 5 minutes.

Fuel consumption is taken from the detail stats/fuel economy tab; the cruise tests + acceleration tests for the speed closest to your average speed.

After each sector a random throw 1-1000 is done to simulate mechnical issues. If your reliability is for example 60.0, every number from 1 to and including 600 means your car moves on to the next sector without losing time.

This is like a card game within the same stage, meaning if in a sector you get a minor issue, it carries over to the next sector. If you role a bad dice there, you are immediately at significant mechnical issue.

For catastrophic and propbably dead carrying over, you get a saving throw (so you need to get two bad rolls in a row).

3. Drivability, calculated as drivability + offroad - every point of comfort under 15.

Only one roll here at the point of “stage time”, same methodology. If you roll higher than the number above, you get a 30 minute penalty because you had serious issues that stage (got stuck one or multiple times, evaded a camel and got in a ditch, etc…).

All the above penalties added to your “stage time” makes your “total time” for the stage.

(Even a light rear engined sports car with offroad tires and rear coil springs does the job, or go big with a big offroad truck or pickup, or adapt a standard sedan or muscle car in your lore. Be creative!)

Introduce your car below, as well as your driver, co-driver and team (amateur or professional).

PM me the exported car file:

Some examples of the cars I aim for 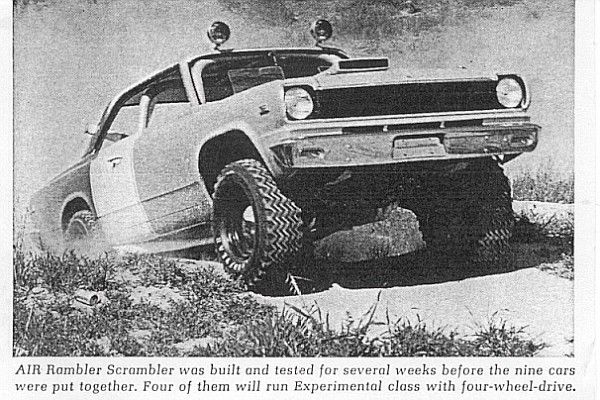 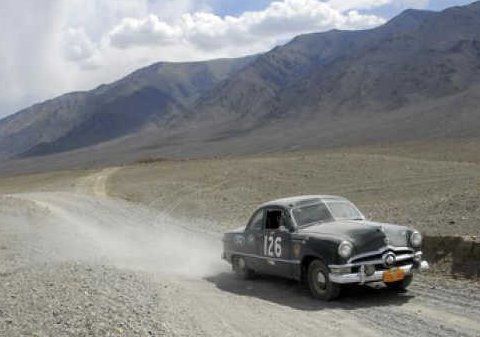 Sounds very interesting, I’ll see what I can come up with!

I may have an idea or two I could work with. 1966… Let’s go see what bodies we have to experiment on.

Well, I’ve got a very rough idea of my plan, and the body all done up. Nothing like modifying a lore car, and in lore, a concept car, to be a rally car.

I almost guarantee there won’t be another muscle-car quite like it in this challenge, and that’s because this is lore-friendly. Some of you know a bit of Sinistra from elsewhere in the forum, and thereby know exactly what difficulty I’ll be facing in this. For those who don’t know, well, I’m not telling until later on, when Race Day shows up. For those who do know, please, grin quietly and enjoy knowing I’ve got last place likely covered.

Oooh, that’s different.
And I think I do have a car able to enter, gonna look it up this evening!

Cossack TT series was introduced in 1958, when it was decided that the 1200TT, based on a family and not being a car designed from the ground up to be an off-roader, needed a proper successor that was not based on the next generation of Cossack family or city cars. I mean, that would’ve been fine, but Cossack Motors was planning on switching to unibody chassis construction which would not have been suited to off-roading at all.

Now, offroad vehicles don’t age as quickly as normal cars, which is why, in 1966, Cossack management settled on face-lifting the TT series instead of creating a new car altogether. Round lights gave way to rectangular ones. (That would never fly in America, would it? It’s a good thing it’s a European car.) The grille was replaced with what would later become the signature Cossack grille. A lot of minor improvements were made to make the car catch up with the time.

This particular TT is powered by a 2.5 liter B25U-66 engine, developing 63.1 kW (84.6 hp) of power, coupled with a 4-speed manual transmission. The privateer team taking this car to the Trek threw out the back seats, and invested in higher-quality offroad tires. They also installed a nifty bullbar on it, threw on some lamps and put a communication system inside, in case they need a rescue. Hopefully they will not need it. 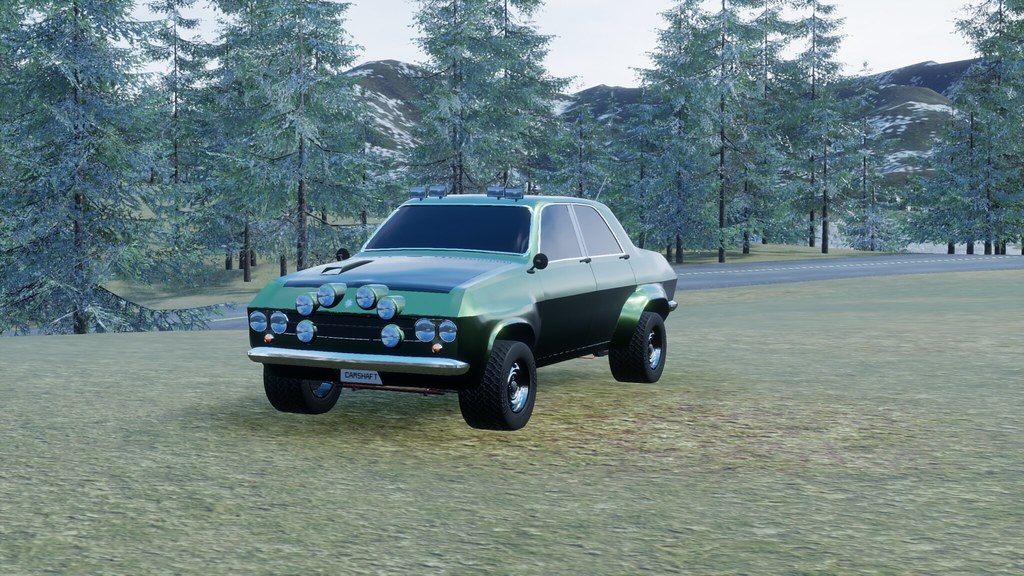 This 1966 Empress S was stripped from it’s base form, and modified extensively. The ShO8 gained DCOE carbs, an increased power output, and more advanced exhaust system. The body gained widened flairs, aggressively wide tyres, rally lights, and a little hood scoop. Overall, the Baja Custom has become much more agressive than what it was originally. 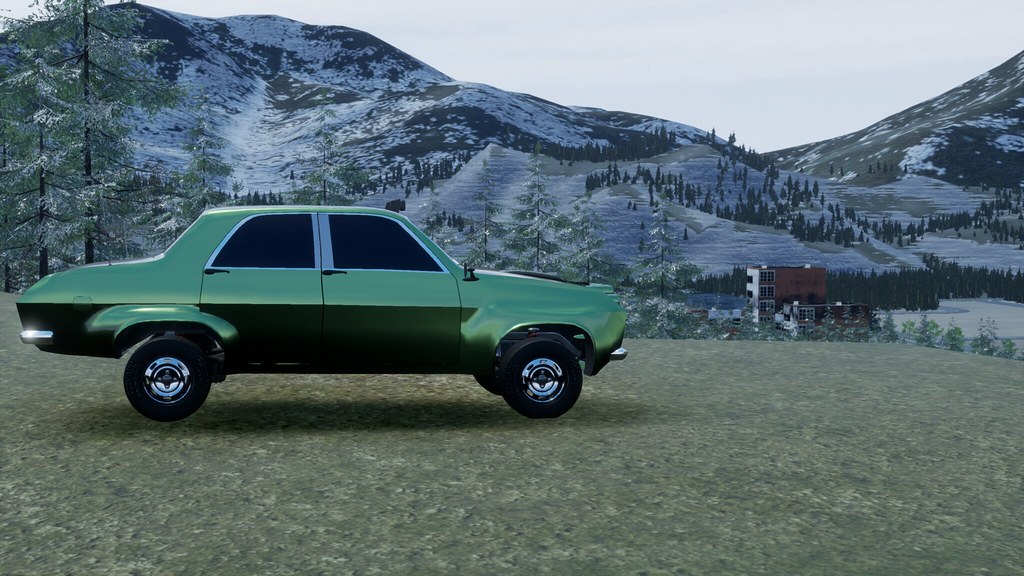 This car is being entered by the Sakura-Mathews America Factory Team.

Decisions, decisions… do I go for an amateur team using a modified Suzume, or a factory team using an Ardent? Hmmm… they’re radically different…

I think I’m gonna try and pull an alternate universe Keika here. If I can even get off-road high enough…

So entering this with a souped up Caliban

I have a lore car from Epoch Industries that I haven’t posted yet that will fit this one… Might have to tweak it a bit, but we will see…

Team There and Back Again

Two good friends, Stephen Nix and Christopher Hind, are US expats who live in Archana and are currently on leave from their oil exploration jobs with the Hell corporation. They have the money and the time to compete and have decided: “why not?”

They are an ameteur team and have used a budget of $10,000 on entering this race. 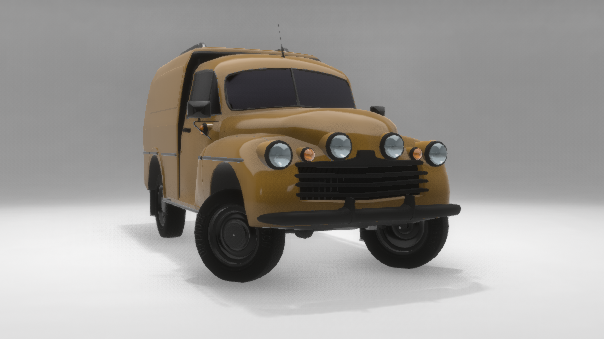 Having little money to spare, Chris sourced a straight, rust free, WWII era Bogliq GPDV and set about modifying it to suit the competition. The car was first stripped down, all rust removed and the body resprayed. Since this was an endurance event, raw power wasn’t sourced (or possible, lol) so the ancient OHV four was rebuilt with fully forged internals and a re-tune to efficiently use 92RON. The old carburettor was replaced with a twin barrel Leeroy Racing carb, for reliability, and the jets were re-tuned for efficiency. The exhaust was replaced with a set of tubular headers (scratch built) and the exhaust now had two mufflers so that Chris and Steve could hear each other talk!

The old canvas and steel seats were chucked and much nicer seats from a Bogliq Ambassador were bolted in. A top shelf radio was also installed. The front drums were upgraded with an official US Army field upgrade kit to a twin leading shoe design and a four speed gearbox from a junker Zealot was sourced. Finally, the car was made roadworthy by installing indicators, mirrors and some swanky new radial off-road tyres. 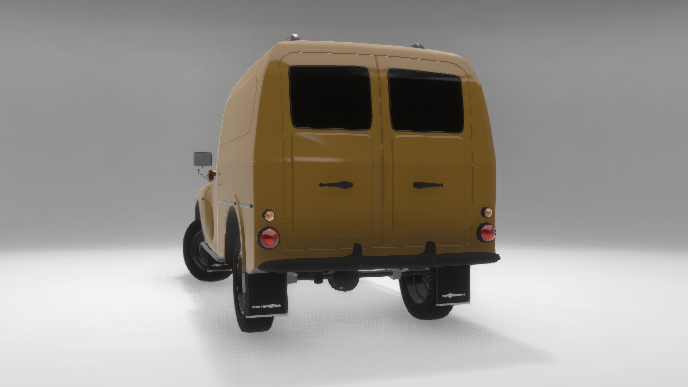 They may win or they may come last, but what is certain is they’ll have a great time doing it!

EDIT: The Ambassador seats broke their bolts (too heavy, lol) and the luxury radio had to be traded in to repair the damage. A set of front seats from a USDM Zealot and a basic radio have been installed in their place…

This is a 1966 TSR Ultra. But not just any Ultra. This is the Rally Safari Edition. They borrowed a chassis of another truck and retrofitted the Ultra body onto it. The result, a 4x4 off-road monster with the same 3.2 litre all-aluminium V8 as the base model Ultra. The budget for Team Katana Racing was $15000 and they did just that. An off-road 4x4 supercar? Here it is!

HighresScreenshot00146.jpg2071x1079 606 KB
The Katana Racing Team added 2 bullbars (front and back), a spare tire and an antenna. It’s not too powerful but it’s agile enough for the 1966 Great Archanian Trek…

Team
The Katana Racing Team is the one who tunes the car. The rally driver Cole Mendez with co-driver Takumi Kakayama with the crew chief Yuki Nagasaki and the chief engineer Kei Nakamura are going to participate with this car. They are a new rally team that started rallying at 1965. They want to win the 1966 Great Archanian Trek. But their problem with their car is the same with the Keika I, the fibreglass body. The chassis is okay but the body, the chance if surviving is slim. That means, the team needs to go fast at the most flat surface or go slow at the heavy off-roading route…

Its not blue, what is this?!

Thank you for the responses so far, I thought for quite some time how to do something like this where offroad is relevant and that doesn’t all end up in typical offroaders.

I made one change in the rules to make drivability more relevant.

Although it really should make no change, entries already submitted are free to be changed still (once - else it becomes a mess - please use the same PM as your original submission). This just to keep it fair. No need to confirm if you don’t, I honestly don’t expect it.

A Bogliq in any other color than bright blue is still a Bogliq, no matter how heretical it might seem.

Keika Automotive in a parallel dimension

Because lets face it, the standard Keika is a bit tame. With massive tyres and high suspension, this Keika is not one to mess with. With stats that rival the standard road car, on any terrain, and bulletproof reliability. Get used to the Taillights!