700hp is a pretty significant difference. I went back and made the tuning of the engine more aggressive (the current one is built to run on 98RON and isn’t maxxed out by any means), and put in a 2400hp engine, but honestly it only made it harder to get the same time and lost reliability. So now, if anybody can find a way to get a quarter mile time stat better than 7.98, I’d love to know how!

Impressive track time. My best 8.08 was done with a car thats 1150hp (roughly) lower than yours. Time to improve it. 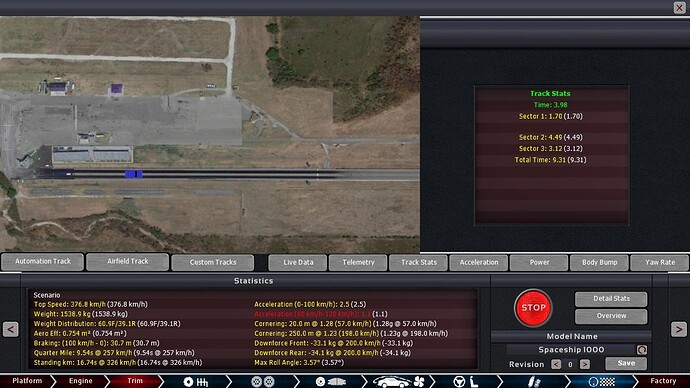 I can tell you right now that it’s not going to win in this class, though. But it almost certainly looks coolest

It’s a car i made for fun, as the name might suggest. 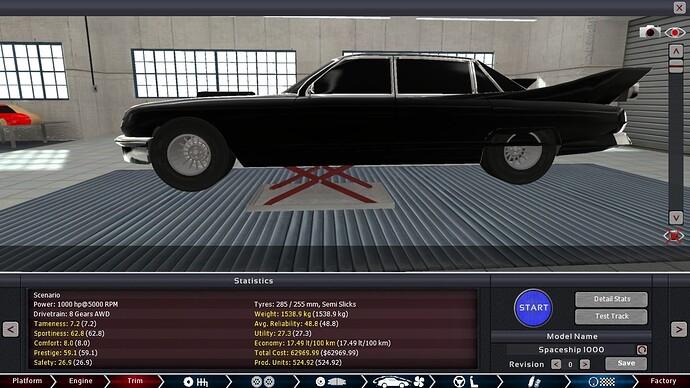 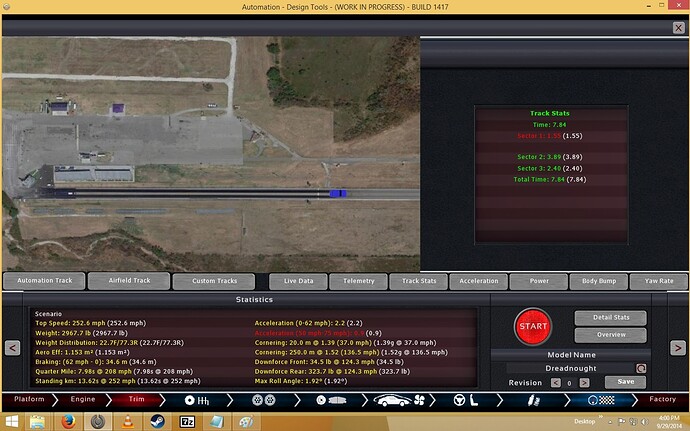 honestly, if i was almost 5 seconds behind the leader in Class X, that would have made me so embarassed that i would have stopped participating in community challenges forever.

Awwww come on! Now I’m going to have to fiddle with the gearing sliders (or I could be a good sport and concede this one as being pipped to the list despite having identical breakout times lol)

EDIT: sorry, GG isn’t exactly about being a good sport, more like winning LOL. I went back and noticed what the difference was, so went back and changed one thing… here you go. 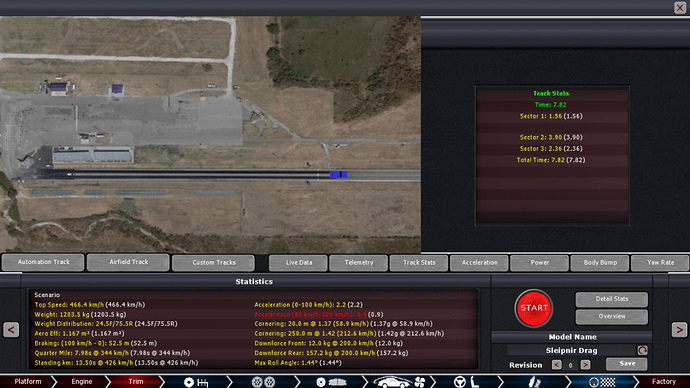 Here’s my entry for the Turbo 500 class, based on the same platform (and on the same engine) as the Spaceship 1000, but obviously the engine is tuned very differently here. 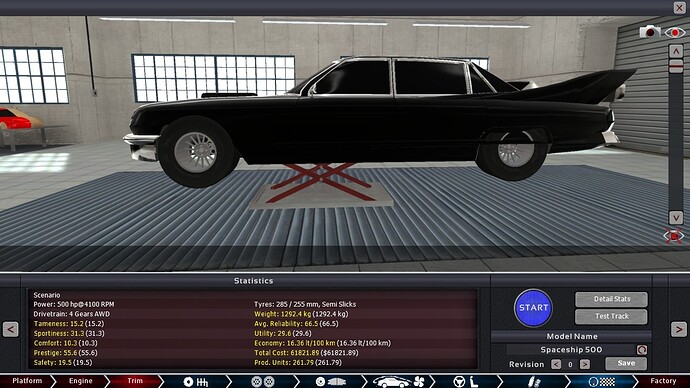 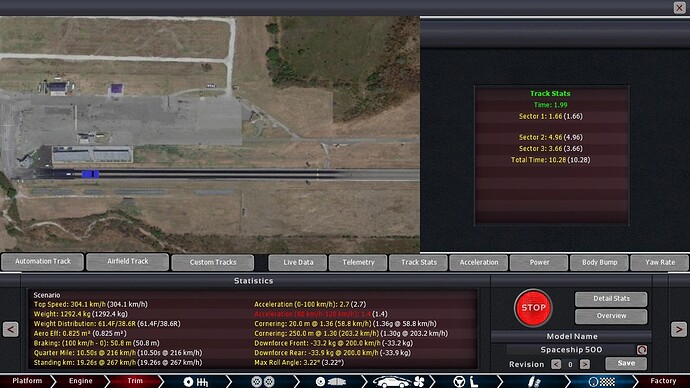 your move Strop.
Edited* just manged to shave another few hundredths off, now down to 7.79 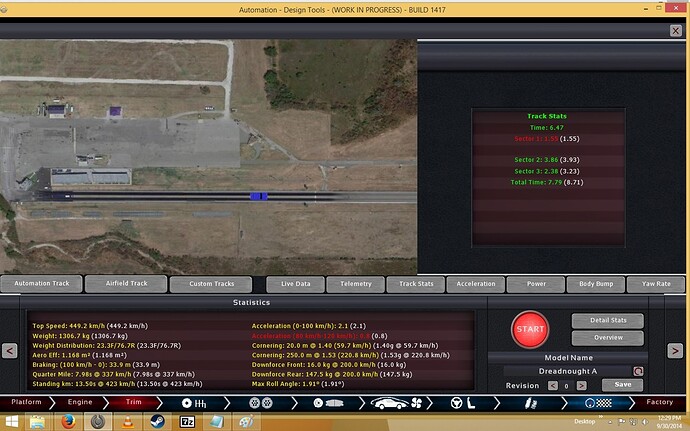 Hahaha you dick. Okay, I’ll come back to that in the next couple of days (and will edit this post when I have done so).

I notice that your car is quite a bit heavier than mine and the weight distribution is different. Also, are you using pushrod tech in that block of yours?

If you are then I think I would quit right now and happily hand you this title!

Sadly no my pushrod tech could only tie your previous score. It just was not responsive enough to get the last few hundredths I needed. 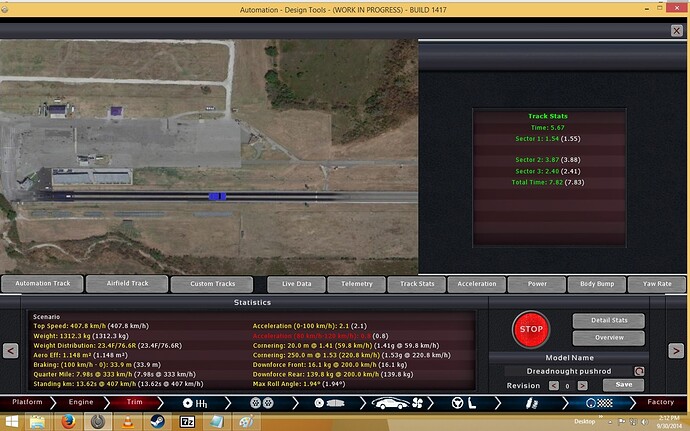 The new (legal) king of the A Class 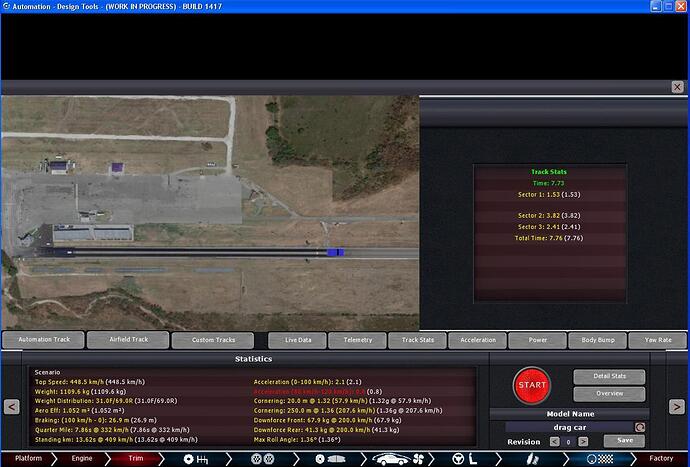 Oh no that’s on an entirely different level now! Back to the drawing board!

EDIT: right, went back and squeezed out more from the engine. It had quite a bit of room to move to be honest, but I didn’t even know that this version was capable of putting out quarter miles like this. There were plenty of other changes, which I’m happy to share if anybody’s interested in a mutual exchange of info 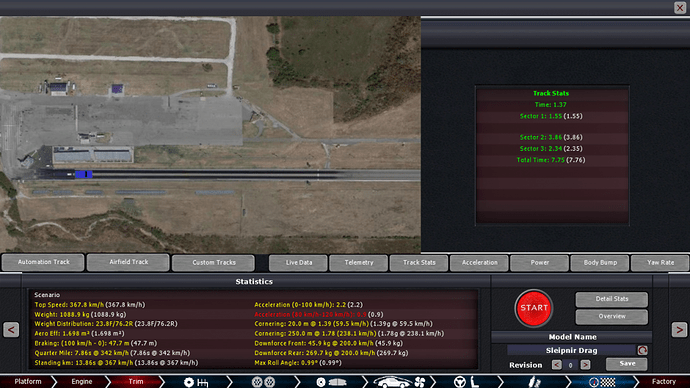 What kind of power levels are you guys at? I’ve hit my max in the 2350-60hp range, have you gotten more out of the engines?

Yeah I was using 2330hp-ish before, but that engine was a fairly “conservative” (lol) tune for 98RON (what) and I forgot to take off the 3 way cat converter and muffler (you know, all that unnecessary weight). Pushing out as much as I could to get a reliability of 0.1 for my ventilation, I get a nice round 2400hp (though I got the same time when I was running anything between 2390-2400 anyway).

I notice my car excels in the second half, but takes a few hundredths more to get off the mark. This is after I furiously balanced my downforce so my fat drag tyres wouldn’t blow their seams. Since your approach is similar to mine nialloftara, if you did the same (just check my stats), you’d probably find that extra time. However I notice luilakkie’s car has a very different setup and somehow manages to get off the mark that much faster. Is it running AWD?

EDIT: Oops, forgot that I changed suspensions too, and this freed up quite a bit of engine bay space. Screw 2400, somebody just got himself a whoooole lotta more horses to play with!

Okay here’s the new benchmark. I’m running 2613hp which is as much as I can fit into the engine bay, I think. POWAAAAAAHHHHHHHH!!! 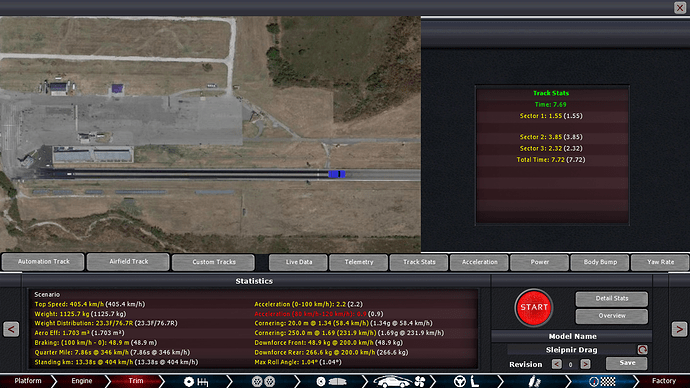 Whell sh*t id forgotten about switching the suspension I’ll have to try that tonight. You running funny car style front tires btw maybe my pushrod has a chance of dropping that tenth of a second still

Oh absolutely I’m running funny car style tyres, hell, in fact this thing is practically a funny car! I played around with the rear wheel diameters, the profile is close to 60 or something, but the front width is about 255… at least as low as I can get it without blowing and becoming the next biggest accident on the drag strip! For those of you wondering why my gearing is going all over the shop, that’s also me trying to get the gearing to accommodate the increases in power without lighting the rears up.

I wish I could use 125-135, but given the way I chose to tune it, that simply isn’t going to happen anymore!

How exactly do you know you’re “blowing tires”???