He guys, I figured since I washed my car today I would take some pics to share with ya! 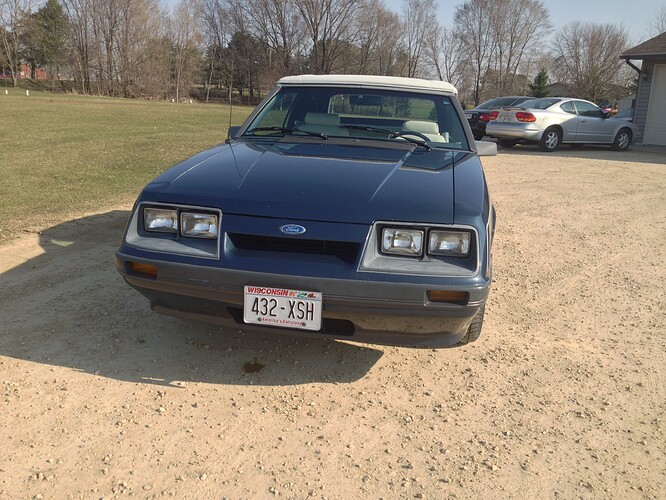 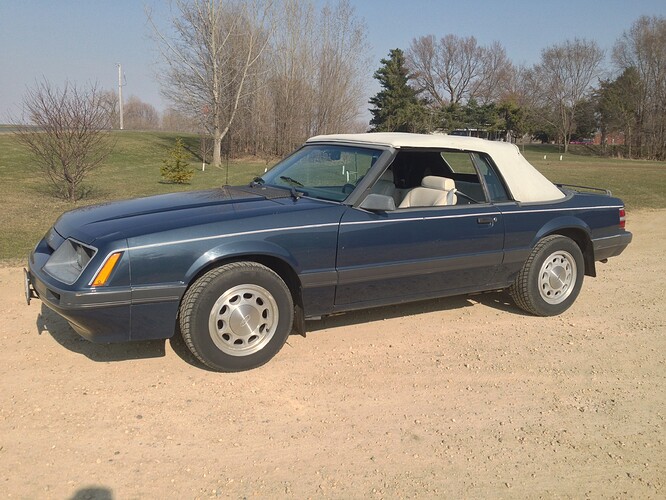 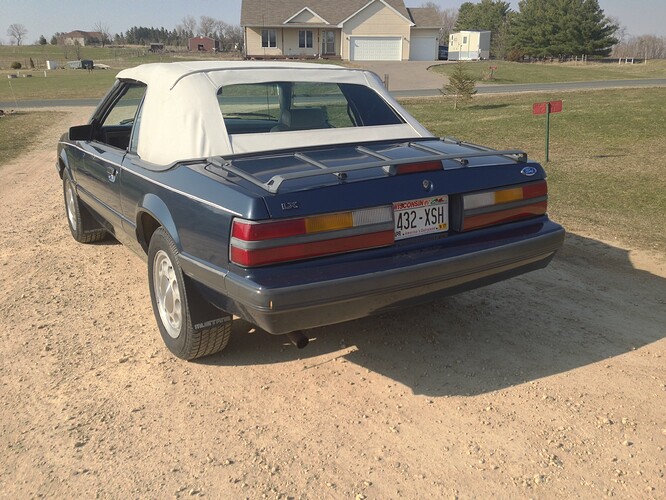 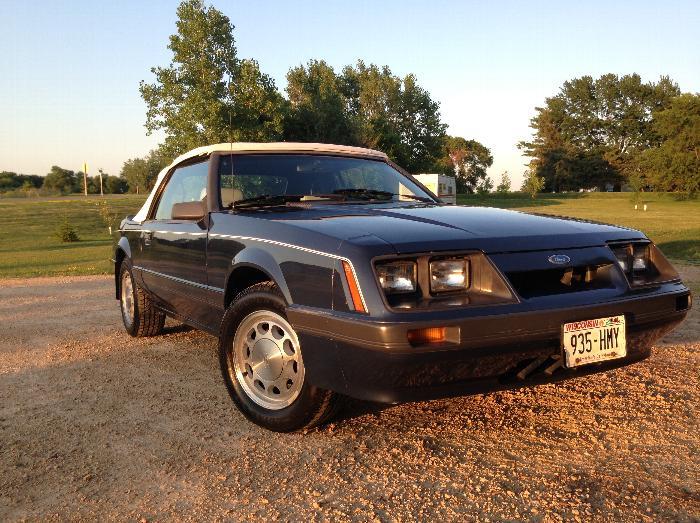 An excellent year (I’m biased, because reasons). Very clean for a 30-year old car, thanks for sharing!

How much does it weigh? Considering the size and the fact that it is an American convertible I can only imagine it’s a lot, coupled with the slow 3-speed slush box, I think this car might even be slower than mine

Looks fantastic!
You certainly can take car of your possessions.
Have you replace the interior or the top?

@Sillyworld Thanks for the complement! My dad and I have replaced the top. The front seats need to be redone, as currently I sit in a large rip on my seat.

That is indeed light for American standards, I was waiting above 3500 lbs. how fast is it then?

Ah, the last year of the “4 eyed” Mustangs. It’s a shame it doesn’t have the 5.0 in it. My parents have an 88 Mercury Cougar XR-7 with the 5.0 that we are slowly converting to the HO version that was only offered in the Mark VIIs and the Mustangs. Your car is in really good condition from that era. The Fox Bodies were such fun cars. (I’ll keep my 2013 though.)

@Leonardo9613 they can be pretty quick. The mid-80s were awful times for American Muscle. Even the 5.0 HO engine only produced 225 HP from the factory (300 Ft-Lbs stock, I think). The fact that they were so lightweight is what made them particularly fast. The transmissions weren’t that bad either. You definitely had some significant losses in the 86 model we see here, but when the AOD came out, there were marked improvements and that transmission was used in everything from trucks & SUVs to police & sports cars for more than a decade.

You have to remember that the California Highway Patrol ordered these cars to chase down the Lamborghinis and Ferraris of the day. With the right adjustments these cars could exceed 140 MPH.

I was asking about the stock 120 HP, slushbox equipped, V6 really. All cars can be fast if you tune them, especially when it comes to straight line speed.

@Leonardo9613 I just looked it up on Automobile-Catalogue (a-c.li) and,
the estimated 1/4 mile time for my car is…
##slow

That time is also due to the highway gears (2.73:1)
It’s ok to about 45 mph, and the suspension feels sporty at regular road speeds.

And for american standards and for this size of a car and this size of engine (3.8 L is quite heavy and big by EU standards, laugh at me) 1315 kilograms is pretty good result, even for european sports cars.

Not bad. I’ve seen plenty of foxbodies, and driven one, but they were all either junked, or stripped down for some reason (the one I drove was tracked, it had a stripped interior, and the 302 was tuned. That was the car I learned to drive stick on). I wouldn’t buy one with those features, but I’d imagine that it would make a good cruiser. What’s the fuel economy like?

Thanks for all the positive comments everyone!

And @SkylineFTW97 the reported economy from the factory is 18 mpg city 24 highway, but my engine currently runs too rich (or so it seems), so I get around 16 city and maybe 18 highway. (It’s also got over 98,000 miles on it)

I’ve got some new o2 sensors for it, just need to install them, so hopefully that will help economy.

And yes, it’s a great cruiser! 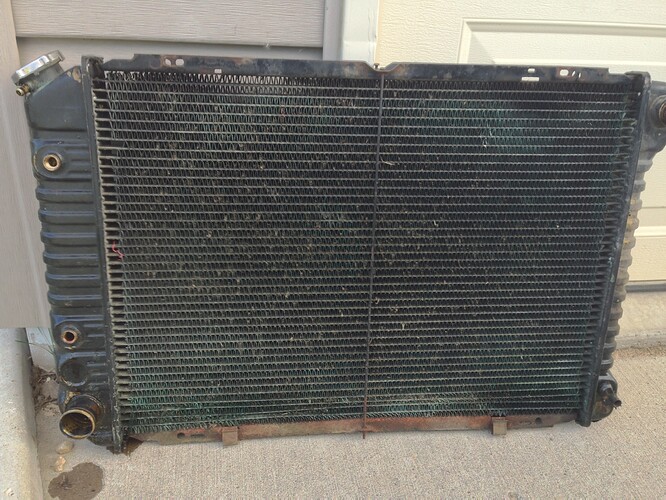 Yes, I recently replaced the radiator as it leaked like a sieve under pressure. (lower right corner in pic)
Once that was done the fittings on my transmission lines going into the new radiator started leaking. The upper one needs to be replaced.

And that’s where I currently am on this car. It’s sitting until I get something to fix or replace that upper fitting. 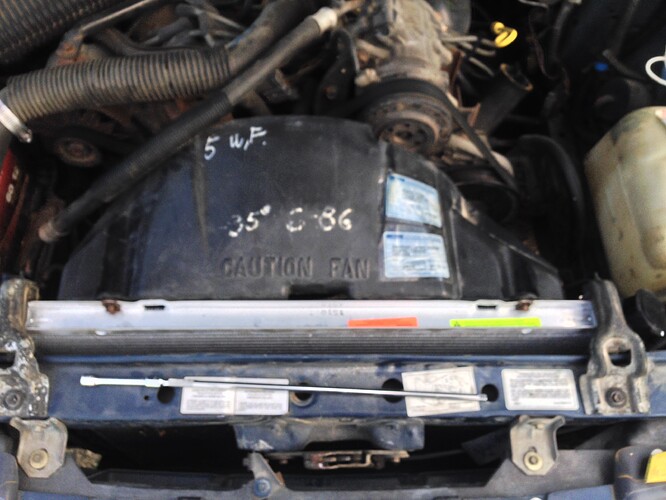 Try scavenging some fittings off a junkyard model. I did the same to the Galant a couple months ago, and that’s how i found new fittings (it helped that the 6G72 is a relatively common engine among DSM cars. Google what models used the same engine as your mustang and see if there’s one around for you to scavenge parts off of).

wow, forgot to update you guys on this…

So here’s the skinny:
Radiator works flawlessly, just needed a new trans line fitting from the local parts store (its a universal design, but costed me like $10 for the stinking little thing!) 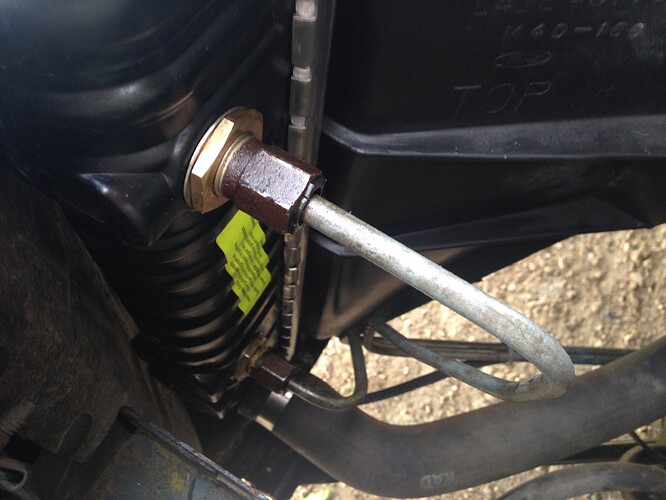 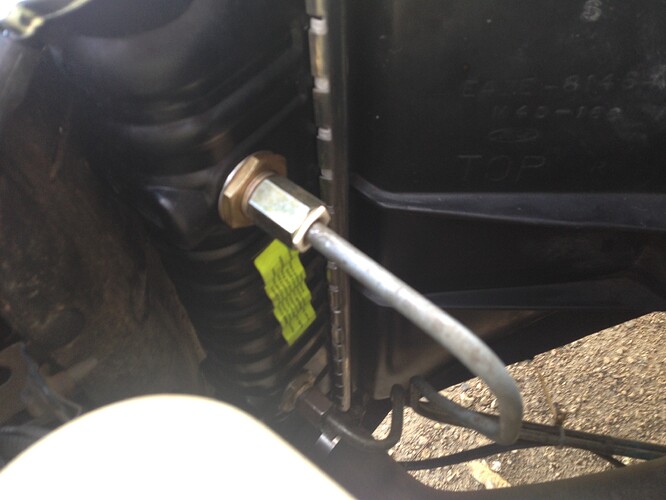 ###But the GOOD NEWS:
is that I drove the thing to the 100,000 mile mark on its original drivetrain! 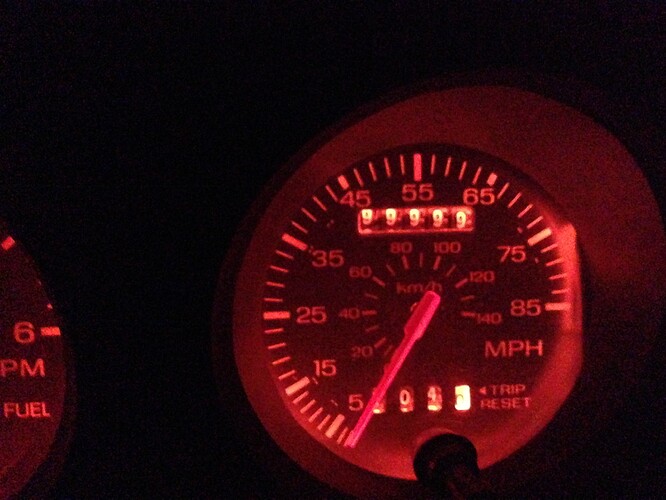 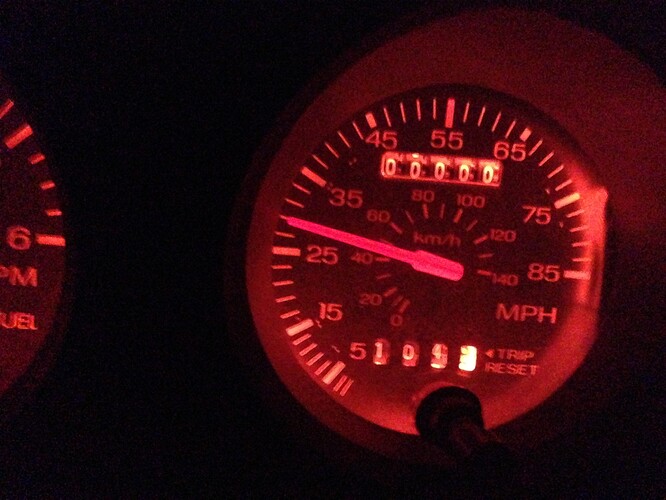 ##So what’s next?
The Mustang is currently sitting until I replace the crappy V6 with a proper V8!
…And I already have an engine waiting to be rebuilt 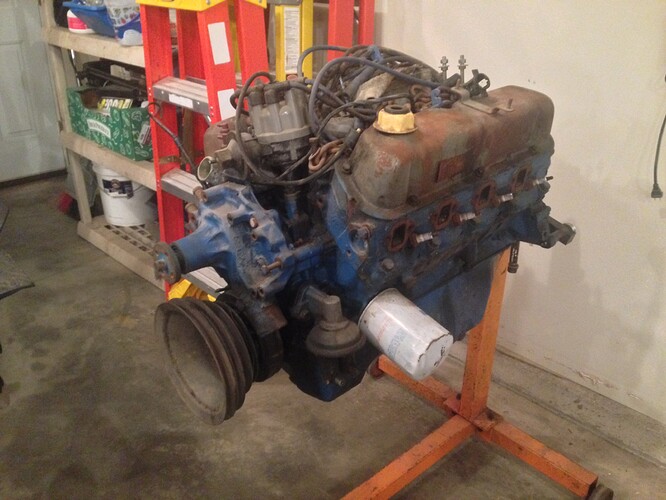 A Ford 302! (5.0L) The block is from '73, but the cylinder heads are from '68. It seems to have a simple Weiand 4bbl Dual Plane intake on it, and my dad has some good exhaust headers for it as well! My dad has a 4bbl Holley double pumper carb sitting somewhere as well, but I still need to rebuild the engine. If it is not salvageable, my dad also has a 66 (or so) 289 that’s never been rebuilt also sitting in the garage.

Well, there’s the much overdue update for ya!

How many cores deep is your radiator? That is something many people ignore when swapping a V8 into a fox body. So long as you’re using the same radiator that comes with a V8 Mustang you’ll be okay, but if not then you can expect overheating problems.

Same radiator can be used on V8s. I made sure to check that, as I was planning on the V8 swap.

awesome little car I wish we had these in Australia. Please whateva you do do not make it a cross dresser by putting a chev in it. and if ya want a little inside scoop on engines in Australia not only did we have the mighty 351 Cleveland but we had a 302 Cleveland and they are dirt cheap over here just in case you decide you want POWA

the cylinder heads are from '68

I would definitely make it a point to find an 8.8" rear to pair with that motor. I really hope that the 302 is salvageable. It’s much better than the 289 was.