Welcome to the 25th edition of the Great Archanian Trek

The great Archanian Trek is an offroad endurance rally open to amateur and professional drivers. The terrain is tough but not unpassable. Rather than speed, durability and drivability will play a serious role in who finishes in the least time. There are three classes to compete in: buggy, offroad, and truck.

This competition is simulation a Paris-Dakar style event. You will need a sturdy, big wheeled vehicle. Stages will be communicated only after the deadline, with a nice aimpoint is that it should be able to perform something (if not fully complete, this will not be one of the stages), the rock crawling of the BeamNG route East Coast USA - Off-Road Trial 1.

The following elements will determine the outcome:

Please introcude your car(s) below. Indicate brand and home country of the brand. A driver and codriver, and their nationality, have to be named. Lore is encouraged.

PM me the exported .car file:

So I made a model lineup for the Bauer company up to 1985 (so far) so once I catch up to the 90’s and post a metric shit-ton of lore I look forward to adding my new BMW rip-off company to the mix!!

Not sure if I’ve got anything ready for this, but… I might try to come up with something. 1980’s design is what I’m good with, on a visual scale, but I don’t actually have any current 70’s to 90’s Sinistra coupes that aren’t the Sunbolt, and I’m not going to try this with a rear-engine, rear-wheel-drive sport coupe.

Does the Pontiac Trans Sport body counts as a van? :Thonk:

can you give me a more detailed definition of “offroad bodies”?

How are you going to make reliability a fair score without having any ET or PU limits surely everyone will go for max quality spam?

Edit: also could you define what is an off-road vehicle body because a wide range of cars entered the Paris Dakar and weren’t necessarily off-road vehicles but wouldn’t have fitted into the buggy category

if everyone spams then it is even again :LENNYTHINK:

Does the Pontiac Trans Sport body counts as a van? :Thonk:

If you can make it look like truckish and get it over the weight limit, yes.

can you give me a more detailed definition of “offroad bodies”?

Jeeps. Offroaders. There aren’t any SUV bodies this early. So not Vans, Sedans, Coupes, Sport cars. I struggle to find a case where it’s doubtful.

How are you going to make reliability a fair score without having any ET or PU limits surely everyone will go for max quality spam?

It’s part of my challenges that people are quite free. There is the service cost part, which counters this. Power/speed is IMO not the way to go. And many other quality spam has limited relevance in Beam. I will make a disclaimer in the rules to cover myself here, and allow me to bounce back any submission over the top on this front.

Edit: also could you define what is an off-road vehicle body because a wide range of cars entered the Paris Dakar and weren’t necessarily off-road vehicles but wouldn’t have fitted into the buggy category

I know they are not buggies in the actual Paris-Dakar. But a tubular chassis with fiber glass body of a hatchback or sedan, e.g. Peugeot 205 or 405 Dakar, would fall under buggies for the purpose of this challenge.

Any limits on price, PU and ET? If not, why not?

is there any price limit?

Any limits on price, PU and ET? If not, why not?

is there any price limit?

I kind of answered that in the previous post. The question is more, why yes?

There are advantages to low service costs though.

Any limits are those within what is reasonable and realistic. I will discuss submissions with the user if I deem them unreasonable, and will always motivate why I think so in that particular case.

The challenge is to not go overboard despite the no limits. Based on testing, I cannot see anything gained by building a ridiculously expensive or complicated car.

Out of curiosity, which wheels were driving?

Oh, just an old export of one of my cars, actually one that I made based on the 1966 Great Archanean Trek, a 1965 PMI KG Baja. 4x4 chassis adaptation. 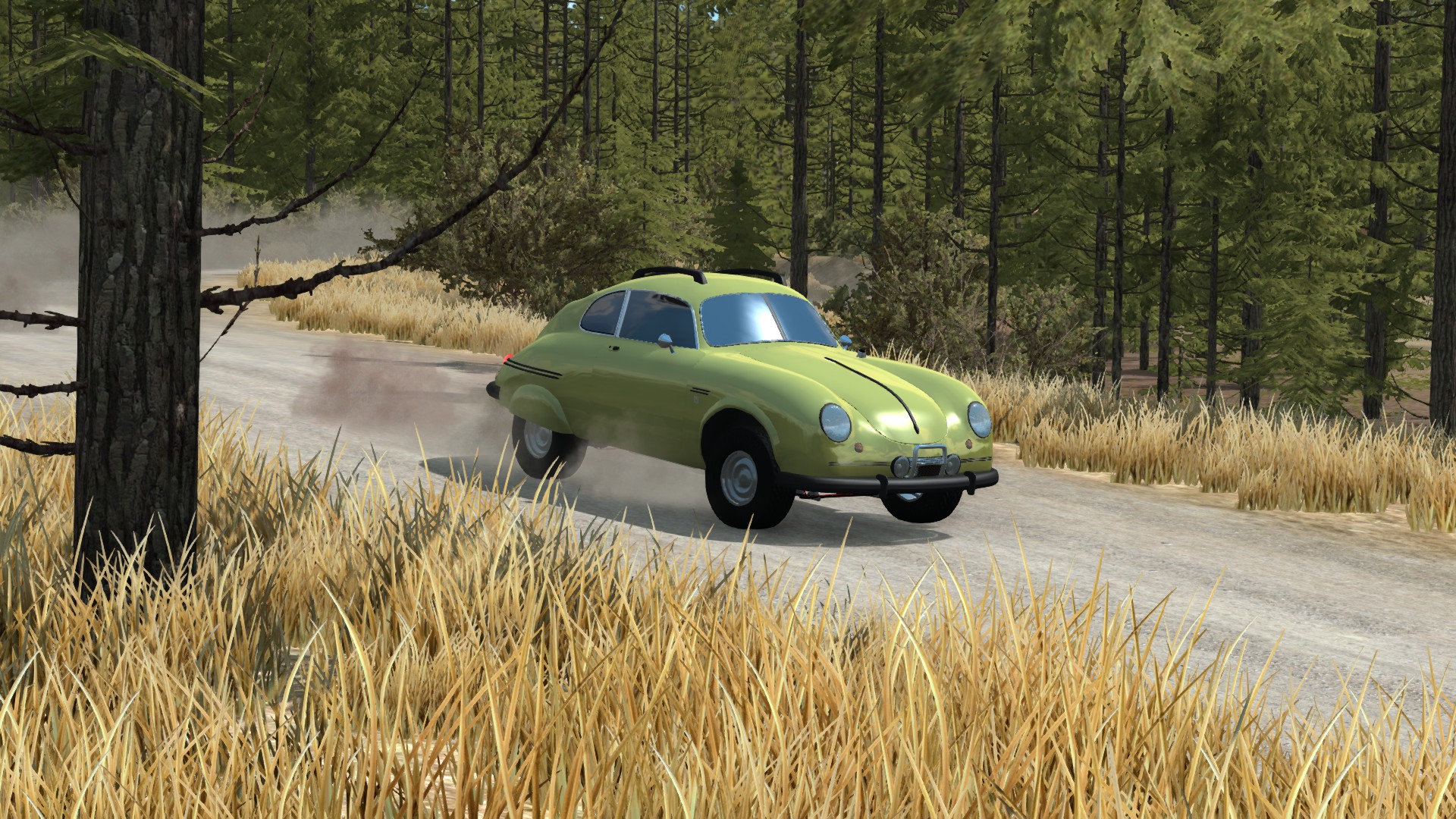 Might have to try something crazy with the new cab-over designs… But even if it may be a Sinistra, I will be adapting 4x4… At least, I think I will. It’s not quite against lore, just very… unusual. Of course, I could just stuff a V6 in there and spin the front tires, but I don’t think that’d make it very far.

@Private_Miros
are you gonna drive them in beam or will you do this challenge via Spreadsheeting?

As usual, Beam for the base times. But with spreadsheet modifiers.

Now, will extra tires, jerrycans, etc. account for anything?

It’s a desert endurance race. I would prepare for one.

In my testing I have noticed that I get a small amount of wheel clipping through body when landing hard in beam, will this be ok?