Around a year ago I purchased this little green baby as a learning tool. Every time I try do anything on it I struggle to find info on the internet, so I thought I’d make a post here to try help someone else with the same issues in the future. 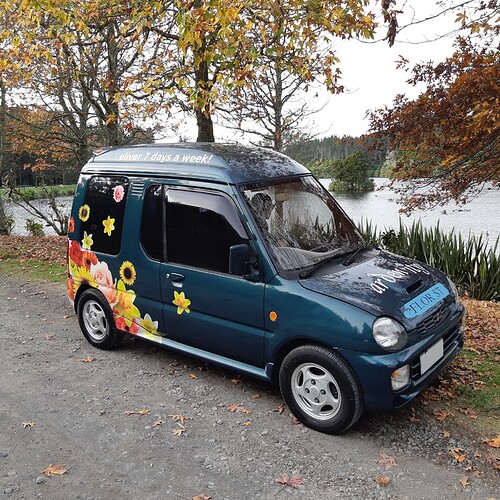 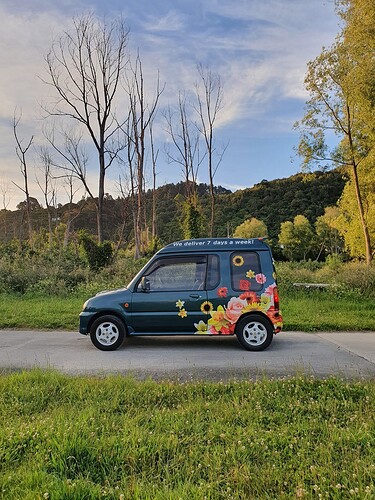 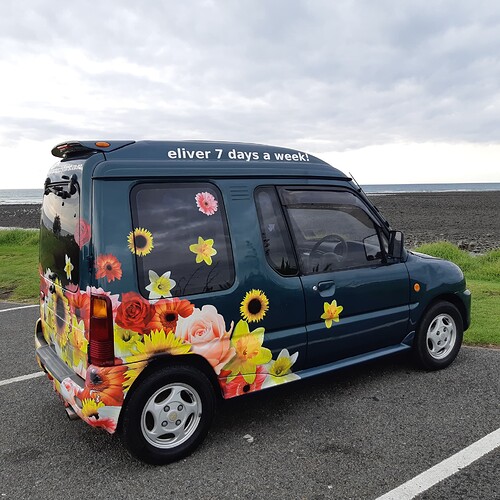 It had an expected dead motor after the failure of the timing belt tensioner. I dismantled the motor and found there to be no major damage, other than some minor marks from the pistons giving a couple valves a kiss. I spent weeks with my Machinist trying to find the bearings. I ended up buying some from Amayama and some from Megazip.net after translating an OEM Mitsubishi workshop manual found online. Be aware that Megazip will charge you then check stock then refund for missing items, while Amayama will check stock then charge you. So always contact Megazip to double check stock before ordering, otherwise you might lose your transaction fee if they have to refund you the whole order.

I had purchased “Mitsubishi Pajero Mini & Bravo 4A30 Engine Service Manual 1994-2002 - Paperback” by James Danko and it was wrong so many times when compared with the OEM manual, I just had to throw it in the trash. Tolerances, torques and processes were wrong… 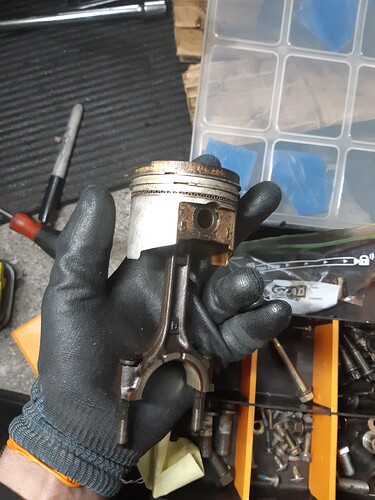 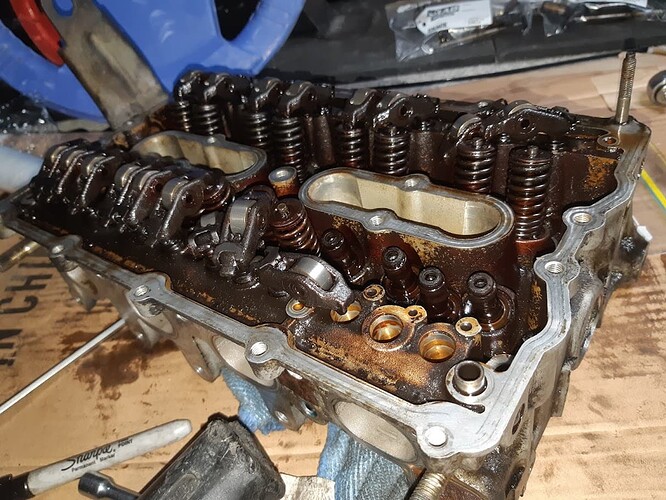 The engine went back together relatively easily. I did however find my ebay gasket kit was garbage, and I should have just tried to get every OEM gasket I could. Mitsubishi Japan (through Amayama) still had most gaskets including the head gasket that I purchased, but not the complete kits as one item. I also had a single piston ring snap on instillation, which cost $5 to replace with an aftermarket 60mm x 1.25 C ring that I then sanded down to fit, as Mitsubishi wouldn’t sell me 1. I 3D printed a tapered ring compressor to get the pistons in. 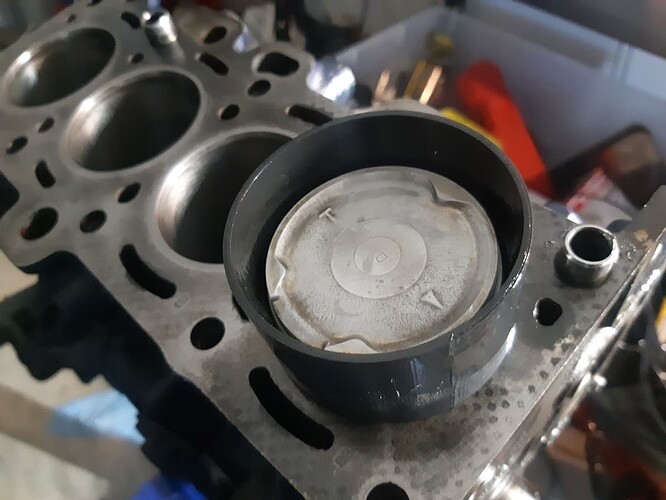 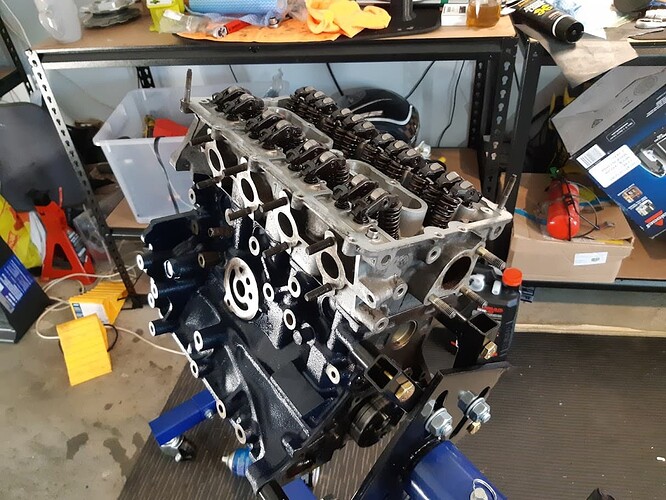 I purchased a 3L ultrasonic cleaner to help with the cleaning. It worked great, but I wish I had bought a larger one. It especially helped with the hydraulic lifters. They were thoroughly cleaned then prefilled with diesel oil as per the manual (weird, I know.)

Once the engine was reinstalled I set the timing using the normal Mitsubishi diagnostic ground terminal in the engine bay and the absolutely shit front cover markings. Apparently they improved this for the next year, or so says my 1993-94 changes manual. 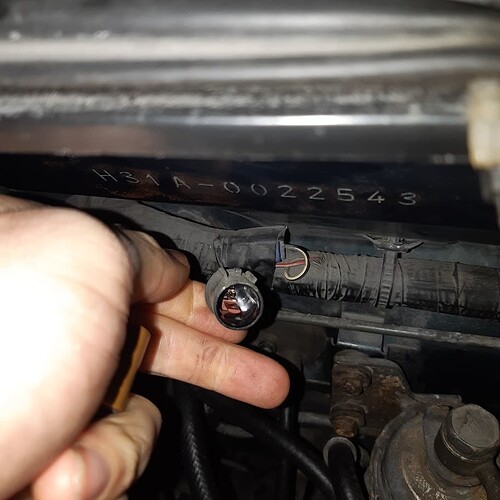 Now that the car was running I needed some better speakers, so I installed a sony head unit with some cheap Rockford Fosgate P142 Punch 4" 2 way speakers, and P152 5.25" 2 ways with 3d printed brackets for the front 4 inch speakers and the plastic adapter plates that came with the speakers for the rears. The internals of the doors and body are bare, so they could definitely do with some sound mat. 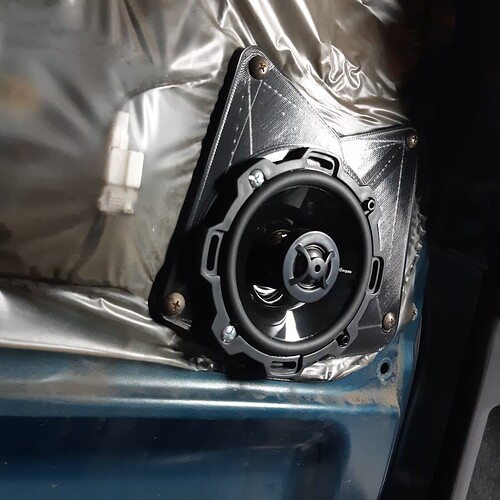 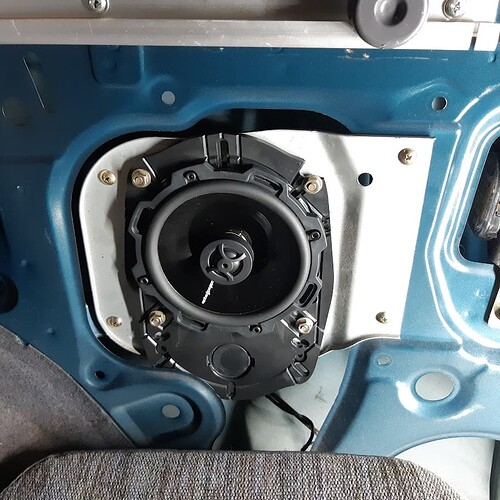 After driving the car for a while I noticed a very slow coolant leak and it getting a little hot under load at highway speeds. I proceeded to replace every coolant hose I could. Mitsubishi basically had no coolant hoses other than the most major lower radiator hose, so I had to use a lot of generic 8mm and 13mm coolant hoses and some generic bends. I also noticed the aircon had no gas, so I just removed the whole system excluding the compressor to make working in the engine bay easier, which I am very glad I did. I can add it back later once everything else is 100%. I 3d printed some adapter plates to keep the AC line holes clean. 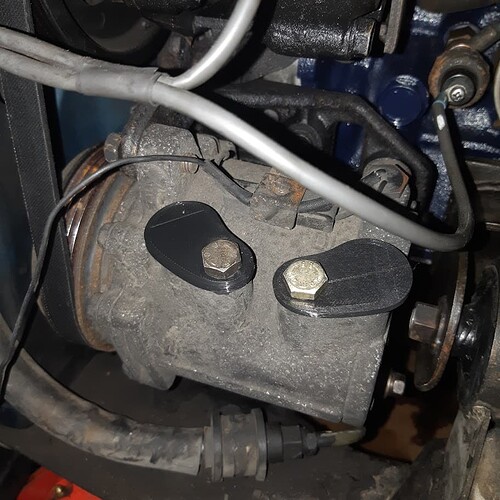 After pressure testing the coolant system (buy a cheap coolant pressure tester, they’re the best) and test driving the car I tried a few full throttle runs and realised the car was stuttering and not accelerating passed ~6500rpm, which is before where the peak power is meant to be. The engine would free rev to the redline no problem, so I presumed it was a fuel issue. This may have contributed to the heat on the highway if the fuel pump was having issues. There is no pump access hole in the car, but thankfully the tank is very easy to remove. I have dropped the tank and measured the pump. It appears to be a good fit for the BOSCH 0986580979 universal EFP007 fuel pump. That or any 1993 Mitsubishi lancer pump. I have ordered the pump and will report back when I go to install it. 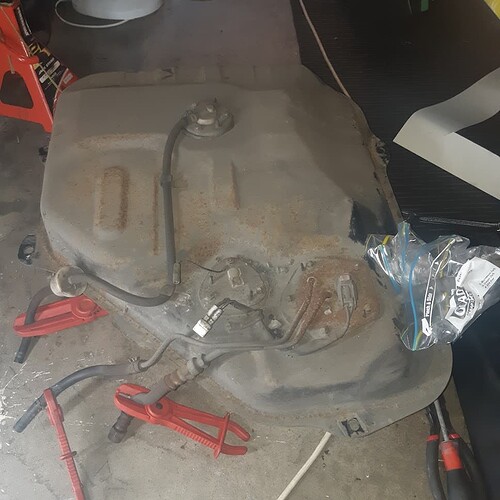 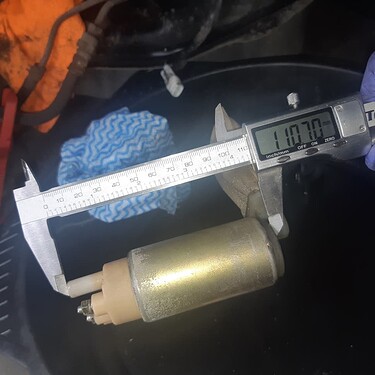 I also noticed the intercooler foam had disintegrated so I stacked some heat resistant plastic foam tape to replace it. You can buy the whole vent from Mitsubishi but not the foam. 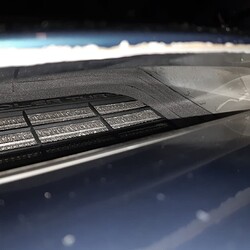 While waiting on parts I also purchased some “RS-R SUSPENSION DOWN 1SET FOR MITSUBISHI TOPPO H31A B001D” Lowering springs from Black Hawk. I have installed the rear so far and dropped 4.25cm. The install was extremely easy. However they are a bit soft, so my 165/70R13s rub on bumps at highway speeds. The rear guard lips will need rolling and I might need to run lower diameter rear tyres. Photos to come once the fuel pump is done and the fronts are installed and aligned. 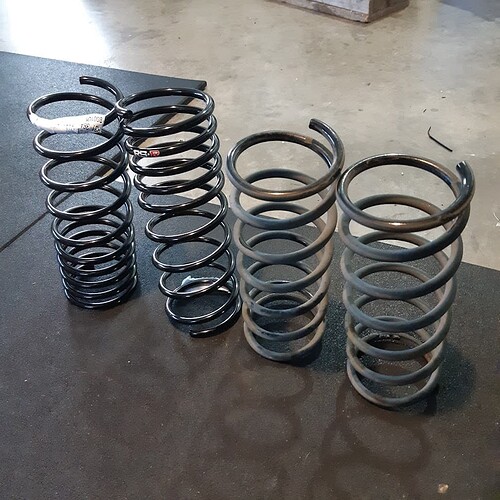 I’m excited to get back to driving it. Its already been a useful hauler for my drift car’s bits. 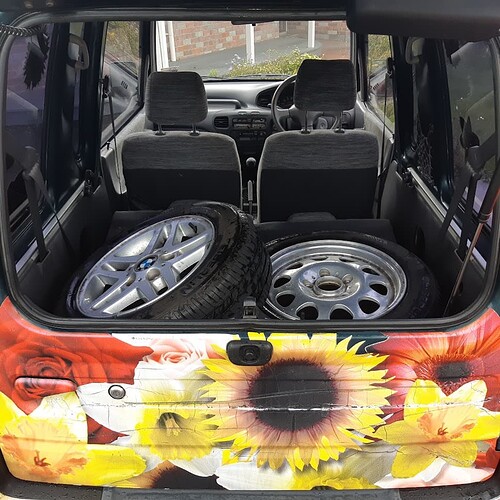 So the generic Bosch pump fit perfectly, but sadly did not fix the hesitation. The car still wouldn’t accelerate passed ~6000 rpm in third gear. Maybe its a boost leak, maybe its dying coils? Not sure what to check next. 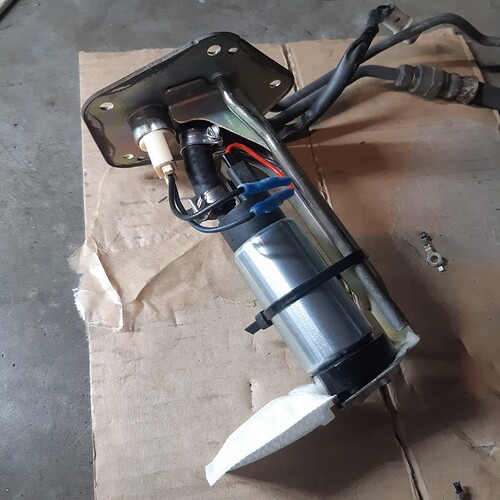 After pulling the plugs I noticed Cylinder 1 was looking quite different to the other 3. No where near as rich, which makes me think its running lean and the ecu is compensating by richening up all cylinders. I took the fuel rail out to clean the injectors but decided to get them flow & leakdown tested professionally instead. I will get a professional opinion on the plugs too.

Edit: Took it to a professional who is gonna give the injectors a test. They think it might actually be sticky valves, which wouldn’t surprise me as the engine was rebuilt entirely because of that being a possibility. The valves were measured to be straight, but they’re also probably some of the smallest valves of any car ever, so I wouldn’t be surprised if the tester was inaccurate. Might be valve guides or something binding too. Next test is a compression test once my new tester turns up. 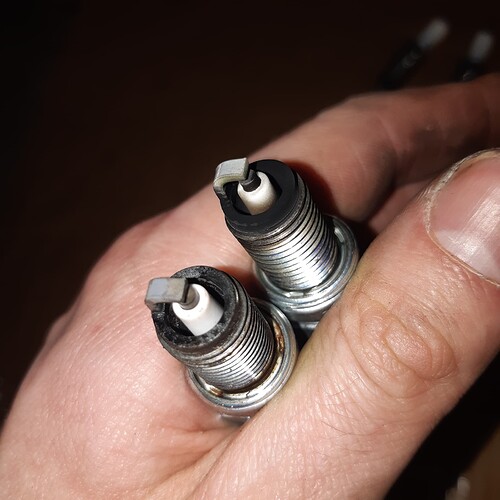 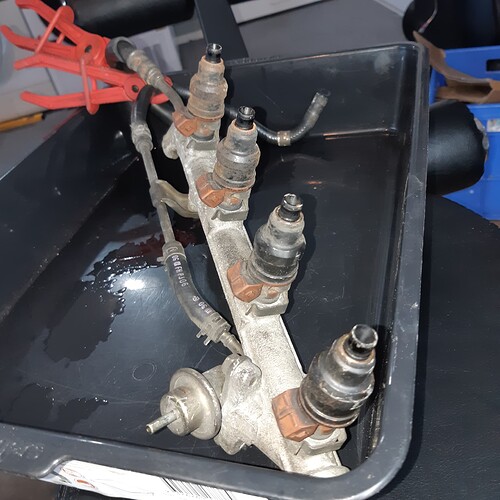 The injectors’ patterns were trash so they were professionally cleaned, and I replaced all the orings and gaskets. I also installed a new fuel filter: RYCO Z440. This was 1/4 the price of the OEM Mitsubishi filter. 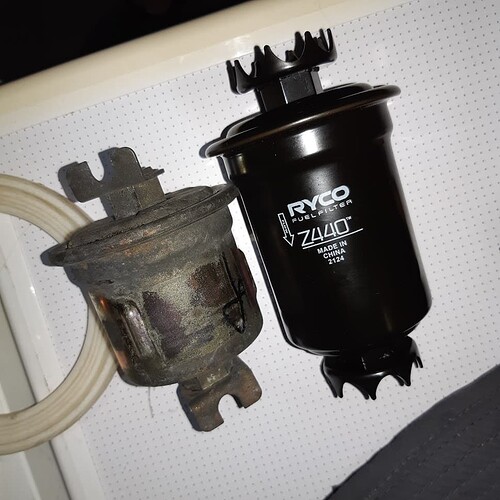 I am pretty certain this is not the issue though, as while I was warming the engine after reinstalling everything I noticed the pop/cylinder compression noise I could hear through intake stopped after a few minutes of idling. I revved the engine a bit and the pop came back temporarily. I think this means the issue is either a failing hydraulic lifter on cylinder 1 where it is not holding pressure or a valve is getting stuck. Not quite sure how to figure out which issue it is, so I think I’ll take it to a dyno.

Here is a video of the intake noise. You can also hear whatever top end issues cylinder one is having. 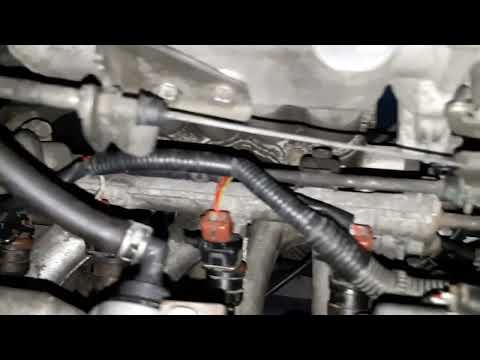 I compression tested after warming and all 4 cylinders had exactly 155 psi, so that’s good at least.

Alright so the mechanics basically said the hesitation was the hydraulic lifters being old and sad after 300,000km and that they couldn’t source new ones from Mitsubishi, so

The car ran great going to and from the mechanic on the highway, so its not the end of the world if I can’t rev it to 8500 anymore provided I can drive it. Peak power is meant to be at 7500, but its more like 6000 now. If it comes to it, there are a few much lower km engines for sale in Japan.

Anyway, I installed my RS-R lowering springs & then noticed the rear bump stops are completely gone. I have ordered some OEM ones from Amayama, but it’ll be another month of it sitting in the garage not being driven

. The front bumps were a little sad but still complete, so I’ll get some harder aftermarket ones later. 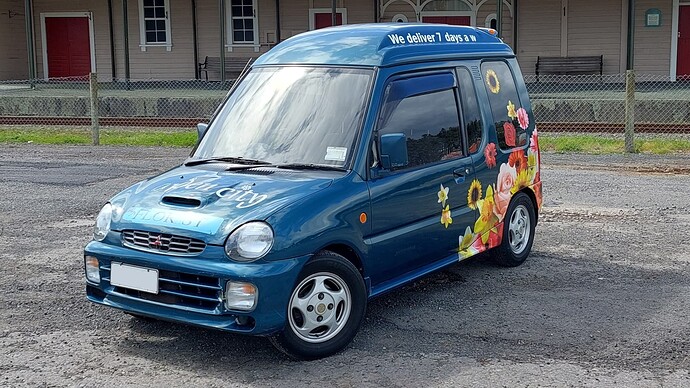 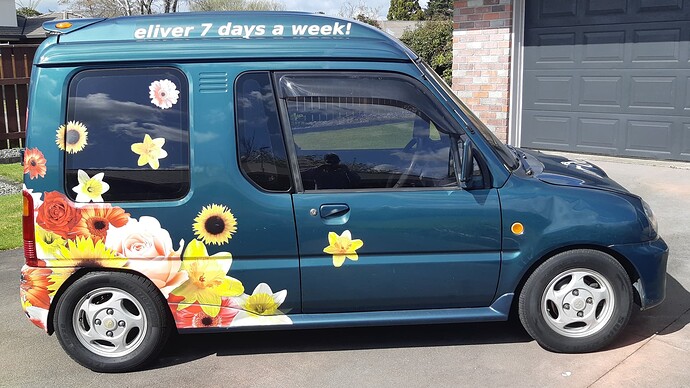 The springs resulted in some hectic tyre rubbing but that might just be because of the lack of bump stops, we shall see!

I also invested in a couple caramel wheels to try get the branding off. Wow they are magical! A little hit with the heat gun then the eraser wheel and the branding came off no problem. The whole car needs a wet cut and polish, which is up next.

Edit, here is a photo of said missing bump stops & the RS-R springs installed in the rear.