after multitude of hours spent perfecting this I achieved 300 hp and 314 ft/lbs of torque out of a 16 V 2.2 liter 4 banger this thing would be a blast…

the trick is that the WHOLE 314 ft/lbs of torque comes out at 3200 RPMs this would be perfect for an AWD car or sports car%between%. so what do you think guys? 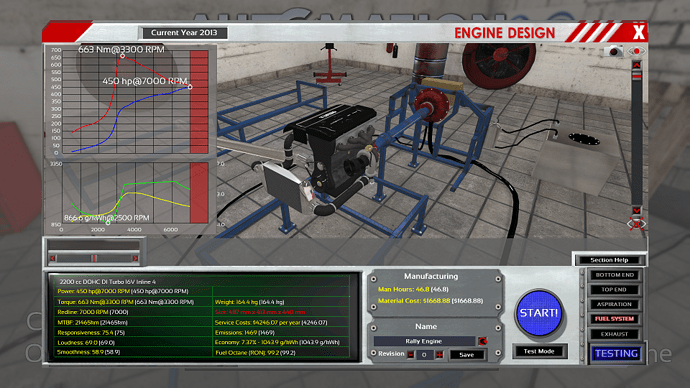 @drhouse: I wanted the torque peak to come as early as possible in the RPM range that was one of the major objectives. MTBF was high on the list as well it clocked 68K on the original. also I tried to make it as real world as possible by running 91 octane AKI fuel.

very good lets say you had EXACTLY 4000cc to play with for a rally car make it something that would destroy…everything on the Rally circuit ever make the engine shame the infamous Group B Rally Engines of the 1980s!

this I reckon will destroy most of everything given a trans tailored for the torque peak i.e: 7 speeds tall gears and mid-way rear axle (3.55 for example)

if HP is all that matters then I can probably make around 750-800 HP on this, torque peak will be later in RPM range. and I reckon a V8 with 4000CC would make more power (better volumetric efficiency per cylinder, i’ll try that tomorrow).

what would you guess the top speed of that car would be if it was in a rally car then?

I would guess around 170 MPH more gears more speed because of the mountain of torque, It reminds me of a diesel engine.

yeah that engine would destroy all Group B cars with ease…