So I had this for a while (1 and half years) actually. But I guess since I’ll post this now that I’ll actually do a bit more modifications to it. 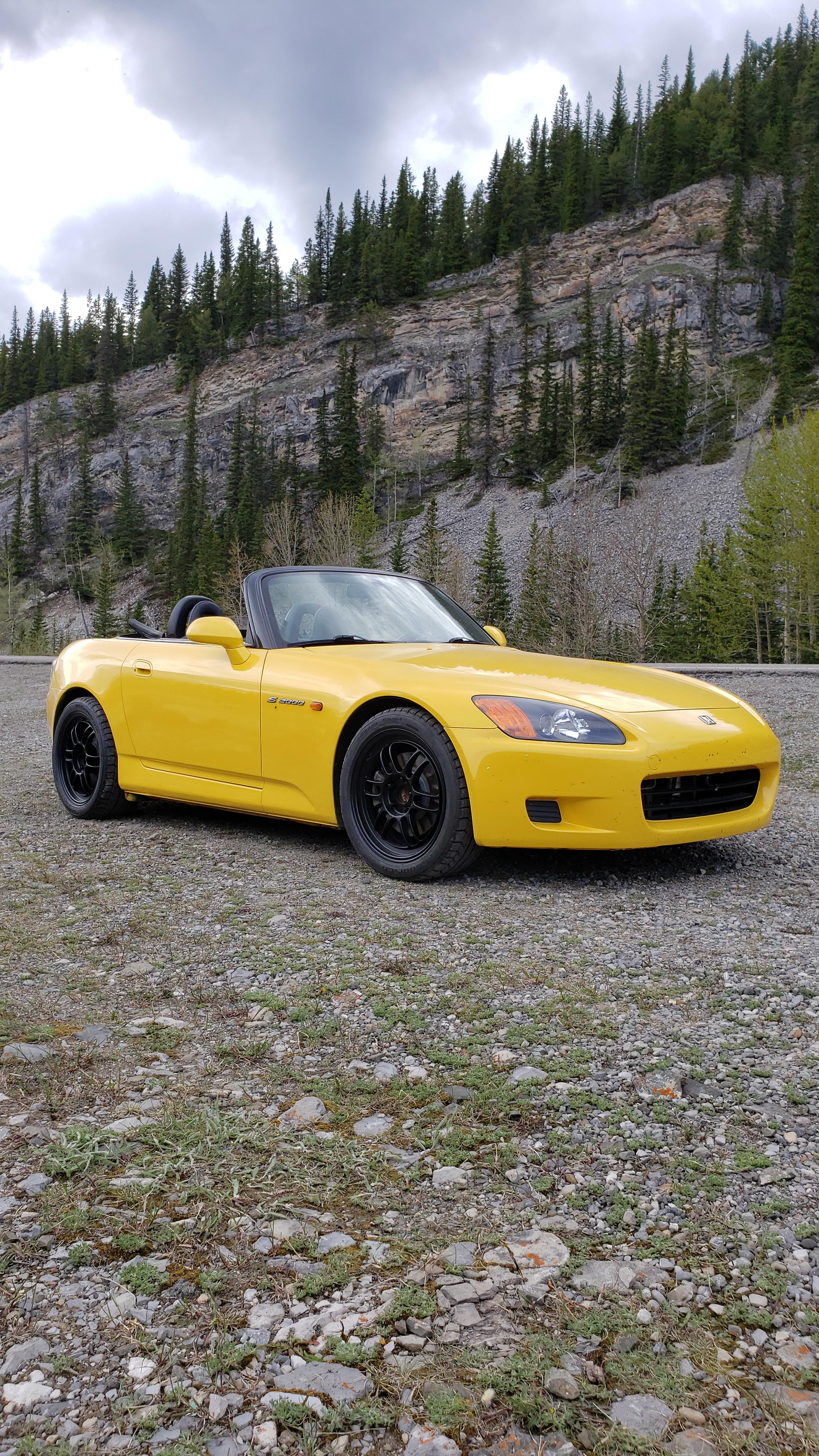 First thing to say is this is not my daily. I don’t have a daily or need one for that matter, which is why I decided to buy a fun car that is woefully unsuited for where I live (Calgary, Canada), where there’s snow for half the year and unpredictable for the rest. So, as a guy who likes cars, I went and bought something that I like and something that would make me happy. And that’s all there is to it, it is purely a passion purchase. 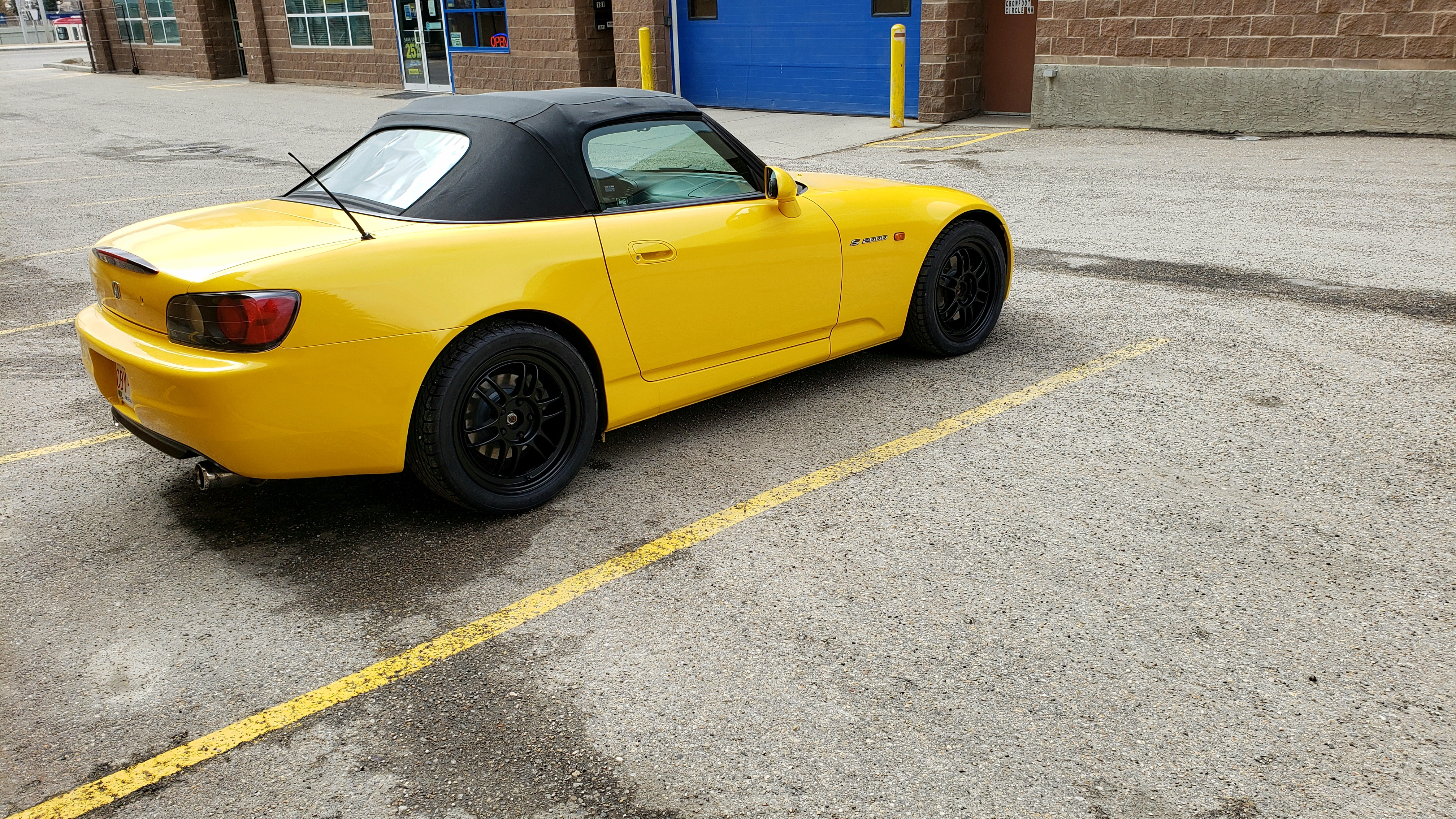 It was basically stock when I bought it with just a cold air intake (lol) and shoddy aftermarket head unit installed. And as of right now the only mods I have done was replace the shoddily done aftermarket head unit and the Enkei RFP1s with fairly aggressive summer tires. Future modlist is not set in stone, but includes aftermarket headlights/taillights (depending on if I like their design and availability), lip kit (though the garage I park already nearly scrapes at stock ride height so iffy on this), exhaust system (if I find one that sounds real good to me) and change over to a glass rear windscreen on the convertible top (mostly for drivability reasons). I don’t intend to do major power mods just yet… But if I do it would be a supercharger. I don’t want to mess with the power response the F20 has, but some more torque would definitely be nice. 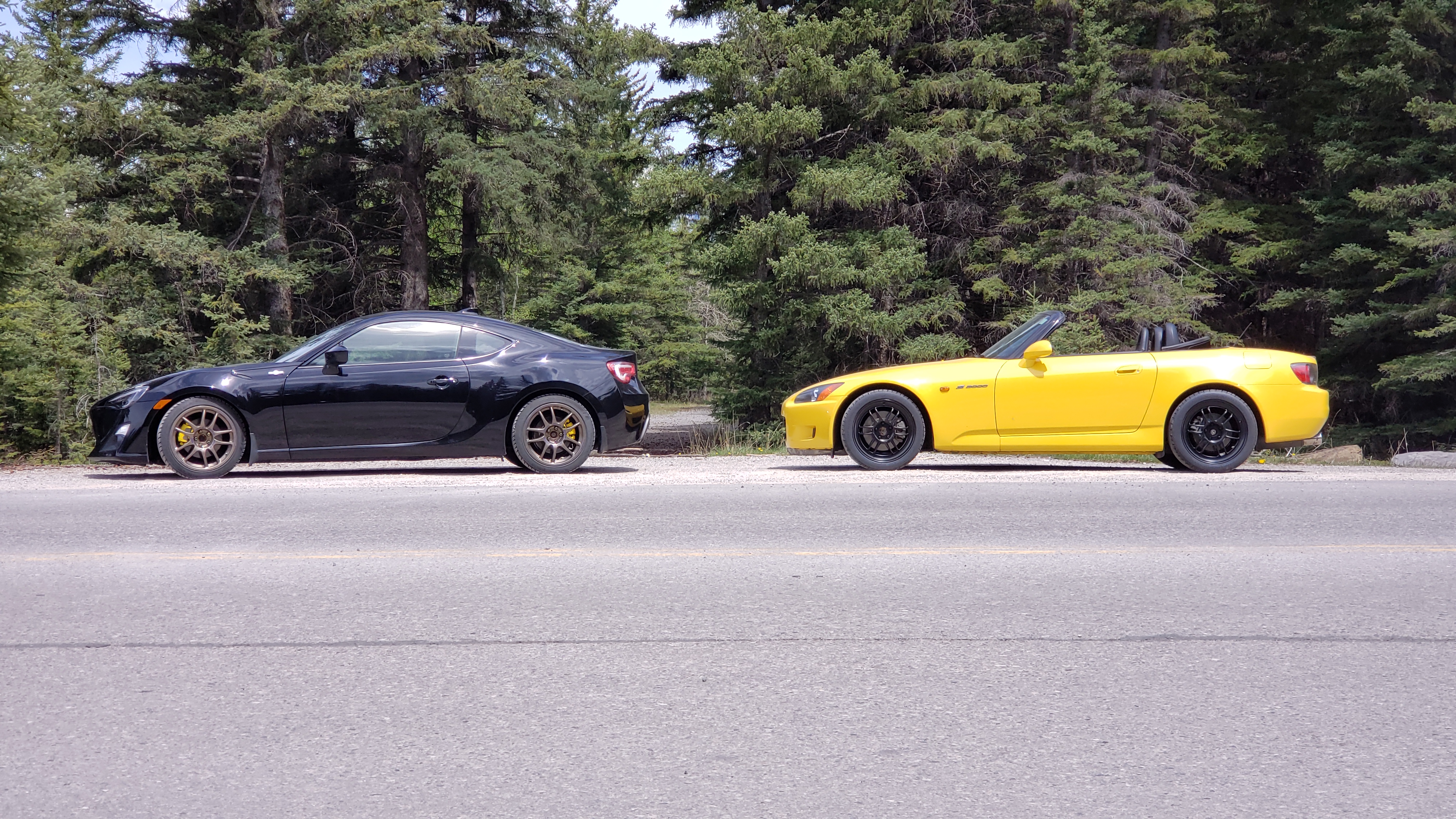 Now, how does it drive?

Great, its a S2000. You can probably get a better driving review from someone else. But I will give some comparisons to 3 cars I have also driven:

Compared to a Scion FRS: They are very similar vehicles. Down to how the manual behaves, and just overall balance and… lack of torque. Interesting enough, the S2000 is more comfortable in my opinion, mainly down to the seats and default suspension tune of both cars. That said they’re both very responsive, balanced sports cars. They also both do ‘slow car fast’ rather well, in that they’re just fun to drive without going fast. But I will say this controversial opinion: The S2000 is better in that last point because it is a roadster. The FRS however, does get goodies like traction control, an interior not from the late 90s, a trunk that’s not awkwardly designed and rear seats that fit small humans.

Compared to a Mazda 3 (2013): Completely different cars but just a quick comparison since I go back to back between this and the S2000. The Mazda is far more quiet and actually has trunk space. In terms of driving feel, the Mazda 3 is not bad. But the S2000 is a go kart in comparison in terms of responsiveness. So if you’re wondering how a ‘normal car’ compares, a S2000 is like adding go kart properties and reducing practicality.

Compared to a Mercedes-Benz E55 AMG: Funny enough, the only other car I’ve pushed to… I won’t disclose but near its top speed. But there’s a very important comparison between these two cars… in that the E55 AMG going fast was absolutely effortless. Automatic, comfortable, usually quiet and accelerates like hell. Like most modern sports cars, I would think. Also ridiculously stable. And that brings to what a lot of people don’t get about lower powered, lightweight sports cars. The E55 is easy to get to silly speeds, but you don’t feel fast until you’re doing double the speed limit. The S2000 going just about the speed limit on the twistier roads, it still feels fun. In terms of luxury and comfort they’re nowhere close to being compared, but as cars that are fun to drive… I think there was a point to be made there. 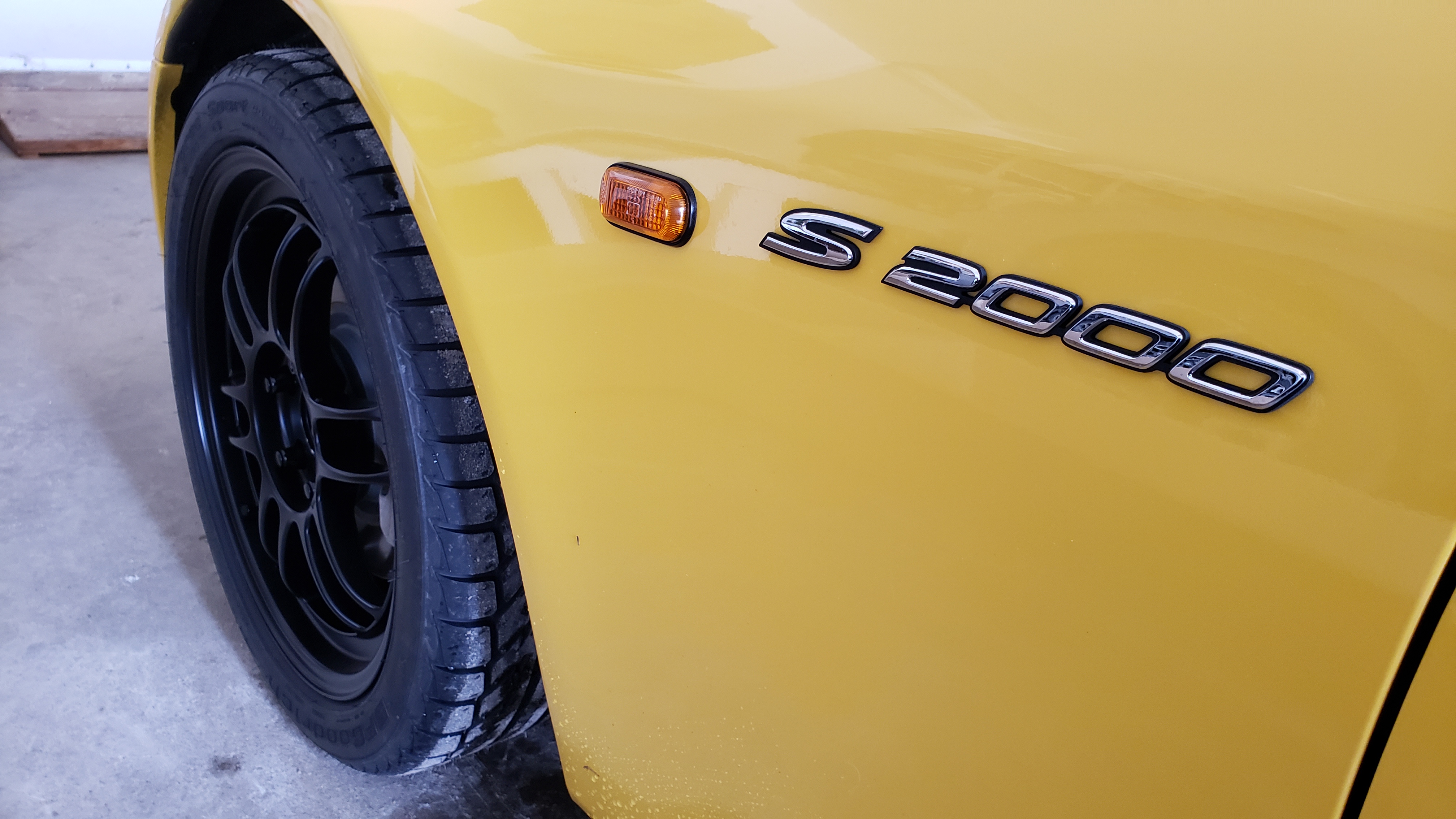 Fun fact: I nearly got this stuck on a tiny strip of snow that was maybe 2 cm thick in front of the garage where I park. Yup, never putting it through winter.

Went on a large cruise/ car meet yesterday. I don’t have many pictures so here’s two. 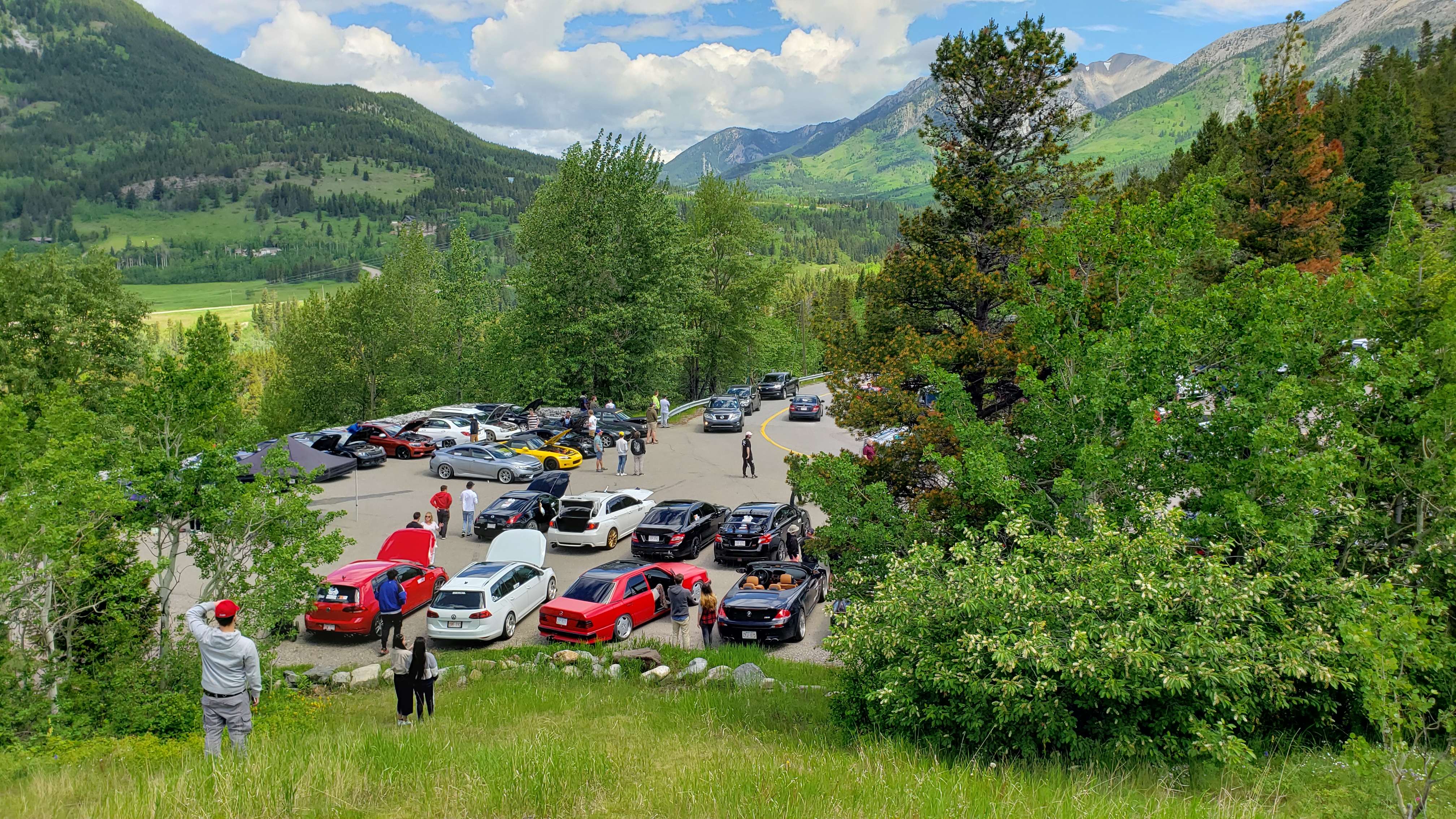 I can say it’s not my crowd really, but it was interesting. Only 6 cars out of supposedly 300 that signed up (idk how many actually showed but definitely less than 300) got pulled over for speeding. Not myself, even if many more digits of my speedometer was used compared to usual. And social distancing was uhhh… Attempted by some of us. I left with my friend pretty early on before things got too crowded. 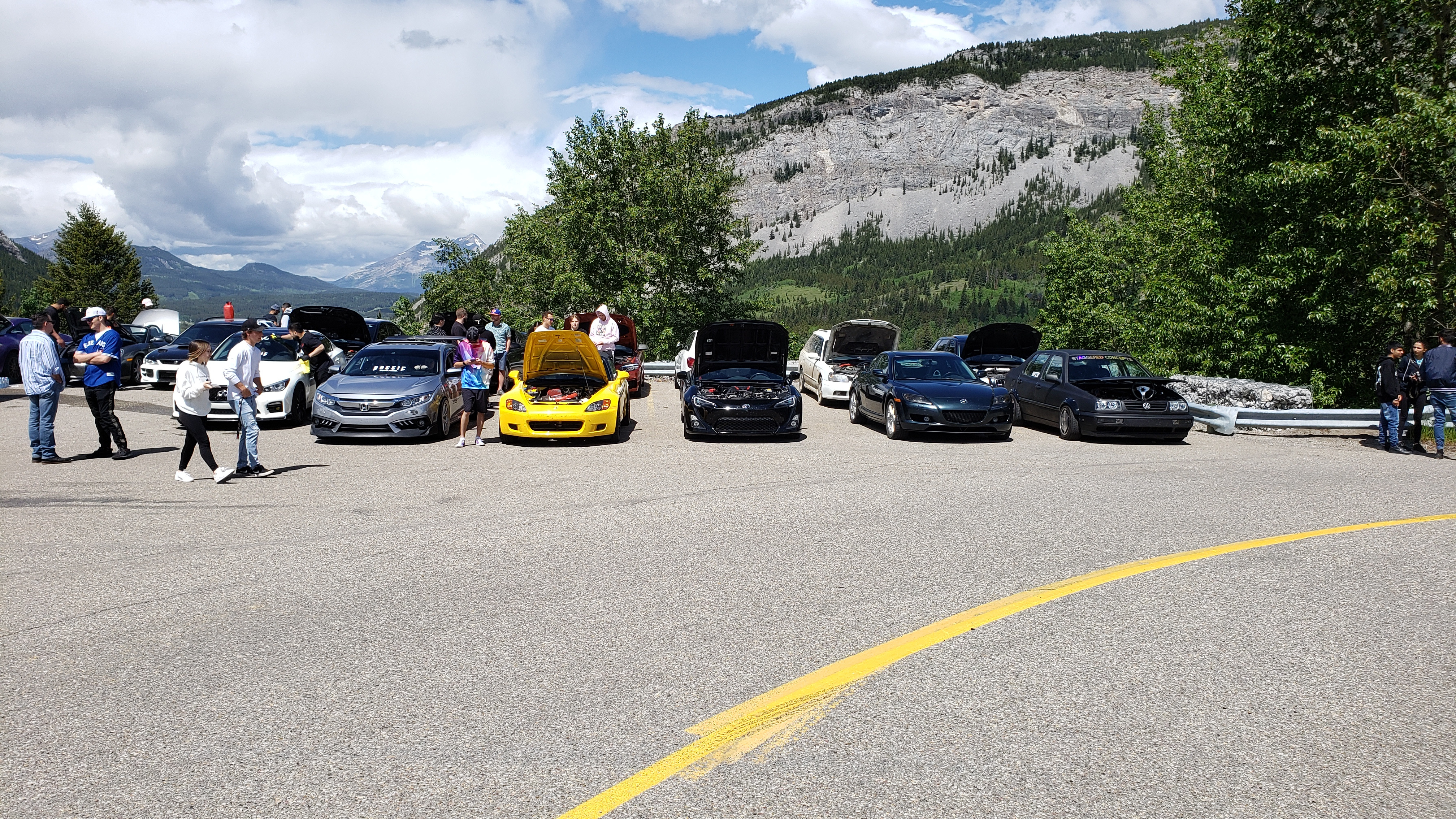 Also unlucky damage came to my windscreen, when getting onto the highway… 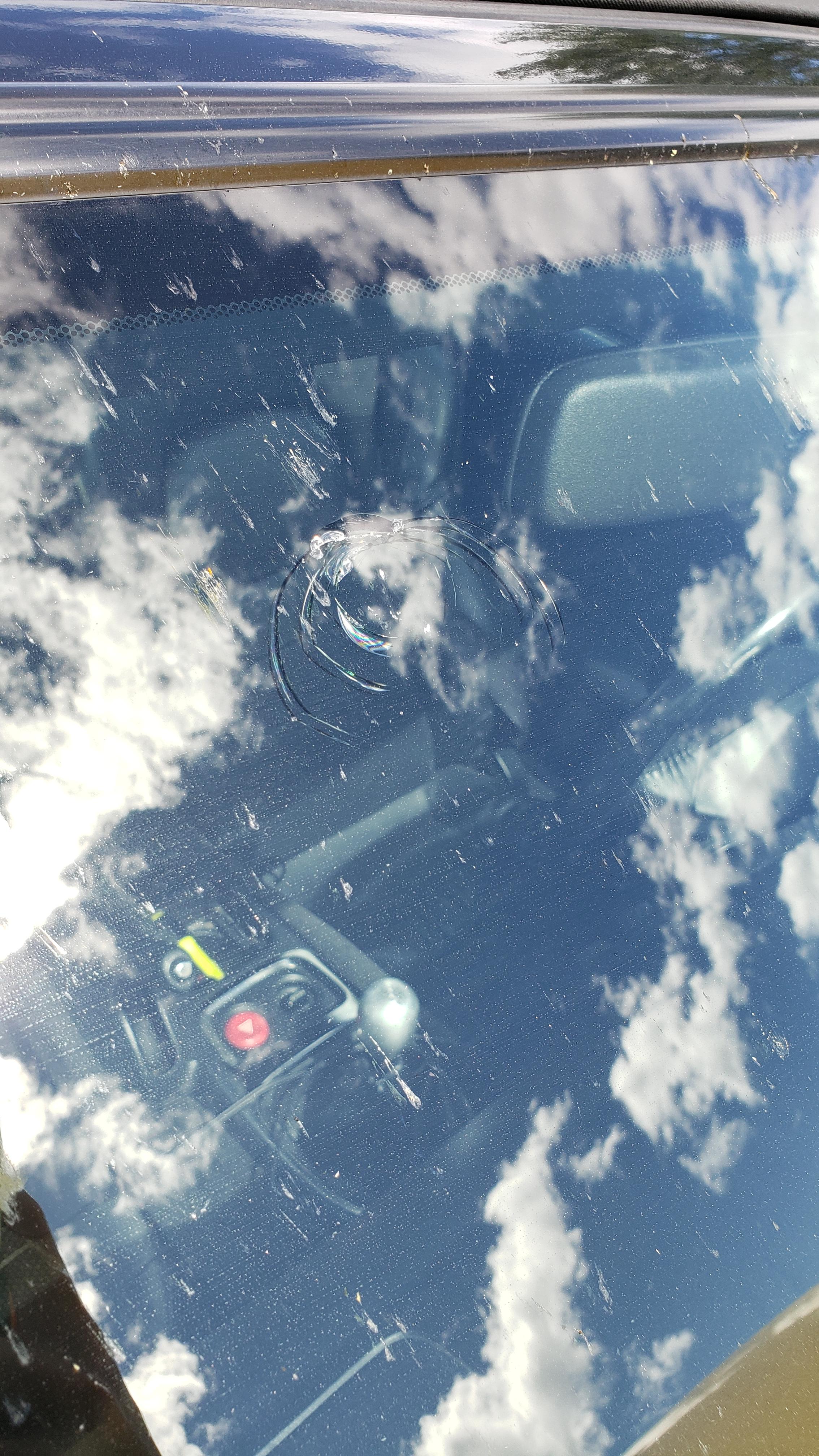 Given that the S2000 is the kind of car that nobody, not even Honda itself, will ever be able to build again, buying and owning one in the first place now seems like one of your best decisions yet. With the best examples now appreciating in value, I expect you to enjoy every mile with it for many years to come.

Honda seemed to me an ordinary car. It feels like it’s a very budget car.
You probably didn’t have a goal to buy a regular road car, but it did.
Rear-wheel drive teases you, but you lack acceleration for complete enjoyment.
In it, I prefer the yellow color and the feeling that this car is quite powerful. And that’s all. He also does not reach the muscle car, so it is definitely better to order a turbine and weight relief. Although I think you should not do this, because you are driving dangerously.
But I really liked the Mercedes E55 AMG. He personifies the hellish concentration in the nodes, which the Germans are very good at assembling in their technique. Therefore, Mercedes was my dream in childhood. But when I grew up, I thought it was better to save and not spend on cars that just eat up your capital. Even if you sell it, you will lose a lot. But I would still lighten this car a little, although in that case, it could become more dangerous at 250 km / h, so it’s better to remain heavy.
If it was yellow, then it could not even be sold.

I have no idea what compelled you to write what you wrote, nor did I understand the majority of it as you seem to have passed whatever that was through six layers of google translate before posting it. Please kindly do not comment on this thread again. Thank you.

Look at his thread for slightly more context.

If my 90hp Miata can still make me giggle after 5 years of ownership, i am pretty sure the S2K will do that even better

Honda seemed to me an ordinary car. It feels like it’s a very budget car.

You probably didn’t have a goal to buy a regular road car, but it did.

In it, I prefer the yellow color and the feeling that this car is quite powerful. And that’s all. He also does not reach the muscle car, so it is definitely better to order a turbine and weight relief.

I take exception to much of that.

First of all, the Honda in question does not feel ordinary or like a budget car in any way - it was created mainly by engineers, not accountants.

Also, since when did anyone consider an S2000 to be lacking in acceleration? It may be outgunned by more modern machinery, but I think it’s still fast enough for today, let alone 20 or so years ago. And it remains one of the best rear-drive performance cars you can buy on the used market at realistic prices.

Finally, while it may be tempting to give it more power and especially torque by bolting on a supercharger or turbo kit, you’d disrupt the car’s balance between thrust and handling by doing so. Besides, the S2000 is already light enough as it is, so it’s not essential to reduce weight even further.

There is, however, one thing in your frankly misguided comment that I can agree with: I definitely like the looks of an S2000, especially in yellow, which clearly makes it even more striking.

bruh I don’t know what do you said, m8

Flag it and let’s move on, I don’t want my RL car thread cluttered with a bot’s random ass algorithms on how enjoyable a car is to a human.

yellow is a great colour for an S2000. would you like to get a hardtop?

The figures do not lie, but you have failed to grasp that raw power and torque (or even power-to-weight and torque-to-weight ratios) alone do not necessarily make a great driver’s car. In fact, if I were offered a choice between an NA MX-5 (with either engine, mated to a manual gearbox) or a W211 E55 AMG, I’d take the former every time - a car with a well-sorted chassis, in perfect harmony with a suitable engine, is a much better option than one focused (almost) solely on straight-line pace.

@DukeOFhazards a hardtop on an S2000 is nice to have, but not a must-have - I reckon the standard soft top should be adequate even in cold climates.

I personally don’t plan to - it’s a summer car for me plus I like being able to put the roof down.

That and the hardtops I like are really expensive. The Spoon one is at least 5k for where I am. 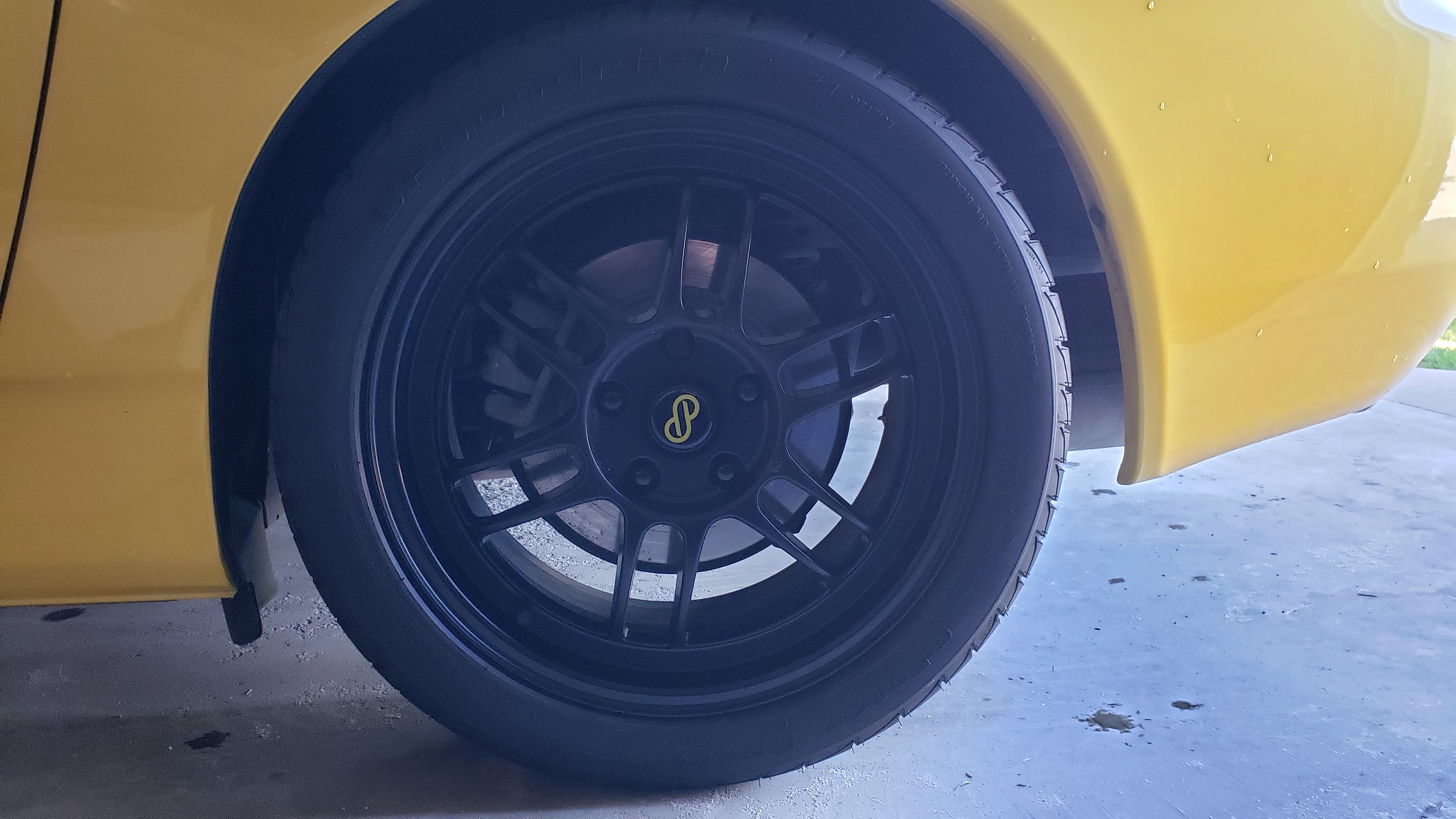 Also a drive out with some friends. Unfortunately basically all the back roads here are filled with crossovers that drive 20 under all the time so weekend driving is less enjoyable than it could be. At least it’s not hailing like last month. 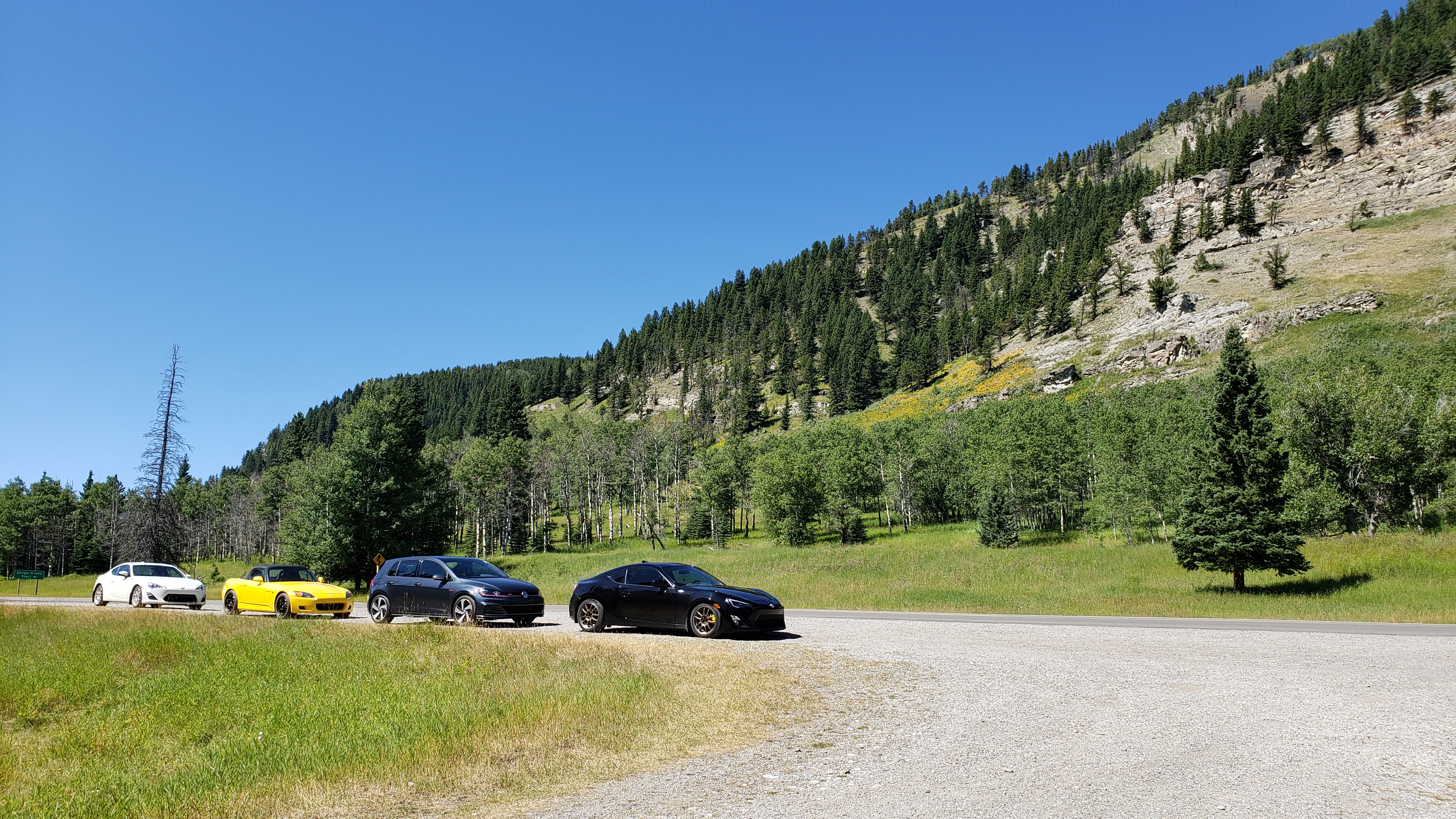