So ever since I returned back to the UK, it was instantly time to look for a first car. Needed something manual, easy to drive and reliable.

Looked at a few other cars, including a 900 quid Mazda2 that had been in an accident and repaired by drunken cowboys.
Ended up choosing between this or a 2012 Volvo C30 1.6 diesel, a more expensive car which honestly didn’t have much over this.

So here’s my first (or second) car. Being a 2.0 litre insurance costs about an arm and half a leg. But at least it’s something I can run until it gets legislated off the roads.

Pic before picking it up: 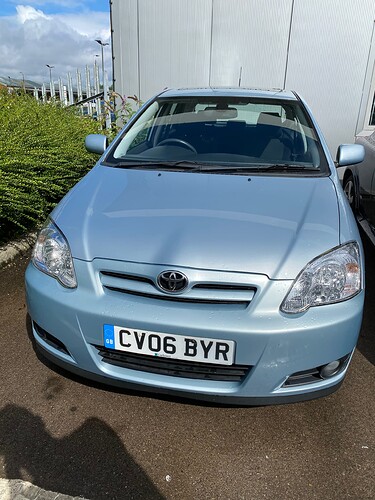 One I took more recently of it next to one of the weirdest looking cars.

Being a somewhat modern Corolla, don’t expect many updates.

Nice!!! Pretty clean example too. The C30 may of been a bit more unique but the corolla is a solid choice. Enjoy it!