Being a 16 year old, I can’t actually drive my car… but I can ride a 50cc bike.
Long story short (for those who don’t use the IRC), I bought an Aprilia SR50 back in the end of September or so, got delivered to me a couple weeks later and it wouldn’t idle properly. After breaking down 3 times and them trying to “repair” it (cutting the cat off) I decided I didn’t want to deal with them anymore and got a full refund and went to Yamaha the same day.
1 week later I have my Yamaha Aerox R.
'Tis a 2 stroke, water cooled 50cc with something like 4 furious horsepower. Come next Monday I’ll have been riding it for a week, and I have to say it feels much more refined than my Aprilia did.
I’m not gonna work on this bike, it’s just going to be my main mode of transportation so this thread is likely to just be a picture dump of stuff that I get up to.

I don’t have any proper photos of it currently, so this will have to suffice for anybody who’s actually curious 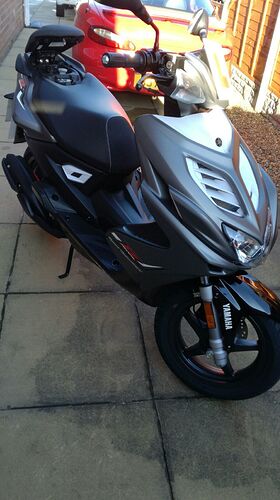 Just after my first ride out on it: 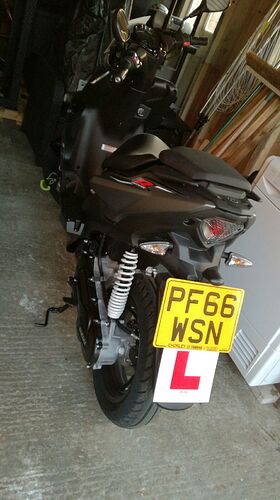 Aaaand finally, I took this photo today just because I thought the mud on the white spring looked cool Yay for another rider in the forums

You replaced the Italian POS?

Unfortunately, yes. It was good while it lasted… which was never.

though i really thought even with 50cc. a 2 stroke could output MUCH higher power than that

Kawasaki Ninja 150R are a 150 2 stroker that makes something like 40-42hp on the last version. which was maybe this year’s? it just got discontinued though

Well, my Aprilia had, apparently, 6-point-something horsepower. Even though this apparently has less horsepower, it does actually feel faster. Maybe worth noting that the Aprilia was air cooled and the Aerox is water cooled.

As for regulations, I don’t THINK they’re limited by horsepower, but they are limited to a top speed of 30MPH. My Aprilia was derestricted for a short while before it broke for the final time and it topped out around 45.

feel faster?
i think that may have to do with the fact that you’re on a cvt. cvt does make your bike feel lighter and snappier.
but i dislike the usual package they come in. matic cubs, just like yours. they’re everywhere. the chassis flexes to much at speed. (the road conditions are worse here). i DISPISE them. they feel uncontrollable.

The power output between them was similar anyway, despite the RS being discontinued in 05.

but i betcha the RS50 would’ve been much more fun

but that’s what i’m doing everyday
although only 4 gears. i need 3rd gear to get to 50km/h or 30mph just on the limit of 2nd gear though.

I’ve not really gone out and taken as many photos as I’d have liked in the past however many months, but I have been using it daily for a long time now and I’m glad to say it’s not let me down like my previous Aprilia did. I’ve covered just over 450 miles now and I expect to have covered roughly 1000 by the time I turn 17, at which point I’m 99% sure I’m going to get a 125. I’m not set on anything, but I’d love a simple bike like a YBR 125, but at the same time I’d love something fun like an MSX125/Grom.

Unfortunately, I did lowside off it once coming out of a carpark, of all places, and I did manage to mess up the whole underside of the thing, but I didn’t hurt anything crucial to the operation of the bike. I got those parts replaced at the cost of something like £120 and I got an £80 service (extortionate, Yamaha main dealer) but to be honest, I will say it’s made me a better rider. I know what the bike can and can’t do, and I’m usually a lot less willing to push it too hard…

…Except the fact that it’s been sunny all weekend and I decided that I must get out and enjoy the weather on my bike while I could.
Now, people may mock 50 cc bikes/scooters for being slow, which they are relative to pretty much anything else on the road, but that doesn’t mean you can’t have fun on them. You’d be very surprised at how well a moped can take relatively sharp corners at 35MPH

But anyway, one of the reasons for going out was also to get some photos with my trusty Canon 450D, so I did. I took a few, but most of them came out kinda poor. There was a lot going on in the background, and they didn’t really live up to my expectations. More stuff to come in the future, hopefully.